We talk with Desiree Page about how criminal statistics pushed her into arboriculture, how HECO manages power lines and trees, and why trees grow up so fast in Waimānalo. 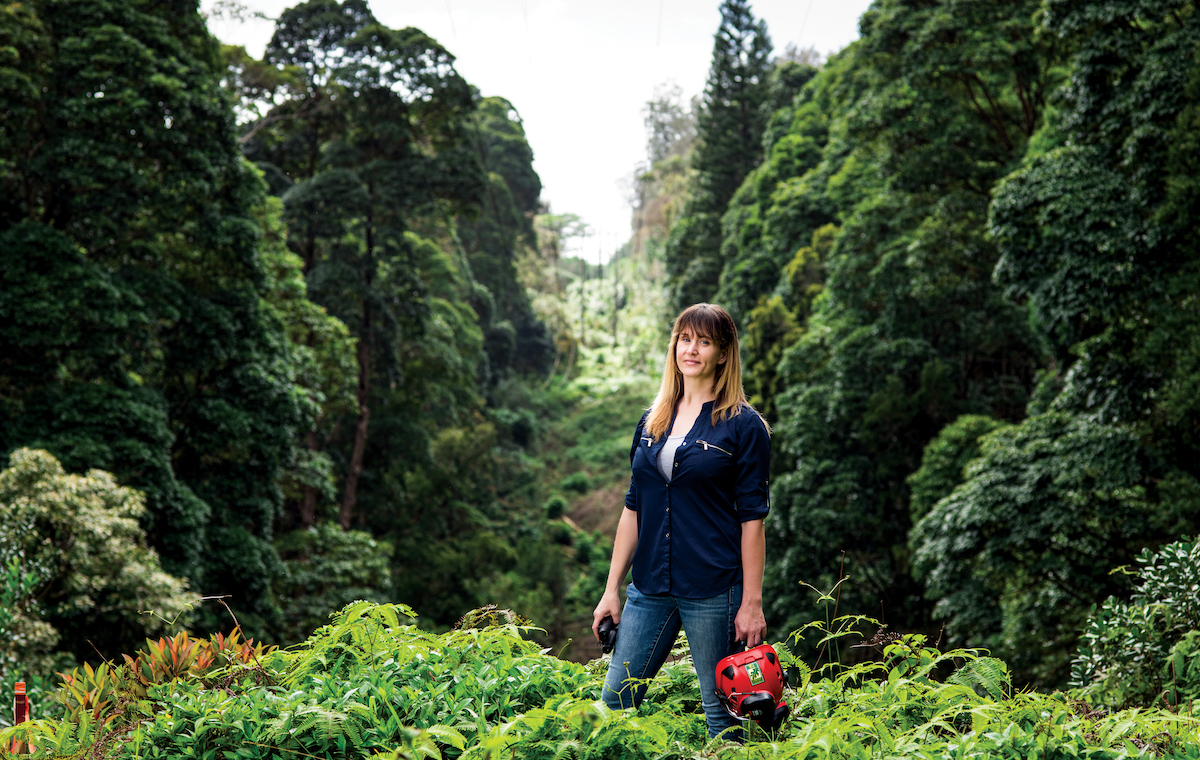 In our February cover story, we delve into the importance of urban trees and some of the people and organizations growing Honolulu’s urban canopy. We also explore some of the trees deemed exceptional since the state established the Exceptional Tree Act in 1975. Along the way, we spoke to many arborists—they didn’t all make it into the story, but in our online Life of the Tree People series, we explore what a life caring for trees looks like.

Desiree Page is president of the Aloha Arborist Association, a network of tree stewards, and a system arborist with Hawaiian Electric Co. In Illinois, she grew up with a northern pine tree on the side of her home, which was built in the early 1900s, and wondered: Did they build the house around the tree, or did they plant the tree around the house? In the summer, the tree would keep the house cool with shade, and in the winter, the leaves would drop and let the sun in. “That tree is ancient, and you just got to wonder, how long have you been there, how long are you going to stay?” she says.

These days, with HECO, she’s constantly checking in on trees: trees near power lines, trees near potential new pole sites, outages perhaps caused by trees, customer concerns about trees, and trees undergoing routine maintenance by HECO crews. HECO doesn’t own any trees—it only has “the right to clear it away from our lines and protect our lines,” Page says. She sees tree trimming in line with conservation, particularly in an urban setting: “When your resource is the urban forest and you know people don’t like trees because of branches falling, trimming trees is exactly conservation.”

HONOLULU Magazine: How did you become an arborist?

Desiree Page: When the ISA (International Society of Arboriculture) began arborist certification, my dad was one of the first hundred people in Illinois to become a certified arborist. I started dragging pit brush for him—basically cleaning up the ground while he was climbing and trimming—when I was 14. When I turned 17, I started actually climbing. In college, I thought I wanted to be a cop, but for most of my classes I was staring out the window, because I was on the grounds department at Western Illinois University and I worked for the tree crew there. And in between my classes and after I was finished with my school day they would pick me up in the little Gators and tractors and we’d go to work. Finally one day in a criminal statistics class—there’s something about criminal statistics that brings out the bigotry in people—I just thought, “Oh my God, what am I doing here?” So I switched to ag science with an emphasis on urban forest management as my major.

HM: What do you like about being an arborist?

DP: Oh man, what don’t I like about it! Have you ever seen the redwoods in California or the live oaks in Georgia? There’s something about a big tree—there’s just an experience in it. For me there’s this recognition that this thing has the ability to live forever, possibly. When we think we know the life span of any given species and then eventually somebody cuts one down that’s much older than that, it’s like, oh, I guess we’re wrong.

HM: Do you have a favorite tree in Hawai‘i?

DP: There’s a really cool one in Mililani by the skate park—a monkeypod with a really interesting form. It looks like if you were to hold your hand out like you’re asking for money, and stretch your fingers upward toward the sky.

HM: Is there any particular kind of tree that gives you guys at HECO a lot of trouble?

DP: It tends to be ironwood, eucalyptus, shower trees and haole koa—fast-growing species in residential areas that are hard to prune back far enough in a way that’s healthy for the tree but also so it will not grow back into the line before we get there. We try to prune every tree (near power lines) once every two years.

Albizia to an extent hasn’t caused as many problems as you expect, but it is a problem because their brittle branches tend to break and blow in the wind. And they will land on our lines from outside of our clearance areas.

In Waimānalo, the runoff from the farms has a lot of fertilizer, so all the trees grow fast. Haole koa is a huge problem in Waimānalo—they grow from seedlings up into our lines really, really fast because of the fertilizer runoff. But haole koa isn’t really an issue in Waiʻanae, it’s kiawe. It’s more of a slow-growing tree but it’s just growing really close to the lines there.

It’s not the tree that’s the problem—it’s the situation that’s the problem. It really is. We say in the industry: right tree for the right place. When you plant a tree, make sure you put a tree in a place that’s appropriate for its growth habit, for its structural weaknesses, all those things. So putting kiawe in too close to lines is a horrible idea. Any tree under the line is a horrible idea, especially mango trees—people want to pick the fruit close to the line. 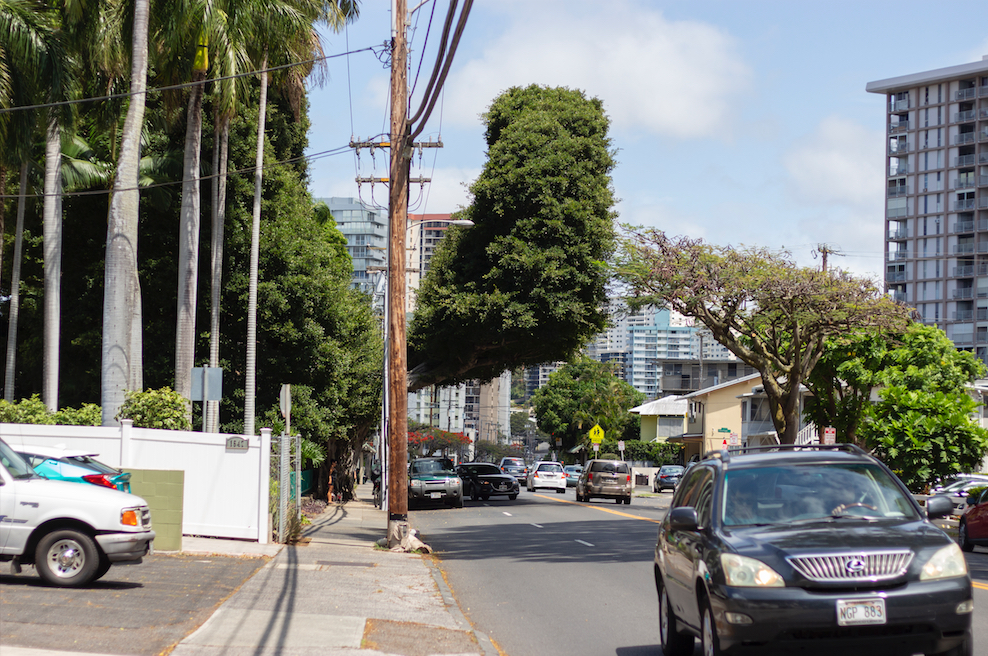 HM: Can you tell me about this tree on Wilder?

DP: There are a couple of residents in the area that hate that tree. And I don’t and HECO doesn’t.

This is a through prune—it’s actually best case management in a lot of situations. There’s one in Hale‘iwa, too, where the tree is trained into a circle [around the power lines]. It’s directional pruning. We’re basically training the tree in the direction away from the line without making cuts that are going to result in unpredictable regrowth. If you make top cuts, where you cut all the leaves off so that there’s nothing photosynthesizing, they tend to regrow unpredictably and shoot out branches in all directions. But what’s going on there is we’re going to keep the [branches] on either side of the line and it’ll stay straddled.

We get a lot of the neighbors calling and they don’t like the tree and they want us to ultimately lay down the gavel and say, “This tree’s got to go.” But we don’t have the right to do that. We don’t own that tree, it’s not our property. We only have the right to clear it away from our lines and protect our lines.

It’s an interesting situation because it’s growing out of the wall. It’s growing on the wall, over the wall, off the wall. The tree was obviously planted by the building as part of the landscape. It’s a beautiful tree. But it’s also on the sidewalk, which belongs to the city and county, so technically it’s a jointly owned tree. I bet the property owners value that tree for a lot more than just aesthetics—it’s part of the landscape, it’s protecting the koi in their koi pond and probably saving them energy costs in cooling.

Luckily, these are situations where we get to keep the canopy and maintain power. Humanity is better because the tree gets to stay—it’s a resource just like electricity, in cleaning our water, in cooling [the city]. So Hawaiian Electric, we’re providing energy, and that tree is also providing a service to all the people here.

Read more about Honolulu’s disappearing trees in the February issue of HONOLULU, available on newsstands and in our webstore now.