Plus, more news from the state’s only sake brewery: It’s moving to Hawai‘i Island.

It’s two years since Chiaki Takahashi and Tama Hirose brewed and pressed their inaugural batch of Islander Sake in Kaka‘ako. That muted debut at the outset of a global pandemic, supply chain delays and a steep language barrier might have derailed even the most experienced of entrepreneurs. But these two had other plans. 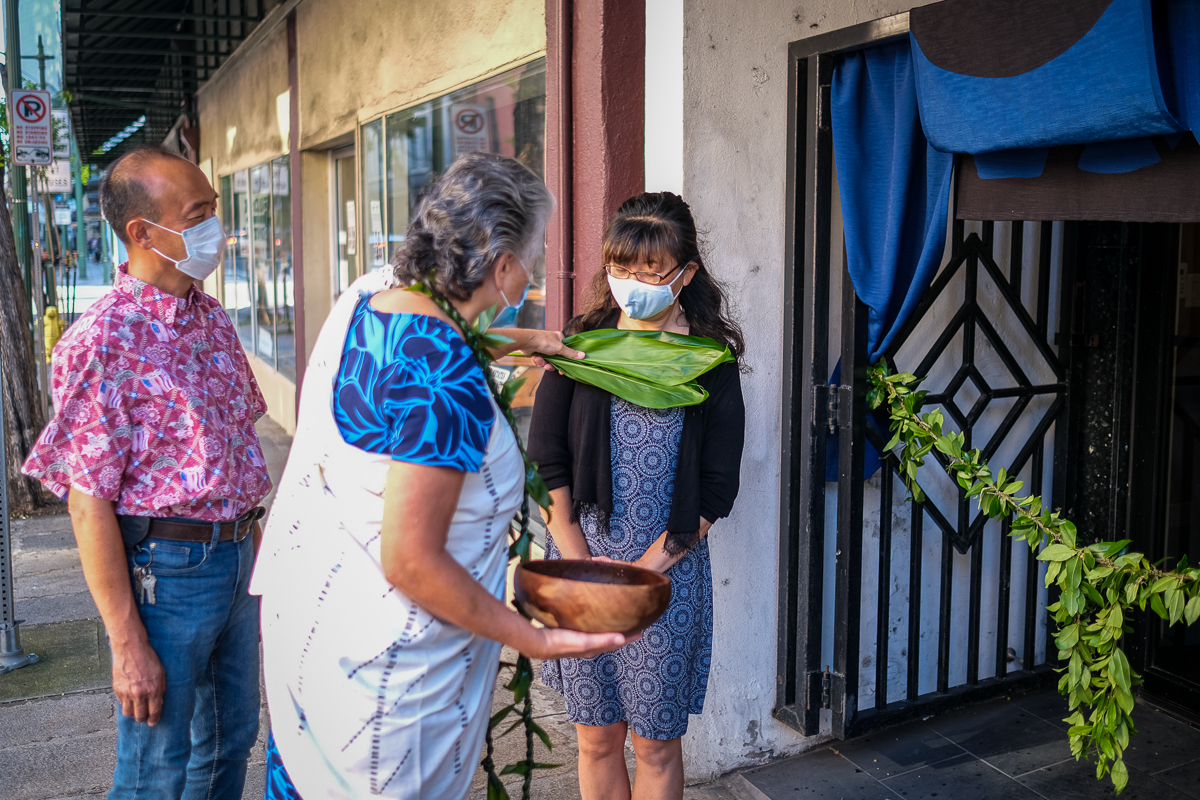 This week they open Hanale, an eight-seat omakase sushi counter and restaurant in Honolulu Chinatown that is the first step of an ambitious two-part expansion. Although we’ll miss the intimate and breezy vibe of Islander’s now-closed tasting room on Queen Street, Hanale marks a new, elevated base for the brewery’s restaurant operations.

Beginning this Thursday, Feb. 24, veteran sushi chef Tetsuzo Yao will prepare an 18-course omakase blending sake-friendly appetizers with nigiri sushi, soup and dessert—an upgrade to the nigiri-focused menu he served at Queen Street. The only catch: You’ll need to bring your own booze until Hanale gets its liquor license, but you won’t be charged corkage if it’s Islander Sake. 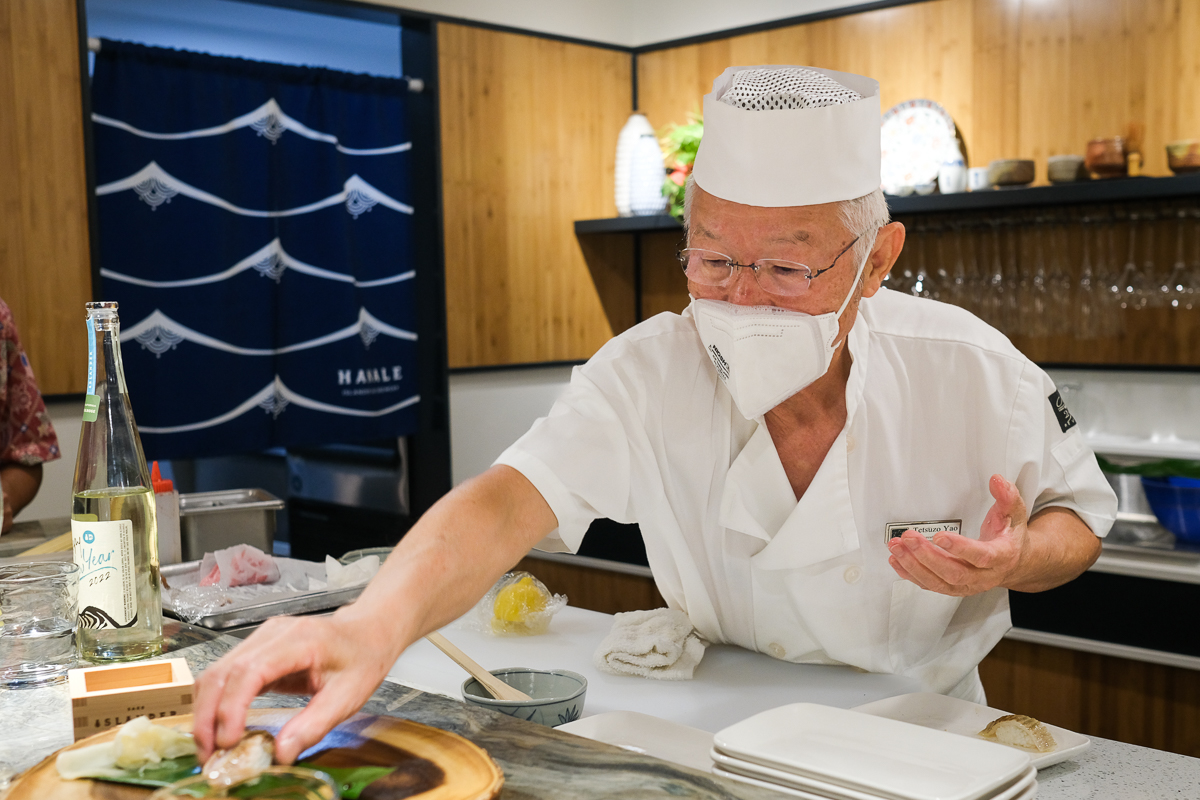 Reservations for the new restaurant are absolutely required and can be made online. Although the brewery is on hiatus for now, you can purchase Islander’s remaining stock at the Sake Shop, Bottleheads in Kailua, Village Bottle Shop and other places. You can also order the sake online from Kaka‘ako Wine for delivery to Hanale, making for a convenient—although roundabout—way to acquire sake to enjoy with dinner. They even offer a pairing flight with five half-size bottles for $109.99.

I was invited to try the new sushi omakase ($120) following the Hawaiian blessing of the restaurant near the main branch of Hawai‘i National Bank in January. Our meal starts with an amuse-bouche: vibrant lobes of Hokkaido murasaki (purple) uni on matchsticks of mountain yam and nori with a dab of freshly grated wasabi. If this is any indication of what’s in store, we’re in for a treat. 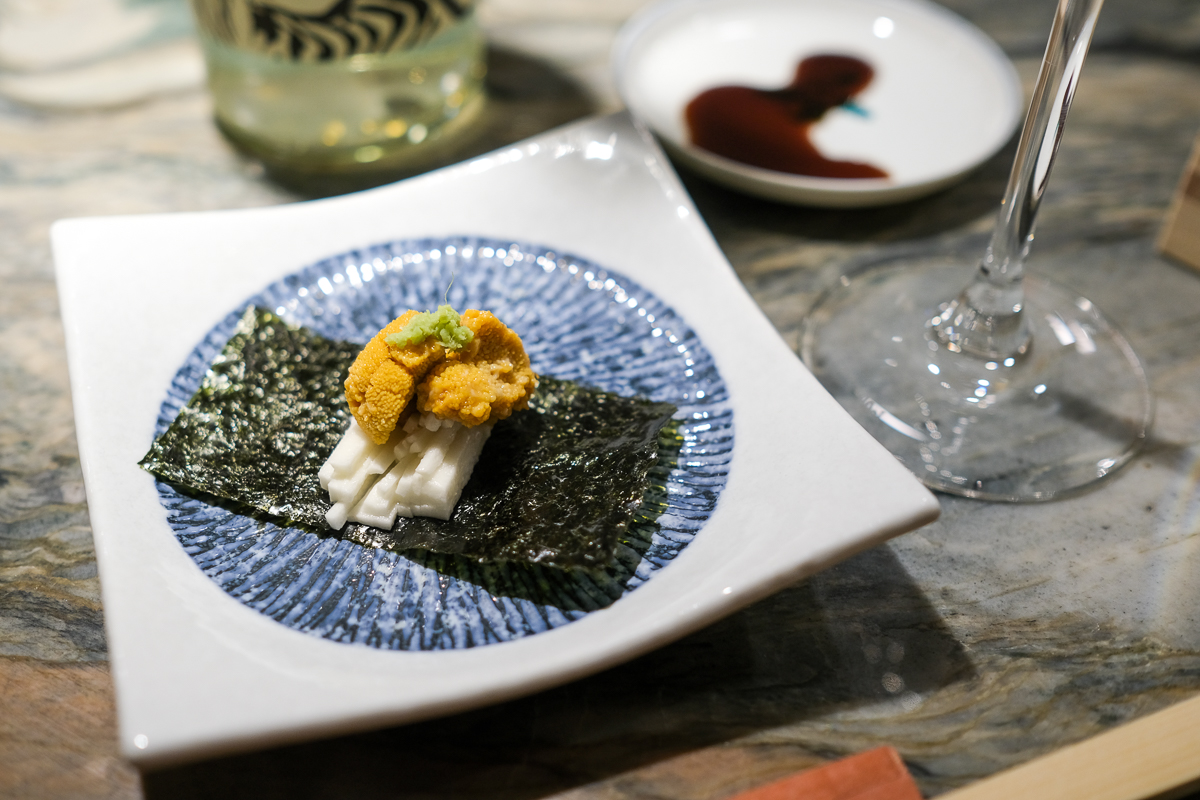 Hirose pours us a glass of Islander’s Kitashizuku junmai daiginjo flecked with gold flakes, a limited edition sake for the new year. Smooth and elegant, this is the brewery’s premium product; it follows our first few bites.

Winter is by far the best season for seafood from Japan. Yao primarily sources his seafood from Toyosu Fish Market and has received some gems in this shipment. A slab of aburi (seared) otoro is next, kissed by just enough heat to bring some rendered fat to the surface, and finished with charcoal sea salt.

Changing it up, we’re served a simple salad of soft Aloha Tofu over mesclun greens with sesame dressing. It might be filler, but it’s composed in such a way that I’ve been recreating it at home. 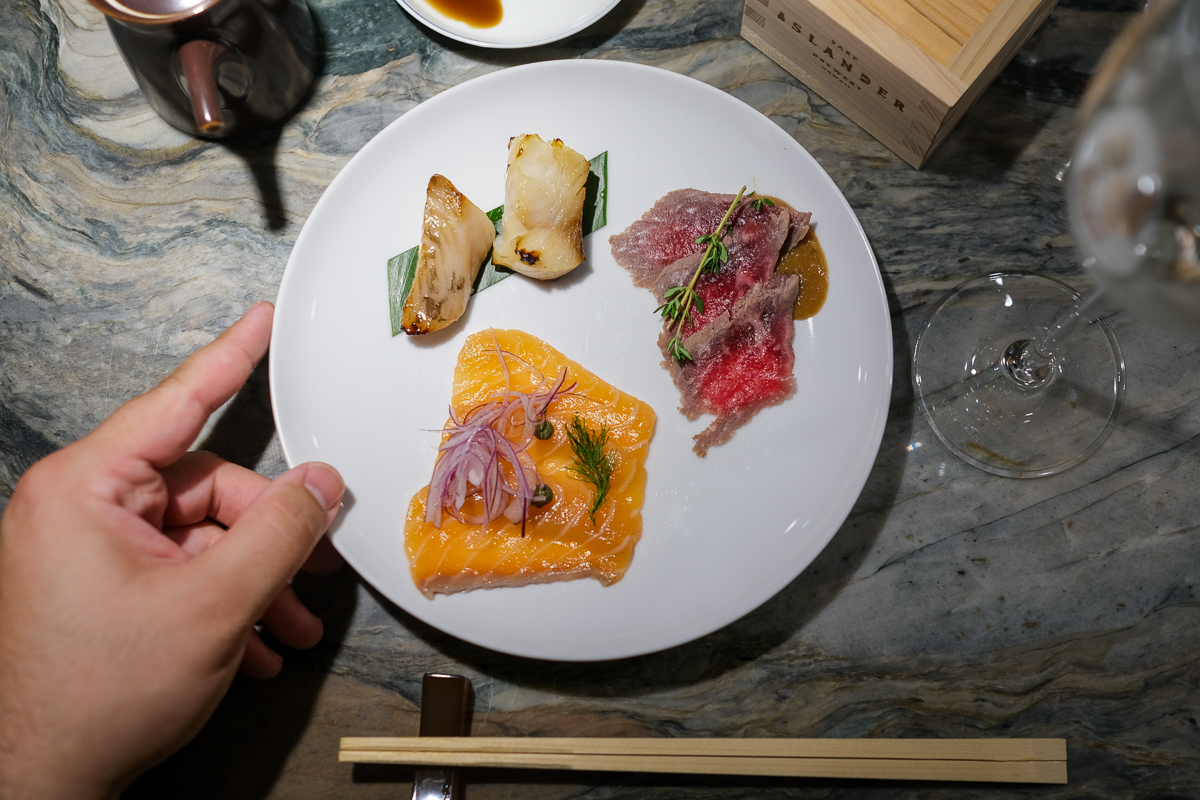 An appetizer plate of smoked salmon, washugyu seared beef tataki with garlic miso, and misoyaki butterfish marinated with sake kasu arrives as Yao prepares wooden pedestals for our nigiri. The counter at Kura Kitchen, as Islander’s old tasting room was known, was not equipped for a sushi bar, forcing Yao to compromise to make it work. With Hanale’s bar designed to his specifications, he’s better positioned to prepare a show and serve nigiri by the piece, making it a much better experience on both sides of the counter.

Between courses, Hirose pours glasses of Islander’s junmai ginjo made with special strains of Japanese yamada nishiki and California Calrose rice, which we learn are grown specifically to make sake. Yes, the same Calrose rice we grew up eating for dinner was derived from a rice strain cultivated for sake. Islander’s take is surprisingly smooth with a dry, savory finish that settles nicely with nigiri morsels of rich, seared engawa and unctuous, sweet unagi. 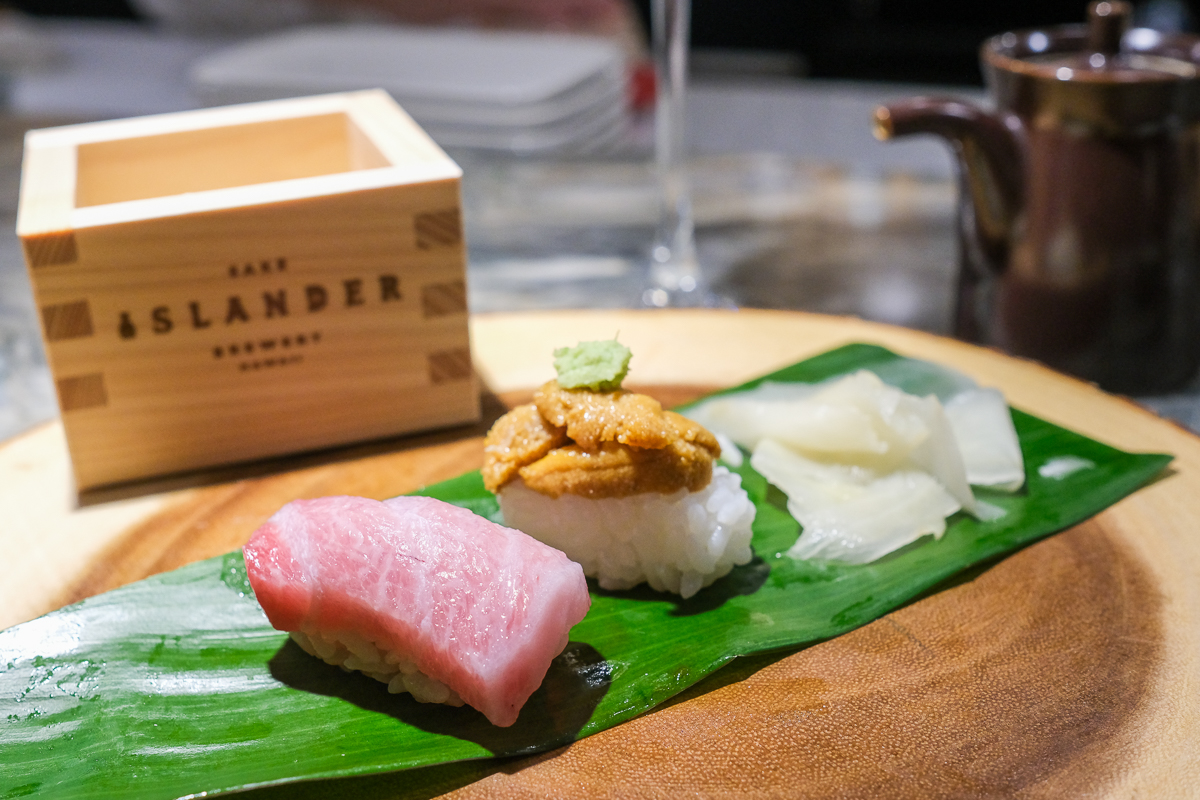 If you had Islander’s pairings at Kura Kitchen, you know the taste of fresh sake newly brewed and pressed in the next room. That aspect of Islander’s offerings is on hold while Takahashi and Hirose push ahead with the second part of their expansion: moving the brewery to the Big Island.

Hirose tells me they initially planned to set up operations there first, but could not find a suitable site. This year, they found a plot near Kōhala and are now building a brewery projected to open this summer. Takahashi and Hirose cite the quality of Hawai‘i Island’s water and clean air as ideal for imparting the essence of Hawai‘i to their sake. But these are only part of the equation: It takes hard work and true grit to make anything succeed, and Islander’s perseverance demonstrates they have these.

After more rounds of vinegared sunomono side dishes, soup and nigiri, the last either torched or simply anointed with shoyu, we are served dessert—a strawberry sake kasu cheesecake with raspberries. Prepared by Takahashi, the brewmaster, this humble slice brings me right back to the cozy feeling I experienced at Kura Kitchen. Knowing it has carried over to Chinatown puts my mind at ease. 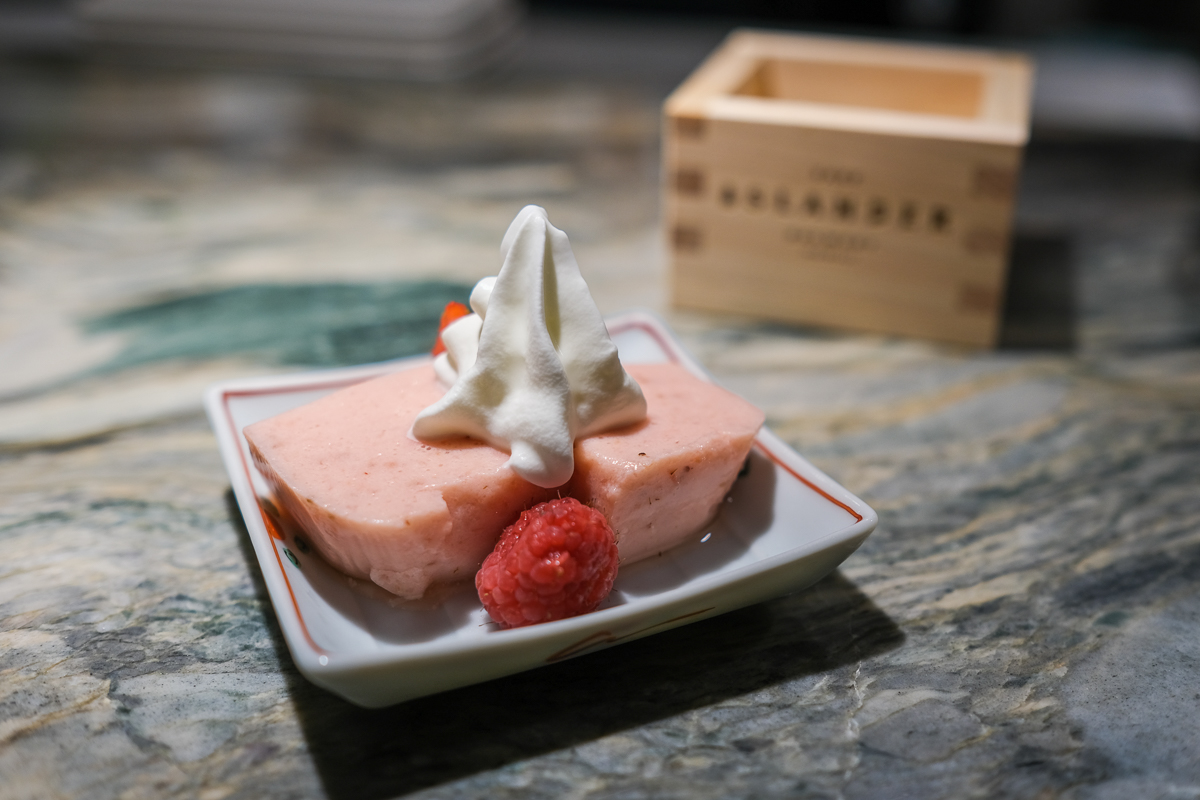