Think of it as a one-stop poke convenience shop.

Distractions abound the first time you walk into Paradise Poke. There are the vibrant oranges, magentas and greens of pickled mango and soybeans in chill cases on the right, imported snacks on shelves to the left, trays of musubi in the morning. And there, in the middle, is the poke. Until today there have been up to eight kinds; starting from its grand opening on Saturday, July 10, the shop promises a dozen varieties of poke every day, along with a beefed-up daily menu of hot plates, chirashi sushi bowls and sashimi trays. 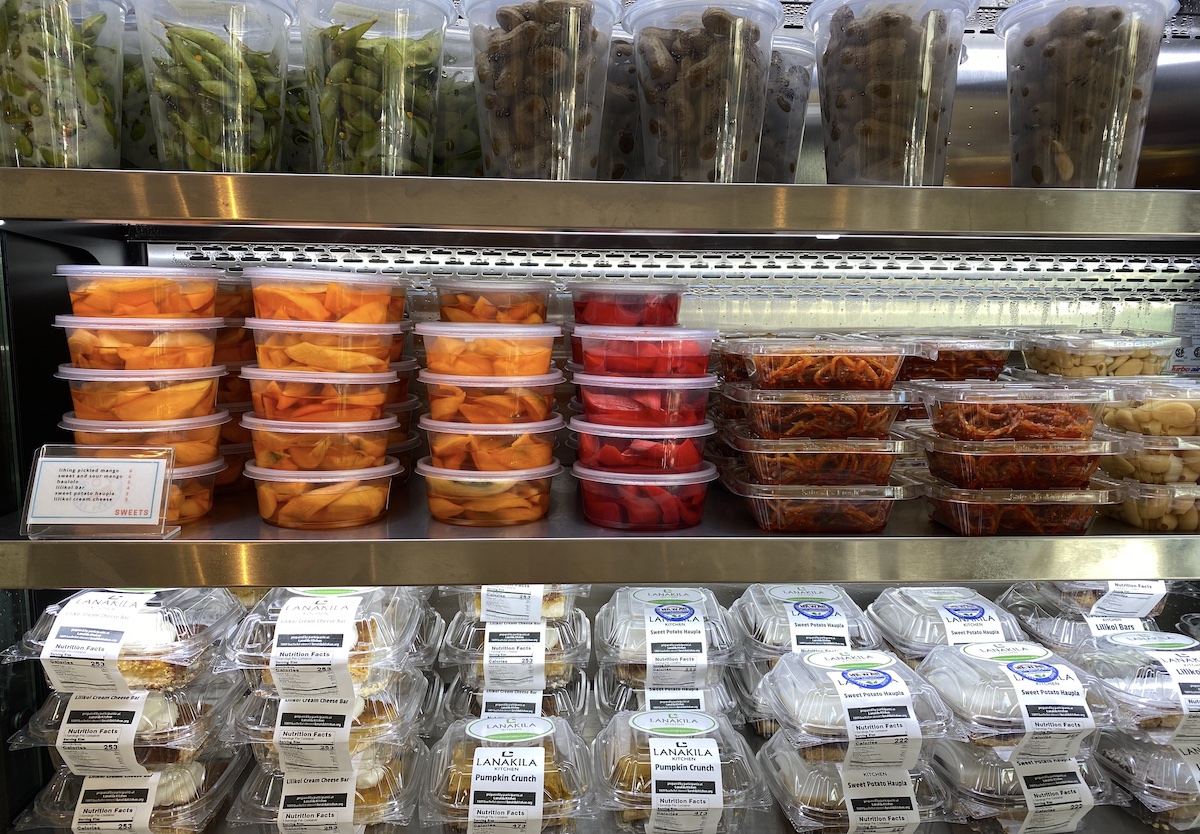 Paradise marries a one-stop-shop convenience store approach with poke so fresh the fish bypasses the auction, delivered directly from fishing boats. Also, it’s along my daily route home, which means that multiple times since it soft-opened in May, including day one, I’ve stopped by for poke and garlic shrimp bowls, pickled mango and the chance to ask questions like what’s with all the musubi and snacks? Which is how I find out that Chance Kim and Quynh Dang-Kim, a married couple, married their backgrounds in this poke shop: Kim spent six years helping to develop and roll out 7-Eleven Hawai‘i’s dizzying array of locally sourced snacks and prepared local foods like saimin bowls, and Dang-Kim worked at her family’s seafood distribution business. Dong Dang, her brother, co-owns Paradise with Kim.

SEE ALSO: What’s In Your Bowl? We Asked 3 Local Chefs for Their Secrets to a Perfect Poke Bowl 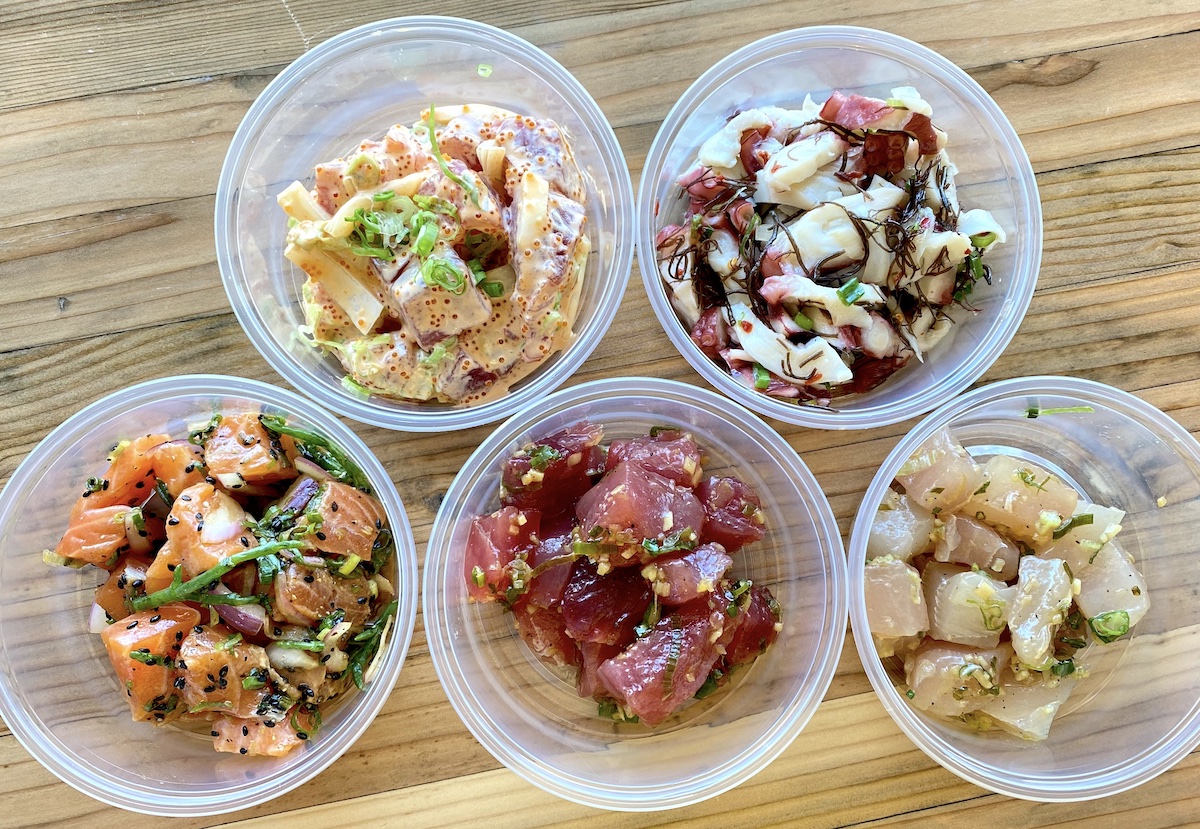 Poke here is lightly sauced, but the seasonings pack flavor. Four ‘ahi varieties include ginger green onion (my favorite), spicy and limu. Salmon varieties include truffle salmon and spicy. There’s also tako, kajiki marlin and baby scallop poke.  And while the shop opens at 6 a.m. on weekdays and 9 a.m. on weekends, poke, offloaded as whole fish from boats in the early morning, doesn’t land in the poke case until 10:30 a.m. From July 10, poke will be joined by a chirashi bowl ($17 to $20—with ‘ahi prices rising, the price hadn’t been decided by Wednesday, when I took these photos at a private hosted menu preview) whose silver-skinned hamachi and salmon are flown in fresh. Favorite item: dashi soy-marinated ikura salmon roe. Also coming: individual-size sashimi trays with ‘ahi, salmon or hamachi. 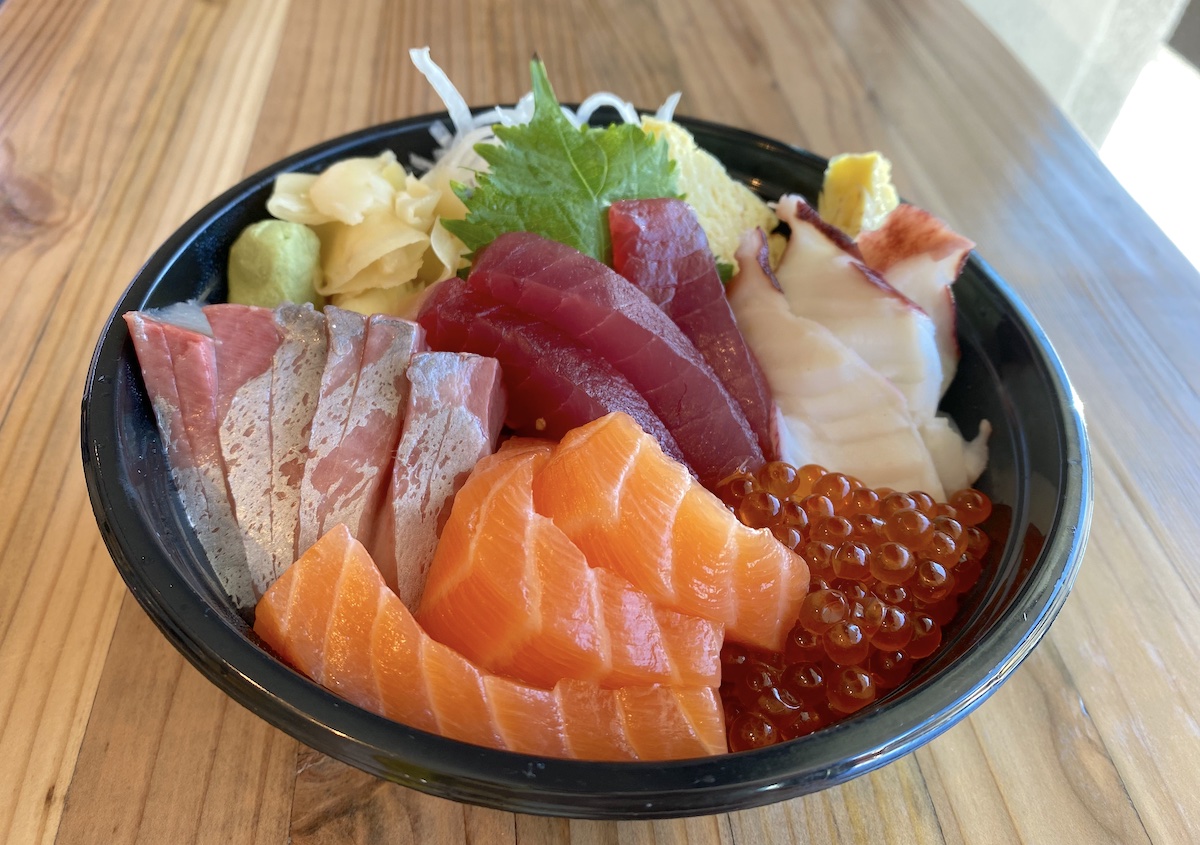 The idea of a poke shop with hot plates is not new: Poke by the Pound in Kalihi usually offers three or four, Chinatown’s Kahiau Poke has Hawaiian plates, and look at the char siu turkey tails and roast pork at Alicia’s Market. Paradise’s offerings include house-smoked meat: this $17 lemongrass smoked kalbi plate, a marriage of (you guessed it) Kim’s Korean heritage and Dang-Kim’s Vietnamese background, lightly smoky and less sweet than local-style kalbi; and the kalua pig on the Hawaiian bowl ($15), juicy and smoky next to poke and lomi salmon. 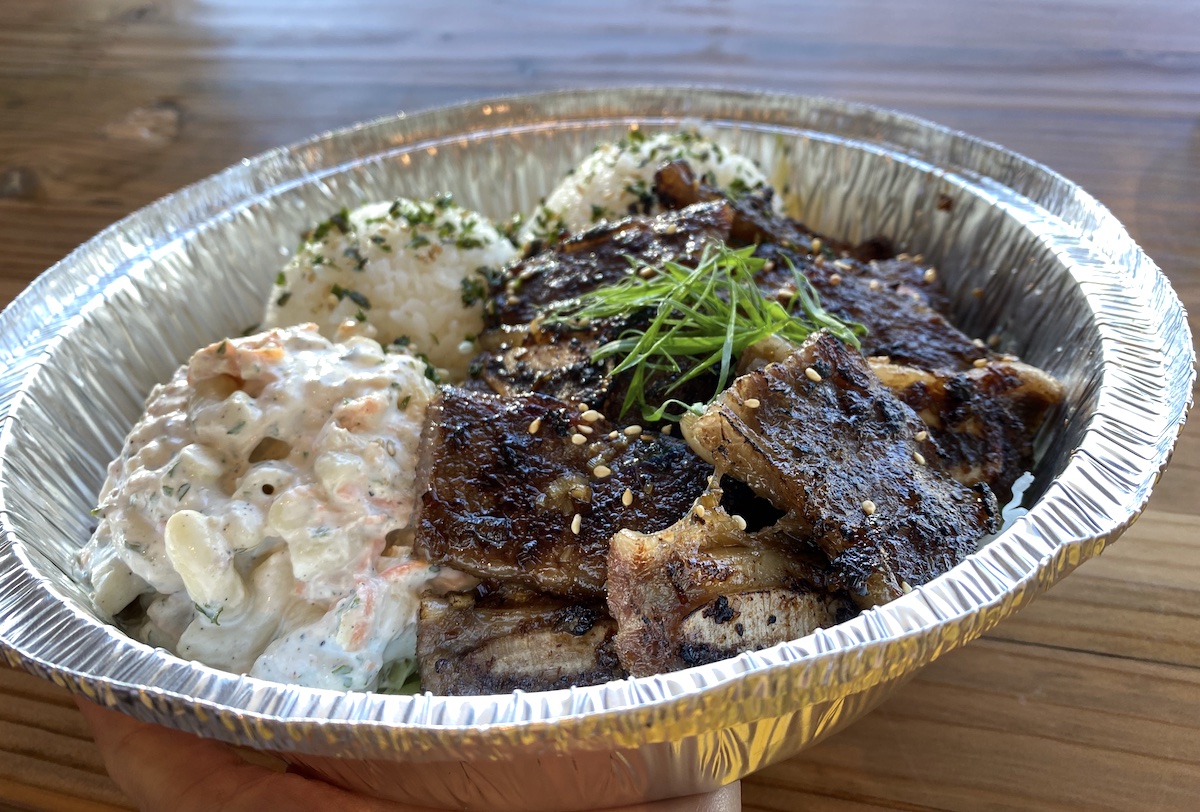 Also recommended is the $16 garlic shrimp plate. There are eight shrimp here, head-on and shell-on, deep-fried and sweetly garlicky. If you’re serious about garlic, don’t bother peeling; the shells are soft enough to eat. 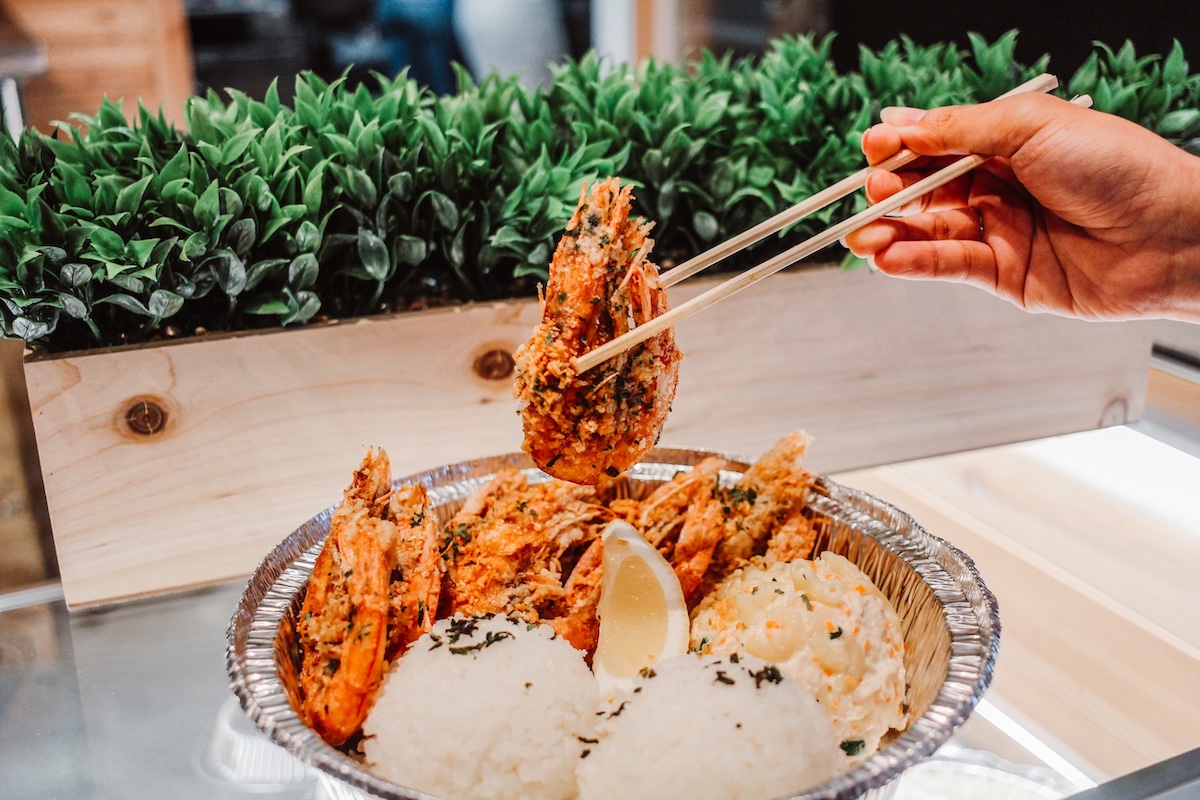 So what is up with all the musubi and snacks? Kim’s career at 7-Eleven included research trips to Japan, where budget travelers know that every convenience store has shelf upon shelf of musubi or onigiri. That’s why the count at Paradise is currently up to 12 kinds including Spam, spicy negi mentaiko (green onion with tiny-briny cod roe) and tuna mayo with crunchy ume bits—and why the plastic sheaths Paradise imports keep the nori separated from the rice until you open and wrap it.

SEE ALSO: Iyasume Makes Up to 23 Kinds of Spam Musubi

Paradise’s location on Nu’uanu Avenue next to Starbucks puts the shop on a main corridor funneling traffic from Pali Highway and Nu‘uanu Valley to Downtown and Chinatown, meaning Starbucks customers and people on their way to and from work stop in for breakfast, lunch, dinner and snacks. The catch? Here, musubi are breakfast food, so at 10:30 when poke appears, musubi stop appearing. 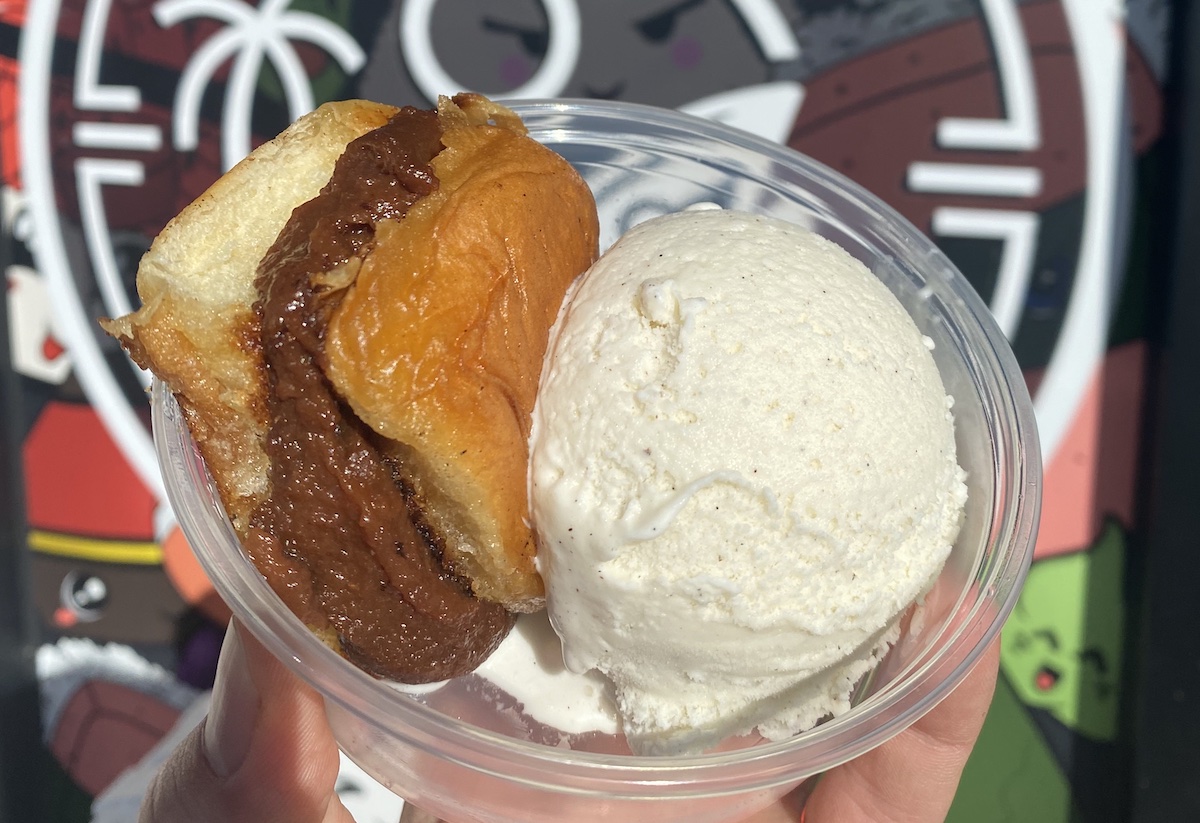 This is pretty much the whole story as I unraveled it over multiple visits, except for two things: Kim, who loves the pantheon of local food so much he can rattle off places to find butter mochi and grimaces when I say I don’t understand saimin, says he’s unveiling a singular dessert that will combine kūlolo, King’s Hawaiian sweet rolls and ice cream. And for the grand opening on July 10, there will be one-day specials like nigiri sushi and discounted sashimi trays.