Although imu-roasted kalua pig and smoke meat have long been around in Hawai‘i, quality smokehouse style barbecue has remained elusive until recently. Now a few really good spots are thriving. So when a fellow food lover and avid hunter/smoker told me there was legit barbecue to be found at an old watering hole in Kailua, I had high hopes for something truly tasty—and I found just that.

Inside the chainlink fence leading to the back patio of Bob’s Sports Bar is Whiskey Smoke 808. The backstory is a win-win for both: Before the pandemic, Bob’s was busy most nights with people playing pool, corn hole and darts or having a drink with friends. Like other bars, it was hit hard by multiple shutdowns and struggling to stay afloat. Meanwhile, former Hibachi Kailua chef Cory Vidinha and his wife Tina had been cooking up barbecue at home to help feed friends and others hit hard by the pandemic. Soon they were busier than they could manage, folks insisted on paying them for the food and the couple began looking for a larger space. Last December the Vidinhas and their two sons started Whiskey Smoke 808 in the kitchen at Bob’s. 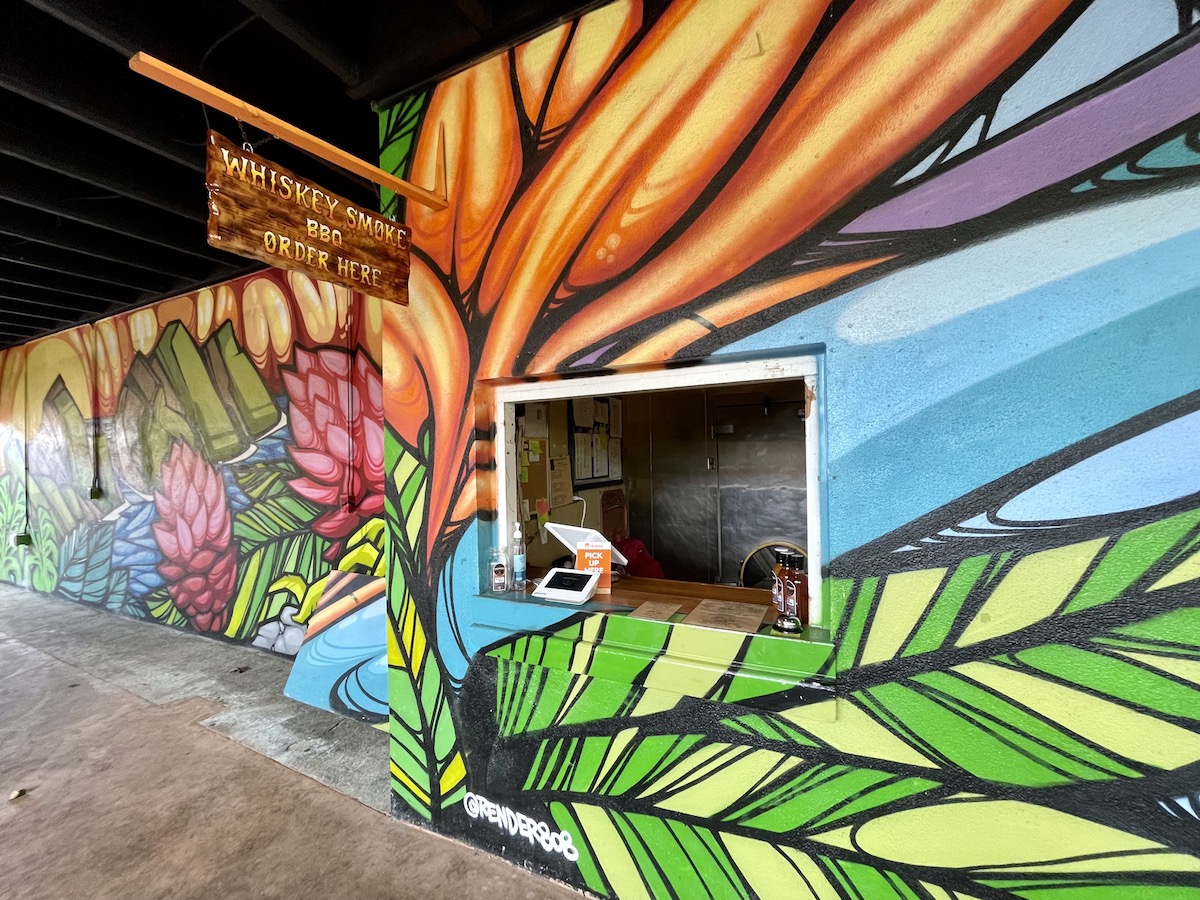 The expansive outdoor space is now their home. Sturdy, custom picnic tables are center stage against a colorful backdrop of artwork by neighbor @render808. The menu features meats including brisket, pork ribs, chicken quarters and pulled pork. Plates come with two sides, a house-made sauce of your choice and pickled peppers or chow chow. There are also brisket tacos, smoke meat, grilled cheese with choice of meat, brisket chili and smash burgers. Specials like beef ribs, pastrami sandwiches and rack of lamb are available each week. Vidinha uses kiawe, guava, lychee and other woods to produce different flavors. 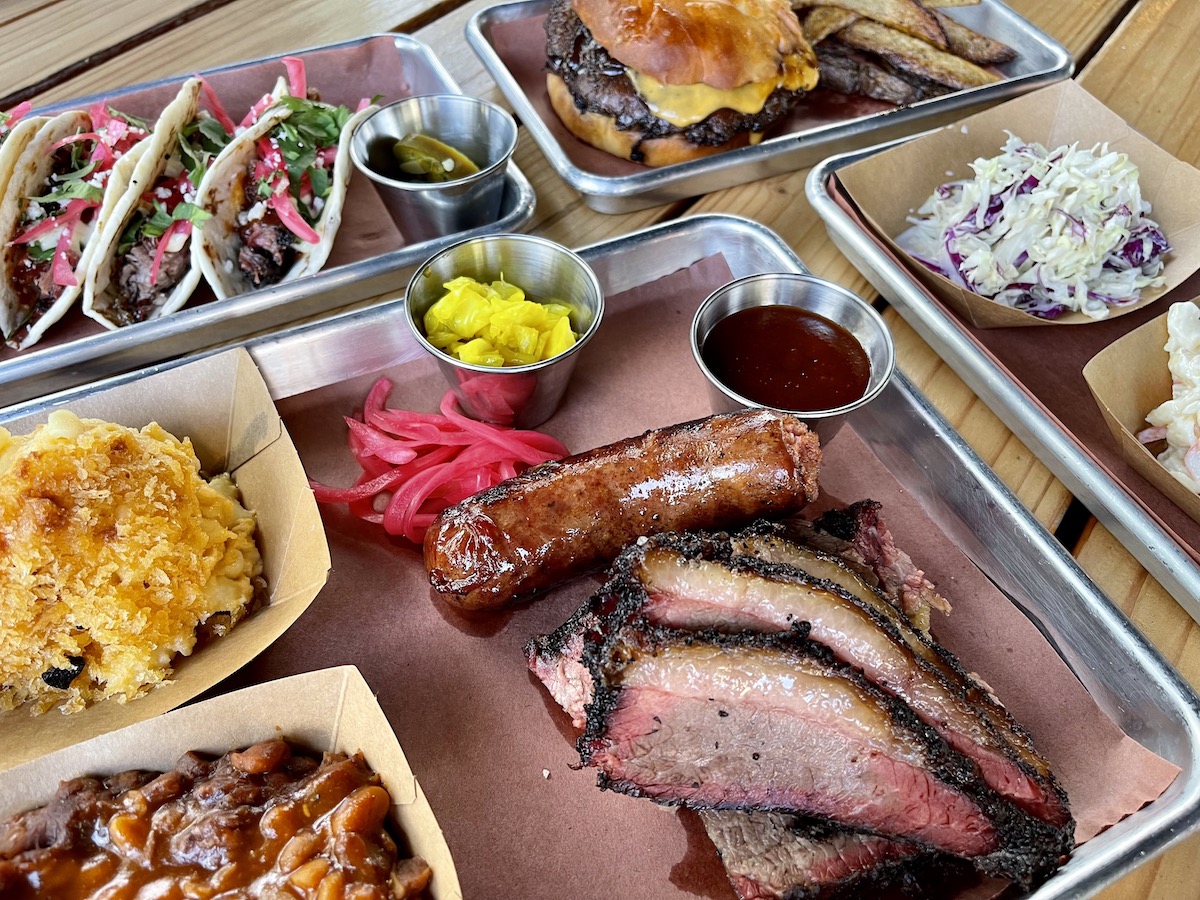 Brisket is my favorite cut so I go for that ($20.80) and a Flintstone-esque beef rib plate that’s on special ($36). For sides I go with the smoked mac and cheese, smoked barbecue beans, potato-mac salad and coleslaw. I add on a pineapple fennel smoked sausage because I’m obsessed even with the idea, and the whiskey-coke teri smash burger, which comes with steak fries ($16.64). 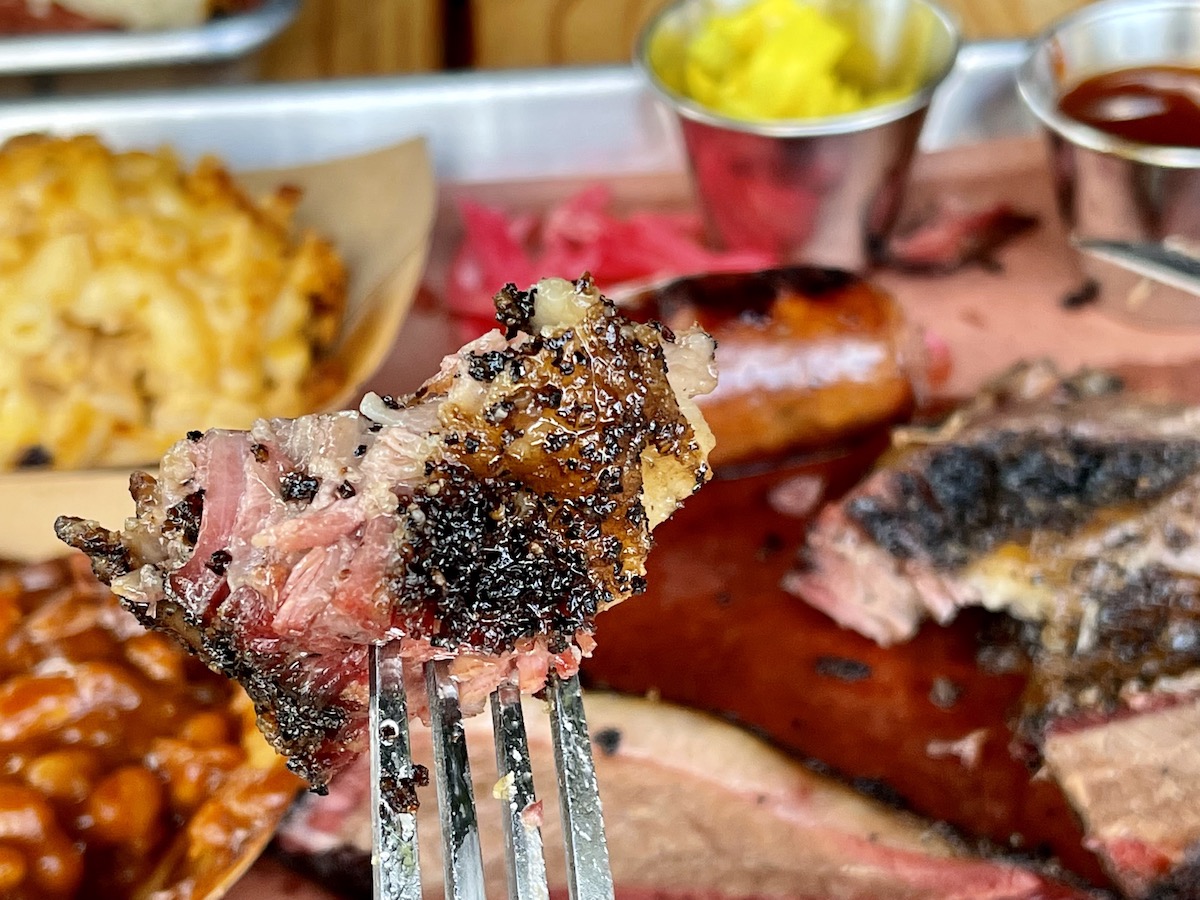 The brisket plate comes with about a half-pound of meat and generous sides. The brisket is moist and fatty with a perfectly salty pepper bark. Vidinha attributes this to careful trimming before smoking, and a resting period of up to 10 hours while he slowly lowers the heat, allowing fat and collagen to settle in and keeping the meat moist and flavorful.

Everything tastes homemade because it is. The mac and cheese is rich and cheesy, while the barbecue beans are a flavor bomb of sweet and smokey with a tomato base and caramelized finish. Vidinha tells me to mix the beans with the potato-mac salad—straight winnaz. The coleslaw is simple but with just the right balance of creaminess, crunch and acid. It’ll be hard to come back and not get the same sides every time because the combination of everything has me yelling at the table with joy. The liliko‘i barbecue sauce is my favorite, tangy and deep with a fruity background.

The fennel and pineapple sausage is the juiciest smoked sausage I’ve ever had. The smoked skin pops to reveal a moist interior with notes of fennel and pineapple. Now, back to the chow chow. Its origins remain mysterious, but lie somewhere between pickle relish and giardiniera. Vidinha’s version is mainly cabbage with some thinly sliced bell peppers, hot pickled in a sweet and tangy mixture. Bites of this in between juicy morsels of brisket will make your tongue dance. 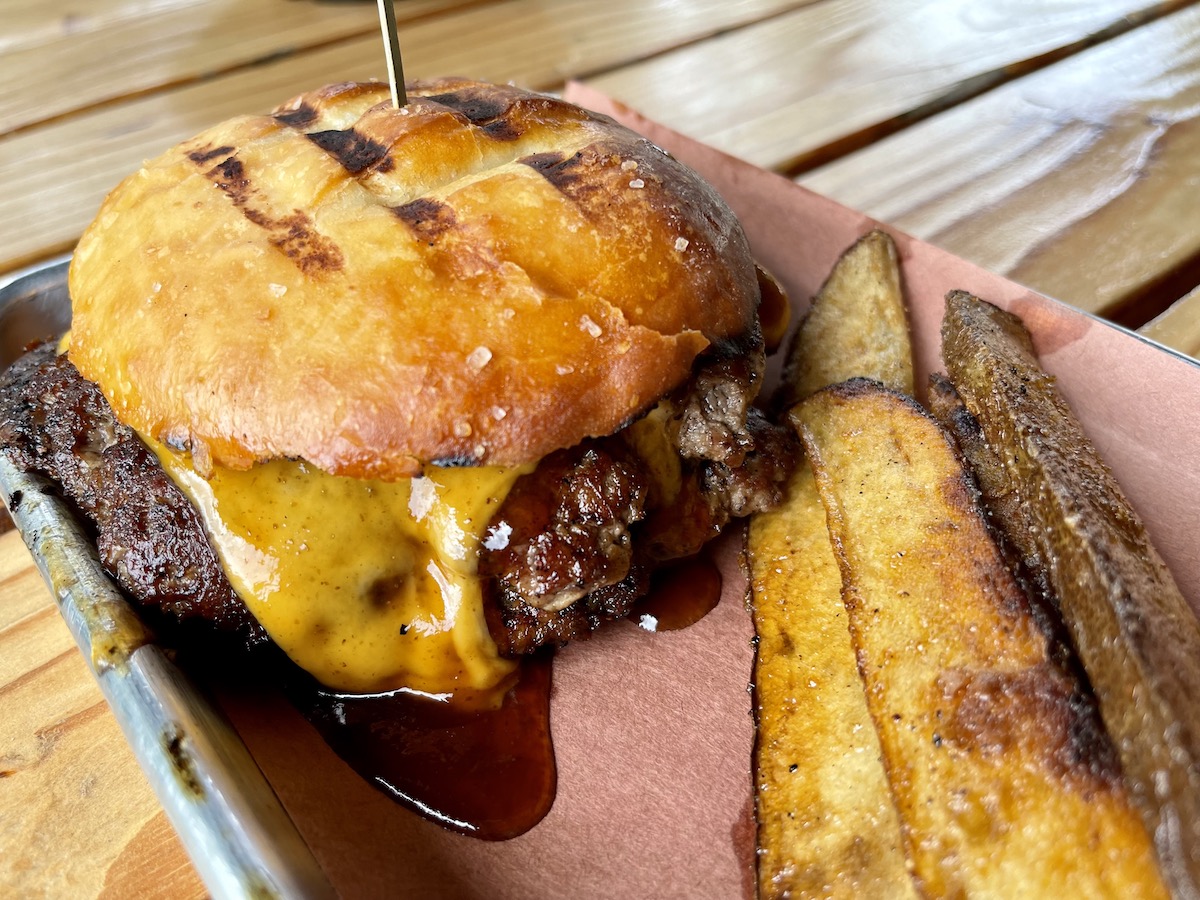 About the teri burger, I’ll try to be succinct. Two smashed patties are stacked and layered with gooey American cheese. The edges are crisped to the brink of being burnt, offering multiple layers of concentrated beefy flavor. I’m already beside myself with this, but the star of the show? The homemade bun that until last week Tina Vidinha was making by hand. Imagine if a buttermilk biscuit had a lovechild with a soft pretzel and then its golden-brown top got finished with grill marks and some flaky salt. Yeah, I know. Then, stack two teriyaki-glazed smashed burgers and cheese and leave out all the veggies. I’m yelling again. And this burger is my neighbor! 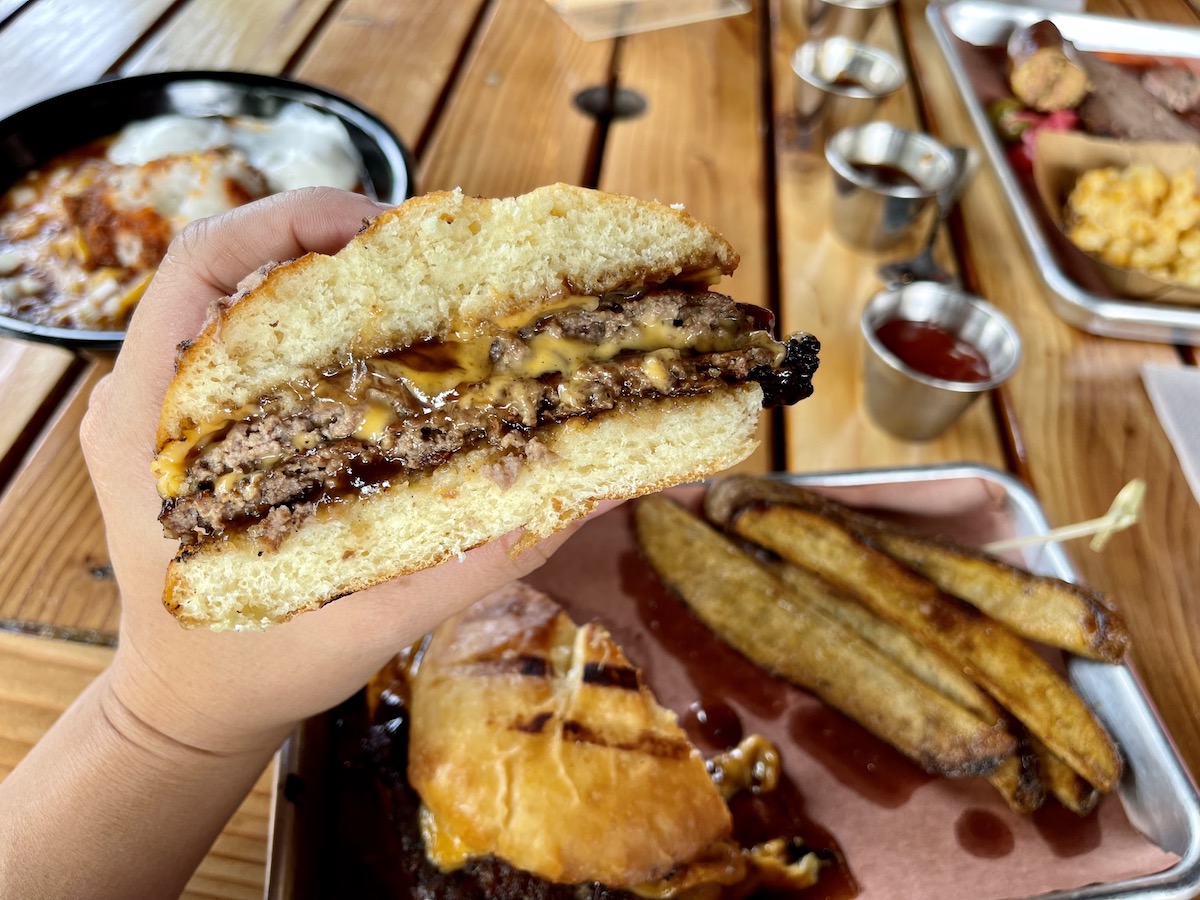 I’m not even finished about the bun. It’s buttery and flaky and soft, but it also has mega structural integrity. You can sample it in the sliders and as pull-apart rolls in Whiskey Smoke’s family packs.

Cory Vidinha grew up hunting, smoking meat and generally working with fire, which turned into an obsession. Now the Vidinhas, Windward-side natives, are serving up their brand of Texas-inspired barbecue “always with Hawai‘i heart,” Vidinha says. Trust me—you’ll taste the love.