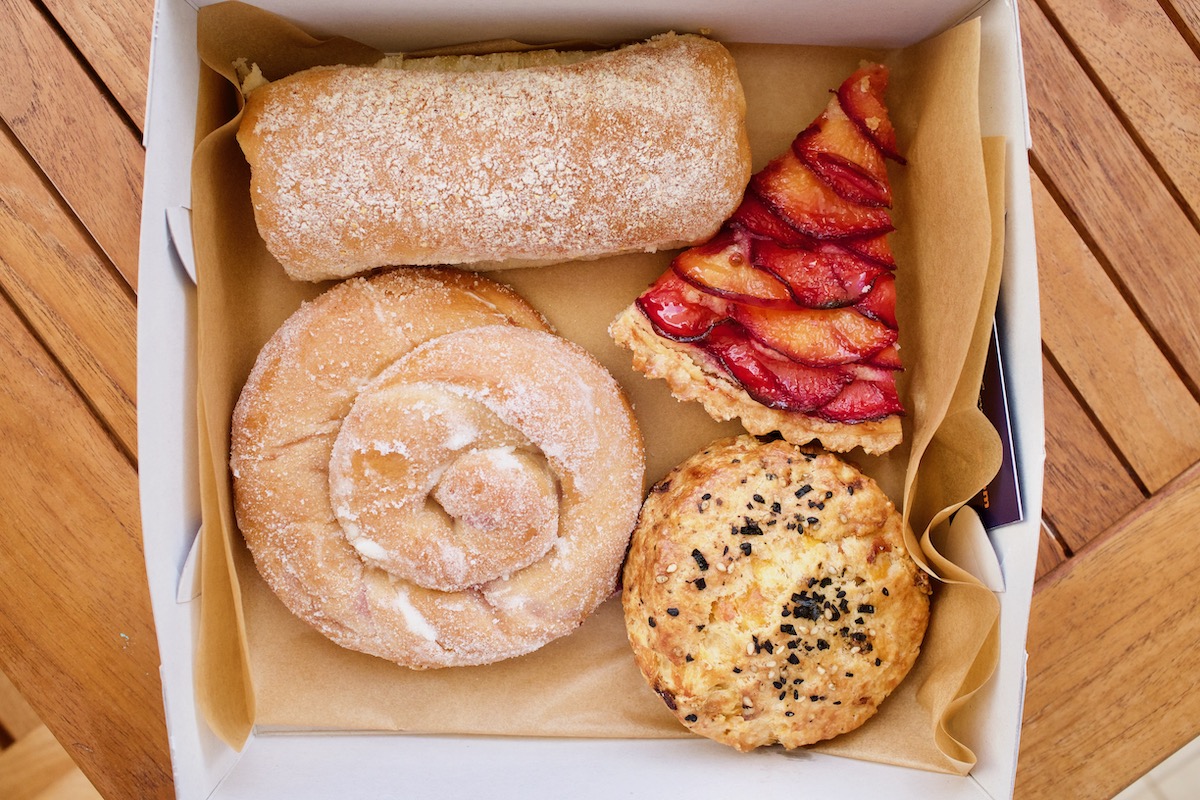 When I first step into Beyond Pastry Studio’s new spot downtown, Cristina Nishioka doesn’t want to talk about her pastries. So I’ll do it for her: First, there’s her ube cream cheese ensaymada, a soft spiral of bread intertwined with ube jam that she makes with fresh, local purple yam. Unlike most ube used elsewhere, which is often just food coloring and artificial flavors, her ube is a gentle purple and just as gently sweet. (Ube in its natural form, it turns out, is more like yamaimo, subtle and slippery, than a purple sweet potato, starchy and sweet.) 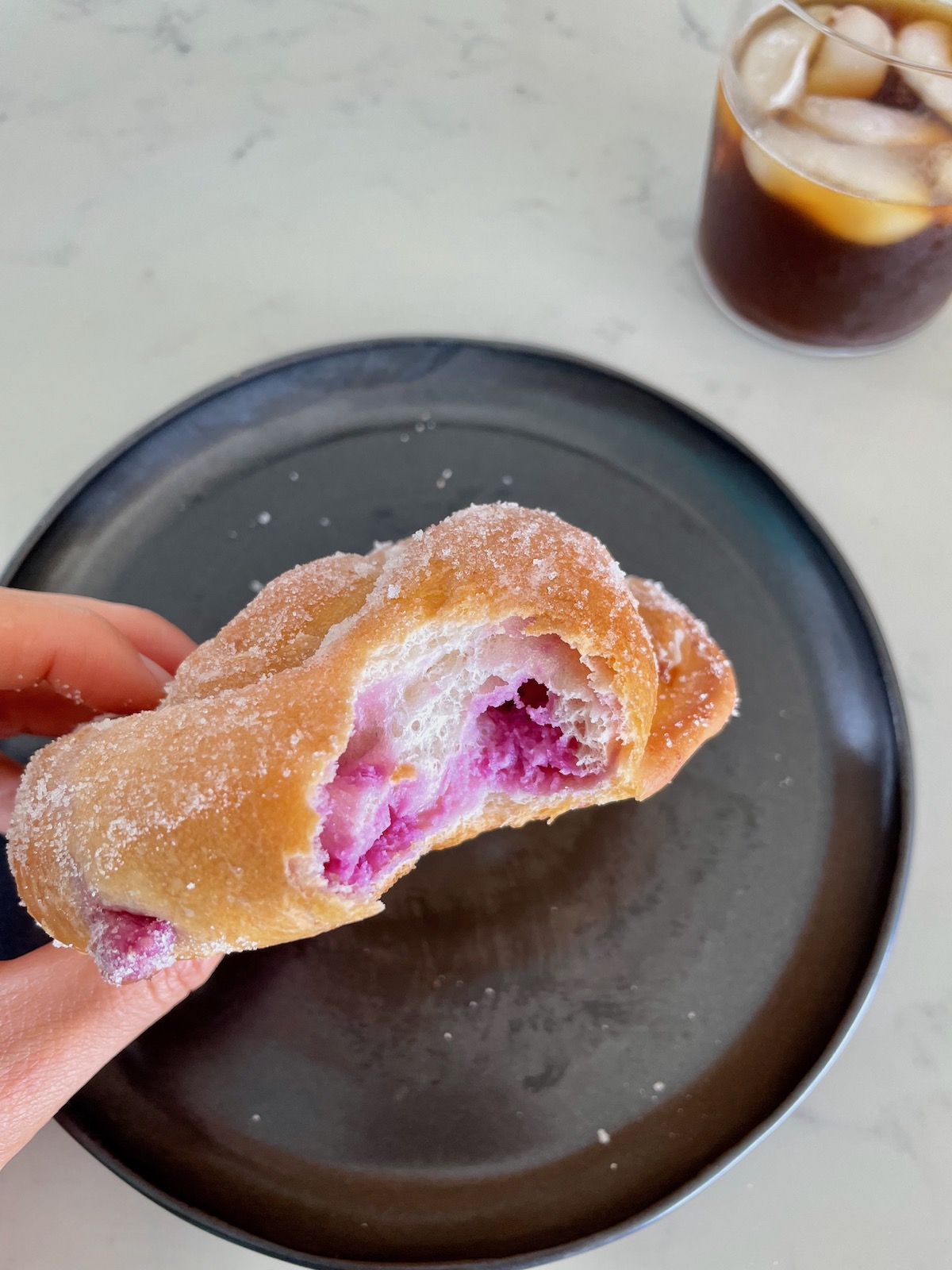 Then there’s her mango pineapple Spanish roll, born out of a surplus of mango, with a sweet and tart jam tucked into pillowy dough dusted in breadcrumbs. Neither is too sweet (“Is ‘not too sweet’ the greatest compliment a Chinese person can give for a dessert?” a baker friend contemplated recently), and paired with an afternoon cup of coffee, they are gone too quickly. I love these modern takes on Filipino breads, too uncommonly seen. Nishioka’s friends have been encouraging her to come up with a Filipino pastry box—I second that motion.

What’s in the pastry case changes frequently, ranging from a frangipane plum tart to a Portuguese sausage and furikake biscuit. Once Nishioka gets her bearings on the new space, she’ll bring back her cheesecakes, which she debuted in her pop-up days and sold out immediately every time she released them.

SEE ALSO: New Pastry Pop-Up’s Breads, Butters and Cheesecakes Are Worth the Calories 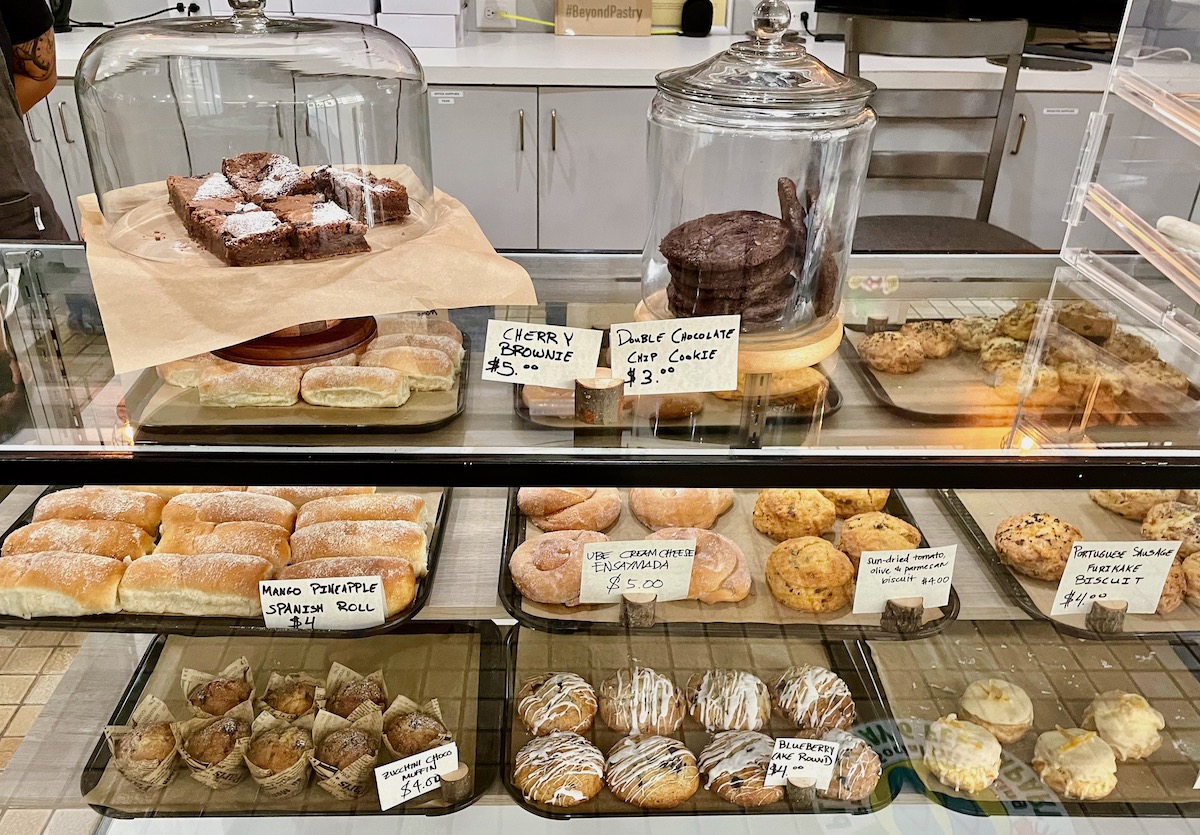 But what Nishioka really wants to talk about: the beyond part. Beyond Pastry Studio is not a bakery. Or, at least, it’s not just a bakery. It’s also an art studio. On display in the front of the shop now are ceramics from Devin Oishi and vintage goods from Midcenturyattic’s Bryzane Lagmay and Joel Malicdem, who helped Nishioka build some of the furniture in her space.

Stepping into Beyond Pastry, you’ll also notice the open production kitchen—in about a month, Nishioka plans to start hands-on baking and pastry workshops. While she’s built a following around her baked goods, they’re not the goal, she says. Her hope is to build a baking community and forge connections among people of all disciplines—the workshops are about baking skills development as well as a team-building exercise. After all, what better way to bring people together in the hobby we turned to for comfort in the midst of the pandemic? In this way, the woman who spearheaded the Stand Against Hate pastry boxes earlier this year hopes we can all—pun intended—rise together.

Beyond Pastry’s baked goods will be part of a special Filipino pastry box to celebrate Filipino American History Month in October. Other participating bakers are Heather Lukela of Slice by HB Baking, Harley Tunac of the Local General Store, Gino Ojano, and Yimmy Kwok of Fig & Ginger Honolulu. Ordering is by online preorder at Beyond Pastry’s website starting at 9 a.m. on Oct. 12. Pickup is at 1067 Alakea St. on Oct. 16. Quantities are limited.