At $130, it’s on par with other locally owned sushi omakase—with caviar and truffles to boot.

One of the questions I get most often is where to get good sushi in Honolulu. I always wonder, why don’t people just return to their old favorites? There are so many great sushi places within a five-mile radius, why do you need to ask me?

Now, I’m not talking about the snobs—whoops, I mean purists—who only eat traditional sushi by a master who has trained in Japan and has a known pedigree. Hawai‘i people know their sushi, but I think many foodies are looking for something new and different to expand their horizons.

Nothing too different or crazy.

Dishes that still resemble the sushi they know and love.

Maybe something that is more of an experience, too.

Oh, and can you find something that won’t break the bank?

Omakase by Aung, located on Kapahulu Avenue, has only been open for a few weeks, but is already very popular because it checks all of those boxes. The omakase consists of 15 courses for about $130 per person, which is on par with or cheaper than other non-Japanese sushi counters in town and considered reasonable for the style and quality of the ingredients. Even better, it’s BYOB (for now). 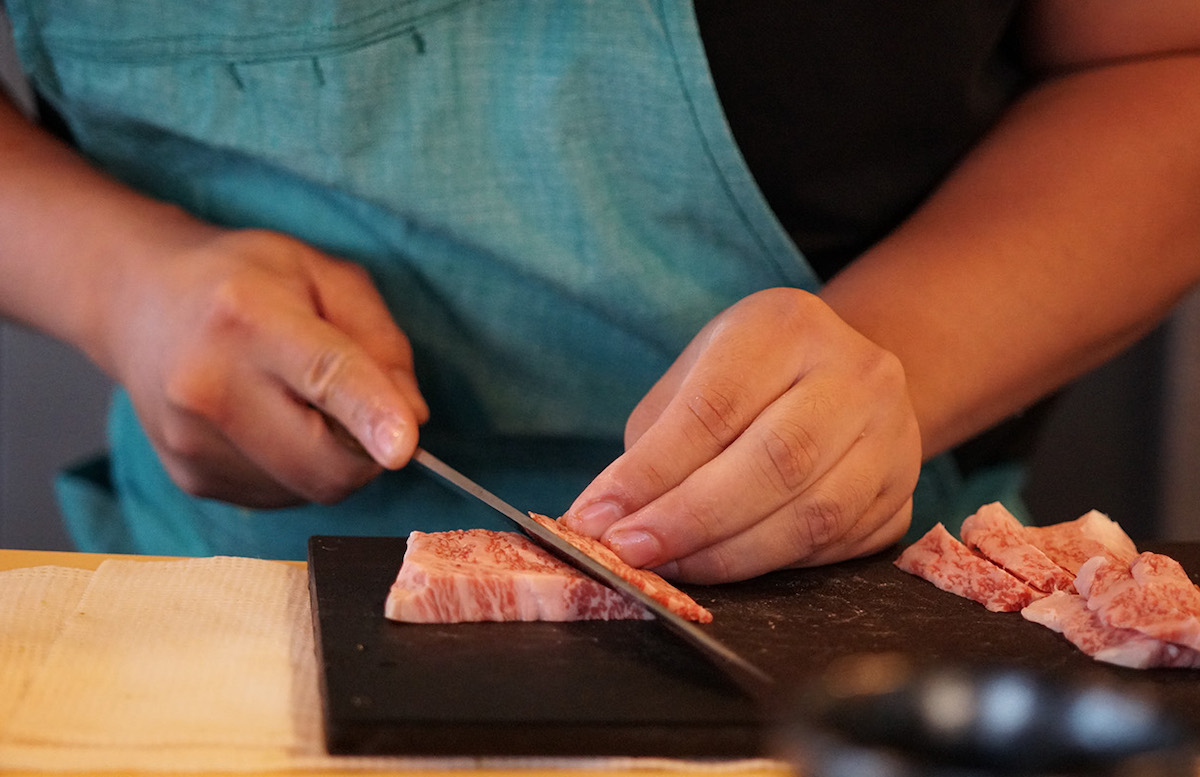 The place is named for chef-owner Aung Lawalt, who’s Burmese but born and raised in Thailand. He worked in sushi restaurants in San Francisco and more recently, nine years in New York at Sushi by M. Lawalt finally escaped the craziness of the Big Apple and moved here to be closer to his family, and brought his experiences with him.

He gets many of his ingredients locally and from Japan, but uses other flavors and techniques to create a more fusion experience with bells and whistles. For example, he slices (not shaves) truffles over Ora King salmon nigiri for the umami and texture, and adds flecks of fresh lime zest or flaky salt to his scallop nigiri, depending on what species it is. Caviar tops a decadent bite of fatty tuna to give it a luxurious twist. Many times I was as sad to know my course was gone, as I was happy to have it. 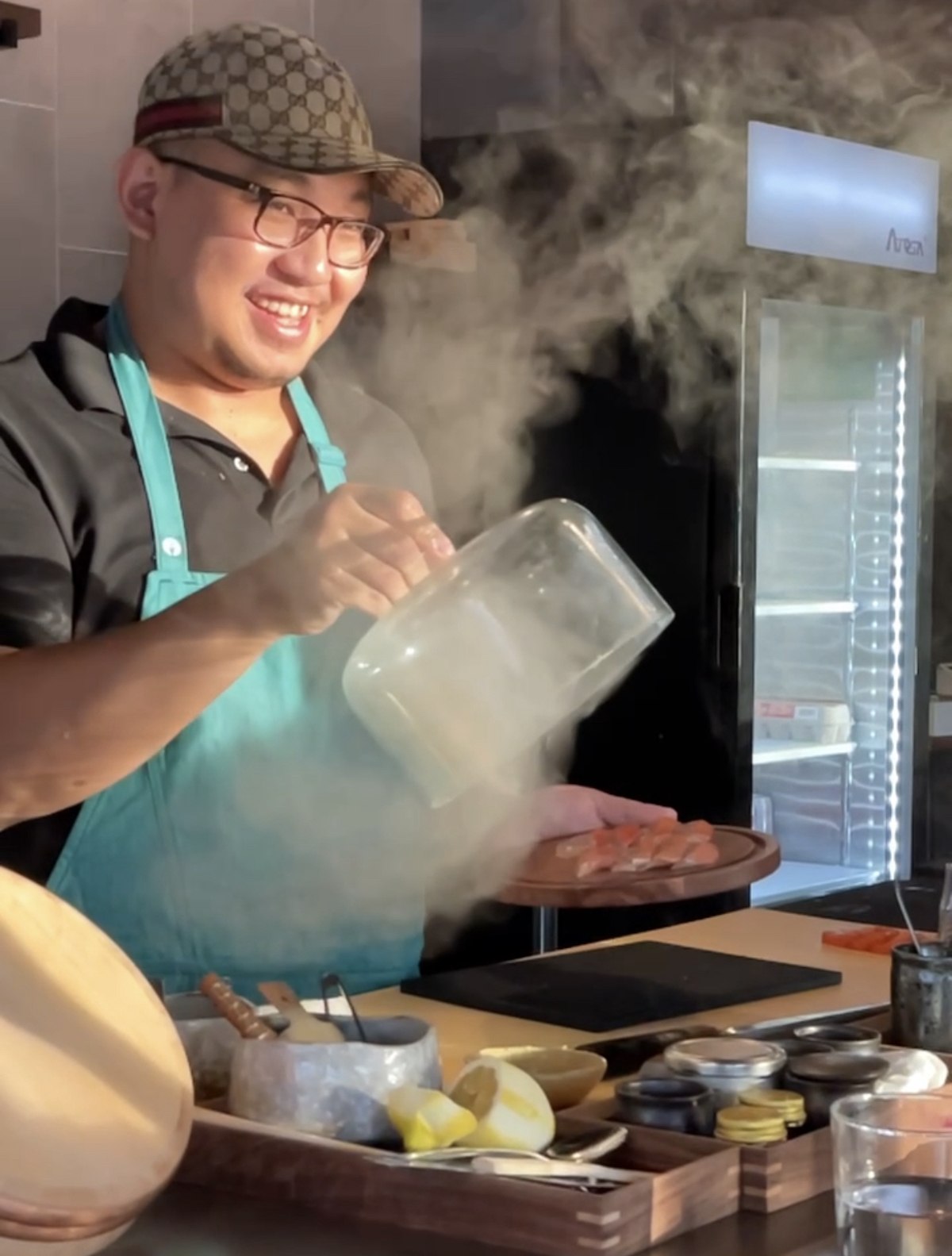 At least once during the meal, he will use a smoking gun not just to impart a quick smokiness to the fish, but to provide a dramatic visual when he lifts the glass. (Yes, it’s great for the ‘gram.)

Lawalt made his own vanilla ice cream for dessert and sliced truffles over it—he admits he’s not a pastry chef, so his ice cream is a little rustic, but the truffle makes it all turn into butter in your mouth, so who cares? 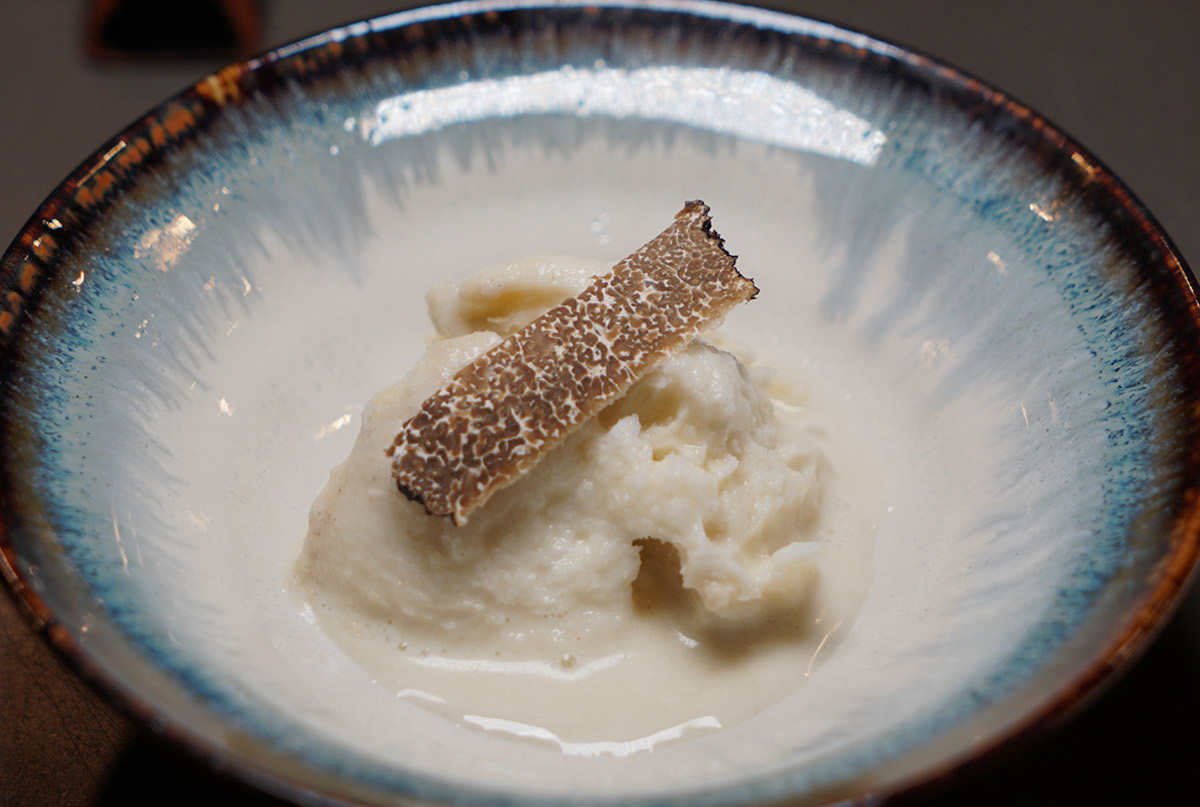 The menu changes constantly, so what you see here and what I’ve described may not be served when you go. I liked it enough that I went twice, and quite a few items had changed within the span of a week. Here’s a sampling of what I had. 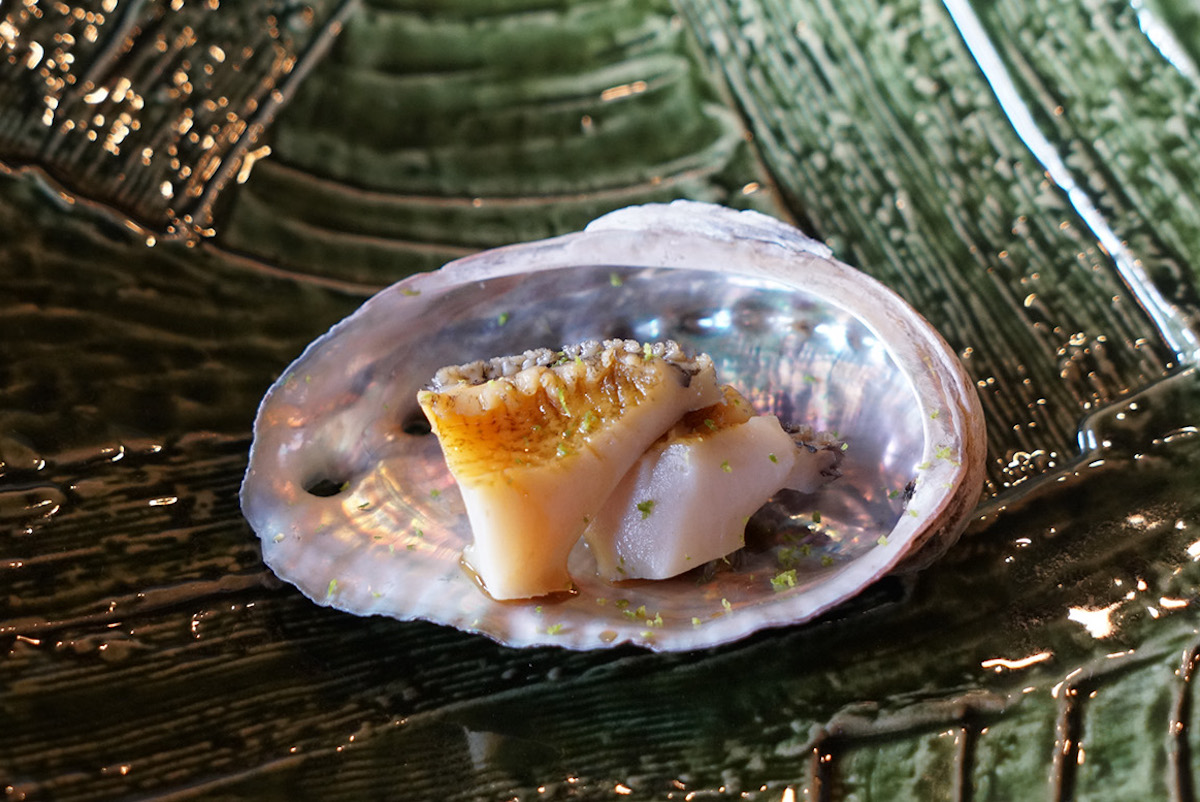 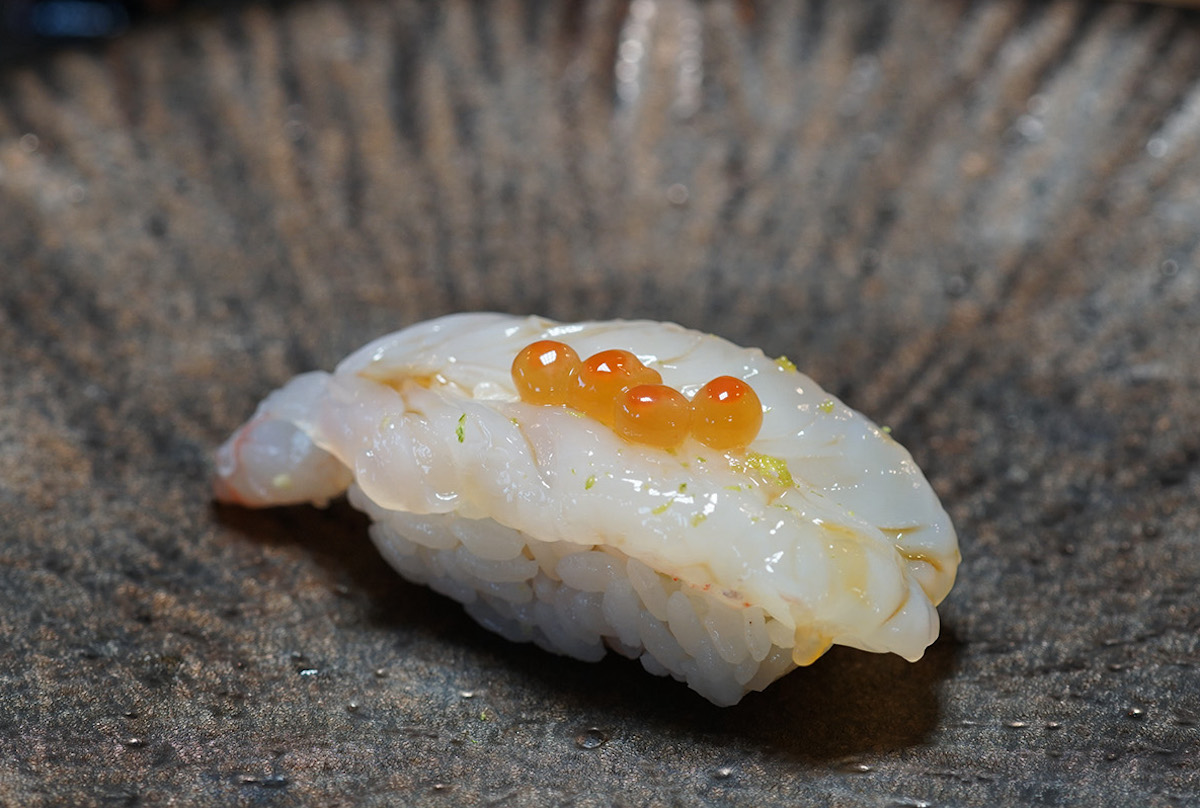 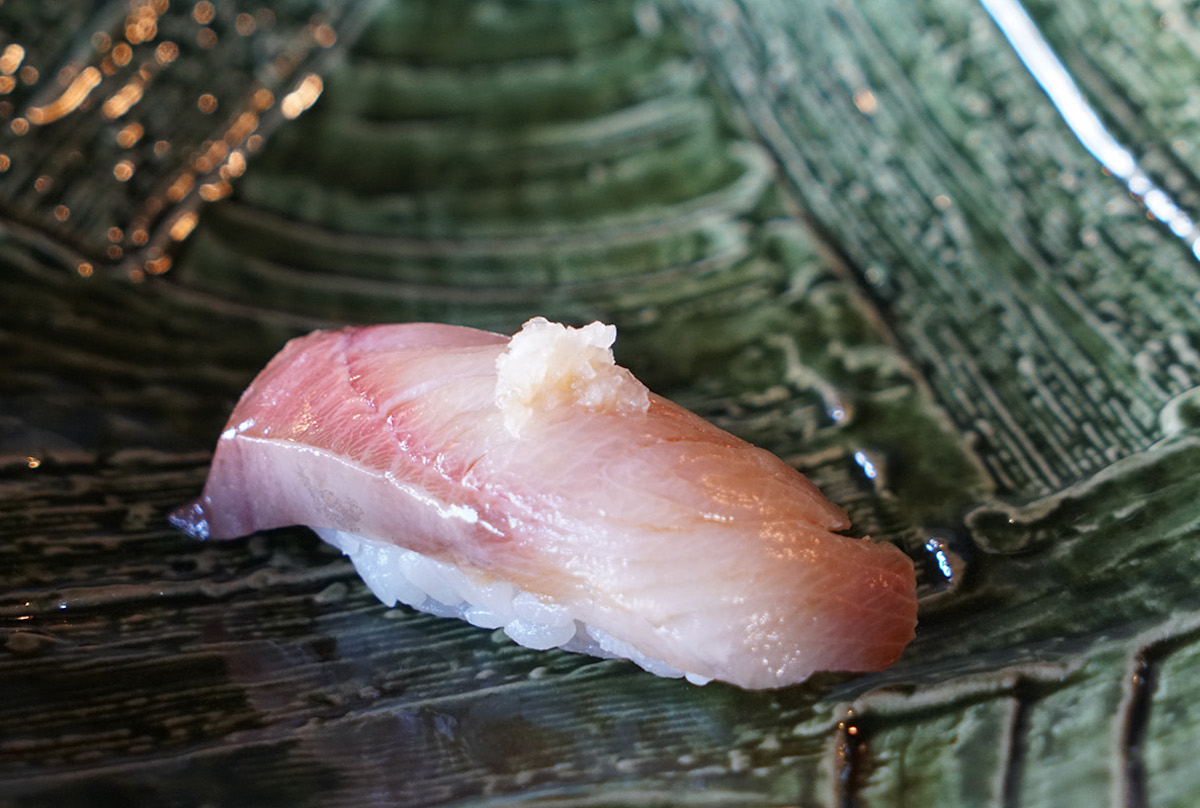 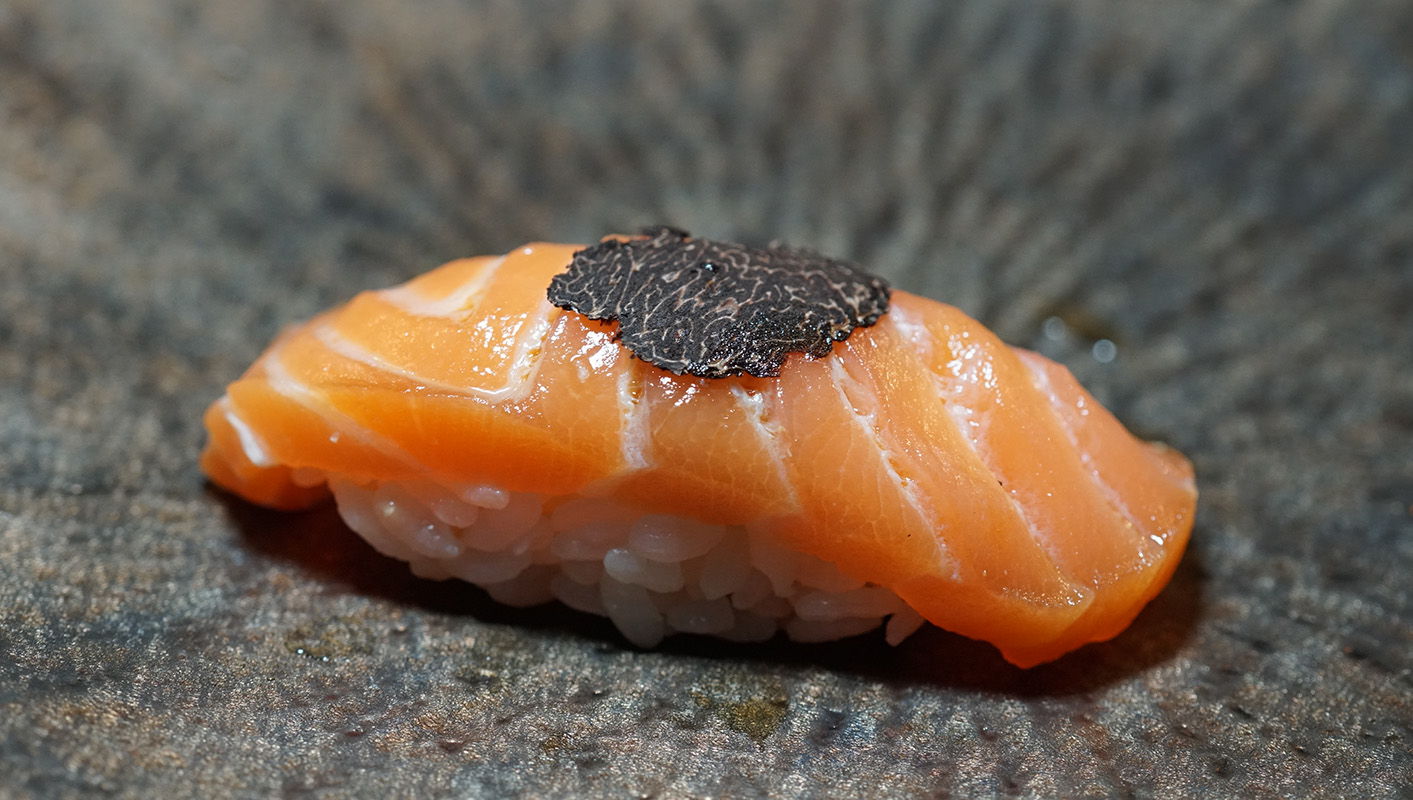 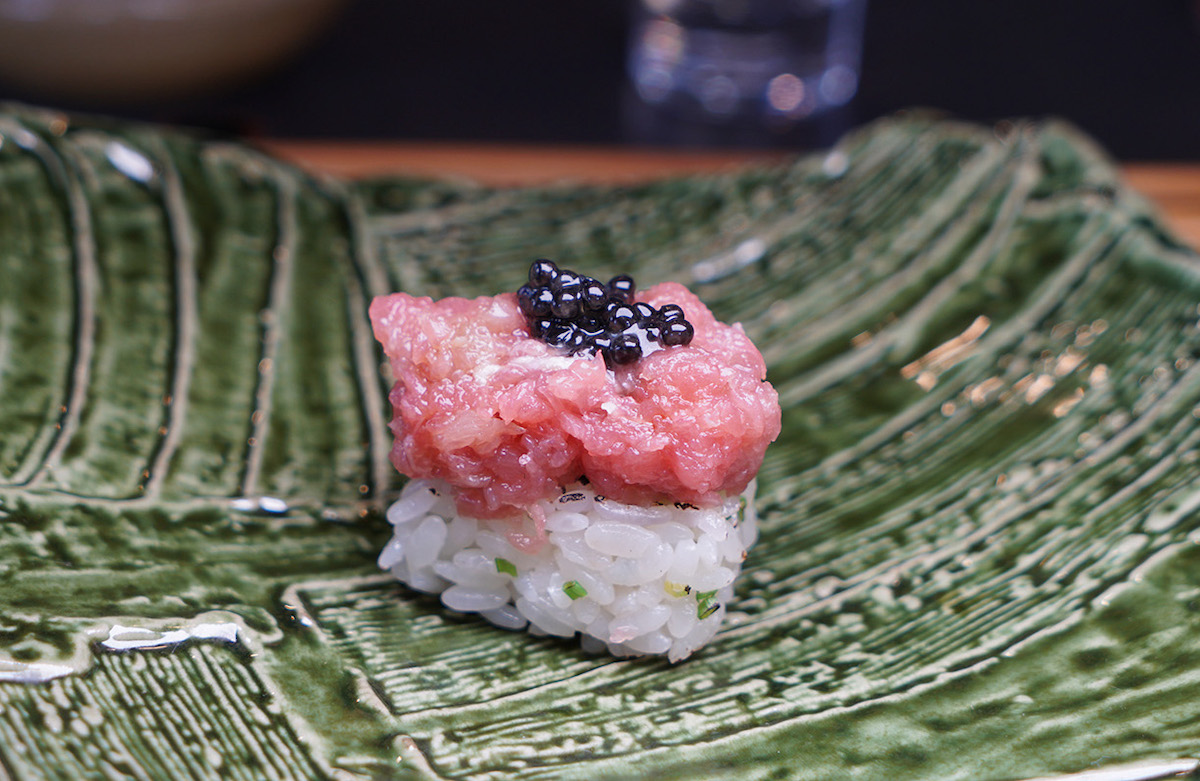 Lawalt himself is fun and chatty, and that adds to the communal atmosphere of the sushi bar, which can seat up to 12 people. I see from the Instagram posts that many people have made new friends there and ended up sharing wine and sake through the evening.

Omakase by Aung is currently open daily, but Lawalt said that may change as he figures out the best days to take a break. Seatings are at 5:30 and 7:45 p.m.; if you can take a long lunch break, the same menu (same price) is available at 1 p.m. Reservations are essential—make them through Open Table at omakasebyaung.com/reservations or text (don’t call) (808) 589-8994.

Parking is available on the street or behind the shop in the Guava Smoked lot. You can also park in the paid lot across the street adjacent to Side Street Inn.