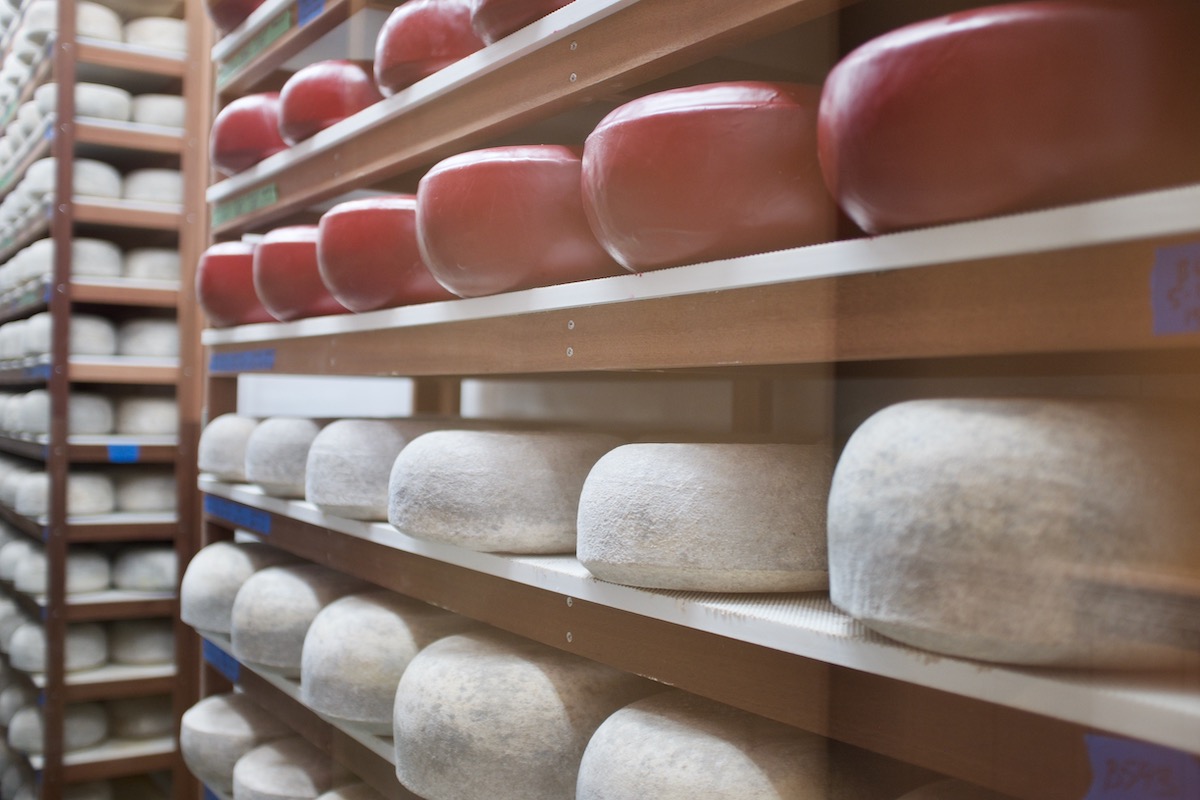 It’s 10 a.m. on a Saturday morning, and I’m surprised by how many parents are letting their children eat goat milk gelato. Maybe after more than a year of the pandemic, the rules no longer apply. Or maybe it’s because we’re on a goat milk farm, and really, how could you resist the gelato? It’s like trying to resist petting and feeding the goats as they walk up to you and graze out of your hand, with a look easily mistaken for love.

Eight years ago, Emma Bello of Sweet Land Farm started O‘ahu’s only goat dairy, producing fresh and aged goat cheese, from chevre to tomme. But it’s only now that people are discovering the farm, thanks to the recently started public tours and the farm shop. (Which actually opened at the end of 2019, but you know, the pandemic.) The farm shop is now fully stocked, with all things goat milk: from feta cheese to roasted strawberry gelato to rosemary and mint soap to even goat milk lotion, which proves to be a literal balm to the sunburn I’ve acquired on my North Shore jaunt. 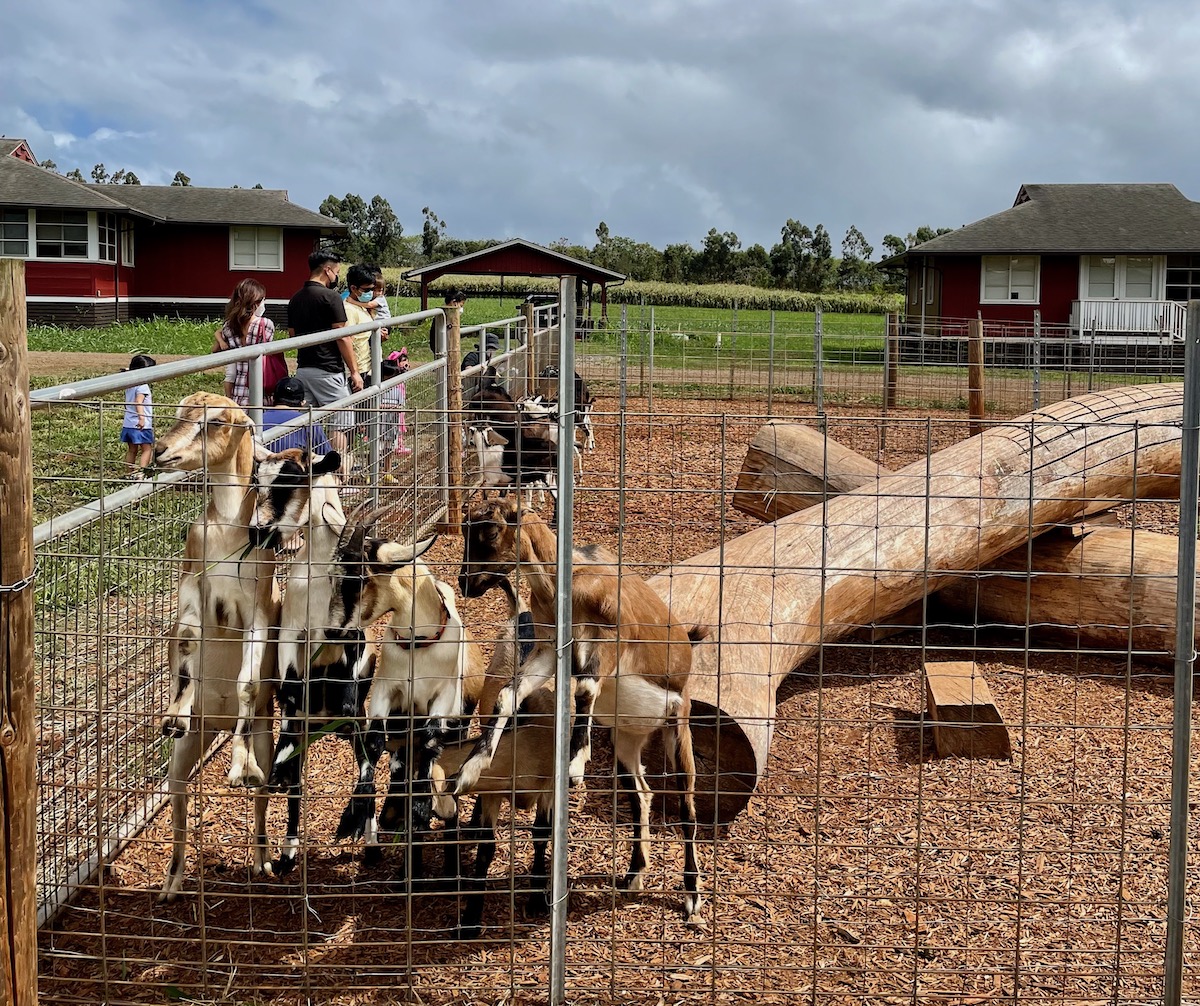 On a recent Saturday, the farm was filled with families on the farm tour, in which you milk a goat, feed the goats, and learn about the cheesemaking process. Kids (the human kind) swarm the animal pens and gather at the picnic tables to eat gelato drizzled with goat milk caramel and nibble at cheese plates. Bello has found that people really want to hang out at the farm—and how could you not, with the wide open expanse, 86 acres fronting the Wai‘anae mountains, the tableau completed with a picturesque barn and 1940s-era homes that Bello saved from demolition and moved (as in cut in half and transported on the highway and then reassembled on the farm). So she’s planning on expanding the shop, introducing more food items to the café side, and building out the store part into a larger space. And come the holidays, she’ll introduce items like engraved slate cheeseboards in addition to those already at the shop in woods including albizia and sapele, plus new treats such as goat milk toffee and caramels, and seasonal gelato flavors. 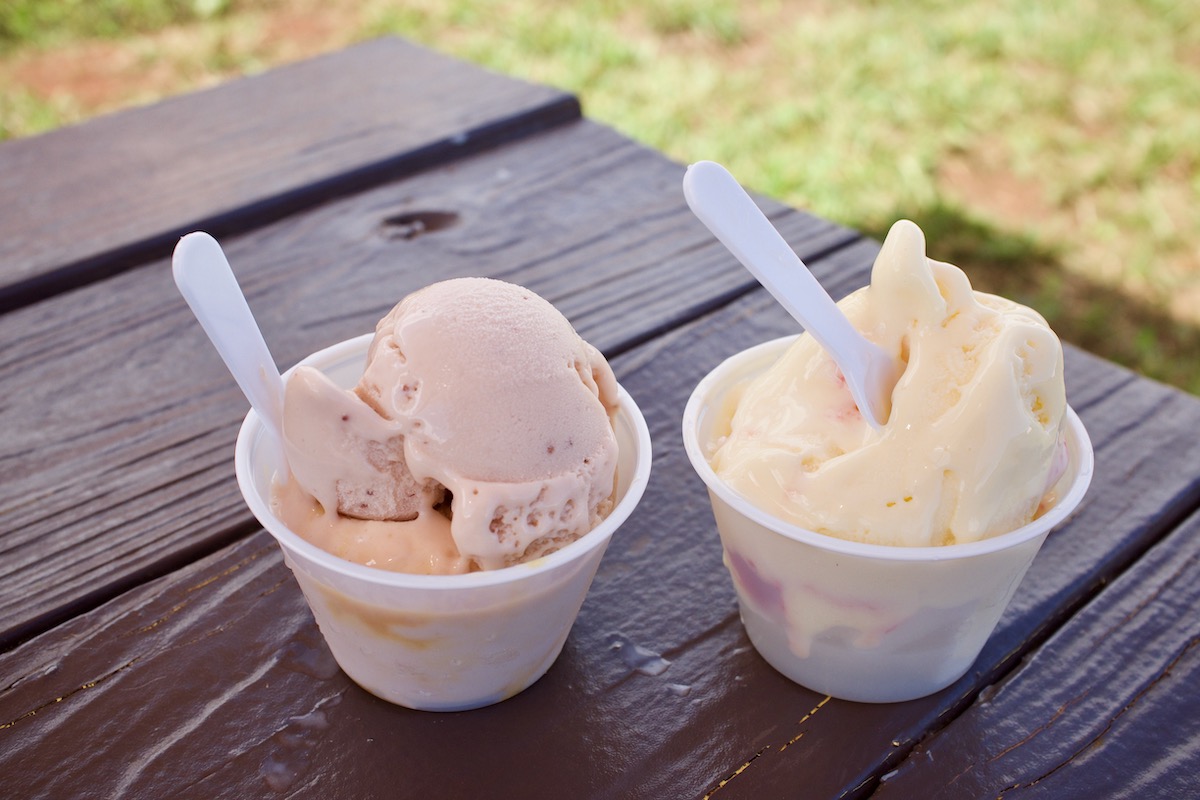 At the moment, you’ll find four gelato flavors by the scoop—Tahitian vanilla, lemon with raspberry swirl, roasted strawberry chevre, and guava with liliko‘i swirl when I went. The guava and liliko‘i was my favorite, creamy and smooth with ribbons of tartness, rich, but less sweet than most ice cream. Food offerings are limited at the moment to a sampler of Sweet Land’s cheeses: fresh chevre, feta, gouda and tomme, a cheese aged for 15 months or more. Bring a cooler with ice when you head to the farm to stock up on cheese to take home.

Bello says when people visit, they tell her “I’ve lived here my whole life—where have you been?” I imagine Bello saying in her head, “Here, I’ve been here the whole time”—her agricultural roots run deep. Her great-grandfather purchased farmland in Wahiawā in the 1900s, her grandfather started a dairy and then an egg laying business, which Bello grew up working on before she started at goat dairies in Hawai‘i and California.

“People just can’t believe they’ve never heard of us before,” says Bello. But now you have.