Farmers Market Finds is a series that spotlights ‘ono finds at weekly farmers markets around O‘ahu. 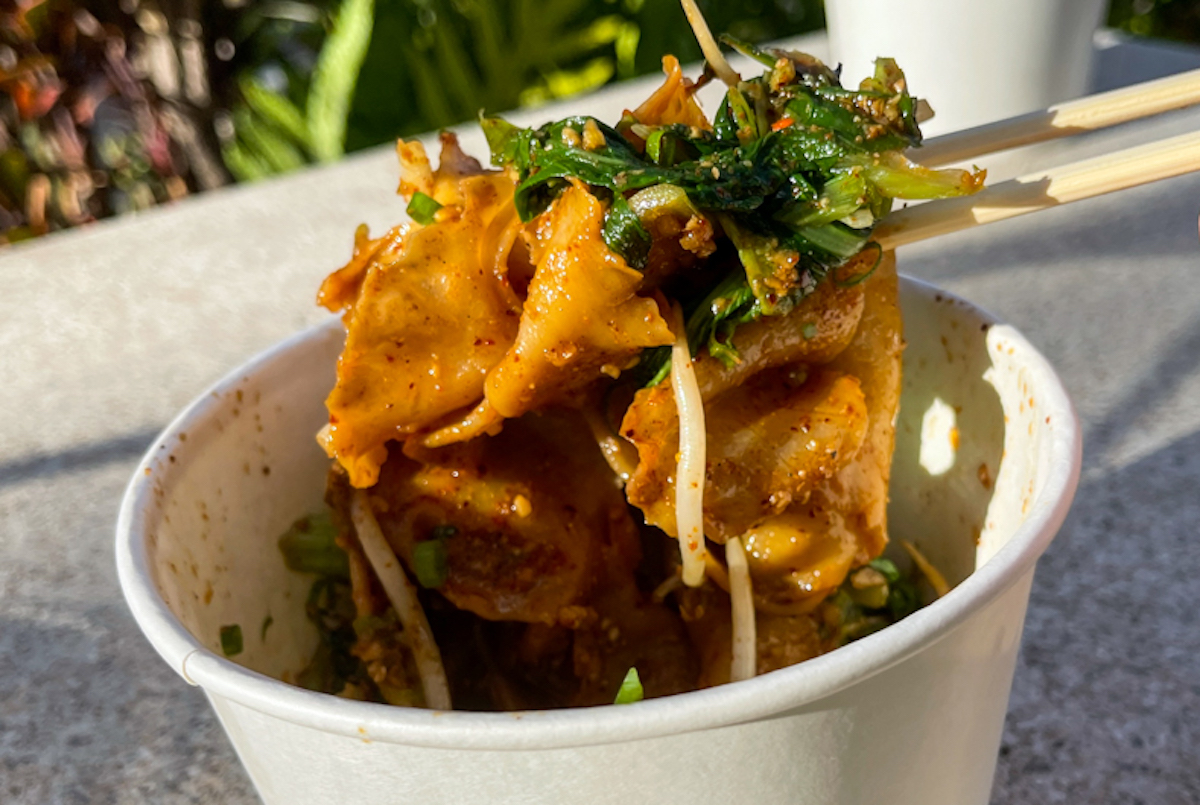 Early on a recent Saturday, I find myself among those setting their digestive systems on fire with mouth-numbing spicy noodles first thing in the morning. Hi, we’re not normal.

It’s a new year and there’s a new stall in the mix at the Kaka‘ako Farmers Market. It’s called Youpo Noodles Hawai‘i and it’s by Andrew Pressler, former executive chef of Chinatown’s shuttered Grondin French-Latin Kitchen and former sous chef at The Pig & The Lady. Pressler has since flown largely under the radar with his popular Indo-Malaya pop-up dinners. These feature the incredibly fragrant and diverse cooking of Malaysia and Indonesia, cuisines rarely represented in Hawai‘i.

SEE ALSO: This Is the New Luxe Local Ice Cream We’ve Been Craving

With Youpo Noodles, Pressler brings us closer to a different part of Asia. Youpo chemian, also known as biangbiang noodles, are a specialty from Shaanxi, the northwestern Chinese province whose capital, Xi’an, was the starting point of the Silk Road. These beltlike, hand-pulled wheat noodles originated as working-class street food and have exploded in popularity. I’m eager to give them a try. 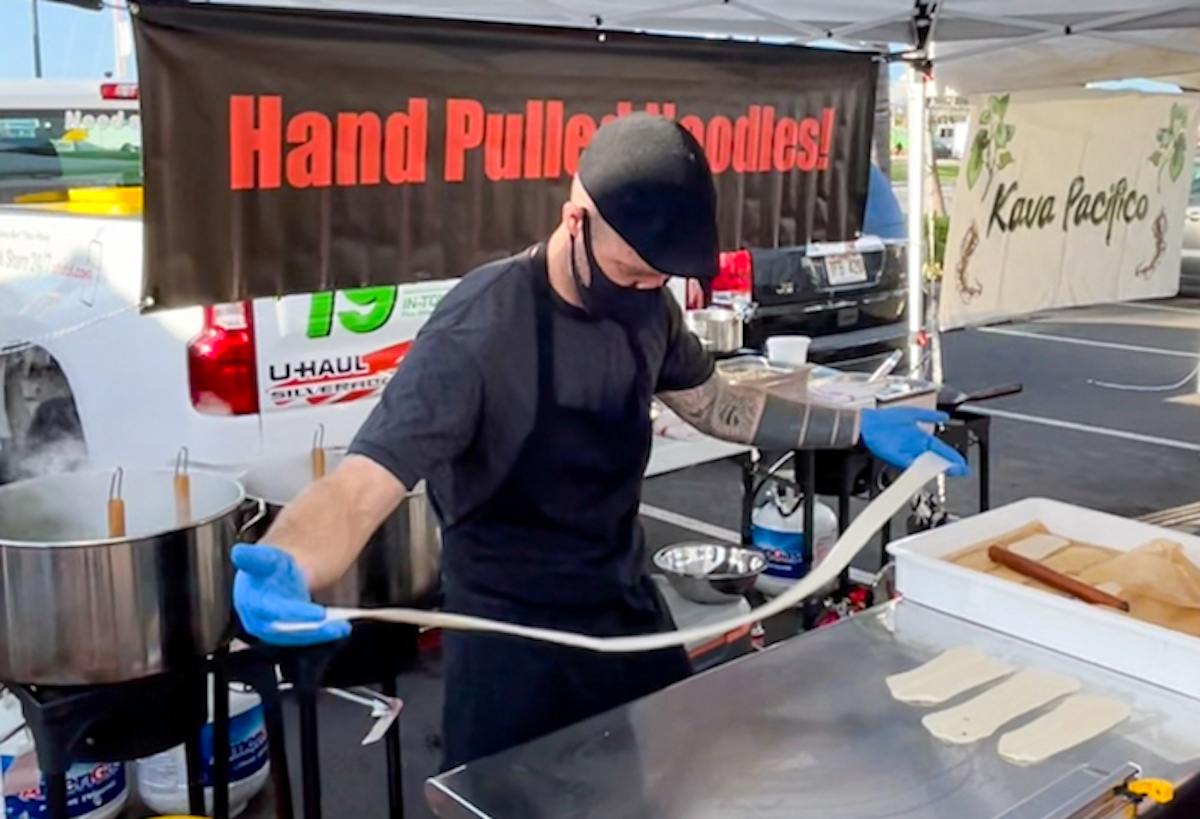 I place my order for a beef youpo noodle ($14). Pressler rolls out a portion of dough and stamps it lengthwise with a rolling pin, creating a shallow valley. He picks the dough up and swiftly stretches it out to five to six times its original length while slapping it against the table. In one motion, he rips it in half to form two large noodles and drops them into boiling water along with some greens.

The noodles take a couple of minutes to cook. Pressler shakes off the excess water, slides them into a bowl and tosses in braised beef, ginger, ground Sichuan peppercorns and soy sauce and scorches the mélange with hot oil to release their bold flavors. The noodles are slumped into a bowl with mung bean sprouts and a handful of scallions.

My friend and I quickly find a spot to enjoy our hot noodles. The thin, wide strands are chewy and could be mistaken for pappardelle pasta at a quick glance. Like a complete noob, I inhale the first bite and am met with the sting of chile and Sichuan pepper. If I didn’t sweat enough on my morning walk, I am now drenched and on the verge of tears. The numbing mala spice builds in intensity like a swarm of angry hornets. But it’s delicious—so I tuck in for more. 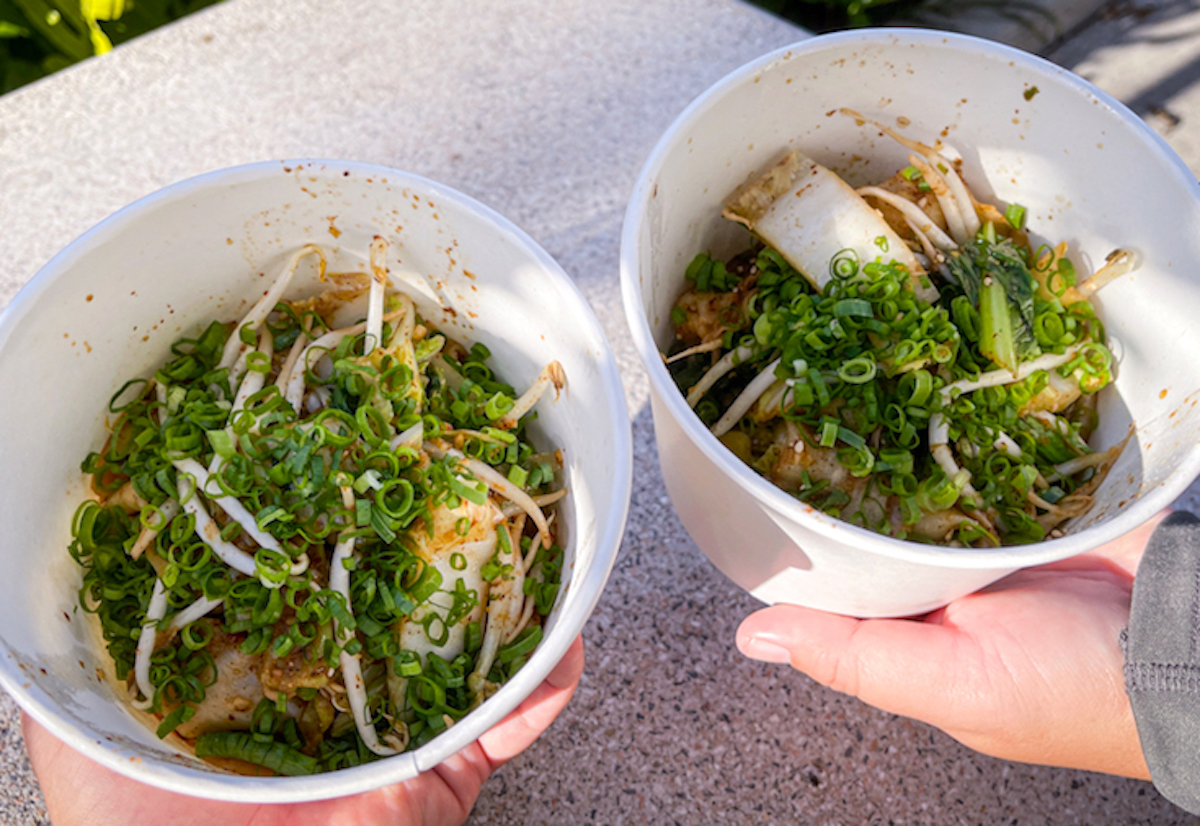 My friend lets me have a bite of her cumin spiced lamb noodles ($16) and I’m in love. They have the predominant warming spice of cumin throughout, but also a lingering heat. Other options I have yet to try are the vegan mushroom and tofu noodles and the pork and shrimp noodles seasoned with a Malay-influenced dry curry.

The menu board lists a gluten-free option and I am curious to find out how the gluten-free noodles compare with stretchy wheat noodles.

Youpo Noodles is just one of a few regional Chinese specialties to arrive on our shores in recent memory. Honolulu Skewer House, which specializes in northern Chinese skewers, just reopened on Kapahulu after its Makaloa Street location was razed for a new condo building. There’s also Simply Sichuan, which opened at Chinese Cultural Plaza in December, and SXY Szechuan, set to open soon at Ala Moana Center.