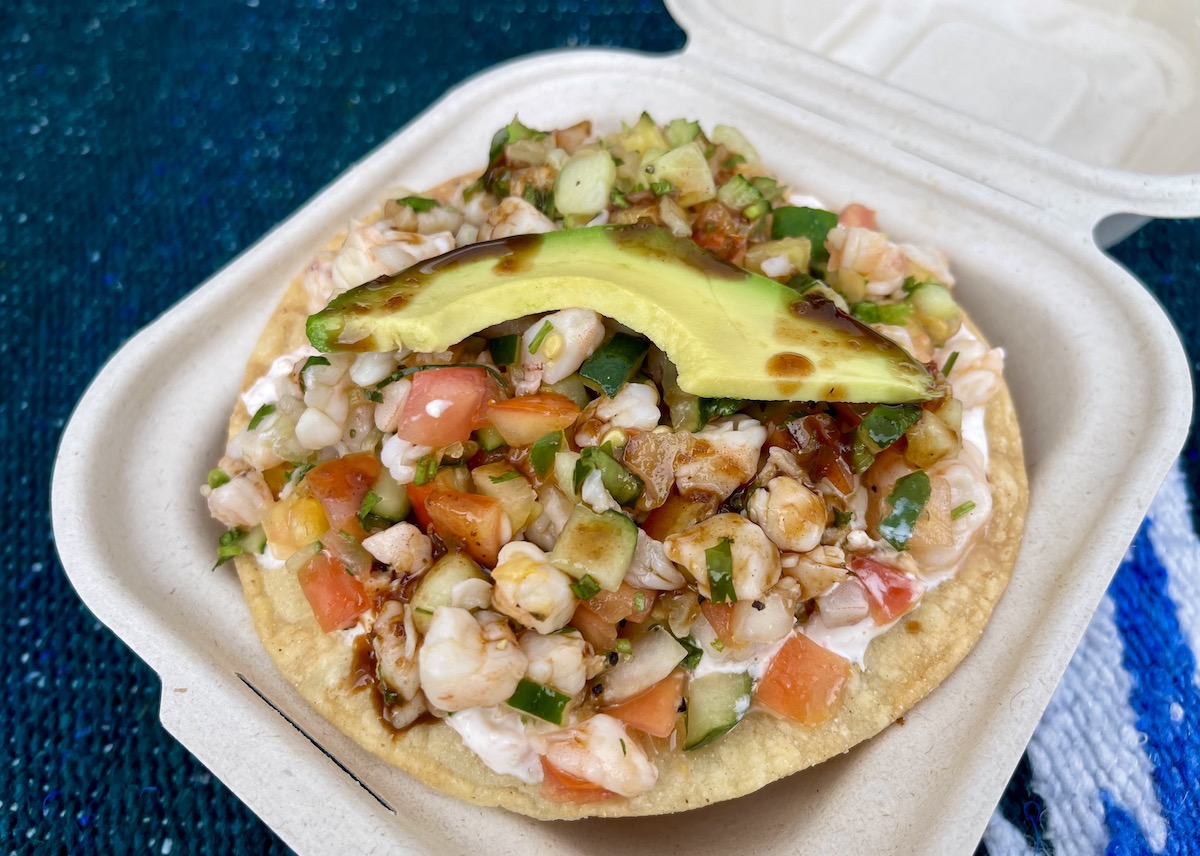 What: Northern Mexican ceviche tostadas and kits, and aguachile by special order (through Instagram direct message)
How much: $8 for a tostada; $20 for 16 ounces of ceviche, five tostadas and Black Sauce of Death; $30 for 32 ounces ceviche, eight tostadas and Black Sauce of Death; $15 for 10 ounces Blue Crab Tobiko Spread; $36 for a pan of shrimp and scallop aguachile (serves 4 to 6) and tortilla chips; $12 for 12 ounces of Black Sauce of Death
What markets: Saturday Kaka‘ako Farmers Market, 919 Ala Moana Blvd.; Sunday at Kailua Farmers Market, 1090 Keolu Drive
Vendor schedule: Saturday 8 a.m. to 12 p.m., Sunday 8 a.m. to 12 p.m.
Instagram: @daseafoodcartel

I ’ve been going to the Sunday morning Aloha Farmlovers Kailua farmers market since it was next to Pali Lanes. With a nice mix of made-to-order foods, produce and local staples, an early visit usually yielded a bounty of spoils and a pleasant vibe to boot. So when the market announced its move to the parking lot of Kailua Cinemas in Keolu, I was excited to visit, anticipating vendors new to the windward side. Walking down the single lane of vendors, I immediately find something new: a booth with a sharp-looking black banner, a colorful Mexican blanket and matching T-shirts worn by a crew that is clearly a family.

Da Seafood Cartel specializes in northern Mexican style ceviche—the kind found in Sonora, to be exact. It’s at two farmers markets, in Kailua and Kaka‘ako, and everything is made in-house: tostadas topped with a creamy blue crab tobiko spread and ceviche of fish, shrimp, a mixture of these, or plant-based (soy curls), plus slices of ripe avocado and their special Black Sauce of Death. An option of ceviche kits include everything you need to construct your own tostadas except for the spread, which you can buy on its own. Luckily for me, the week I go they’re featuring a special pre-ordered pūpū pan of scallop and shrimp aguachile topped with cucumber, red onion and jalapeño; you pour on the accompanying aguachile sauce as a marinade. They give me a pan of this when I arrive to pick up my pre-ordered ceviche kit. This is my second visit; the first, when I tried a tostada, turned me on to the charms of Da Seafood Cartel, so my mouth is literally watering and I have to get a shrimp and fish tostada to eat standing outside of my car. 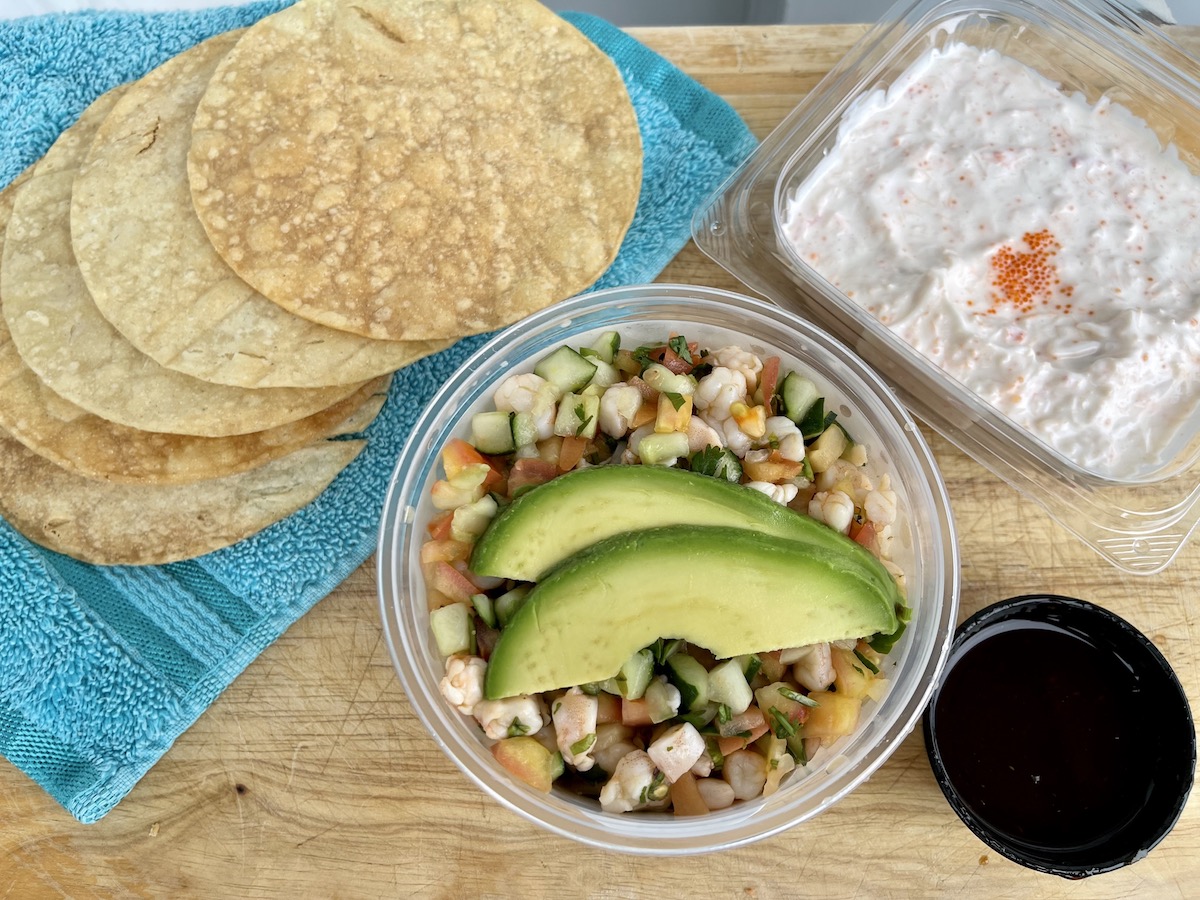 For me a good ceviche means you shouldn’t need to add anything to it—this is that ceviche. The tostada is golden brown and crispy, making it a stable base for the juicy mixture; the blue crab tobiko spread acts as a creamy barrier between the two. Tiny pops of tobiko and sweet strips of crab add lusciousness to the tart combination of shrimp, fish, onion, cucumber, jalapeño and tomato. My favorite aspect is the smallness of the pieces, so when you take a bite you get everything. The onion is cut so small, balancing the proportions of the other ingredients and adding to the song of flavors instead of standing out as distracting. 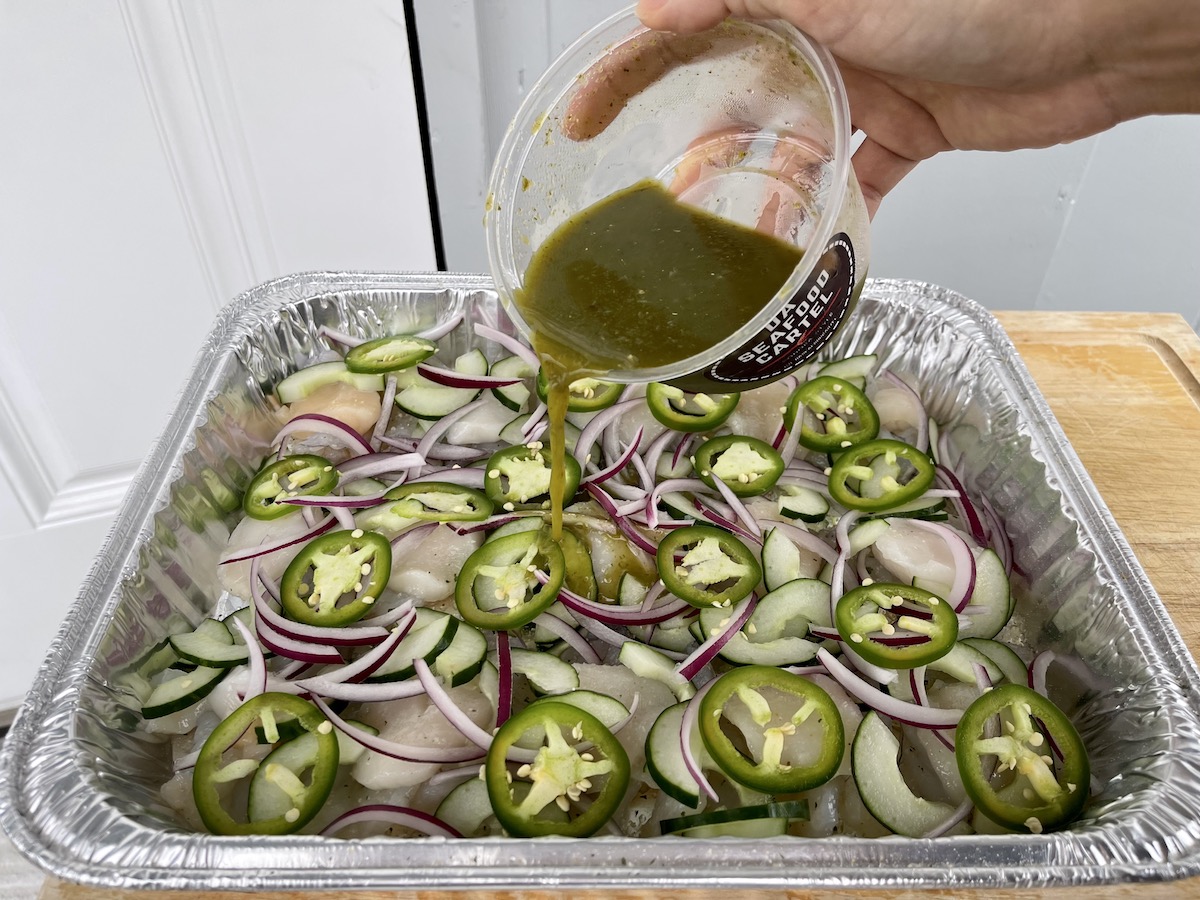 The aguachile I’m super excited about because it’s so rare in Hawai‘i and when you do find it, it’s usually missing something. Unlike ceviche, aguachile is served shortly after you add its sauce, emphasizing its freshness. The sauce is made by blending lime juice, chiles, aromatics and other ingredients, including the skin and pith of limes, giving it an extremely tart flavor that, balanced with salt, becomes punchy. My pūpū pan comes with fresh sliced scallops (ahem, yes!), butterflied shrimp and crunchy accoutrements. When I get home and open the aguachile sauce, I start involuntarily drooling. After gathering myself I pour the sauce over the seafood and tilt the pan to make sure everything is covered. Ten minutes later it’s ready to enjoy with the accompanying fresh tortilla chips. These are light on salt, which makes sense because the scallop, cucumber, jalapeño and red onion mix has an intense salinity. It’s so good I want to slap someone. The texture of the scallop is buttery; the sweetness of scallop and shrimp balance the superbly seasoned marinade. Just so fresh. Ten out of 10 would recommend for your next potluck, especially at $36 per generously portioned pan.

The blue crab tobiko spread is something I’ve never heard of, but it feels like a local connection. Amanda Cordes, Da Seafood Cartel’s 25-year-old owner, tells me that her mother is from Sonora and her father from Pearl City, and they own the longstanding Forty Niner Restaurant in ‘Aiea. And just as it is with poke in Hawai‘i, in Mexico each family has its own ceviche recipe, so Da Seafood Cartel marries its dual culinary heritage. Recipes for the ceviche are from Cordes’s family in Sonora, and the rich and tangy Black Sauce of Death is inspired by a popular Sonoran salsa used with seafood.

I’m impressed by this farmers market gem. If you’re a ceviche lover or a fan of citrusy fresh seafood, Da Seafood Cartel is your move.