In a sea of hot pot restaurants, Eat on Time stands out with items popular in China but not found elsewhere in Honolulu. 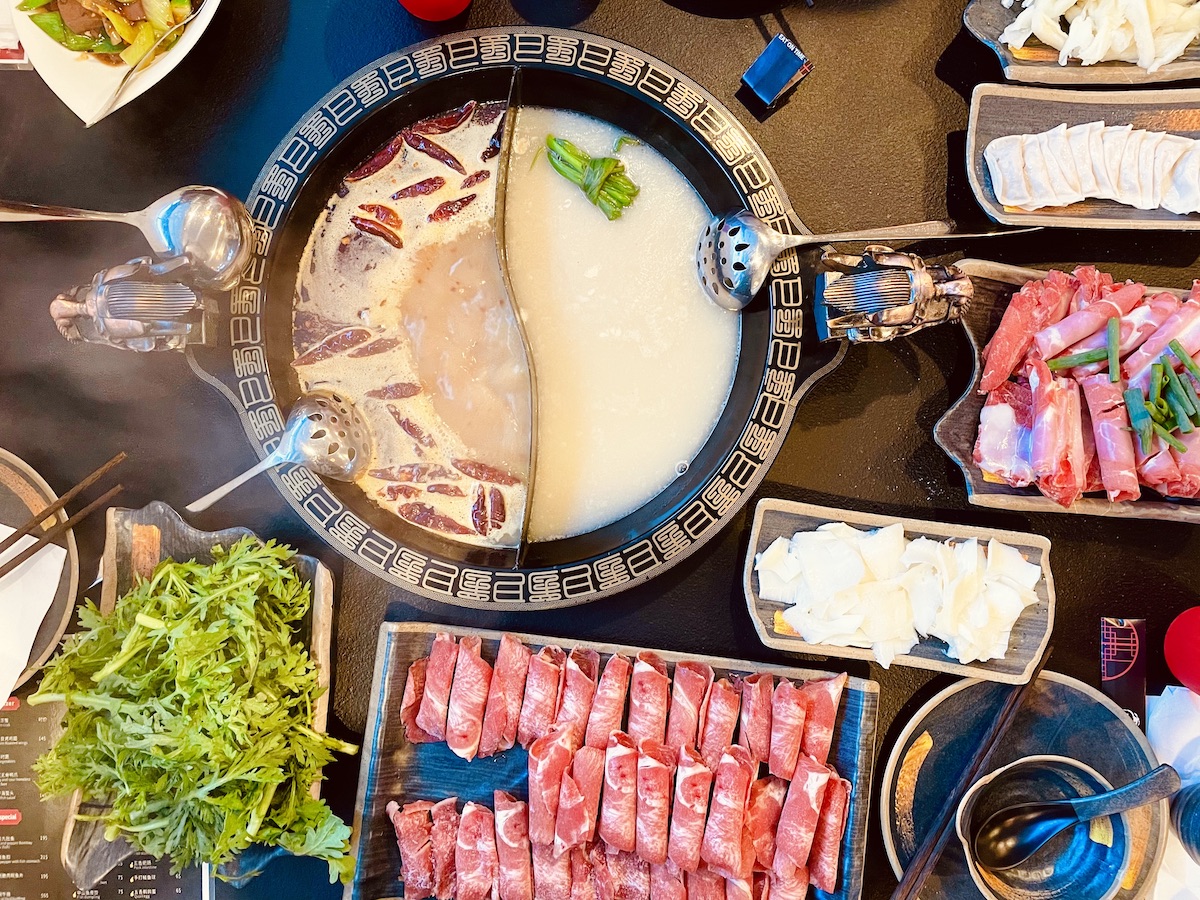 At Eat on Time, a Chinese hot pot and seafood restaurant that opened a little over a year ago, you’ll find items offered nowhere else in Honolulu, like “crystal sliced beef” and beef aorta and duck blood and Bombay duck (which is actually a fish). And that’s entirely by design. Kai Lin, the owner, and originally from Fujian, says what’s trendy in China immediately makes its way to the continental U.S., and then, a few years later, arrives in Hawai‘i. But with his restaurant, he’s bringing what’s hot immediately to Hawai‘i.

So that means for the hot pot, “crystal beef” ($14), which arrives as thinly sliced meat drizzled with milk, though to my taste, the milk doesn’t add much. Then there’s beef aorta ($9)—pure white slices where it’s all about the firm, chewy texture, like mirugai, but without the sweetness…and a lot tougher. Try it for the novelty, but be prepared to chew—a lot. You can even get boneless duck feet ($7), a marvel at absorbing soup and sauce seasonings into its cartilaginous nooks and crannies. My favorite of all the hot pot options are what’s labelled in English as “fish dumplings” ($7), but the wrappers are actually made with fish and flour, giving the dumplings more bounce and flavor. 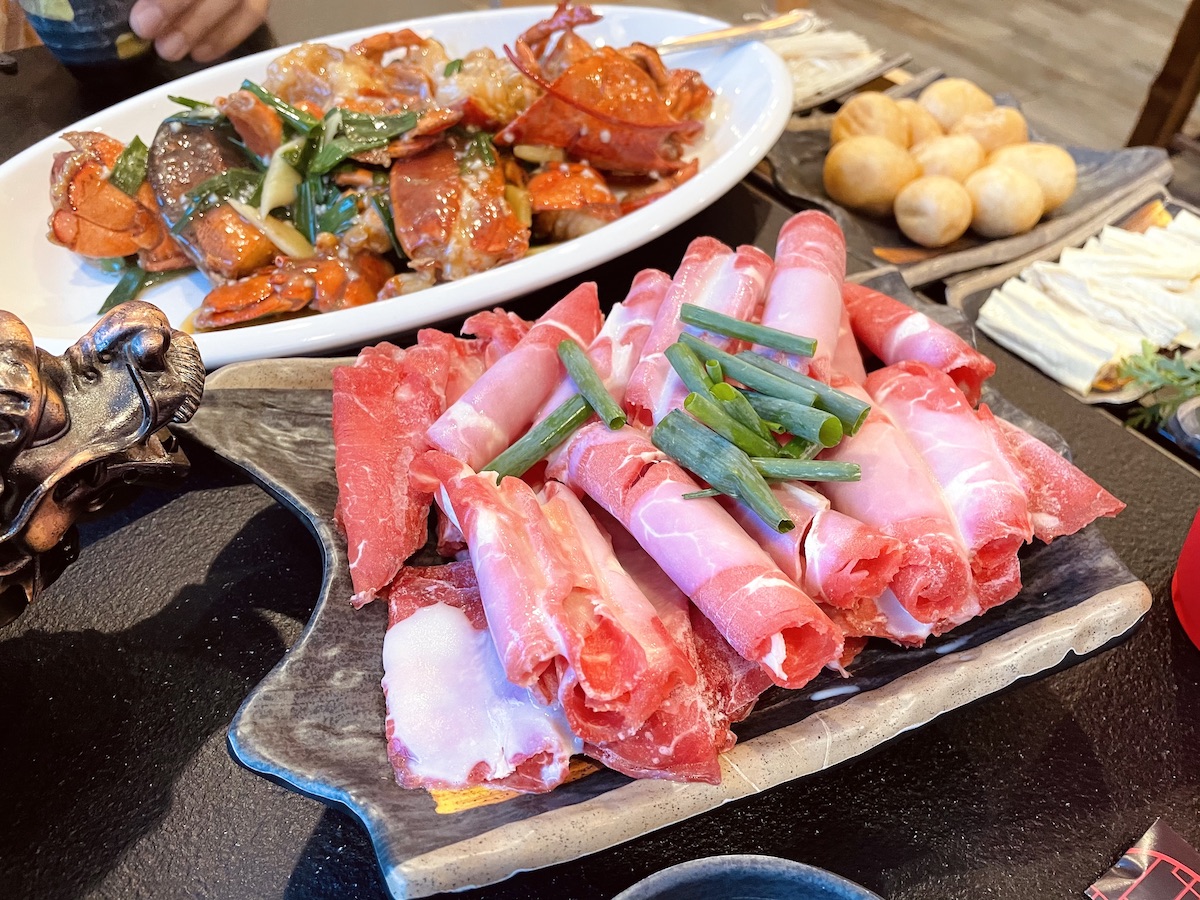 Of course, you’ll also find more common hot pot items—veggies and tofu including oyster mushrooms, lotus root and crown daisy (also known as chrysanthemum greens). Finish off with the thick handmade noodles ($3) to soak up all the broth—we chose half Sichuan spicy and half bone soup for the perfect yin and yang. The soups are flavorful enough on their own that you don’t really need dipping sauces, but you’ll find them at a serve-yourself counter at the back of the restaurant.

Eat on Time also specializes in live seafood—Lin is a seafood importer as well, bringing in geoduck for Japanese sushi bars, lobsters from the East Coast and other seafood from Hong Kong. A lot of items aren’t often available, however—I’ve been thwarted multiple times in trying to order crab and geoduck. More consistent is the lobster (2 for $29.99), stir-fried with lots of green onion, ginger and garlic. I always order the salt and pepper Bombay duck ($19), one of the ugliest looking fish around (Google it), but when Eat on Time fries it, it turns into the most delicate, airy and crisp fish nuggets you might ever have. 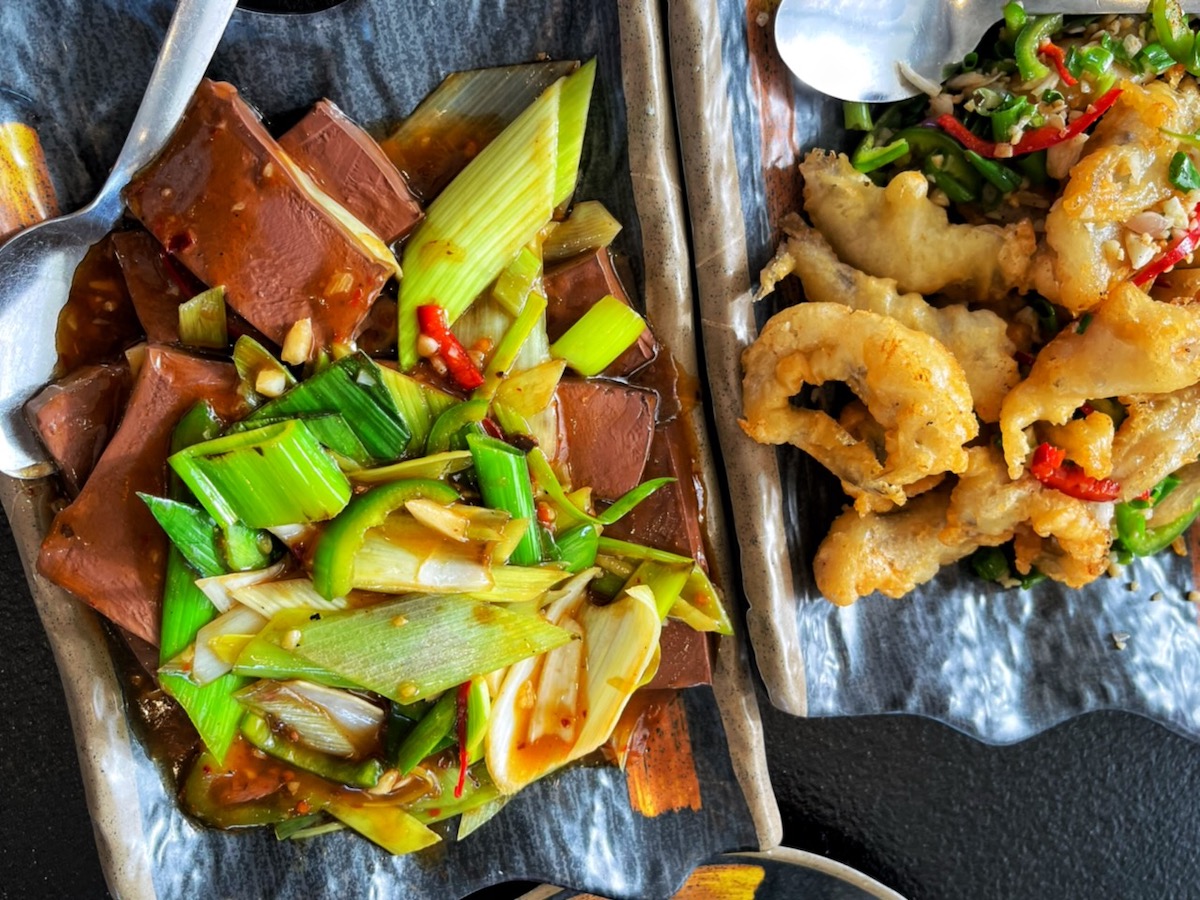 My other favorite stir-fried item is the duck blood with garlic shoots ($16)—the sliced blood is soft and supple, like silken tofu, and paired with tender and sweet stems. I tell people skeptical about trying it that it’s like chocolate tofu, but I’m not sure that sells it either.

Eat on Time doesn’t have dessert, which I crave after a steamy and spicy dinner, but they do have fried buns ($9)—mantou fried to a crisp served with condensed milk. They’re meant to be eaten with your meal, but I enjoy them from start to finish, since they’re basically like glazed donuts. Or, pick up a custard pie, silky and loosely set—more akin to a flan—from Epi-Ya Boulangerie and Patisserie next door. Eat on Time is also currently BYOB, in case you need some liquid courage for your Eat on Time adventure.