Formerly at the Royal Hawaiian, the Hawai‘i chef now serves upscale comfort food at farmers markets and events with his C4 Table.

HONOLULU reached out to three chefs for their views on a changed and changing industry and how it’s reshaped their lives. 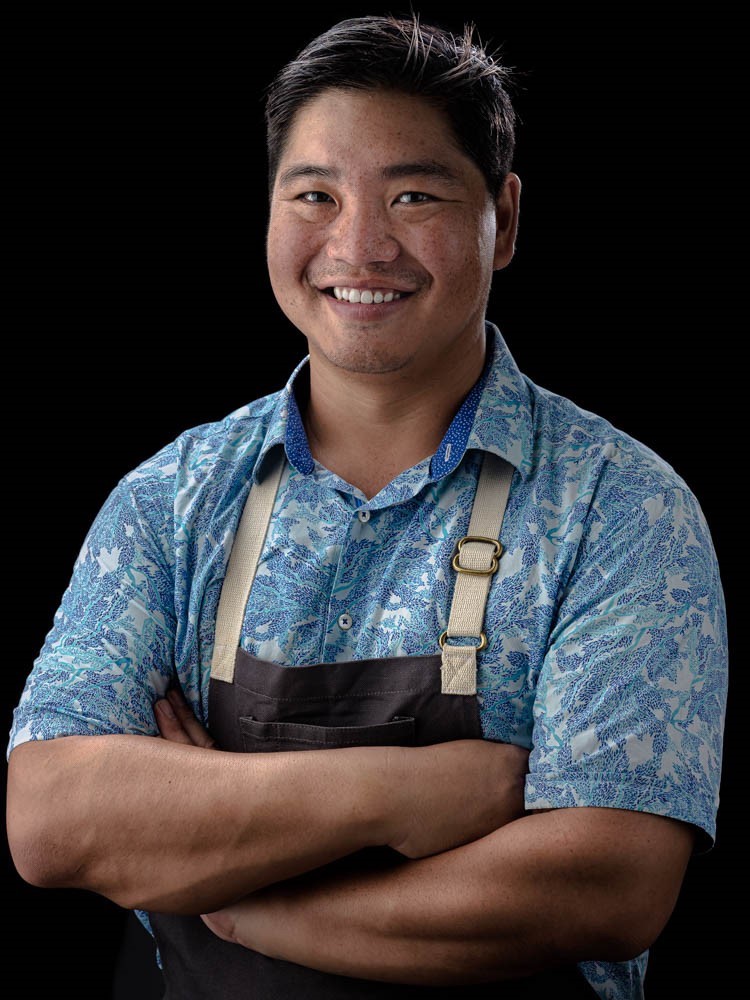 Colin Hazama steadily rose in the local food scene, mentored by culinary stars Jean-Georges Vongerichten, Alan Wong and Roy Yamaguchi. Hazama was a semifinalist pick for the James Beard Rising Star Chef award in 2010, when he was chef de cuisine at Vongerichten’s Kaua‘i Grill at the St. Regis Princeville Resort. Twelve years later, he was executive chef at the storied Royal Hawaiian when he lost his job to the pandemic. Hazama used the unexpected downtime to launch C4 Table by Colin Hazama, establishing himself in a new niche of upscale comfort food.

Hazama these days does plenty of catering gigs, has created a line of locally inspired gummy bears, and cooks inspired take-home meals at farmers markets. At the Hawai‘i Farm Bureau’s Blaisdell Center market on Wednesdays from 4 to 7 p.m, and Kaiser High School from 4 to 6 p.m. most Tuesdays, Hazama dishes up elegant and tasty dishes including smoked pork belly bacon bao buns, jasmine-tea-steamed fresh fish, and Asian cioppino. He’s thinking of doing popup wine dinners that showcase local farm products as well as locally caught fish and seafood unique to Hawai‘i to create a dining experience not often found at markets or in restaurants.

Here are Hazama’s views on the industry he’s known for 20 years, as told to HONOLULU Magazine.

How has your work-life balance changed?

My schedule can be anywhere from four or five days up to six, seven days, just depending on what’s happening. That’s probably doubled the amount of time I get to spend with the family now, so it’s been a lot more flexible and I’ve been able to hang out more. If I need to, I can pick up my son and then take him or drop him off to my mother or my mother-in-law, who help me out. It’s just more flexible. Whereas when I was at the hotel I was pretty much in the grind and couldn’t really leave meetings or banquet functions, or something was happening in the restaurant. Some days I still do a 10- to 12-hour day. But for the most part, it’s more 8- to 10-hour days.

What’s happening with our restaurant scene?

I think the pandemic has really changed the dining scene. Eating out for three, four hours and enjoying this lavish course meal at a chef’s table, having wine pairings and enjoying the whole atmosphere is to me a little passé. And it’s not really what people want. There’s still restaurants that are doing that, but I would say that they definitely don’t have a big impact. People want to have things to go or they want to go into a restaurant, have multiple share plates or just something to eat and get out of there within an hour, hour and a half. The restaurants that were doing the full-fledged prix fixe dinners and grand experiences, probably a big majority of them have either shut down or they’ve downsized and come up with new concepts of having takeout meals or create-your-own-meal kits at home.

The definition of a restaurant has changed. Like I had the experience at Bar Maze with Justin Park and his team. We were at the front of the counter/bar. Bars are that kind of new eclectic speakeasy where it’s a little more laid back and yet still very formal in terms of the quality of product that people are getting, but not so much the service aspect of having the waiter come to you every single course.

SEE ALSO: How the Restaurant Industry Bubble Popped While You Were Scrolling

Hawa‘i’s food movement, I think it’s always been its own cuisine. We’re really well known for that and it’s something that’s very honorable. The dishes that people are preparing are becoming a little more cultural, ethnic, deep, and flavorful, comfort-food kind of dishes. When I see restaurants staying true to where they are and people gravitating toward that, it just makes me really happy because that’s what Hawai‘i really is about, what our food and cuisine is about. 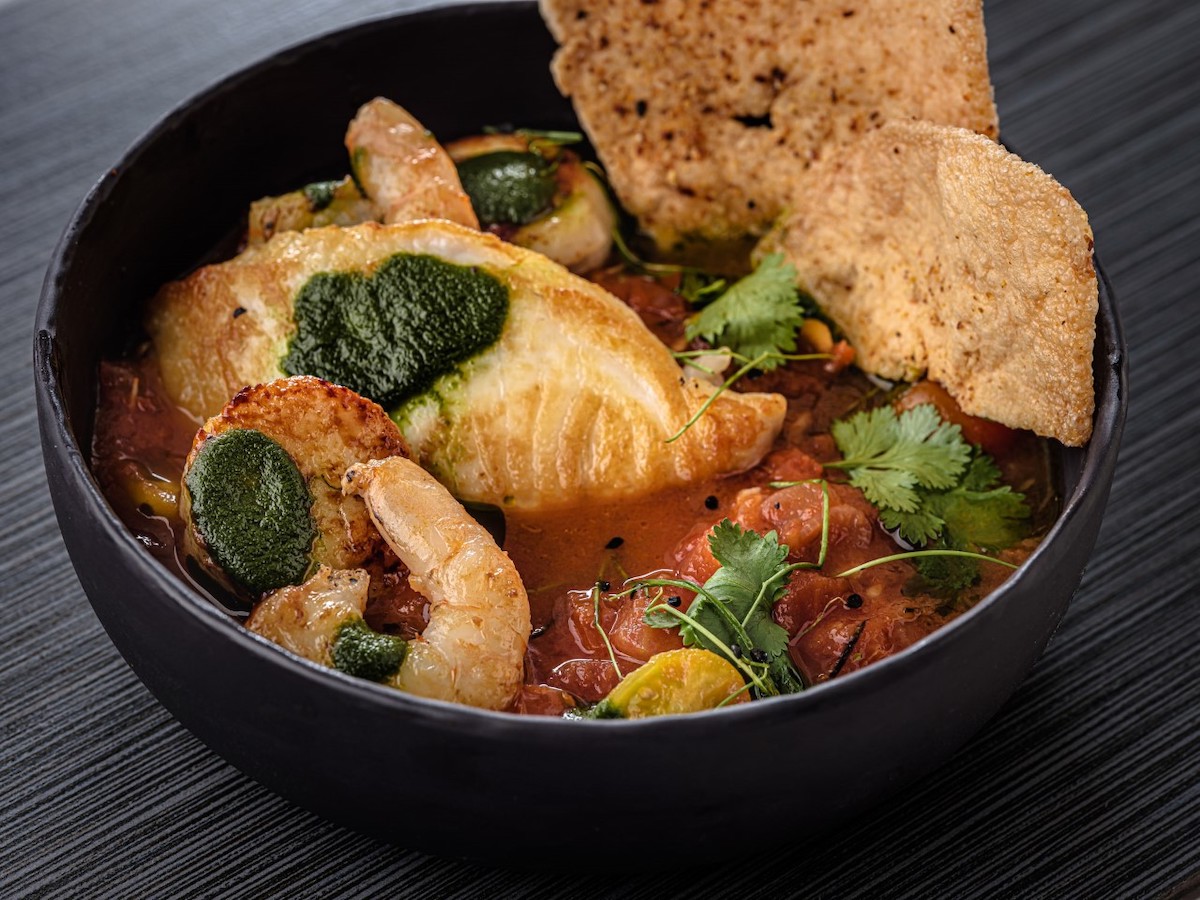 What about food fads?

Some restaurants that still do birria tacos and stuff do pretty well. But mochi waffles, mochi things, it’s not really to me a cuisine that makes sense, but it’s trendy and everybody wants to get it. So all the social media gravitates toward that and then two months from now it just fizzles and it goes on to something else.

I would like to feel and hope that the people of Hawai‘i will always enjoy and gravitate more to what our ethnic plantation kind of cuisine is about, and source from all the local farmers. Because I feel like there’s been this movement in the last few years where a lot of the farmers aren’t really getting that support as much as they were from the late 2000s all the way through 2019. It was really booming and it was what everybody was pushing to do—buying from the different farms and buying local products. [Then] we went back to importing more food. I’m hoping that the farm movement continues to grow in Hawai‘i.

My next step is to basically invest and grow with the company business; to get my own brick-and-mortar, but really focus on having the grab-and-go or takeout. If I do have the dining experience in my restaurant, it will be more casual where you order and pick up and just enjoy the food. I would probably have staff clear the plates. The food and experience would be similar to how Jon Matsubara has at Feast 808. It’s a little lower overhead, while still giving that quality in the food and experience.

I also want to have a little bit of a market concept with components that you can buy already pre-packaged. You can take home some of the pickles, for instance. I do like frozen bolognese sauce or frozen chowders you can take home and reheat. And I like the concept of having somewhat of that okazuya experience, but not early morning. It would be late morning or midday, because I feel it is a kind of nostalgic dining and the old okazuyas are fading out. Okazuya with my twist on the food would be a part of the daytime experience. Then that early evening experience would be more what I do at C4 Table.”