Street food represents the essence of a city’s food culture. It’s accessible, affordable and prepared right in front of you with such finesse that each step appears more like mesmerizing choreography. 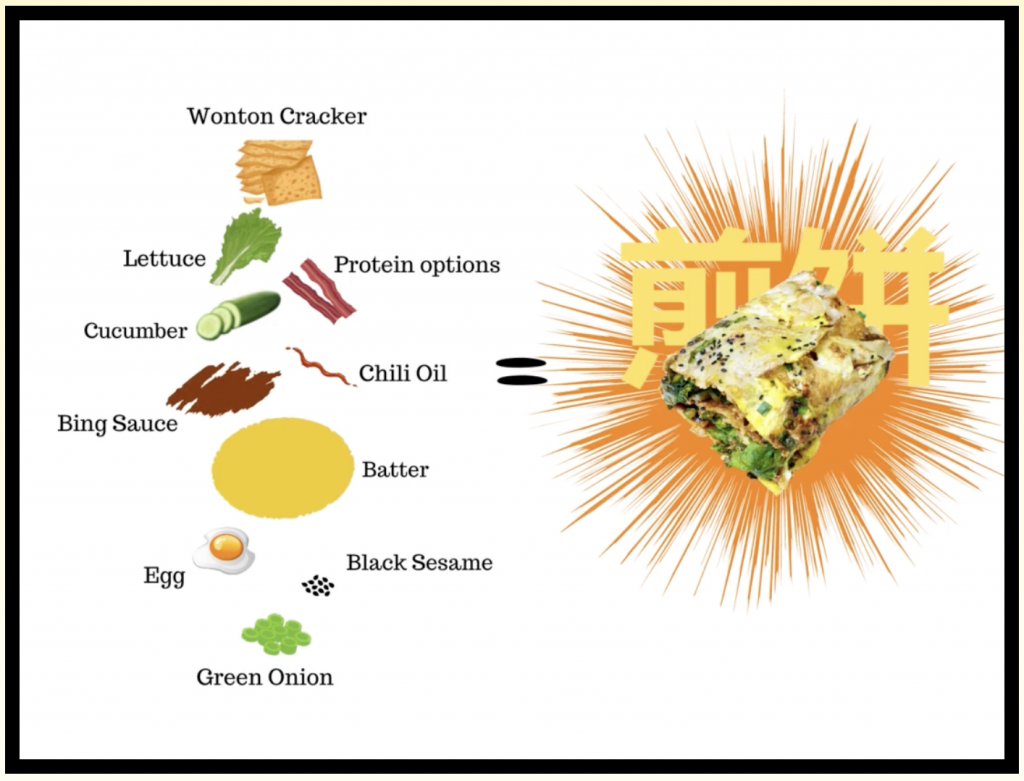 One street food item that tastes as captivating as its preparation suggests is jian bing, or large savory crepes from Tianjin, China. Made to order with wheat or mung bean batter, they’re similar to Indian dosas, though not as crispy. Here’s where the two crepe styles really deviate: With jian bing, an egg or two is cracked on top of the crepe batter and spread out evenly to cook faster. A shower of cilantro, green onion and black sesame seeds blankets this side before the crepe is flipped. On the other side, sweet hoisin-style sauce and chile oil are brushed on before the savory snack is topped with crispy wontons, pickles, veggies and sometimes pork or tofu. Then it’s folded, halved and served like a steaming hot sandwich.

Jian bing are one of the most popular breakfast options you’ll find in China. Bing Bros founder Beldon Lee got hooked on them while working there—he discovered a jian bing vendor on the way to his office and loved them so much, he decided to bring them stateside when he returned home to Hawai‘i. About five years later he resurrected his plans and began perfecting his recipes at home before launching Bing Bros earlier this year.

Since June, Lee and Justin Makizuru have been wrapping everything from wontons, kim chee and cucumbers to ham and cheese in their jian bing. The Hawaiian Breakfast jian bing ($13) is a hefty melange of Spam, egg and Portuguese sausage with standard fixings like lettuce, pickled mustard cabbage, fresh herbs and sauces. I prefer the lighter, signature jian bing ($10), which is made with egg and no meats. It’s fresh and crunchy, a gratifying balance of sweet, savory and spicy all in one bite. Other creations feature lup cheong, char siu, candied bacon and tomato, ham and cheese, and pork floss.

Find Bing Bros every Saturday from 10 a.m. to 2 p.m. (or until they sell out) in the green tent at Teapresso Salt Lake behind Target. Online preorders are recommended.