Battle of the chili dog plates

Zippy's or Rainbow Drive-In: Which one mo' bettah?

For me, growing up in Aiea, Rainbow’s has always had kinda that townie mystique. All da kids who lived townside would talk about Rainbow’s. One of da dishes dey talked about da most wuz da chili dog plate. But I never bothered for try ’em, cuz I already had my favorite. I grew up fully loving Zippy’s chili!

In recent years Rainbow’s has started its westward expansion. Since get one Rainbow’s at Pearlridge now, I decided for give ’em one chance and try sample their chili dog plate for see if theirs is one chili contender or one chili pretender. Will it be able for compete against Zips? 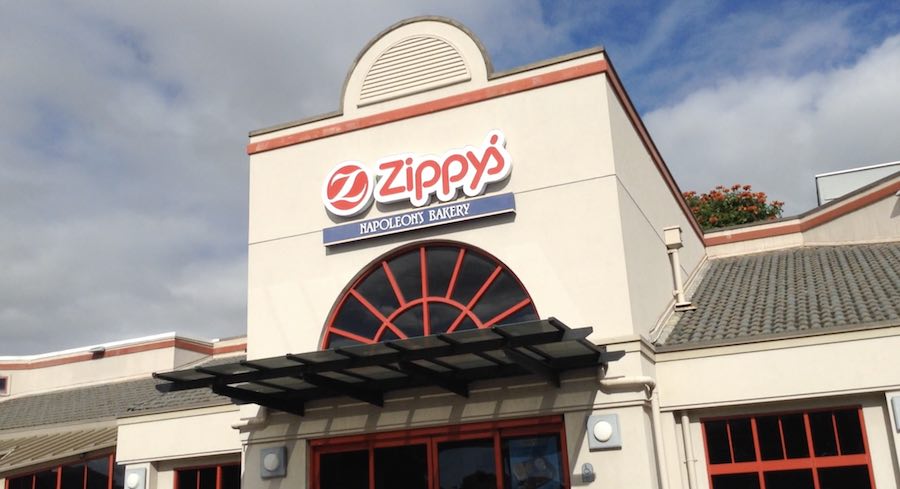 I learned someting while on this assignment. I remember back in da day Zippy’s had da Chili Dog Plate and Chili Frank and in order to avoid confusion da waitress would always make it one point to ask, “The one with the bun?” Chili Dog wuz da one with da bun and Chili Frank came with rice and mac salad. But when I went here recently, da waitress informed me that they nevah have da Chili Dog plate for awhile now. I used to order those two dishes a lot during college, but nowdays I more budget conscious so I usually just buy da chili, take ’em home, and add my own rice and hot dog. Lol. 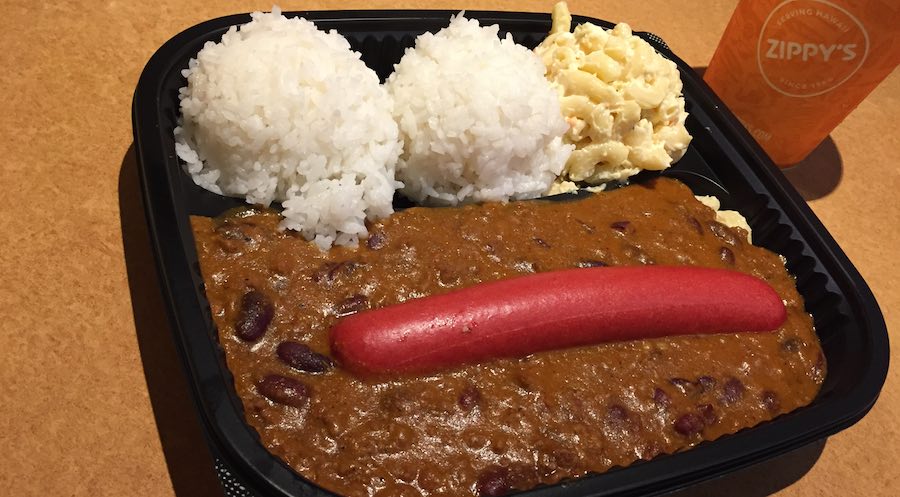 Name: Chili Frank Plate
Cost: $8.95
Size: Regular
What get inside: Chili, hot dog, rice and mac salad
Hot dog count: One
Hot dog texture: Just right. Not super soft, but also not super crisp where it has that bite
Chili: Uniquely creamy-like
Mac salad: Perfection
Rice: Two scoop
Tip: You can get veggie chili or beanless chili instead of da regular one 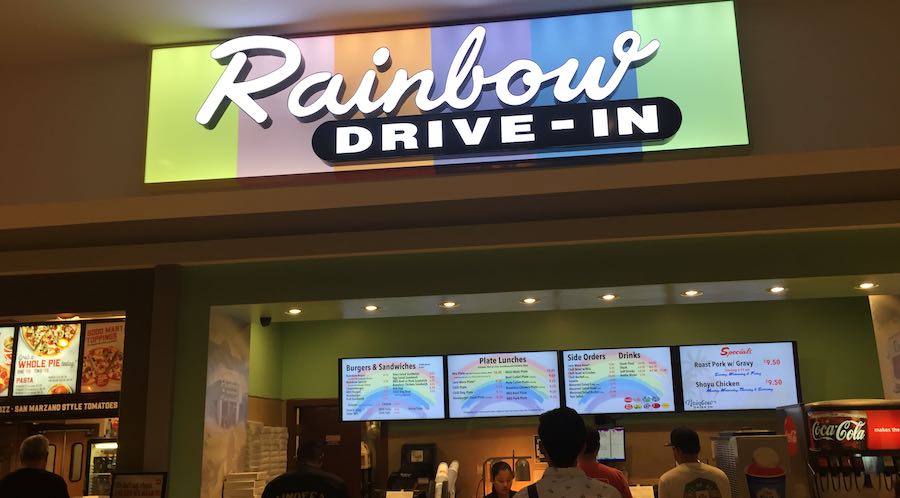 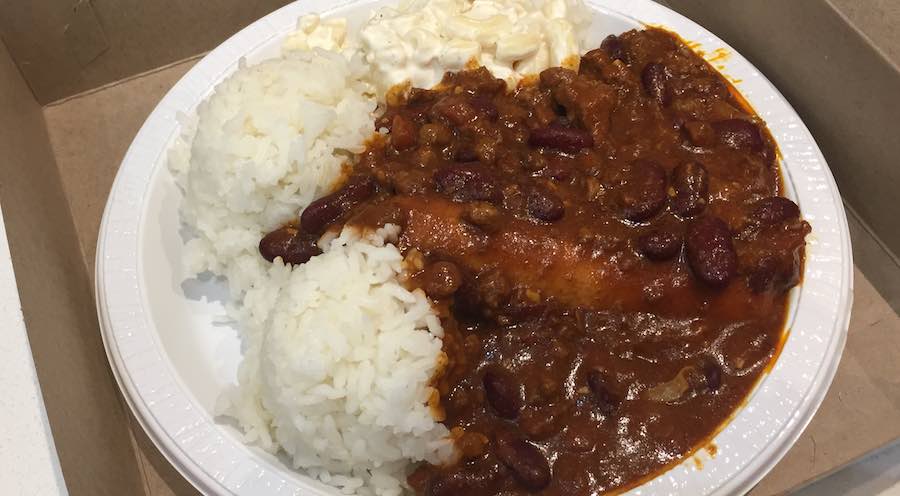 Cuz I never had da Chili Dog Plate at Rainbow’s before, I wuz in for quite one surprise. Da ting appeared for have just one hot dog, but I started eating and I wuz all like what this ting on da bottom? Come for find wuz one SECOND hot dog hidden underneath all da chili! Whaaaaaat?! 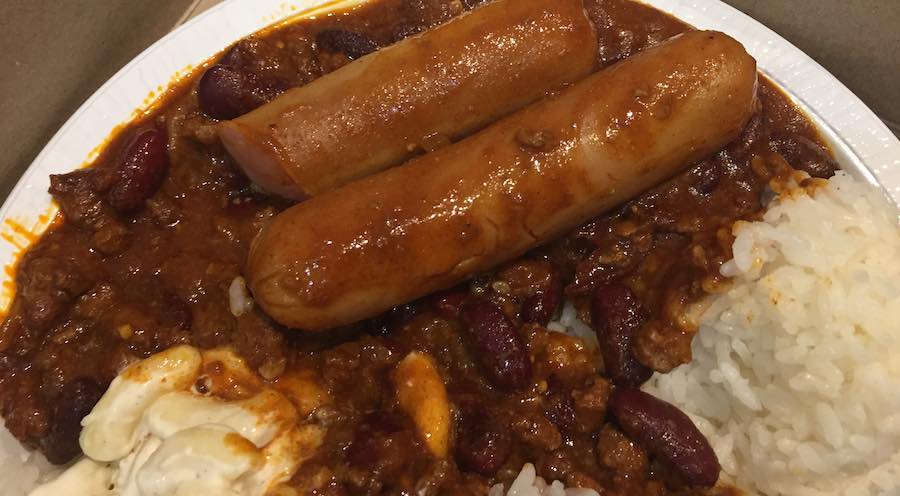 Hea what dey get in common:
Basically da same ingre-da-ments.
Each get their hardcore devotees.

How dey stay different:
Taste-wise, no can beat Zippy’s one. Lotta people say Rainbow’s one tastes homemade. And dey mean ’em as one compliment. But to me homemade means I can make my own that would taste pretty close to Rainbow’s. Zippy’s chili no can duplicate, brah. I tell you, I failed how many times trying for make my own homemade Zippy’s chili. Is da secret ingre-da-ment really mayo? I like know!

To sum it up:
I stopped ordering Zippy’s Chili Frank cuz wuz getting more expensive and it wouldn’t make me full anymore. And I not sure if das cuz I wuz skinnier in college so I ate less or if it’s cuz Zipppy’s portions shrank. Could be both. Lol.

Rainbow’s one stay little cheaper and you double your dog, plus da chili more meaty and beany, and thus mo’ filling. So if this wuz about bang for your buck and more food for your money then Rainbow’s would win.

Unfortunately that no mattah, cuz this battle wuz all about onoliciousness, baby. Das why Zippy’s is still da chili champ. #nomonomoono

See also: Battle of the chili dog plates: Round 2