Lynda Hess sits cross-legged on a flat cushion on the floor of her home studio, which is now covered by an 8-by-8-foot square of blood-red poster paper. She’s working on the final template for her installation in Artists of Hawai‘i Now. Most people in the art world know her for her bold, powerful paintings focused on women’s issues. Some of them hang on the walls, along with pieces by her 14-year-old daughter. But since moving into her studio space a few years ago, she realized she couldn’t live with the paint fumes and turned her attention to clay flowers.

Hess never thought she would venture into the world of 3D art, yet here she is, methodically leaning off her cushion to reach a small white flower rimmed with red paint, among about 125 others spaced just so. With a Sharpie, she makes a dot on the template through the flower’s hollow bottom so she knows exactly where its center is. A double layer of tape with a number written on it, attached to the template, serves as a code for where that particular flower will go on the gallery wall. She writes this code onto the bottom of the flower.

“I never, ever thought of being a 3D artist.”

Every hand-formed flower is unique: That’s important to the piece, Hess says, as each one represents a victim of domestic violence. If the wrong one is placed or is slightly off, it will change its relationship to those around it. There are no straight lines. She moves on to the next one. Only a few more to go before she can complete the template and mark the thousandth flower.

“A voice told me I had to make 1,000,” Hess says, noting the healing aspect of something ritualistic, as with Sadako Sasaki, a Hiroshima bombing survivor who was diagnosed with leukemia at the age of 12 and began folding 1,000 paper cranes to, as Japanese folklore says, earn a wish so she could get well. Hess’ final piece will be a room that can accommodate just one person at a time, surrounded by white flowers on every wall and even the ceiling. This wasn’t Hess’ original intention, for an audience of one. “To me that seemed so awkward. I wanted people,” she says, “not a person.” As she continued to work through the pandemic, when instances of domestic violence increased as people spent more time—sometimes trapped—at home, she says the main theme of her piece evolved to be about isolation. She’s hoping people will experience the energy from these flowers, similar, she says, to the way some people feel energy around the pyramids in Egypt and other places. 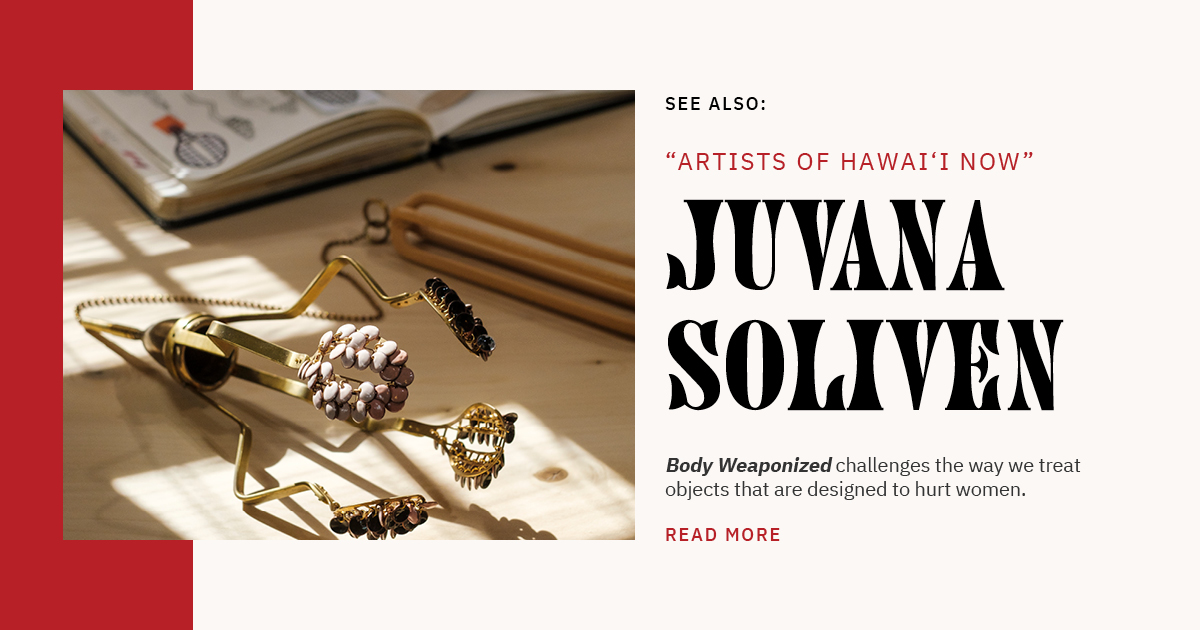 Hess made about 1,500 flowers total so that she could select the best thousand, all hand formed over the past three-and-a-half years—in fact, she made 600 within the first six months. They’re fired to bisque temperature, then painted, dried and briefly baked again to set the paint. This isn’t typical—ceramic pieces are usually bisque fired, glazed and then vitrified at a higher temperature, but Hess likes the color of the bisqueware and the viscosity of the paint she found. “There’s a lot of prejudice in clay. No one shows bisqued work. I wanted this particular effect,” she says, in comparison to the off-white the clay turns at a higher temp. And as for the paint, she was particular about the vibrancy and thickness in order to give the feeling of blood. 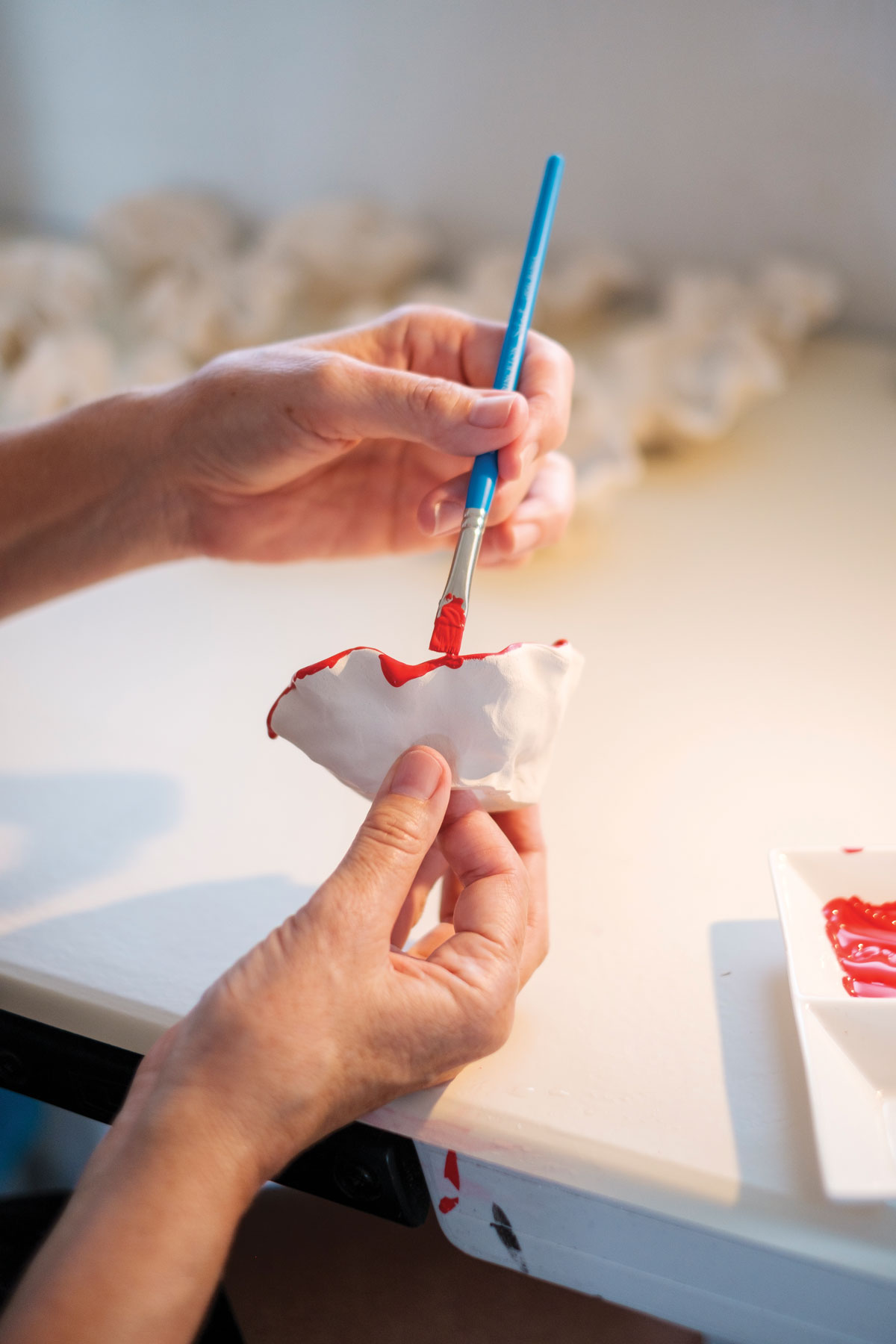 Hess chose to paint the flowers rather than glaze and fire them. “I wanted a feeling of blood, a certain thickness.” Photo: Aaron K. Yoshino

Most flowers have been labeled, wrapped and put away until showtime, though, on this day in July, there are others scattered around the studio—a few dozen that have yet to be painted are on a shelf, one that’s broken is on the floor near the windows streaming in morning light reflecting off the pool. I don’t ask what she thinks these represent. But she says something I can’t stop thinking about: As a woman, “the specter of violence is always around you.” The small flowers remind Hess of children.

In the corner of the studio, Hess has put blue painter’s tape on the floor and walls to mark the dimensions of the space she has been given for her display. She was told that people need to be at least 2 feet from each wall of the enclosed space. To help visualize, she’s made smaller models out of cardboard.

Volunteers helped paint the flowers through workshops with the Domestic Violence Action Center. When she showed a smaller version of this piece at the HiSAM Gallery Shop x Mori a few years ago, it felt to me both inviting and overwhelming. That exhibit helped Hess figure out how she could do this on a larger scale. The work has been physically demanding. She had to buy a grab bar to make it easier to reach some of the pieces without disturbing the others on the template. She has trouble seeing things close. But it’s like an extended meditation, particularly with all the numbering. There’s something about the tension, she says, between the desire to get it right and being bored out of her skull with all the repetition. “The best part of clay is working with clay. You get out of your head. I just let it take over and tell me what to make.” 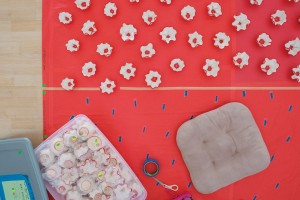 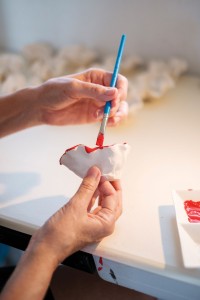 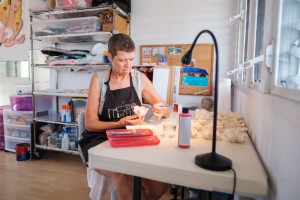 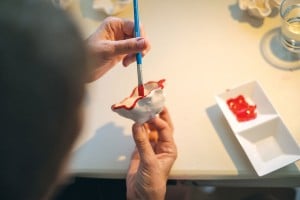 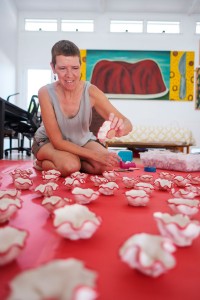 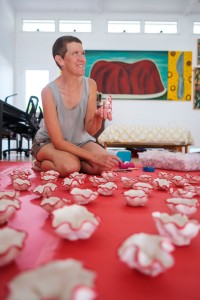 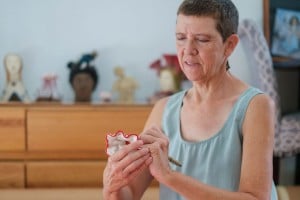 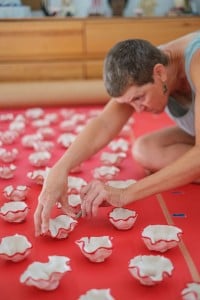 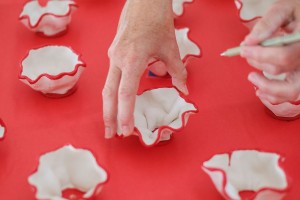 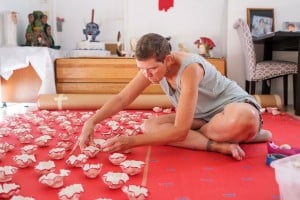 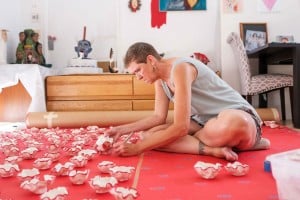