A group advocating for the houseless, Ka Po‘e o Kaka‘ako, shows what it’s like to live on the streets.

John Mantanona, one of the leaders of Ka Po‘e O Kaka‘ako, in the mock shelter he built at Spalding House as a test run in late July. Photo: Aaron K. Yoshino

The curators of Artists of Hawai‘i Now wanted works that explore the issues of our time. Noe Tanigawa, best known as an award-winning journalist but also a painter, took the opportunity to shine a light on something she’s passionately covered for Hawai‘i Public Radio: the houseless community in Kaka‘ako.

Tanigawa “wanted us to share what it was like for us living on the street,” says Aura Reyes, one of the leaders of Ka Po‘e O Kaka‘ako, or The People of Kaka‘ako, which is also the name of the piece. She never planned to be a leader, but it’s a role that suits her. She and her family lost their home about 10 years ago when their rent increased and they couldn’t pay on time. They applied for emergency housing, then lived on the street for a few years before settling in Kaka‘ako. She didn’t get involved as an advocate until a group called Hui Aloha came to the area a few years ago and suggested that houseless people there form a community. 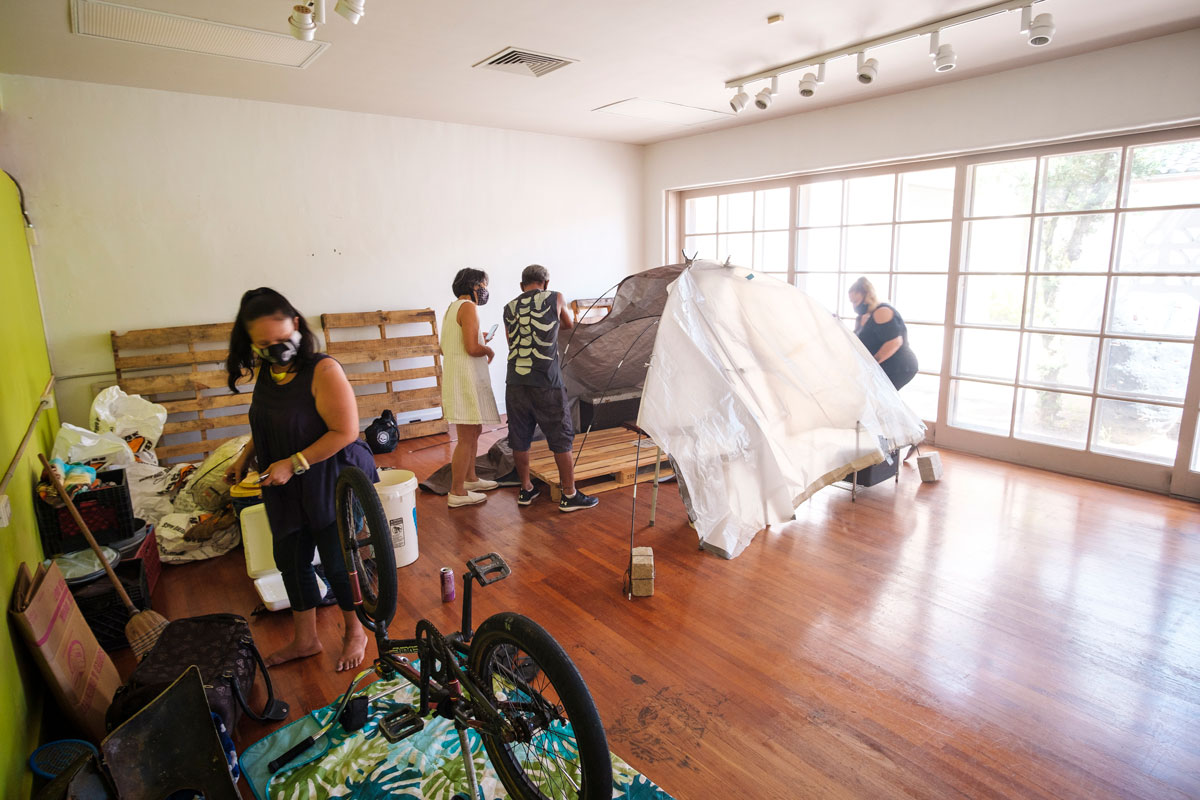 From left, Aura Reyes, Noe Tanigawa, John Mantanona and Raquel Pupuhi set up this installation at Spalding House as a test run to see how much space it would take up in the gallery. Photo: Aaron K. Yoshino

“We’ve always thought of ourselves as a community,” Reyes says. But once officially formed as Ka Po‘e o Kaka‘ako, they started hosting weekly cleanups, attending neighborhood board meetings and forming relationships with the surrounding property owners. They also organized a service fair in September 2019, bringing together providers to assist with everything from haircuts to drug treatment referrals to case management and medical services.

A month later, the City and County of Honolulu took over jurisdiction of the area from the Hawai‘i Community Development Authority and did a sweep. “I knew something had to change,” Reyes says. “It’s so hard to keep the community together when we’re not together.” 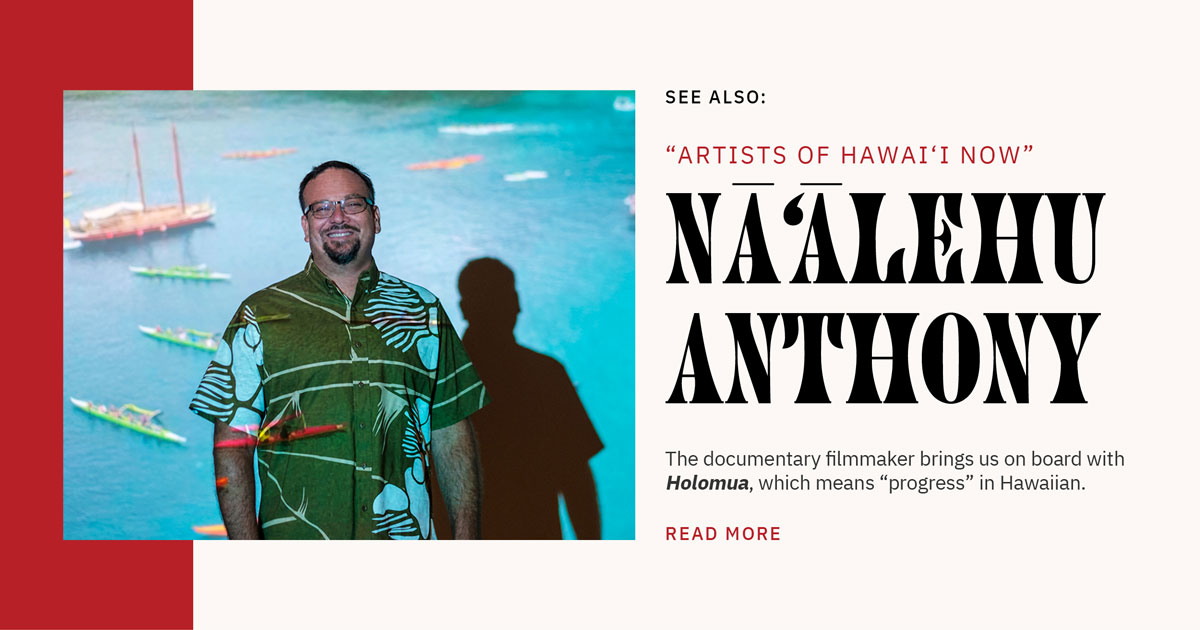 One of the other leaders, John Mantanona, also lived on the streets of Kaka‘ako for many years after he could no longer afford the rent on his Waikīkī apartment. He’s testified against bills that targeted houseless people while helping those around him by providing supplies and using his skills as a cook to serve omelets at an Easter brunch held at Kaka‘ako Mauka Gateway Park. For the Artists of Hawai‘i Now exhibit, he built a mock shelter that represents the home of “someone who has been around awhile,” Reyes says, with pallets and bedding on one side, shelves, canned goods, water jugs, a solar panel, tea kettle and more on the other. As visitors explore the shelter, they can scan QR codes that open stories from the houseless community through audio and video clips. The codes will also appear in Kaka‘ako near Ilalo Street so people can trigger the stories on-site. And Reyes, who was finally granted emergency housing after almost eight years, worked on a painting to display on the wall near the shelter, showing the struggles against injustice as well as a connection to community.

“We’ve always thought of ourselves as a community.”

The curators want this exhibition to show ways to navigate forward. For Ka Po‘e o Kaka‘ako, that’s already happening. The group is working with the city and state to secure land near Middle Street, where its members will be able to build a village compound of sorts for their community. Shared facilities for cooking, restrooms and more will be part of the Kauhale Initiative with the lieutenant governor’s office and other community partners. 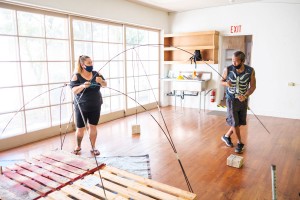 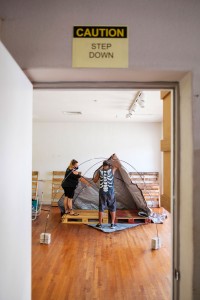 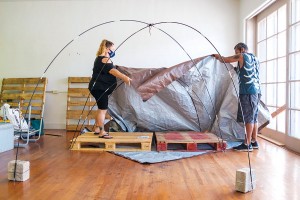 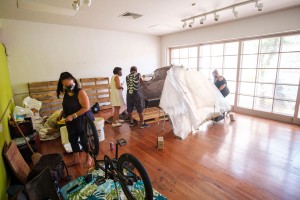 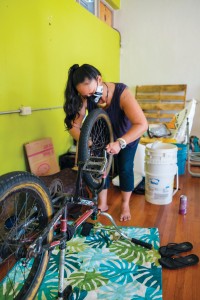 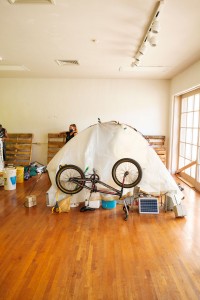 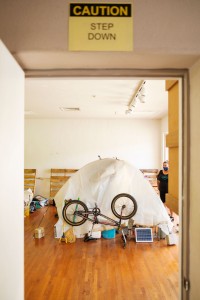 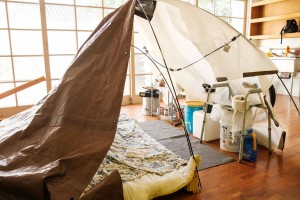 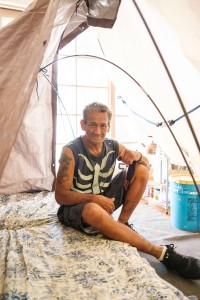 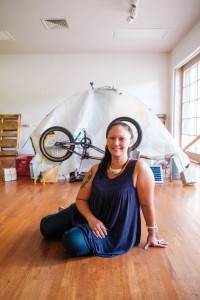