The documentary filmmaker brings us on board with Holomua, which means “progress” in Hawaiian.

Nā‘ālehu Anthony tests his favorite shots on screen at the museum’s Doris Duke Theatre to see what will work best in the final cut, which will be projected onto the gallery floor. Photo: Aaron K. Yoshino

Nāʻālehu Anthony is a storyteller. Whether through his past role as CEO of ʻŌiwi TV, his production company Palikū Documentary Films or as media specialist for the Polynesian Voyaging Society, he has spent decades advocating for the Hawaiian culture through stories, and now he gets to share them in a new way.

“I’m really stoked to be part of this process,” he says of Artists of Hawai‘i Now. He’s been with PVS since 1995 and directed the communications team documenting Hōkūleʻa’s Mālama Honua Worldwide Voyage from 2013 to 2017, at times sailing on the canoe. Much of his work tries to answer the question, “How do you bring people on board?” For his piece in the exhibit, he’s bringing the boat to us.

Only a dozen or so people sail on the Hōkūleʻa at a time, Anthony says, but it’s a transformational experience to discover the brilliance of the ancestors. “So what we have to do is bring a life-size canoe into this space.” He does it through video projections. Footage filmed on multiple legs of the worldwide voyage are projected onto the floor, allowing visitors to feel as if they are standing on the deck.

Midway through the process in 2020, as much of life as we knew it changed, he found himself asking, “Does this material even matter?” But then he saw the similarities between the pandemic and a canoe voyage, where you see the same people every day and aren’t sure when you’ll reach your destination. He decided to cut back on additional filming and lean more into the theme of solitude. 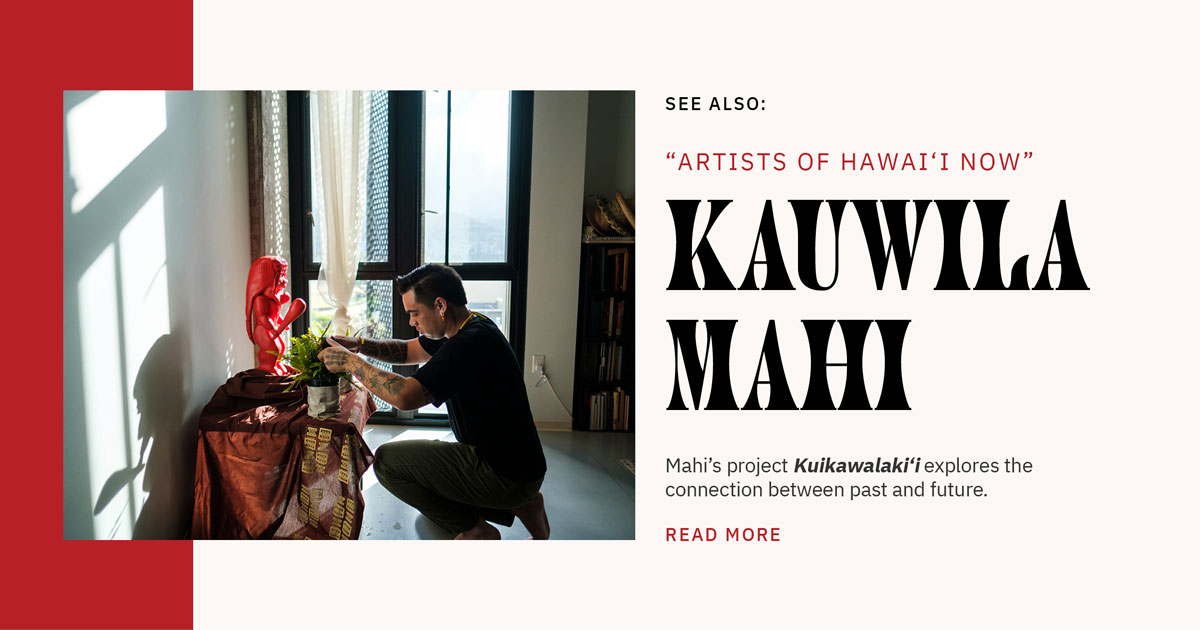 “In the filmmaking world, you can shoot a feature in 40 days. We shot 1,000 days,” he says. From that, Anthony had to choose his favorite 100 days—still a wealth of footage—and narrow it down from there.

It’s not just selecting his best memories. He had to bring his favorite shots for a screen test at the museum’s Doris Duke Theatre to see what options would work best in the final cut. Some are too short, too fast, too shaky. “I don’t want anyone to throw up in your gallery,” he says to curators Taylour Chang and Marlene Siu.

In the test, the film is projected on a traditional screen. So, for the full effect, everyone takes turns lying on the stage with their feet toward it to see what it would be like to stand at the edge of the projection the way people will as they enter the space. As the boat rocks over gentle waves, heading toward the sunrise, a sense of calm comes over the almost-empty theater. Shots like this—long, wide and slow, where you can’t see land, with one exception (Honolua Bay on Maui, where Hōkūleʻa’s first voyage began in 1976)—comprise the 12-minute project that loops throughout the day.

“How do you bring people on board?”

“I had to pull stuff from the first test that wouldn’t work,” Anthony says, like shots of the crew fishing. There are just a few suggestions for the sequence and transitions to make it more meditative, but it’s pretty much ready to go.

“I consider myself really lucky to have been chosen. There are so many ways to engage the canoe story,” he says. “This is a continuation of that.” 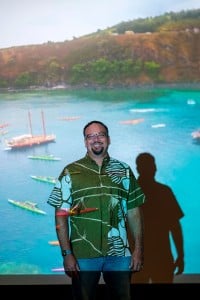 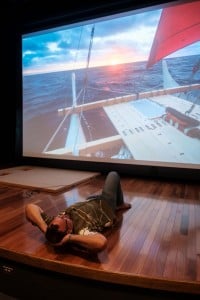 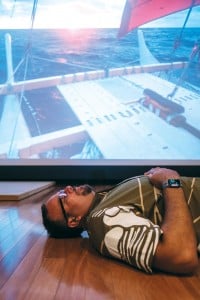 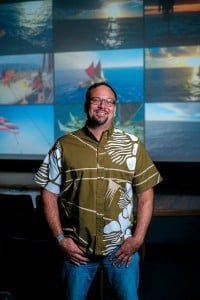