Mahi’s project, Kūikawalaki‘i, explores the connection between past and future.

Editor’s note: The spellings of Hawaiian names in this legend were taken from the book Ruling Chiefs of Hawaiʻi, as suggested by Mahi.

Artist isn’t the first thing listed on Kauwila Mahi’s résumé. If you Google him, you’ll find him described as an Indigenous scholar, an ʻōlelo rapper, a cultural adviser, a video game designer. Yet it’s his artwork at the center of one of the galleries housing Artists of Hawai‘i Now.

It’s a modest piece: a 2-foot-tall 3D-printed vermilion kiʻi, or statue, holding a club. “Most of the time kiʻi don’t have weapons or hold anything,” Mahi says. “I thought that was kind of an interesting image to take on.” Though small, it represents something much bigger: Ka-wala-kiʻi, according to legend, a massive warrior who intimidated Kiha-a-Piʻilani’s forces as they sailed from Hawaiʻi Island to Maui to challenge brother Lono-a-Piʻilani for the right to rule Maui. But once Kiha-a-Pi‘ilani and his men arrive, the warrior Piʻi-mai-waʻa strikes Ka-wala-kiʻi, and he realizes “it’s just an image of a person, an image of a system, really, and an image of a warrior. And then he throws it off the cliff, and that changes the course of the war completely. After the kiʻi is broken and defeated, then and only then is Maui Kiha-a-Piʻilani’s to rule.” 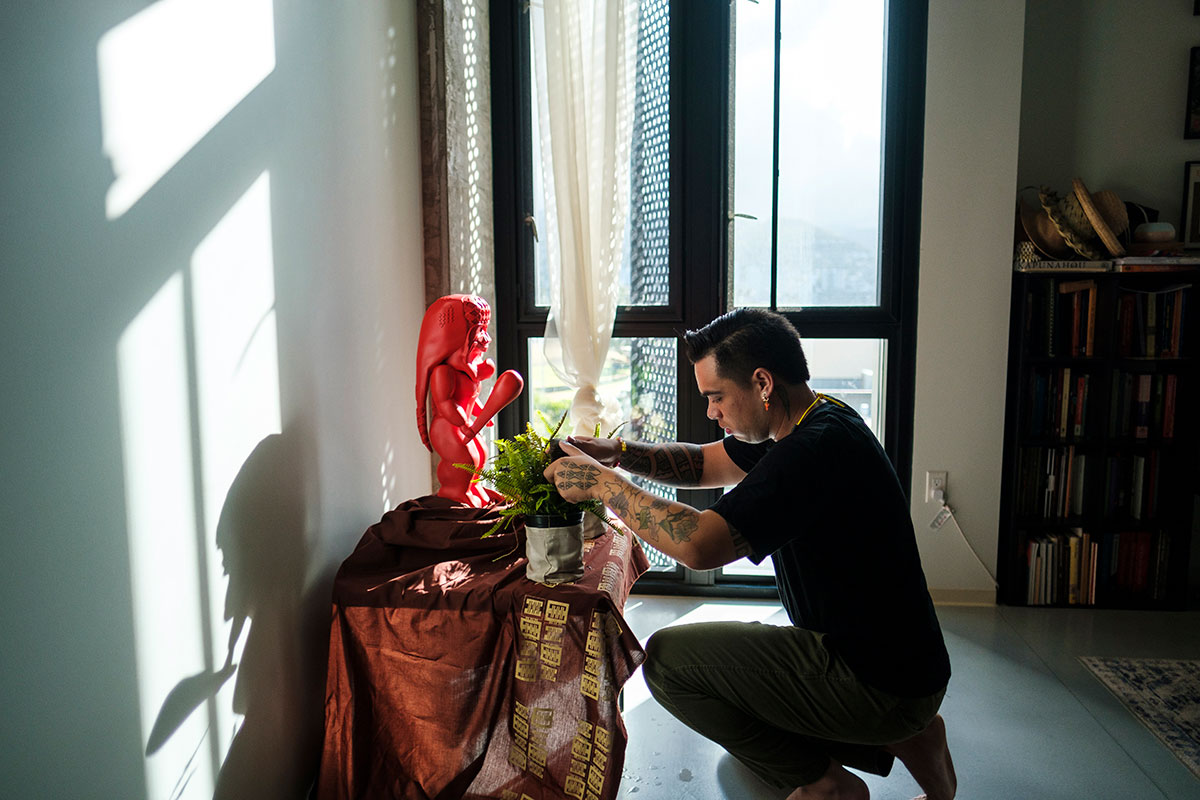 Kauwila Mahi performs an ‘awa ceremony with his piece, “to activate change and to bring the akua into this realm for the season,” he says. Photo: Aaron K. Yoshino

Mahi’s original plan was to print a towering 8-foot kiʻi for the exhibition. He wanted to incorporate traditional design elements as well as contemporary street style—to “let the culture I’m in influence the culture I’m rooted in,” using the popular Bearbrick toy as inspiration. Unfortunately, one of the pieces of the 8-foot version broke just before installation and he had to scramble to re-create it on a smaller scale. “Whatever the kūpuna wanted to happen is gonna happen,” he says with a laugh, “so I have to go with it. It’s not up to me at that point.” But even the 2-foot version lures you into the more intriguing part of the work: an augmented-reality video game he designed. It’s the first mobile application game the museum has ever featured and one of many works this year that venture beyond traditional media. 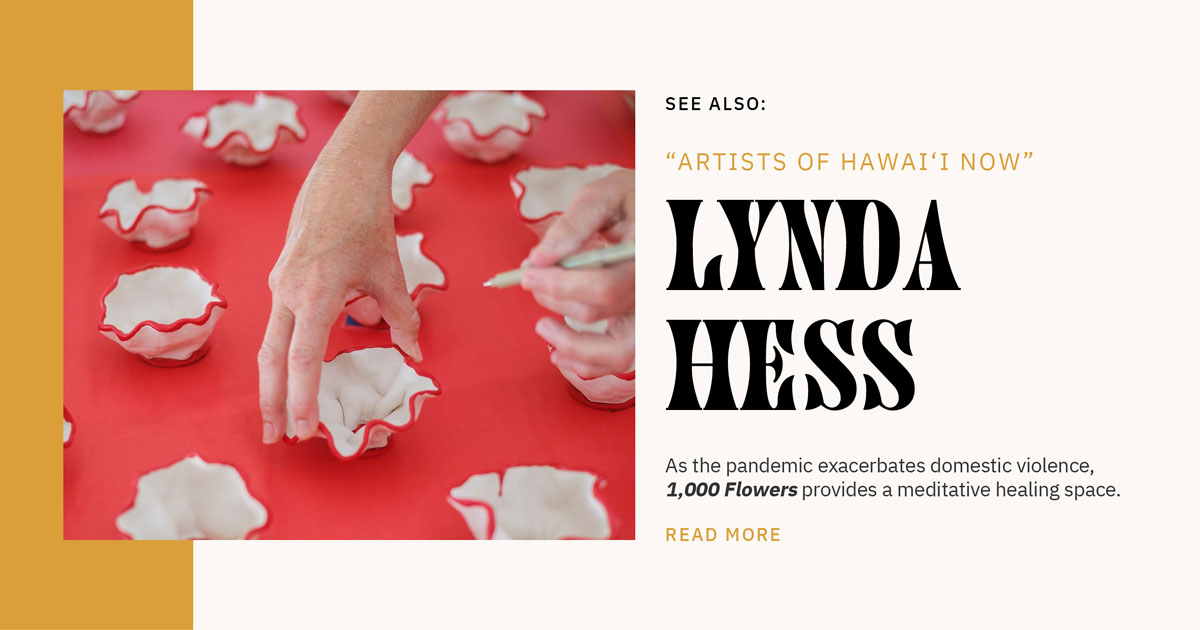 “As an artist what I try to focus on is plasticity,” Mahi says, both in the sense of how things change over time as well as literally printing in plastic for this project. “All my art is rooted around moʻolelo and trying to figure out, how does this story work without it just being something on a piece of paper, and trying to bring the story to life.” Moʻolelo can change with time and “always be useful to us.” This particular story of Ka-wala-kiʻi was only printed in Hawaiian-language newspapers a few times, including after the smallpox epidemic in 1853 and after the overthrow in 1893. “I believe that the purpose of that is to give us a guide into the tumultuous times that were happening and a way to contextualize it, or perhaps even dismantle the oppressive system through stories, or weaponize our stories against that system. That’s what my project is really about,” Mahi says. “Our ancestors made space for us to create a different future, and so when we know their stories intimately, we can create the future that they wanted too, and create our own.”

“My hope is that people understand the versatility of mo‘olelo.”

Visitors to the gallery can scan a QR code with their phones to download the game and play in the area around the statue. Mahi started by building five levels of play, but when the pandemic delayed the exhibit a year, he added two more. “Having more time and more space kind of forced me to process the story more,” he says, with “more pressure to look at everything surrounding the story in ways I didn’t have the capacity to in just one year.” You beat each of the seven levels, some of which take place in the future, by defeating the kiʻi. The number seven is significant to the Kumulipo, whose first seven sections occur in darkness. “Once you hit the seven, then you know you can make change in the world.” 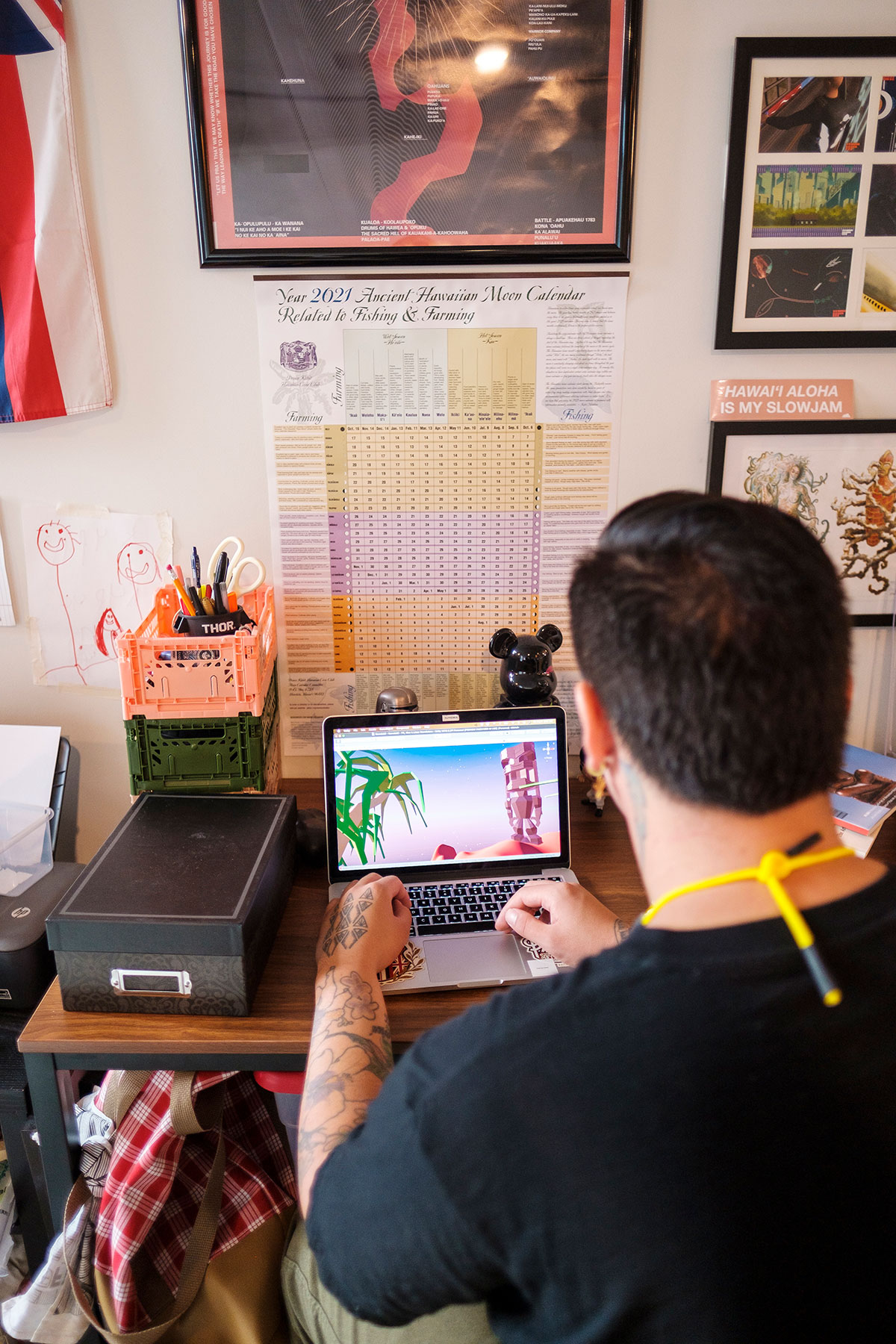 Kauwila Mahi has been designing video games in Hawaiian for about five years. “All my art is rooted around mo‘olelo and trying to figure out, how does this story work without it just being something on a piece of paper, and trying to bring the story to life.” Photo: Aaron K. Yoshino

Destruction and creation. The theme runs through Mahi’s source material as much as his final project. When printing the kiʻi, “it’s lightning that melts the plastic. In Hawaiian ceremony, when you consecrate a heiau or when you put mana into a kiʻi, the process is called”—wait for it—“kauwila, which is also like a lightning,” he says. “It’s a cool connection, that even in this modern process, the traditional elements came out anyway.” 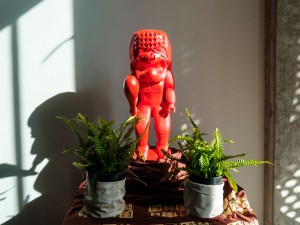 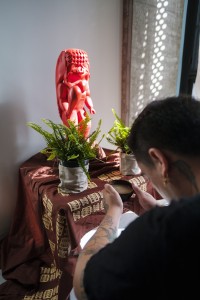 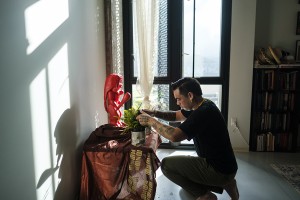 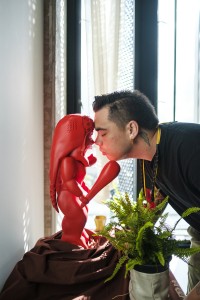 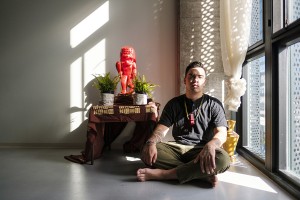 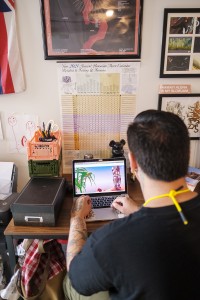 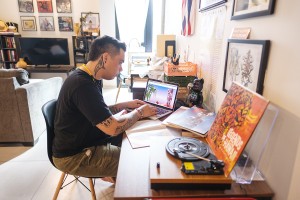 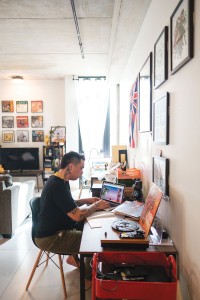