Chickens are everywhere on the Garden Isle: smoked, in adobo, karaage-style or as puffy chicken skin crisps.

I was working on my laptop at my mom’s house in Hanapēpē when I saw a guy slinking around the yard. He was half-crouched, looking down the side of the house. “Hullo?” He called. I walked out there and saw that he had a kid with him. “My chicken,” he began. “My chicken ran away. Might be in your back yard.”

“OK. We go.” I led him across the patio to the back, where indeed a large rooster stood on the zoysia grass. It was the Jason Momoa of chickens. It took a step forward, then dashed. The man darted after it, enlisting his son and myself to triangulate the bird. We chased it around the shed and under the hibiscus bushes along the chain link fence.

When we captured it, my shirt had been torn. The man cradled the chicken as it sat wide-eyed in the crook of his arm.

Kaua‘i is known for its wild chickens, thanks to two hurricanes that scattered backyard flocks and a lack of mongoose predators. We have shirts stating this fact. You’ll see chickens in parking lots and outside post offices, pharmacies, restaurants and supermarkets, darting and ducking under moving cars, their bird brains unburdened by concerns like butchery. A friendly hen and her chicks will walk up to you looking for food. “You’re among the lucky ones,” you say as you feed them whatever you’re snacking on. They peck at the dirt at your feet. All around, the neighborhood changes, yet the chickens remain the same. Time flies, and if you chase them, so do they.

Here are six places to get (not wild) chicken on the south side of Kaua‘i. There are more than six, of course. But these are within striking distance of my mom’s house.

Chicken in a Barrel 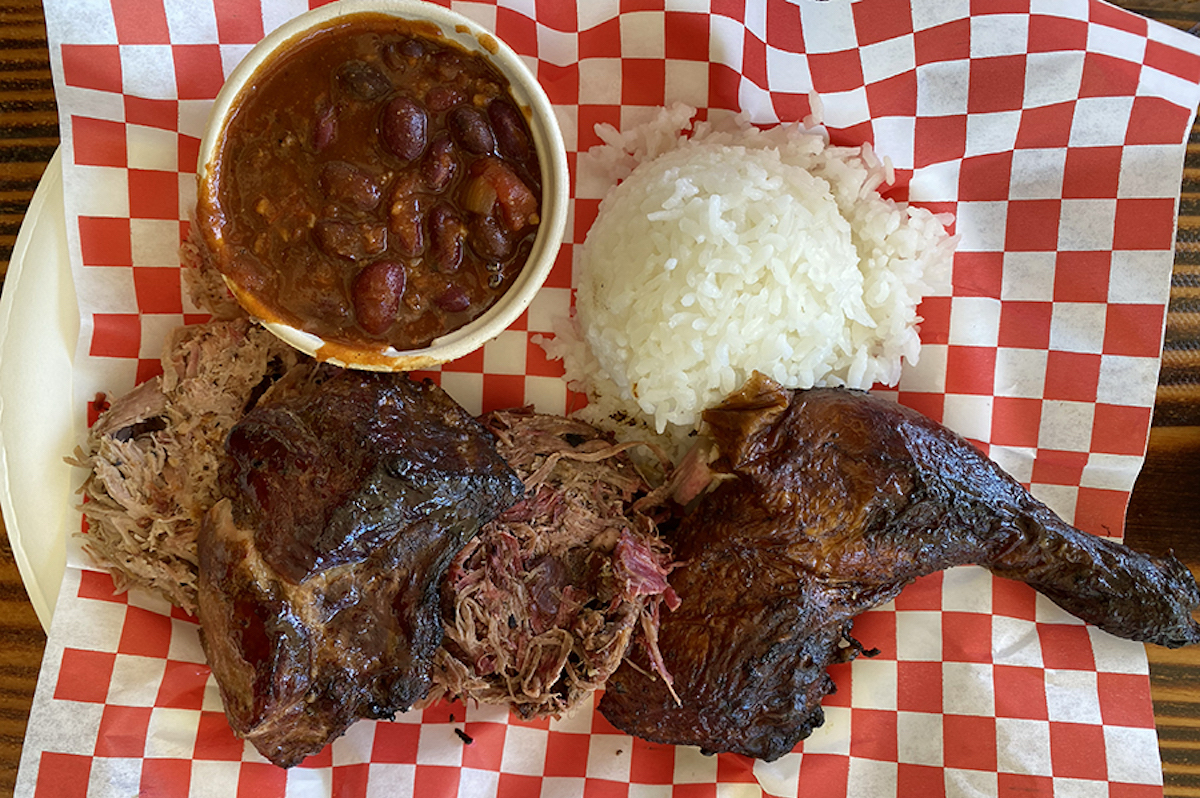 As its name implies, the chicken here is smoked in custom-made barrels that are visible right when you pull up to this large, airy plantation house. An anachronistic wall of self-serve beer taps greets you up front. The barrels of chicken, beef and pork over coal and kiawe wood smolder while coconut trees, plantation cottages and dark, black sand shoreline take you back to simpler times. Until you hear your name called over the loudspeaker. Order’s ready. The Chicken in a Barrel plate ($15.10) is served with house-made chili and rice and you can stack up sides like mac salad, cornbread, fries or onion rings. Tender, smoked goodness.

Recommended chicken-dish-to-beer ratio: One plate of chicken to one IPA. 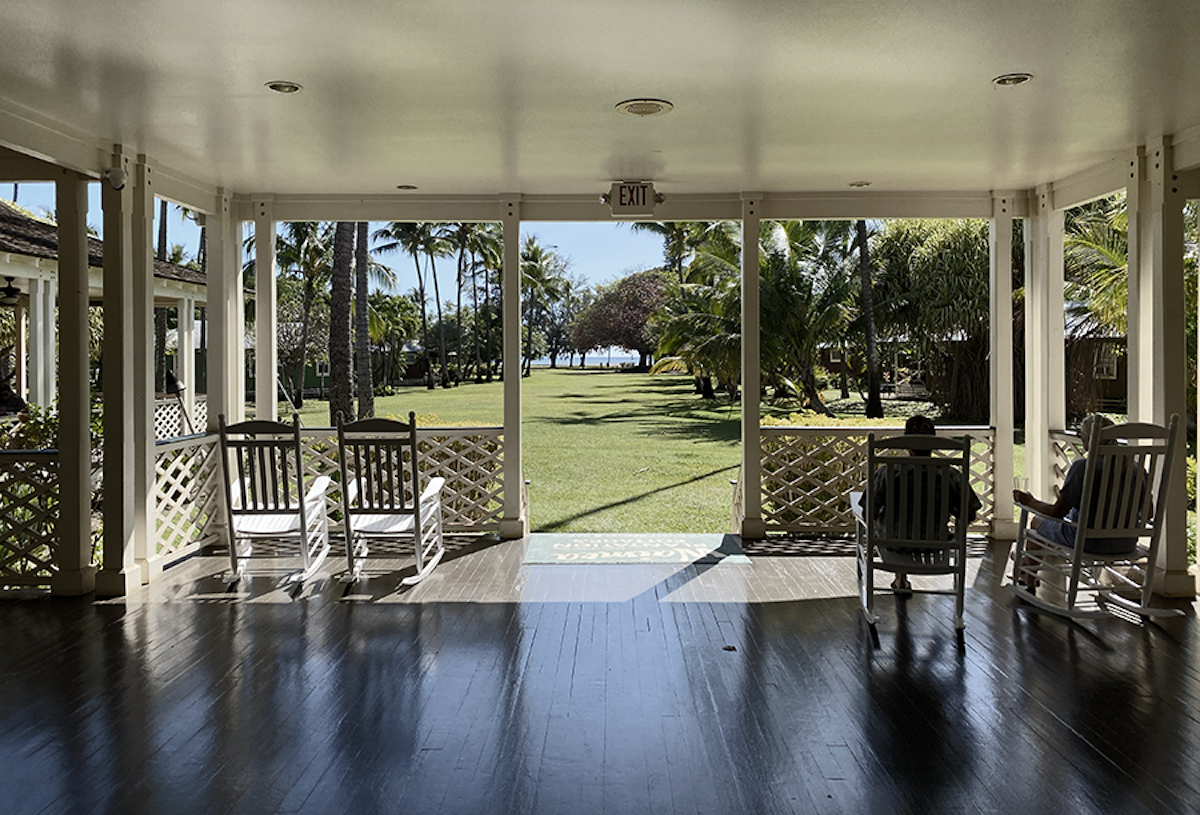 Back in high school, I’d spend the weekends helping my uncle, a carpenter. I spent hours laying down roofing shingles, cutting lumber and pounding nails wherever he instructed me to. For lunch, we’d go to the nearby Omoide Bakery and Delicatessen and order the oyster chicken. On a recent trip back, I heard the ownership had changed and I wanted to see if the recipe was still the same. I ordered the a la carte regular-sized serving of oyster chicken, and watched the server load the clamshell plate with enough for a potluck. “Whoa, whoa!” I threw my hands up. “Too much?” She laughed. “You want the small?” I nodded and she proceeded to load up a smaller Styrofoam plate. “Whoa, whoa!” I said again. The tender, bone-in chicken was chopped up Chinese-style and tossed in sweet, savory caramelized darkness. It was just as I remembered it.

Recommended chicken-per-person ratio: 1 small portion per 2 people (with your own rice and sides) and then throw the leftovers in a soup with carrots, onions and potatoes for another meal. 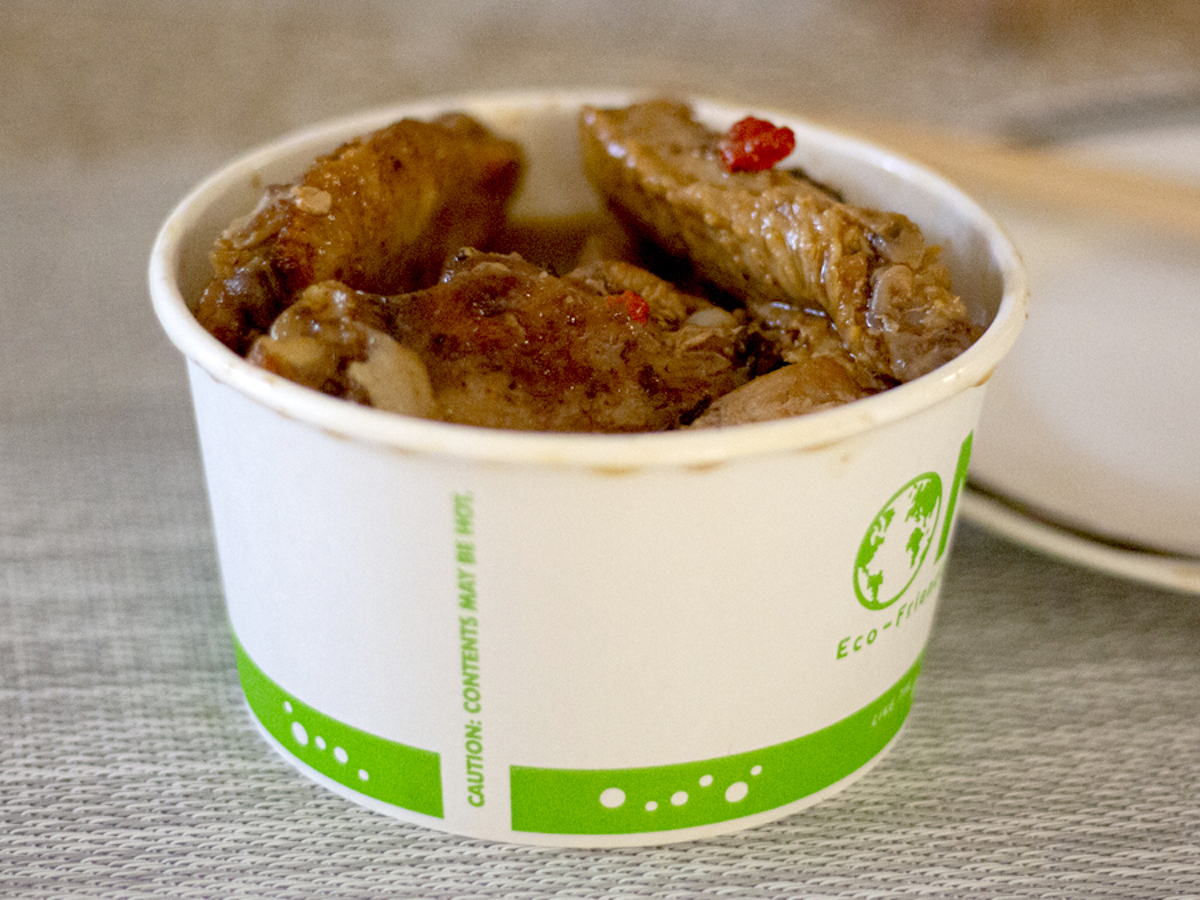 On the outskirts of Hanapēpē town, away from the galleries, boutiques and bakeries, on the other side of a single-lane bridge near a series of condemned buildings, is this Filipino joint that I had never noticed. The fact that it’s been in business for over a decade, tucked out of sight and with minimal signage, says something. The chicken adobo ($8 for an a la carte medium portion) is served swimming and sopping in its own fatty braising sauce. The wings are fall-apart tender with skin that slides right off with very little coaxing. Bright and acidic, with vinegar, soy, garlic and cumin. 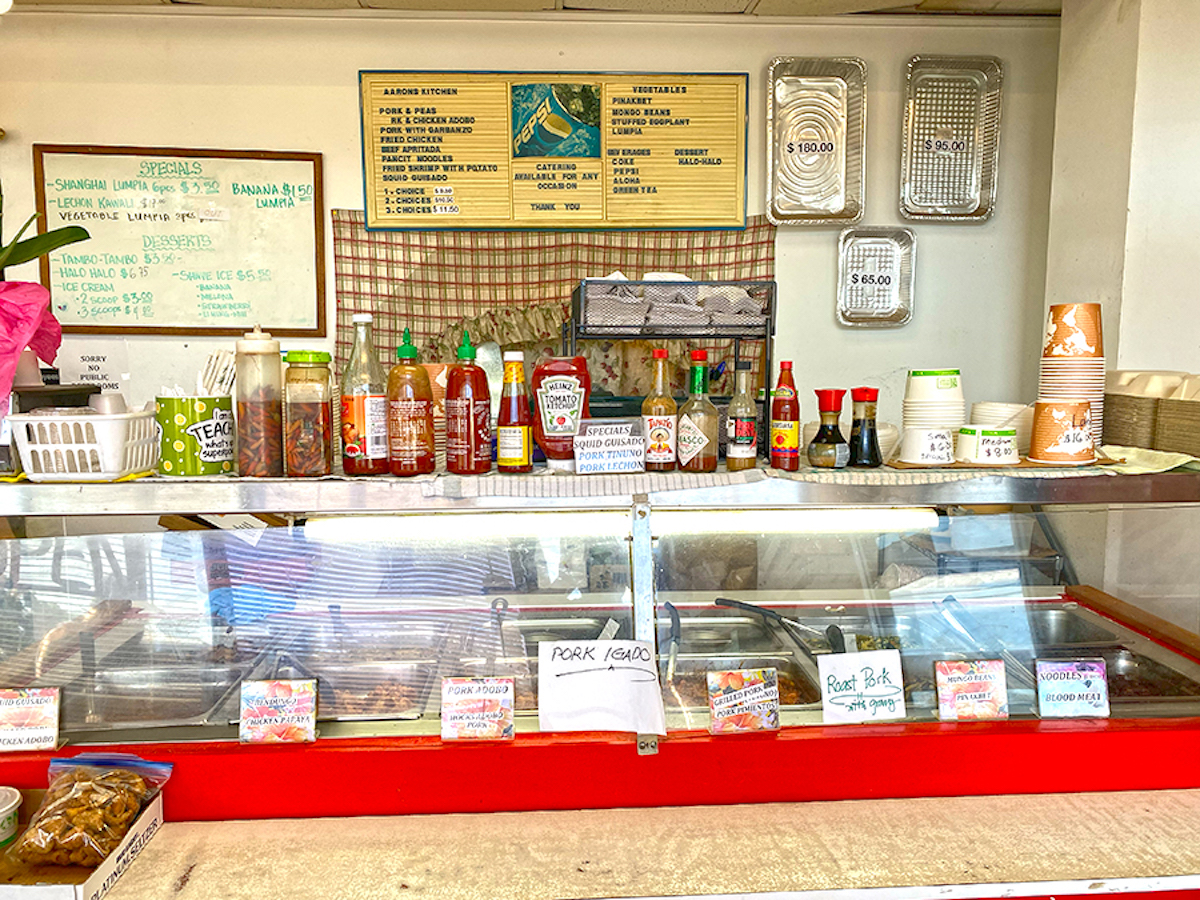 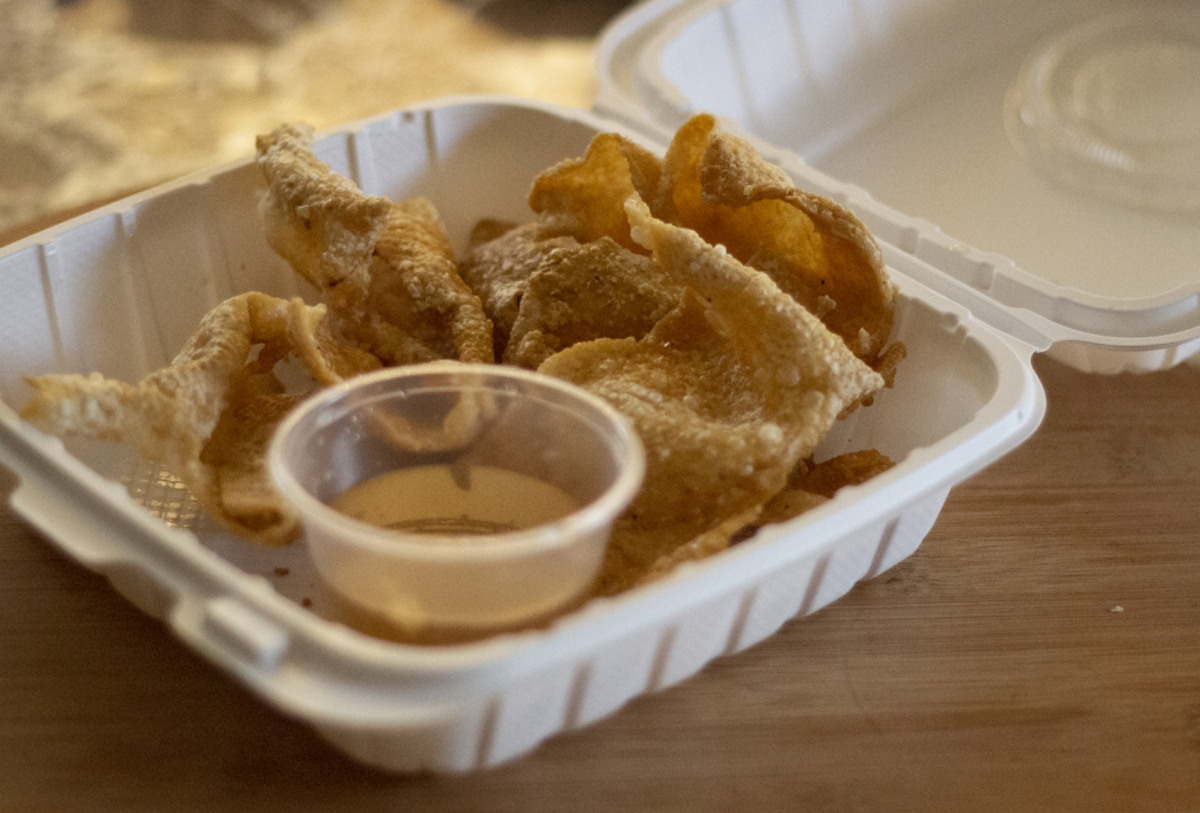 A counterpoint to Aaron’s Kitchen’s soft, braised skin is the chicken chicharron ($6.25) from this nice little restaurant in Hanapēpē right across from Omoide Bakery and Delicatessen. The chicken skins are scraped of meat and fat, dried and fried into light, puffed crisps. They’re minimally seasoned but come with a side of chile pepper vinegar for heat and acid, and you can add on other sauces like pulehu or liliko‘i. Not as greasy as anticipated, and very addicting.

Recommended chicken-to-napkin ratio: 7 pieces to .5 napkins, or one side of your shirt sleeve. 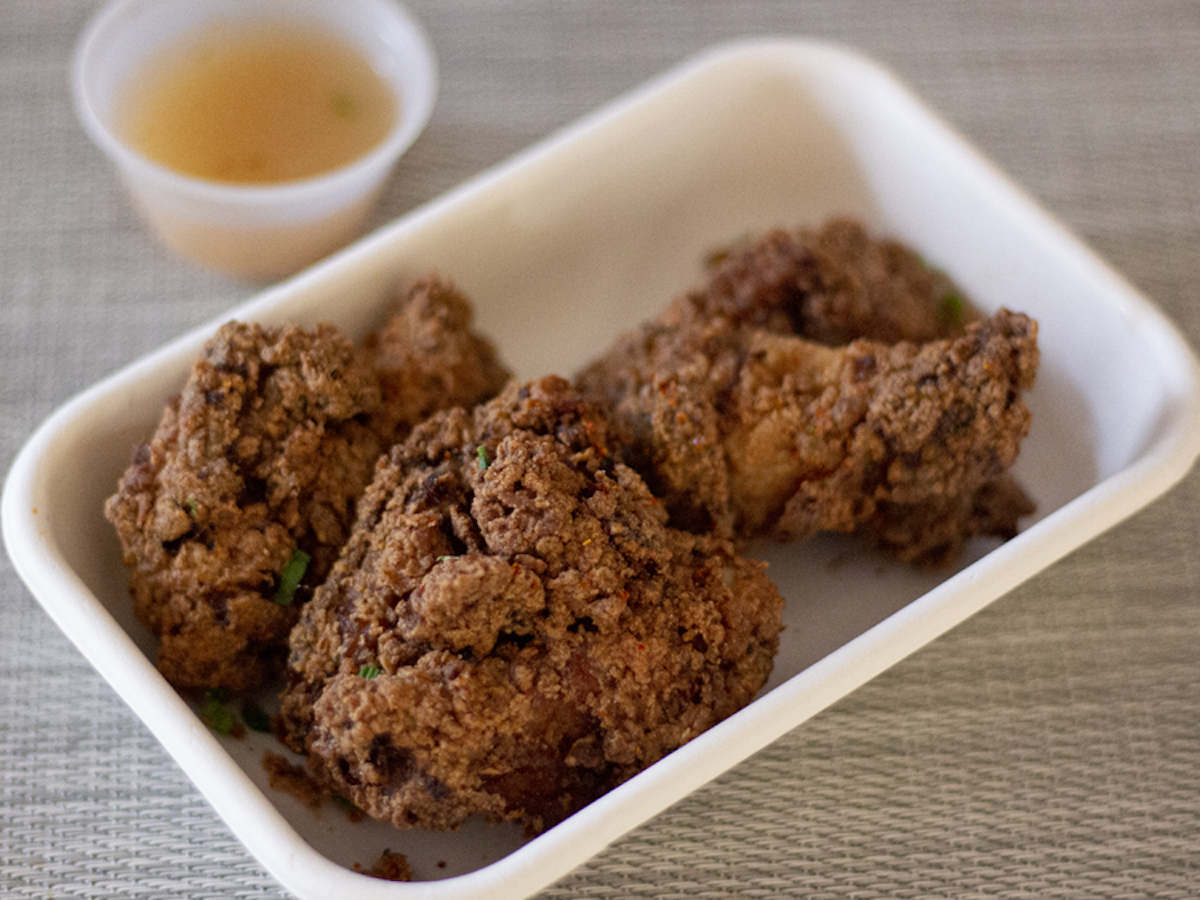 A pandemic closure and rebirth in the old Matsuura Building in Lawai. A Punky Aloha mural greets you when you walk in. This is one of the more modern establishments specializing in kiawe grilled and smoked items. Dad’s Fried Chicken ($11) is an outlier, karaage-style wings marinated with ginger, seasoned with togarashi and dredged in potato starch and fried up to a fluffy crisp. It comes with a side of chile pepper water, and although the kick is nice, it overpowers the mild sweetness of the chicken if that’s what you’re more into. Delicious both ways.

Recommended chicken-to-napkin ratio: 1 wing per napkin (this says more about me and may not apply to other eaters). 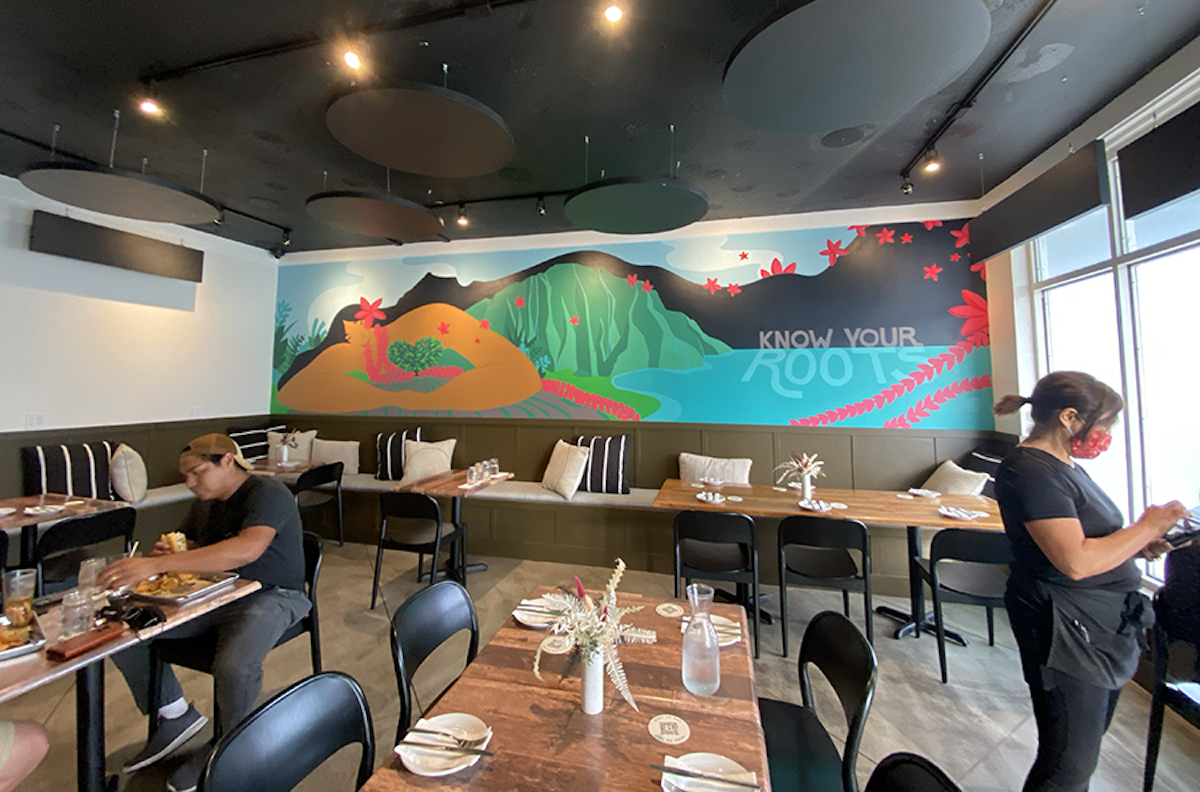 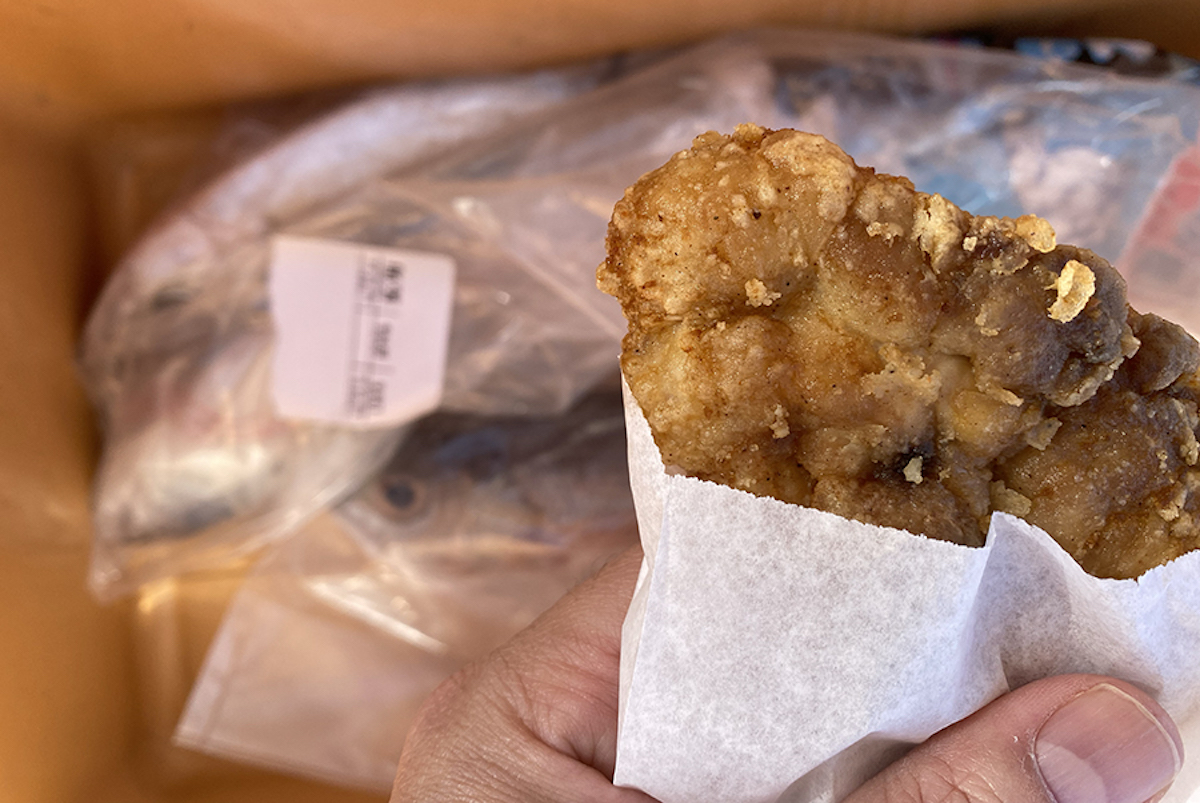 You used to be able to find a variety of fresh whole fish at any grocery store, but now it’s a rarity. The only place I know of that sells whole fish caught by locals is Lawai‘a Fish Co. in Lihue. You’d better call ahead or show up at 6:30 a.m. It beats driving around the neighborhood looking for hand-painted “Akule for sale” signs. There’s also an assortment of poke and a hot bar. The garlic fried chicken ($2 apiece) is a pure impulse buy. You walk up to the counter with a pound of fresh ‘ahi, a whole ehu or some moi, and side-eye the glistening fried chicken pieces sitting in the warmer as the cashier rings you up. At the last minute you say, with unexpected urgency, “And one of those.” They give it to you in a small white paper bag and you steer one-handed on the way home, taking bites at traffic stops. Happens every time.