Once a sleepy burger stop for surfers, Monsarrat Avenue has transformed over 19 years into a food and fashion scene noted for outdoorsy authenticity. 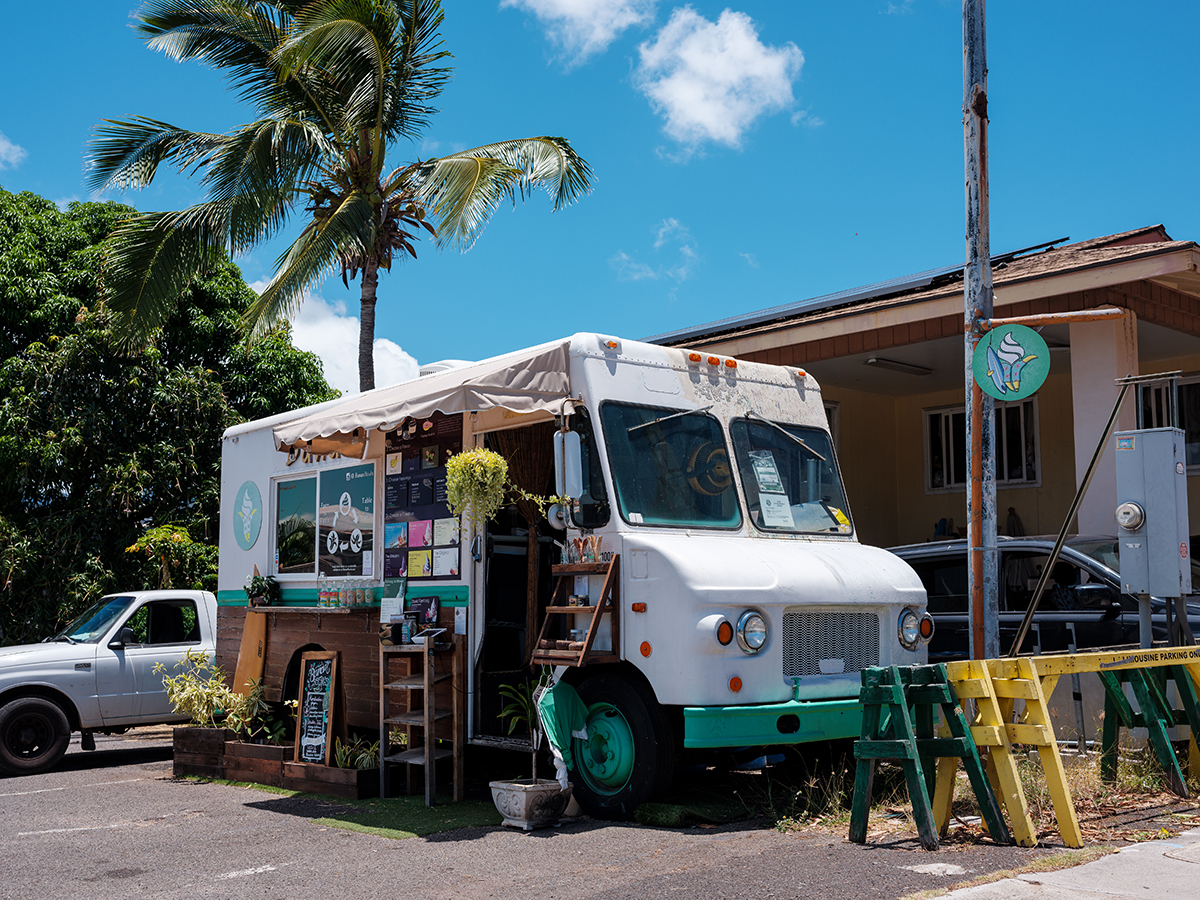 From the beach at Waikīkī, Monsarrat Avenue runs uphill to Trousseau Street, where it turns into Diamond Head Road. It’s a stretch of mostly humble houses, with lovingly tended flowers and mango, papaya and banana trees, and a tiny commercial strip.

“We have our own restaurant row, with every culture around,” says Bruce Bryant, who took over 3-year-old South Shore Grill (“Hawai‘i’s best fish tacos,” he adds) in 2007 and rode out a recession to find success. Compared to Waikīkī and even Kapahulu, it’s “much more about family, an outdoor lifestyle. Up and down the street people are going to the beach, park, hiking, jogging, walking babies and pets.” Monsarrat’s proximity to Kapi‘olani Community College and its Saturday morning farmers market assures daily traffic. That the street provides pumping cardio for walkers, runners and bicyclists is gravy. “Lots of people grab our sandwiches, baked goods and prepared meals for a picnic at Kapi‘olani Park or the beach,” says Kelvin Ro, chef and owner of bustling Diamond Head Grill and its adjacent Diamond Head Market.

SEE ALSO: The Original Magoo’s Pizza Is Back in Business After a Long Hiatus Ethan Won pulls a city garbage bin to the curb. “I’ve lived here all my life,” says the Hawaiian Electric Co. employee, 53. He barely remembers going for cones at Dairy Queen, patronized Burgerland and Sun-Ray Market faithfully back in the day, and knew the Ho family that owned and lived above Mac’s Market, an innovative gourmet wine and food shop in the ’70s and ’80s. (Its upstairs later hosted The Bistro, famous for French onion soup, escargot and its late-night after-Waikīkī Shell scene; a later iteration, Les Escargot, replaced it.) Won closely follows the jinxed corner property at the corner of Kana‘ina Avenue. “Korean Barbecue lasted the longest, we all went to that”—also back in the ’70 and ’80s—“then there was one that closed, then Happy Valley Pasta & Pizza, that closed too, and now Café Morey’s.” An açaí and banana swirl papaya boat at Banán.

Won’s wife and mother-in-law, who lives with them, will go next-door to Morey’s: “My kids like the chicken strips.” Won’s family also likes Banán for its dairy-free soft serve and Diamond Head Grill for plate lunches. They get their hair cut at Paul’s Barbershop around the corner (as a child, says Won, “I went to Oide’s Barbershop,” its predecessor). Next door to Paul’s hangs the oldest sign on the avenue, for Service Grocery, now closed. For decades a couple of aunties sat inside making lei and bouquets. Won’s eldest son, Haven, just back from his first year at Princeton, headed straight to Hawai‘i Sushi across the street when he got back home.

SEE ALSO: An Extrovert’s Guide to Dining Solo in Honolulu Anchor of the Avenue

During the 1990s, places had closed or declined as owners aged. “The street felt sleepy when I arrived,” says Maria Barnette, who took over Bogart’s Café in 2000 and sparked the avenue’s revival.

“For some reason when I turned 40 I wanted to do something different,” she says. “I was reading cooking magazines and watching the Food Network and thought, ‘I can do this.’ My friends said I was crazy—and they were right.”

The first owner had struggled for 16 months when Barnette took over. “Maria started this with a maxed-out credit card,” says her husband, Michael (they weren’t married at the time). “She twisted the arm of Larry Ishii at American Savings Bank into giving her a $100,000 loan.”

Barnette and her mother, then 73, expanded the food offerings. Then came a tiny article in HONOLULU: “After you guys awarded me Best Breakfast Bagel that put us on the map.” The famous bagel sandwich—“melted cheese, eggs, spinach and tomato”—and omelets (particularly a crab one) also put Monsarrat on the map as a food destination, just as a hike up Diamond Head became a tourist must-do.

Twin brothers Anthony and Mark Apolencia started working at 13. “My calabash nephews, they would beat the eggs while I was cooking,” says Barnette. “They’d wash the dishes. One day I was busy in the front of the room and this omelet came out. I said, ‘What’s this?’ They became my twin chefs.”

The boys were on the Mainland a couple of years ago when Bogart’s moved from its cramped space in the center of the strip mall to the prime corner location. “I dragged the boys back,” says Barnette. “They’re doing everything now.”

Bogart’s success created spillover opportunities for Da Cove Health Bar & Café (2003) and Japanese-focused newcomer Sunny Days Café a couple of doors down. You can get an açaí bowl at all three places and your evening ‘awa at Da Cove. Paul Ta’s barbershop is the avenue’s longest-tenured current business. An immigrant from Vietnam, Ta and his wife (and high school sweetheart), Tracy, took over Oide’s Barbershop in 1997. Basic cuts are $13 for men, $16 for women, leaving customers plenty of change for lunch afterward. His loyal clientele runs from entire families to bearded hipsters, even a professional baseball player when he’s in town. “We give children their first haircut and their last haircut before they go off to college,” he says. (Haven Won was one.)

At 58, Ta has run 14 Honolulu Marathons. “I swim, bike, walk,” he says. “I like exercise and this area is good for that.” The three Ta sons are 37, 35 and 27 and college graduates; the Ta parents now own the building. And when Tracy Ta raises the blinds you get the best barbershop view in Hawai‘i: all of Diamond Head.

SEE ALSO: 5 Restaurants to Satisfy Your Craving for An Old-School Burger After graduating from Waipahu High, Kelvin Ro followed a food path and struck gold with Kāhala Moon, the Hale ‘Aina Best New Restaurant of 1994. When it closed in 1998 he began teaching culinary classes at KCC. One day, he says, “I came to Burgerland for lunch and stayed to help Mr. Tanaka with Burgerland and Sun-Ray Market.” The Tanakas were elderly, the hamburgers had lost their mojo and the store was in disrepair. Ro ended up taking over in 2001 and, after renovations and a major menu makeover, opened Diamond Head Grill in 2002, followed by adjacent Diamond Head Market.

“At the Grill,” he says, “everything is cooked to order. It’s a health concept: nothing sautéed, everything marinated and grilled.” From the start his upmarket plate lunches, which offered a then-shocking brown rice and green salad option, were a hit with old and new customers. Burgerland was doing 75 to 100 plate lunches a day when he first started pitching in. “Now we do 500 or more plates a day at the Grill, 700 on weekend days.”

But the Market is where Ro really shows his flair. Every spare inch is a display space, from both fresh prune mui and pickled mango li hing mui by the register to cold cases full of continuously replenished gourmet grab-and-go sandwiches, homemade microwavable meals, chopped salads and an array of gorgeous desserts, in single portion and complete cakes. “Everything we make is restaurant quality,” Ro says, from the soba noodle sushi rolls to the poached salmon with remoulade. Comfort foods like pork pastele stew and beefy cheese mac share space with liliko‘i cheesecake, key lime tart, pumpkin crunch tart, pies and butter mochi. Whole cakes fill cold cases, including a liliko‘i cream torte and Ro’s prize obsession, a $52 carrot cake that people drive across the island to buy. The market’s signature lemon crunch cake has to be special ordered; not so the blueberry cream cheese scone so popular that “it paid for the bakery expansion,” Ro says.

“Today we have 56 employees,” he adds, counting grill, market and bakery. Ro’s impact includes fundraising for the Culinary Institute of the Pacific’s own building across the street from KCC—helping raise $25 million for its 2017 opening. He just finished raising $10 million for a second phase (restaurant, auditorium, innovation labs and classrooms), which the state then matched with an additional $20 million. “I contributed a $1 million legacy gift myself,” he says, “so Diamond Head Market’s proceeds will be donated to the university for several years to come.”

Now he’s embarked on a new $15 million campaign to outfit the labs, operate and manage the institute, and landscape the building. Oh, and he’s also been a leader in planning a modern restaurant for the site of the historic Cannon Club on the slopes of Diamond Head. “We hope to make our community proud,” he says. One of three locations, Mary Bastien’s popular Open Space Yoga opened here in 2009. Business “really took off after my original location in Chinatown was voted a Best Of Honolulu,” she says. “We’re open-minded—aren’t affiliated with any one school—and we aren’t just about yoga. We offer workshops in Ayurveda, meditation, breathing, relaxation.” After feeding her soul, Bastien goes to Bogart’s and Diamond Head Grill. Pualani Hawai‘i (@pualanihawaii) serves up bikinis and beach/resortwear while surfer-skater chic James After Beach Club (@jamesabc) is more of a guy thing.

There’s always a space somewhere, even if you have to walk a couple of blocks.

Monsarrat Avenue has quietly become a local and visitor destination without losing its soul or affordable prices.

This story originally appeared as “Field Guide” in the August 2019 issue of HONOLULU Magazine. Get your copy at shop.honolulumagazine.com and subscribe to the print and digital editions now.

One of the Oldest Aquariums in the U.S., Waikīkī Aquarium Turns 117