So you’ve tried plate lunch, loco moco and shave ice. That was just the beginning—there’s so much more to Hawai‘i’s food scene.

Year in and year out, but especially now with the influx of visitors, I am asked by Hawai‘i expats about what new, trendy, tasty restaurants they should try.

And by “new,” they mean within the past three years, since many of our friends and relatives don’t get to visit all the time, right? In addition to hotspots like MW, Fête, Yakitori Ando (if you can get a seat), Istanbul, The Pig & The Lady, Senia and Café Miro, I have a list of places that I’ve been giving to my seasoned visitor friends.

Note: This list has been edited a lot to only include places where you realistically can get a seat. I have been calling for reservations at some favorites recently and am told that I can’t get in for at least a month! Hopefully as tourism and seating restrictions ease up, I can add to this list. 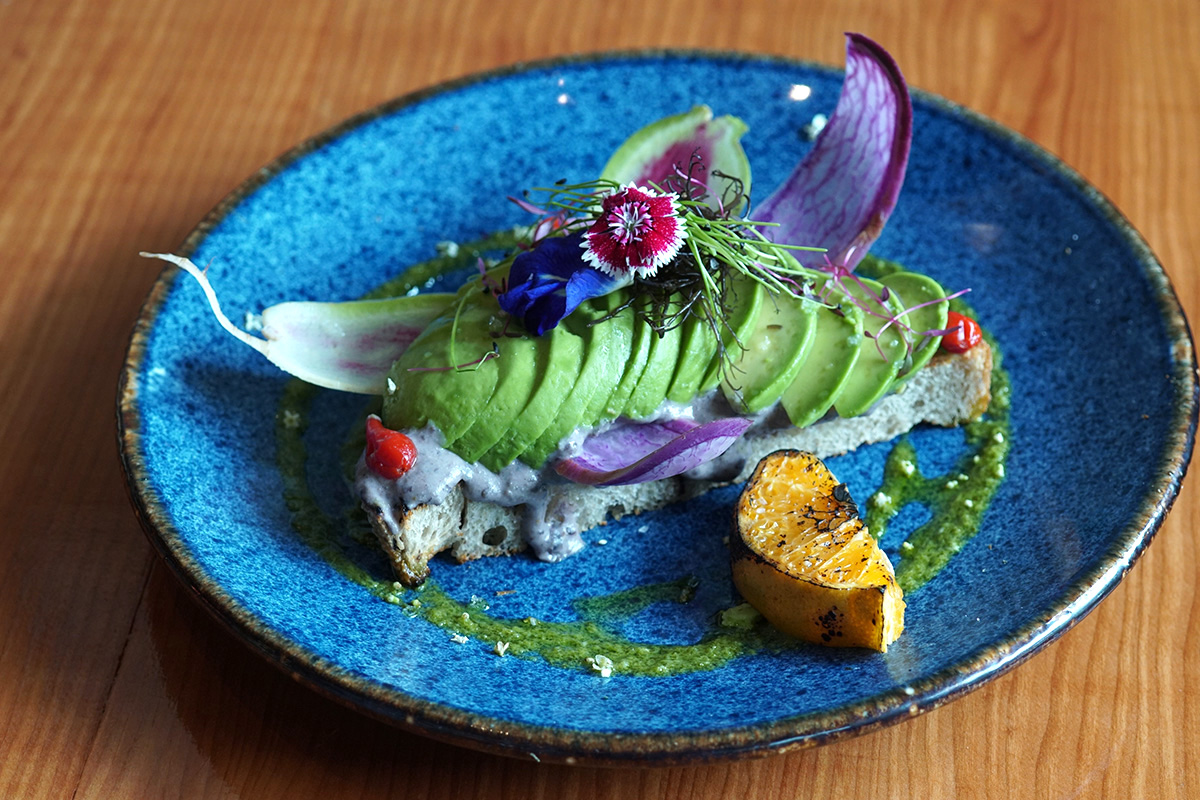 This place is super brand new and I absolutely love that they source 90% of their ingredients locally, then use them to create Cuban dishes that have universal appeal. It’s hard to get a table for a large party, but you’ll want to go with friends so you can try more things. That avocado toast with black bean hummus is a novel way to enjoy a dish that everyone seems to make. I’m also a big fan of the ropa vieja sandwich, which doesn’t look like much, but is full of luscious, meaty flavor that will fill you. If you think you’ll have room or your second stomach will kick in, get the tres leches French toast, too. 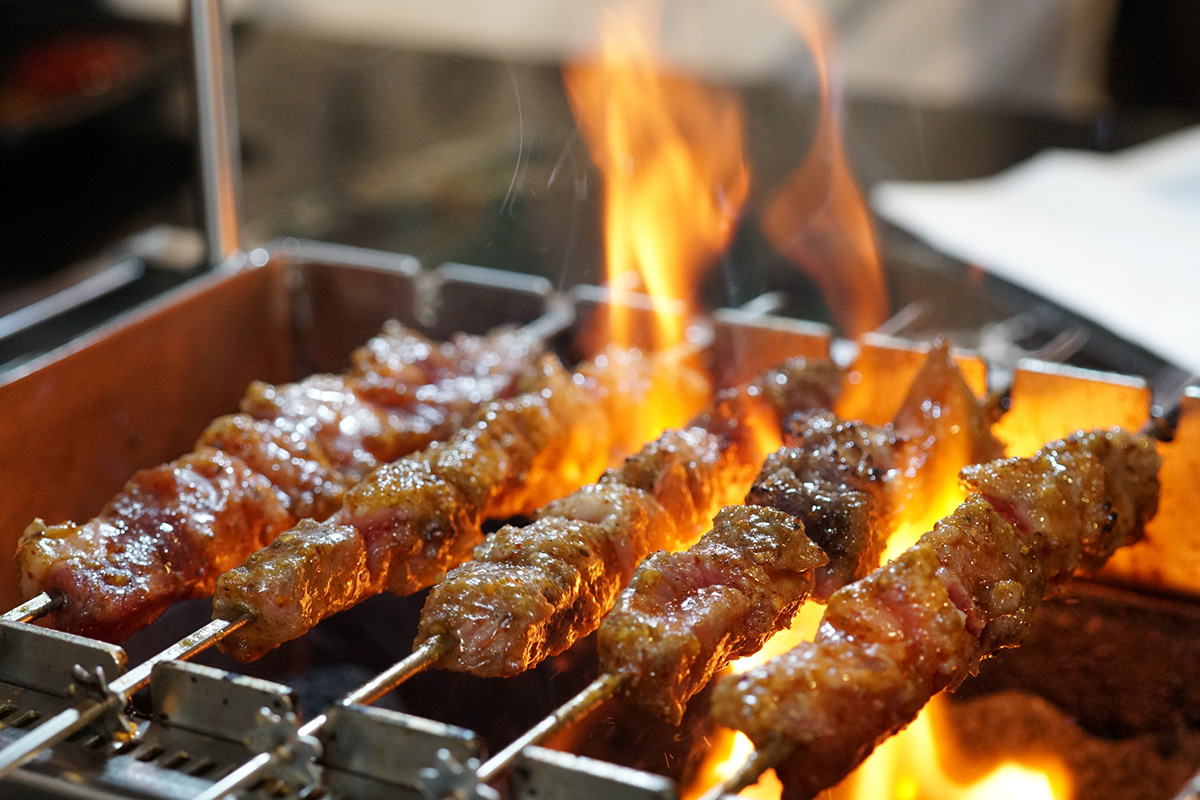 Everyone knows Japanese yakitori, but people are just learning about Chinese-style skewers. Too bad Honolulu Skewer moved from its space on Makaloa Street to a smaller restaurant in Kapahulu, because now it’s impossible to get a seat without a reservation. Every table is equipped with electronic tabletop self-rotating grills, so you can watch your order cook and pull it off when it’s to your liking. Whether you order meats or vegetables, be sure to sprinkle their house blend of dry spices on your food to add complexity and heat. 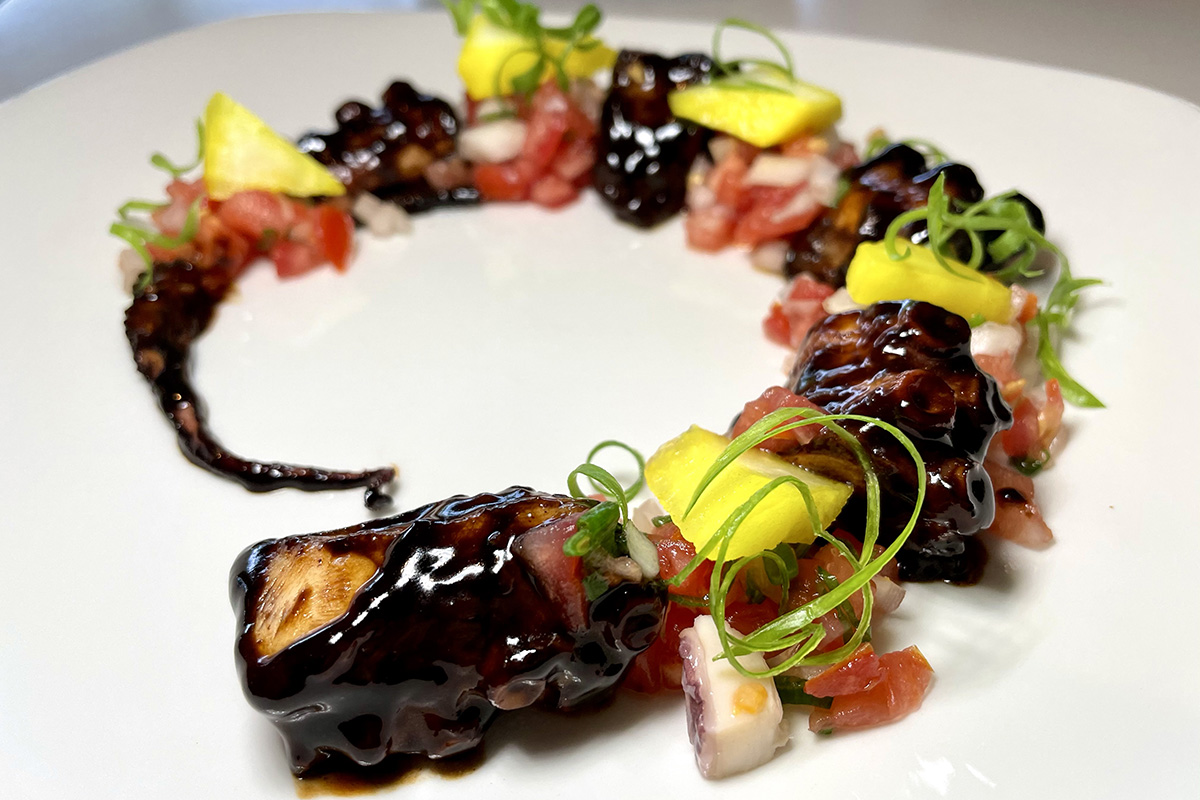 It’s hard to believe owner-chef Keaka Lee is so experienced and well-traveled that he can bring such a cosmopolitan menu to Honolulu. I first reviewed his work when he was a student at Kapi‘olani Community College in a cooking competition and I was a novice blogger. In my mind, he’s still a student, but when I taste the worldly flavors in his dishes, I remember that he built his culinary experience for many years all over the mainland. I’m a fan of his tagliatelle with shrimp and bulgogi pork Bolognese and Let’s Tako ’Bout It char siu octopus, and I love that he uses local ingredients. And bonus, you can BYOB with a small glass (instead of corkage) fee for lunch and dinner. 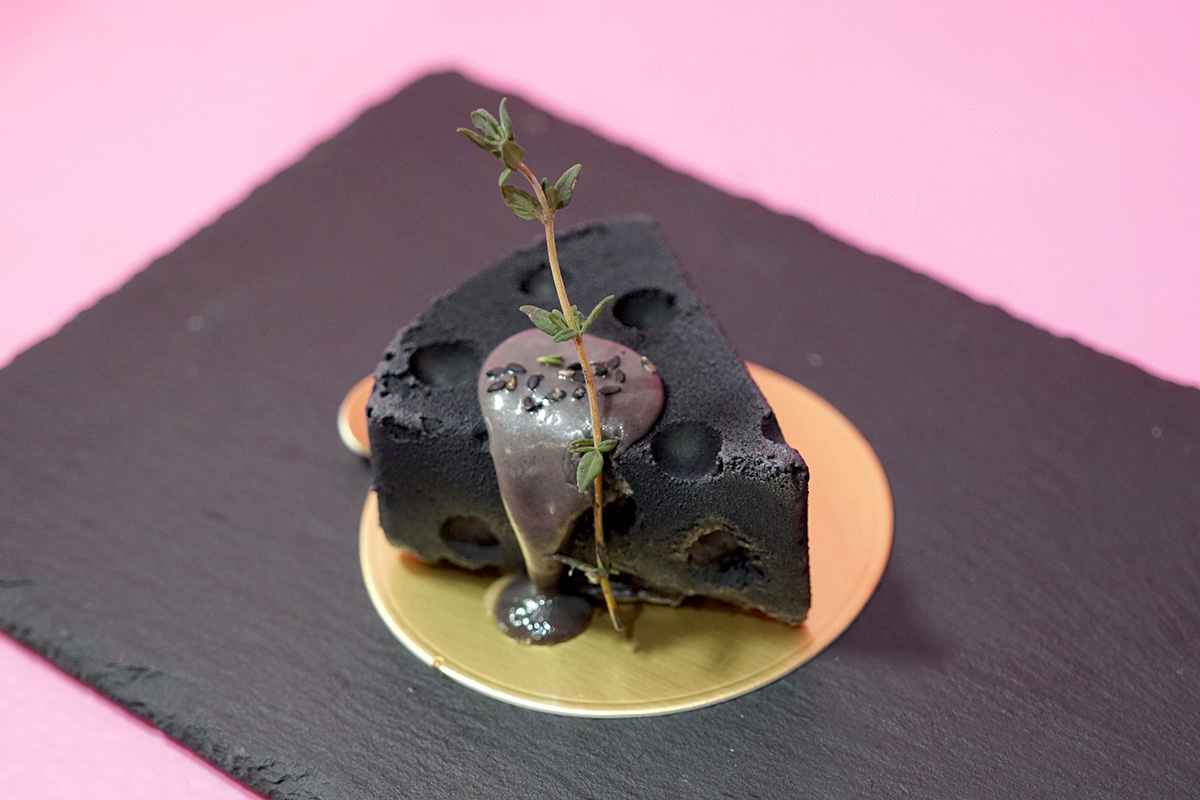 Any of you readers remember The Little Oven on King Street? People went crazy for the pretty, Japanese-style dessert creations. Part of the allure was that it wasn’t always open; if it was, you were lucky to get a seat. Well, if you go to Malu, located in Samsung Plaza on Ke‘eaumoku Street, the style of desserts will remind you of Little Oven, but prepare to take your dessert home, since there are only maybe five seats and you can’t crowd inside due to social distancing. Pastry chef Taka Horiki always has an assortment of cakes or tarts by the slice, puddings and delightful cups of chiffon cake with different toppings. They’re as lovely to eat as they are to post on your Instagram. Order ahead of time or go early to ensure you get the dessert you want. And to add to the quirkiness, you can also get kim bap (Korean sushi). 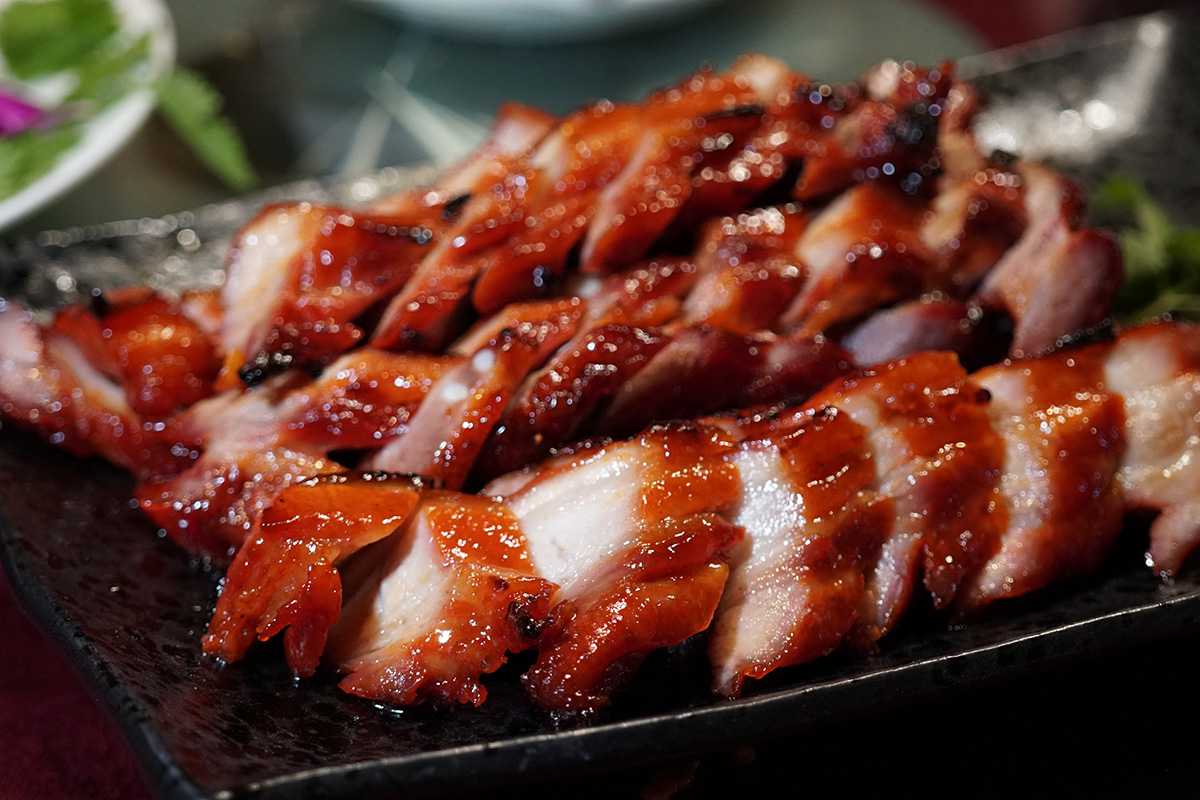 I’ll be blogging about this place soon, but I’ve already been several times and as you read this, I’m having lunch here with an out-of-town guest. I’ll admit, I wasn’t a fan when the restaurant was on Alakea Street, but now that it’s on Wai‘alae Avenue, I look forward to eating here. The chef previously worked at the high-end Beijing Restaurant in Waikīkī, which is probably why I’m attracted to the food. You’ll need to order the exquisite char siu at least one day in advance, as it’s not on the menu. The explanation is that they use fresh pork, not frozen, and it needs to be marinated. I asked, “Why don’t you just have it on the menu all the time, since you know everyone will want it?” No one had an answer for me for that one. (Tip: Parking is at Salz Lock & Key next door.) 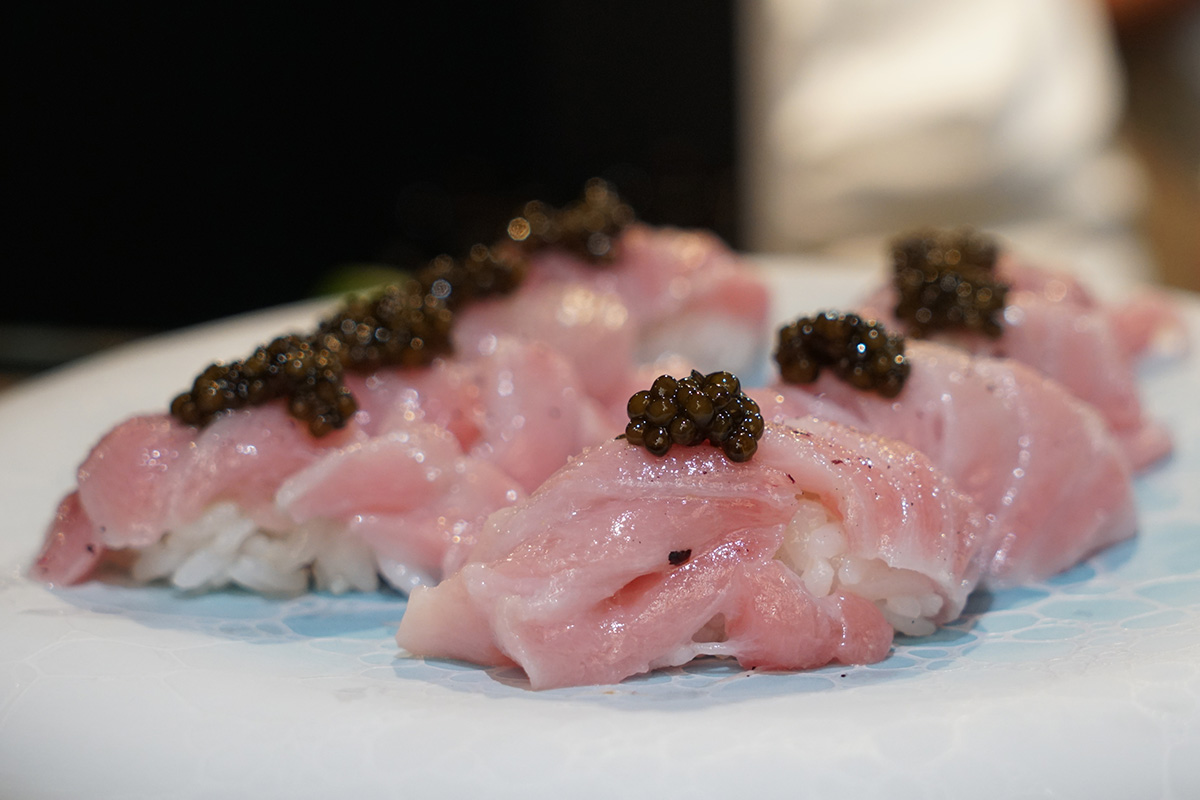 Jason Yamaguchi and his team take French cuisine and give it a delicate Japanese twist … or is it the other way around? However you look at it, the menu at Mugen reflects talent and experience, with fancy presentation, but super approachable food. Dinner is a tasting menu of several courses, always starting with Osetra caviar on a mochi blini followed by unique dishes that you’ll never see anywhere else. If lunch comes back—and I hope it does—it’s quite a treat to get high-end interpretations of comfort food like wagyu menchi katsu. Plus, Mugen caught the attention of a certain former president from Hawai‘i. Ahem.

SEE ALSO:  Where to Eat on Your First Visit to O‘ahu 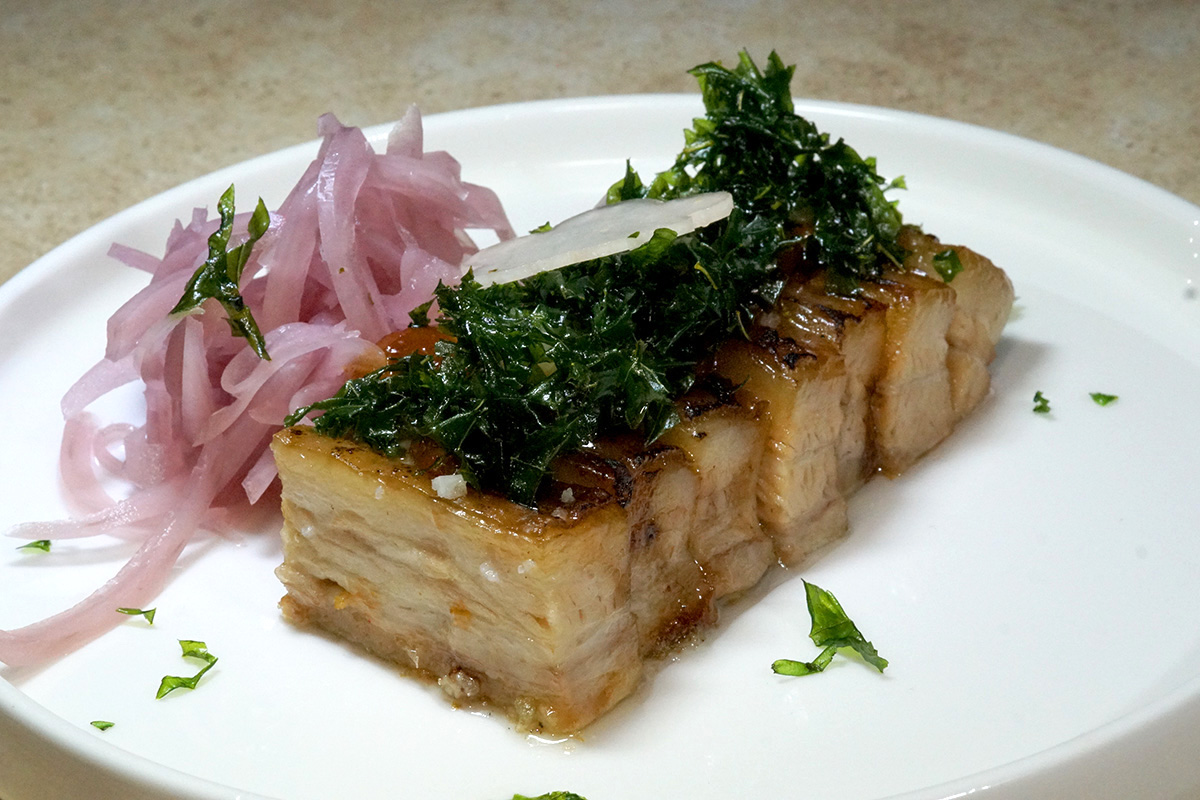 Speaking of Korean fusion: It seems like a lot longer, but Hyun Kim has only been in her Nu‘uanu Avenue spot for two years. She offers all of her customer favorites all the time, like the pork belly brûlée, Korean chicken with mochi gnocchi, and vegan truffle mandoo, but every month you can count on an extensive new specials menu based on the season … or Kim’s mood. The prices are good and the presentation can be kind of fancy, but the food is always full of comfort and warmth. The nice thing about the restaurant is being able to dine in a covered outdoor area in the back, so you’re hidden from the peering eyes of passers-by. 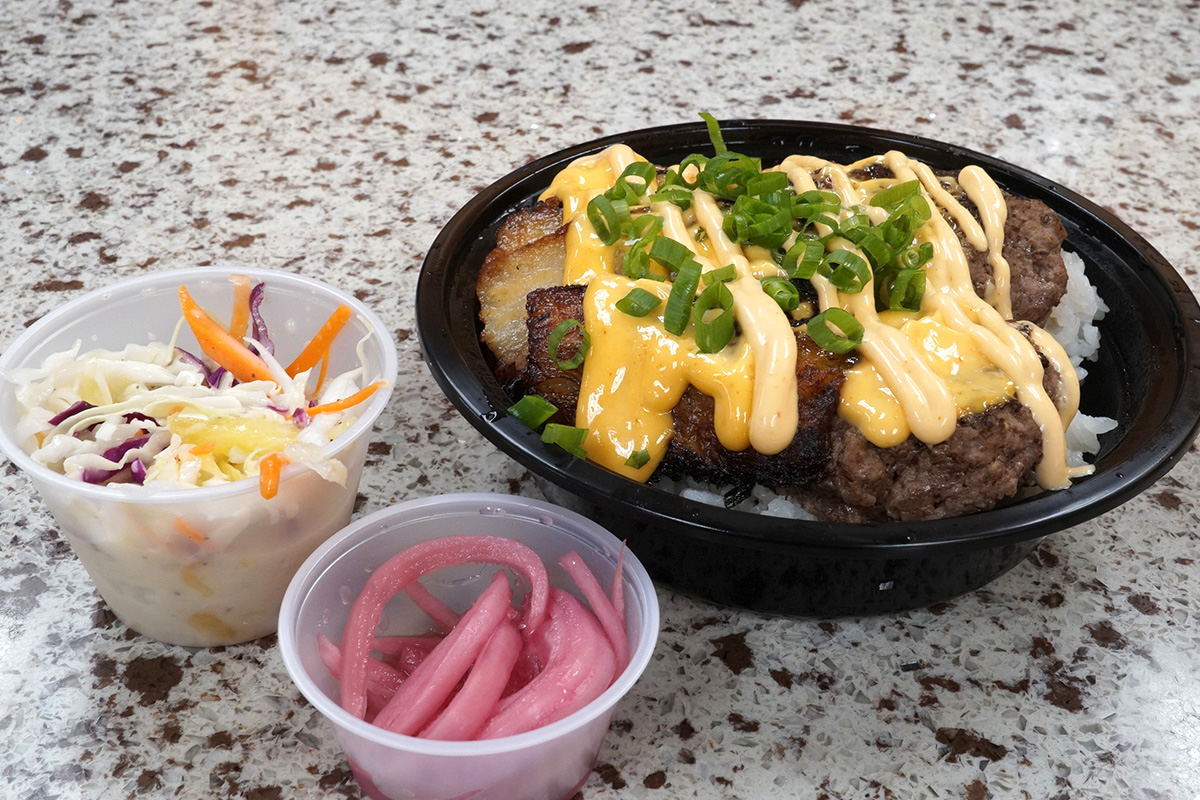 Although it’s hidden in Kalihi, its proximity to the airport makes ‘Ōlena a great stop after landing or better yet, before heading out. Ron Simon has worked at various high-end restaurants around town and brings that training to his more affordable plate lunches, sandwiches and bowls. I love his poke bowl, but if I’m hungry, I might order an adobo pork belly bowl. His banh mi sandwiches are my favorite, as well, because the bread is fluffy and only slightly crisp on the outside, instead of the hard, crusty rolls that cut your mouth at other places. Always order the Filipino lemonade, which features fresh-squeezed local calamansi and bits of roasted pineapple. By the way, I suggest that you get your food before heading to the airport because you’ll want to get fresh chips from the Hawaiian Chip Co. across the street, for yourself or as omiyage. 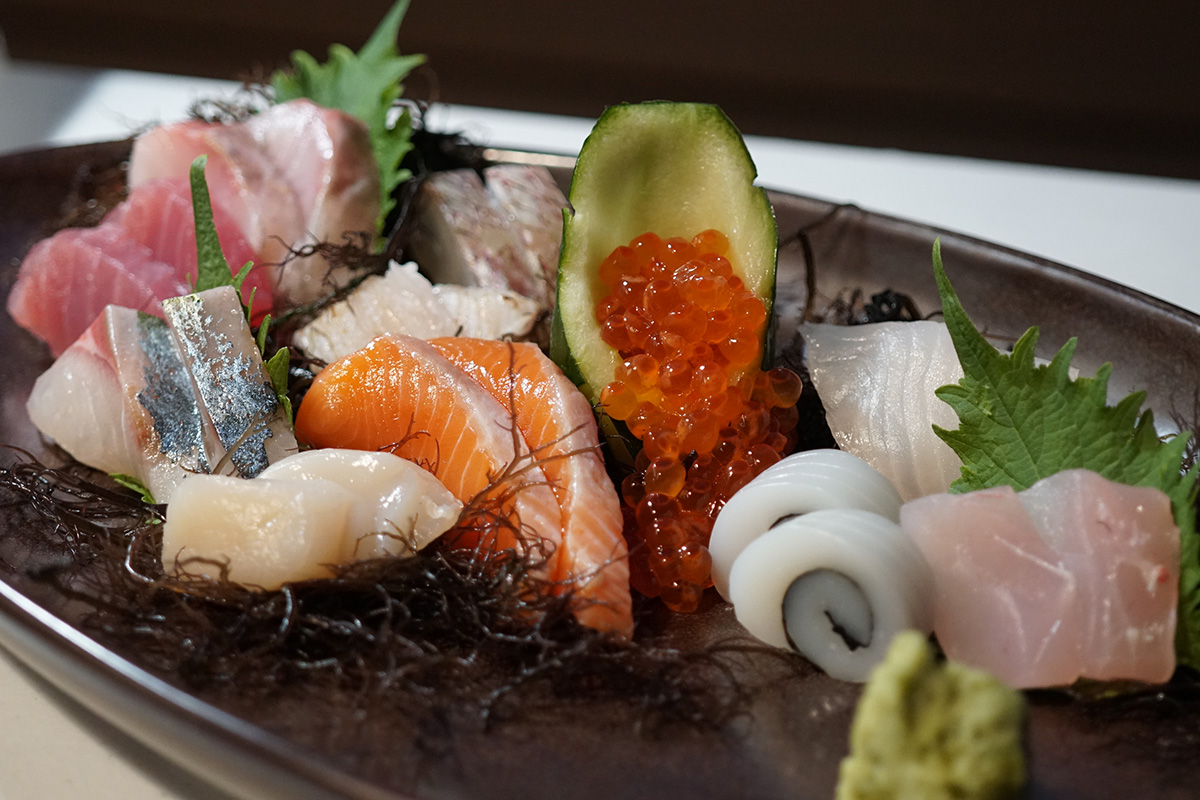 This was kind of a surprise for me. I never thought of Pitch as a place for food, until the guys from Green Bar—a vegan smoothie booth at the Pearlridge farmers market—highly recommended it. Turns out the chef is Jon Tamashiro, who worked at one of my other favorites, Izakaya Torae Torae. He serves high-quality sushi and sashimi (sometimes with items that are hard to get) at reasonable prices, alongside super local stuff like deep-fried pork chops cut off the bone into bite-sized pieces and covered in ginger-scallion sauce, miso garlic bacon fried rice, and paitan risotto. I love getting a table outside, so it feels like I’m in a breezy bistro instead of a dark sports bar. 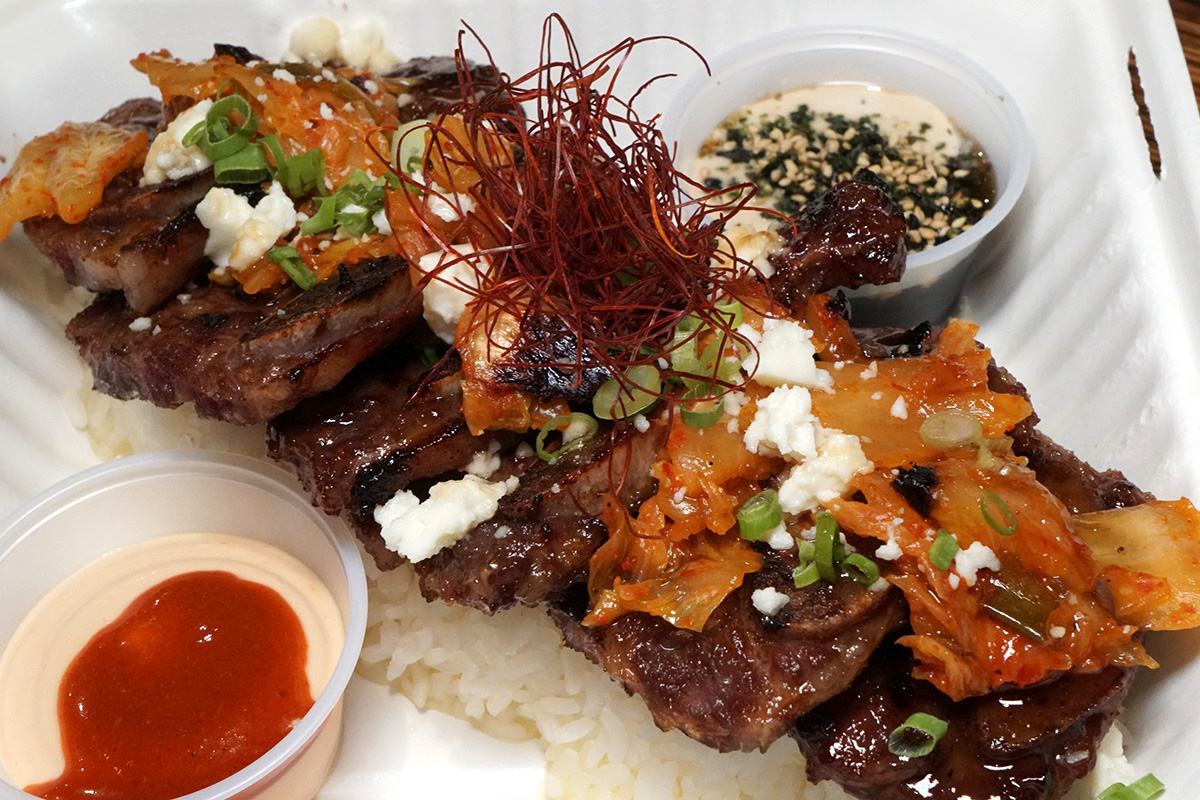 Sistah Truck itself is not new, since it had actually been a truck for many years. During the pandemic, however, Beer Lab opened in Pearlridge, and needed a “restaurant” to help qualify it. The new menu is completely different from what Eunju Jo and Mila Bang served in the truck—fancy plate lunches that reflect the local flavors that we love, taken up a notch with Korean fusion that you won’t find anywhere else. My favorites include the kalbi on garlic butter rice, the ssam special (a do-it-yourself lettuce wrap filled with rice, chiles, pork and pickled vegetables), and kim chee crinkle fries. I’m not sure how they do it, but the fries are super crunchy, even the next day. (Tip: these are not the same fries that are served with the wagyu cheeseburger.)