When Jeremy Shigekane Bought Chef Mavro in March and Rolled Out More Affordable Options, It Seemed Like a Pandemic Pivot

It wasn’t. Not exactly. 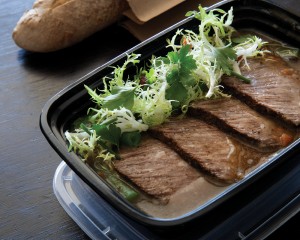 In March, Jeremy Shigekane sold sandwiches out of Chef Mavro’s back door. He peddled San Daniele prosciutto and mushroom fricassee between house-made seeded bread for $15—this, before shelter-in-place orders shut down all restaurants and other fine dining chefs began offering creamed canned corn and bentos. What retroactively seemed like a coronavirus pivot was actually Shigekane establishing Chef Mavro’s new direction. The pandemic just sped it along. Helped it, even. “Without the shutdown, we would’ve had a hard time transitioning [Chef Mavro] to anything else,” says Shigekane. “Half the people who come now have never been inside the restaurant. Mavro stands for something good, but sometimes it works against us.”

For 20 years, Chef Mavro, opened by George Mavrothalassitis, one of Hawai‘i Regional Cuisine’s founding chefs, served as an emblem of fine dining on King Street. As such, most of Honolulu didn’t dine at Chef Mavro, where the tab for two ran $300 and up. Still, in 2019, it seemed that Mavrothalassitis, who was still at the helm, would hold the line on the reputation that made him famous. Then on March 1, Shigekane, executive chef at the time, officially bought the restaurant. He planned to expand the restaurant and shift away from its reputation as a place for a once-in-a-lifetime meal, for special occasions only. There were the sandwiches, a line of retail sauces and plans to divide the dining room—to keep the tasting-menu-only Chef Mavro, but to also add a more casual bistro (M by Chef Mavro), and an even more casual brasserie (M Brasserie) with steak frites and “nicer bar food,” Shigekane says.

He found himself trying to roll out the two-year plan in six months, adapting to ever-shifting lockdown orders—he served croque monsieurs and moules frites in the parking lot, under a tent outfitted with string lights. He plated such bistro classics as beef bourguignon, and not so French beef stroganoff, carefully into plastic takeout containers. And because local ingredients were part of Chef Mavro’s foundation, he assembled CSA boxes filled with produce including mad hatter peppers and white eggplant. 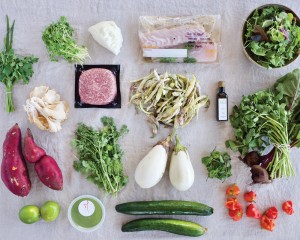 Sure, restaurants scrambling to offer takeout and foods to stock home kitchens were nothing new by then. But few did it as elegantly as Shigekane. I didn’t expect a microwaveable beef bourguignon ($20) to come as delicately arranged as it did—with tiny cremini mushrooms barely bigger than my thumb, tendrils of frisée and beef sliced and shingled from one end to the other—like discovering your sweatshirt’s pockets are lined in red silk. The flavors, too, were lighter, with the sweetness of root vegetables. Shigekane loves vegetables in a way few local chefs do.

Hence the cooking box full of produce, much of it sourced from Farm Link Hawai‘i, but also directly from small individual farms. I already order from Farm Link, so I wasn’t sure what value I’d get out of the box. Turns out, plenty: a new way of preparing eggplant, thanks to Shigekane’s recipe cards; a ginger scallion sauce to forever ruin me for others; and a revelation in fish. Each week, the box contains one of the sauces, from charred miso eggplant to yuzu brown butter, that Shigekane hopes to eventually retail at supermarkets, as well as a few proteins—Kualoa Ranch ground beef and marinated ono when I ordered it. I consider myself an above average home cook, thanks to my time cooking in restaurants, but, ironically, I only relearned the value of fine dining by bringing Mavro into my home kitchen. Ginger scallion sauce in its most common preparation—roughly chopped and its fragrance opened up with hot oil—is already a wonderful thing, but Shigekane smooths out its coarseness and amps up its intensity into a condiment sharp and sweet and full. And the ono: Shigekane manages to prep it in a way that makes cooking fish, one of the most feared proteins in a home kitchen, almost foolproof. He brines it, and though the instructions say to heat it gently in an oven, the effect is as if you cooked it sous vide, rendering the fish moist and seasoned all the way through with salt and the scent of coriander. For $140—around the price of a dinner for one at Chef Mavro—the box fed two for almost a week.

It’s clear that Shigekane delivers touches of the Chef Mavro brilliance into homes. What’s less clear is what’s going on with the name. Shigekane was eager to own and run his own restaurant—clearly not to put his name on it, but so he could take full responsibility for everything, the successes and the failures. He wants to keep the Chef Mavro brand and fine dining experience, but also spin off more casual menus. The result is a confusing proliferation of names, like M by Chef Mavro and M Brasserie, in addition to the original. “For me, the name is part of Hawai‘i,” Shigekane says. “Restaurants come and go all the time, but Mavro was part of the chefs who started to use local ingredients instead of bringing in Mainland product. What they did was important and stands for something. That shouldn’t be forgotten. I’d like to keep that alive.”