Here are our tips and takeaways from FINALLY getting to see a Broadway musical debut in Honolulu.

Getting to see a Broadway in Hawai‘i show after two years of canceled concerts and postponed performances seemed almost illicit. And that made Tuesday’s bustling opening night for Beautiful–The Carole King Musical feel especially festive.

Here’s our take and some tips about what to expect.

Even if you’re not a Carole King fan walking in, you’ll be familiar with many of the songs, both those King recorded and those that many others made famous: “You’ve Got A Friend,” “Up on the Roof,” “You’ve Lost that Lovin’ Feeling,” made popular by a variety of artists. Both Aretha Franklin and King recorded “(You Make Me Feel Like a) Natural Woman.” King got her start as a songwriter/composer in the 1960s, mostly partnered with her first husband, Gerry Goffin. They include songs such as “The Loco-Motion,” which hit No. 1 when Little Eva sang it in 1962, in 1974 when Grand Funk Railroad performed it and No. 3 when Australian pop singer Kylie Minogue recorded it in 1988. Of course, fans of the 2000s TV show Gilmore Girls will recognize “Where You Lead (I Will Follow)” as the show’s theme song, performed by King and daughter Louise Goffin.

The show weaves dialogue between the songs performed by a cast of more than 20 to tell the backstory of King and Gerry Goffin and her early solo career. And that makes for a more cohesive experience than many other jukebox musicals. The cast is talented: Sara Shepherd as King, James D. Gish as Goffin, Sara King plays Cynthia Weil and Ryan Farnsworth as Barry Mann, a songwriting couple rising with them. The entire cast seems to hum with energy. 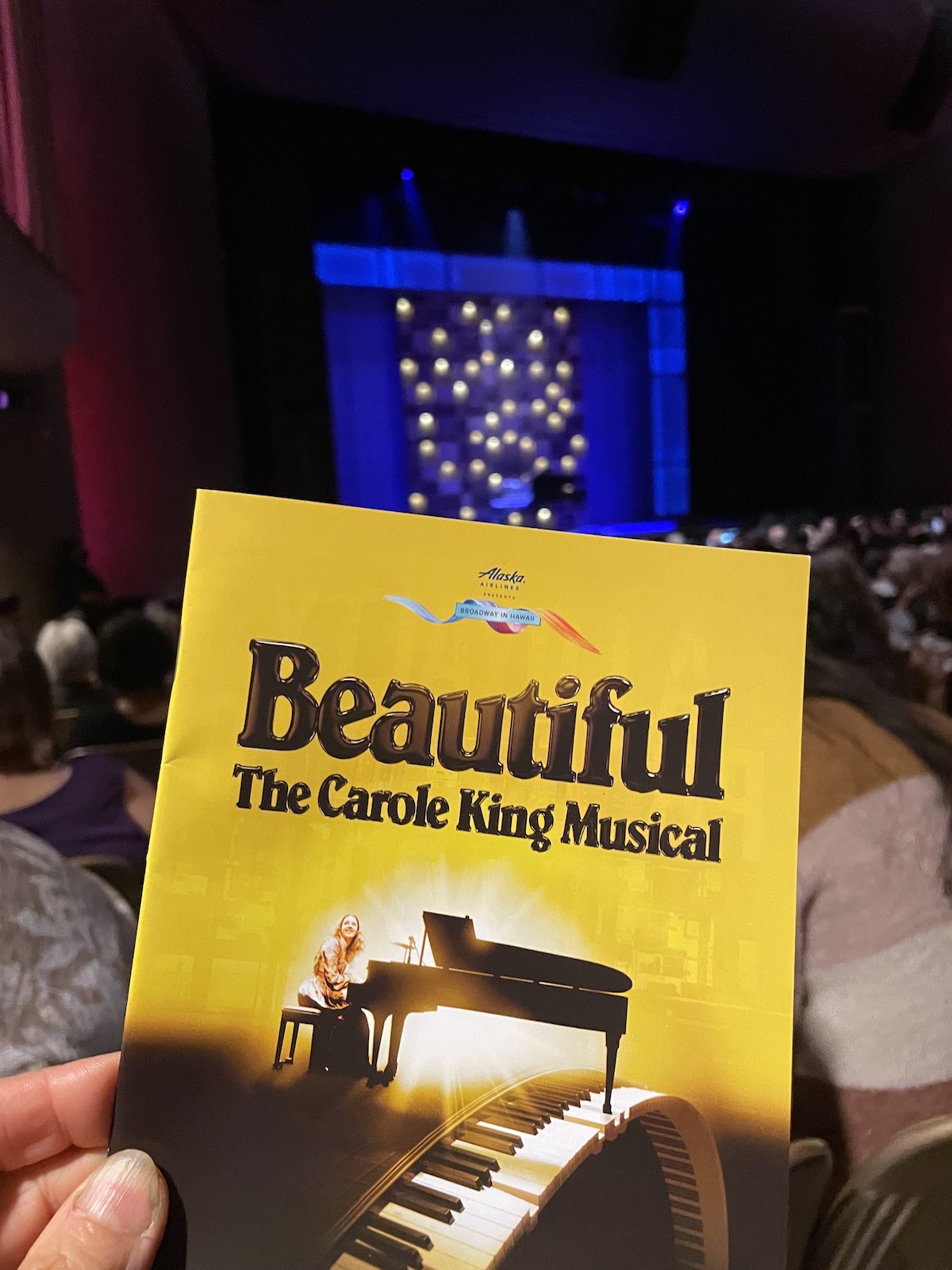 Even though season ticket sales began months ago, you can still find surprisingly good seats now in some of the weeknight shows in all sections because of the last-minute release of individual tickets. The shows run through April 24 at the Blaisdell Concert Hall. If you have questions about how to access your tickets, check this FAQ.

Leave at least 15 minutes to park and stroll to the concert hall, then find your seat. There’s more traffic lately with more events taking place. On the weekends, the Blaisdell Arena will also be hosting events so there will be more competition for parking on campus. Street parking can often be found where you don’t have to pay the meter after 6 p.m. The main entrance to the Blaisdell parking garage is on King Street at the intersection with Victoria Street. Parking is $8 so bring exact change if you want to get through quicker. We did that but didn’t keep in mind that the parking lot design means we needed to drive all the way through to the end before we could loop back for a space in the middle that’s closer to the concert hall and that took some time. 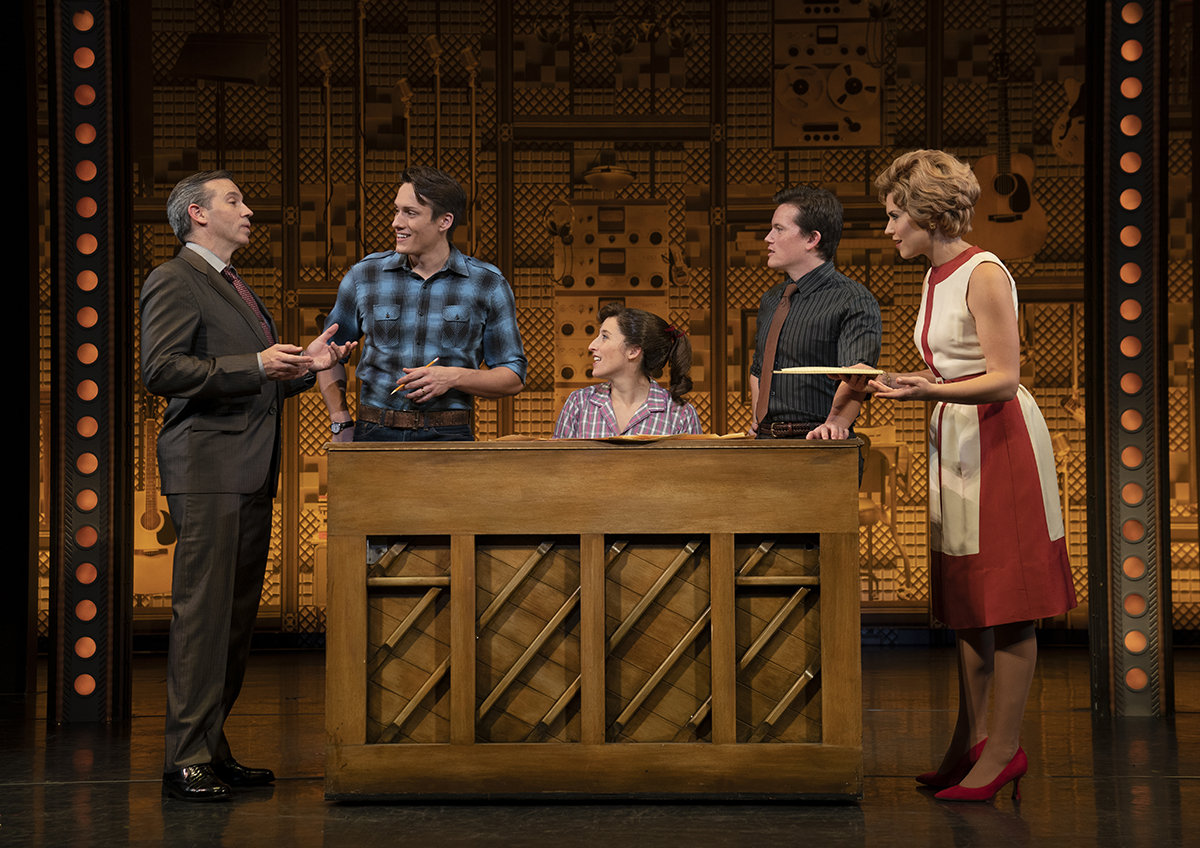 This production runs 2 and ½ hours, including one 15-minute intermission. You’re sure to run into someone you haven’t seen in two years so be prepared to dust off your socializing skills.

Bring a comfortable mask. The organizers recommend but don’t require masks during the performance. Still, it appeared the majority of theatergoers on opening night wore masks during the show. You don’t have to show ID, vaccination card or recent test. 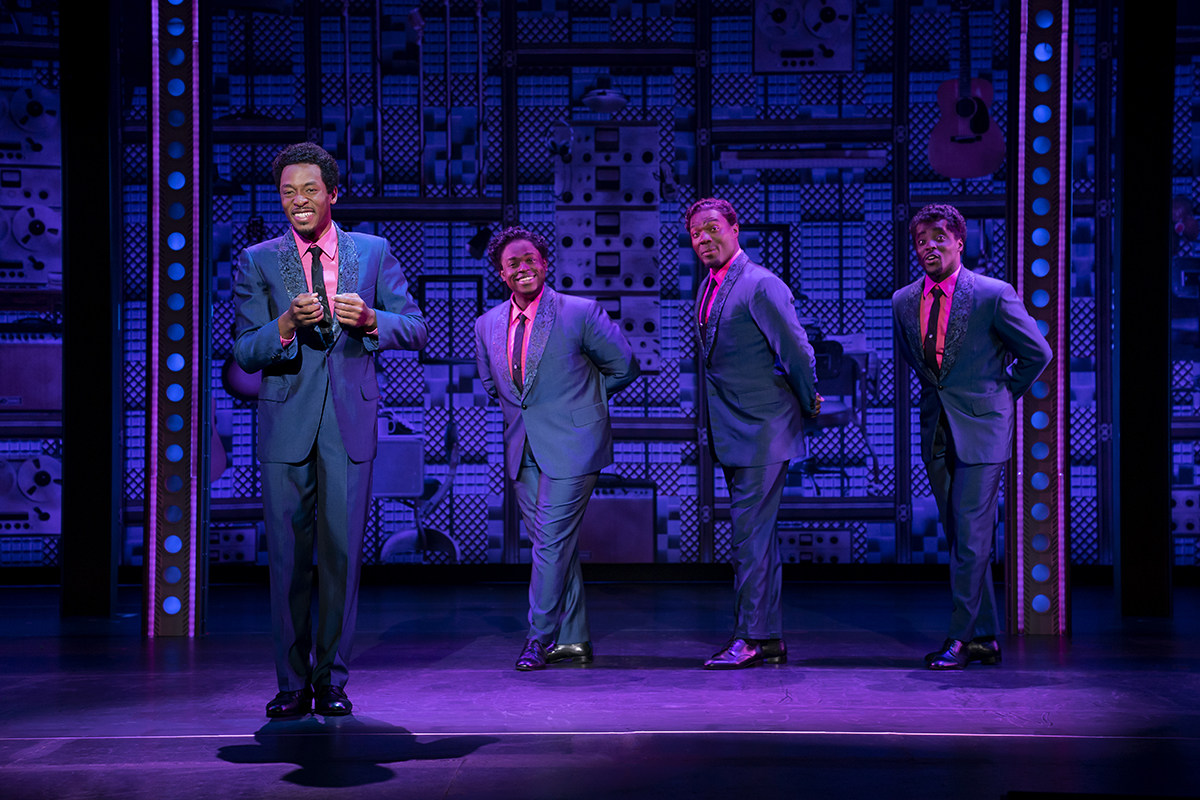 There are more restrooms for women after renovations but long lines still remain a thing for women. We found the fastest-moving women’s bathroom queue in the Diamond Head-makai side of the concert hall. The lines move quickly because staffers are herding people through, calling out when a stall opens and nudging patrons through, while assuring everyone that the show won’t start if there’s still a line in the bathrooms. 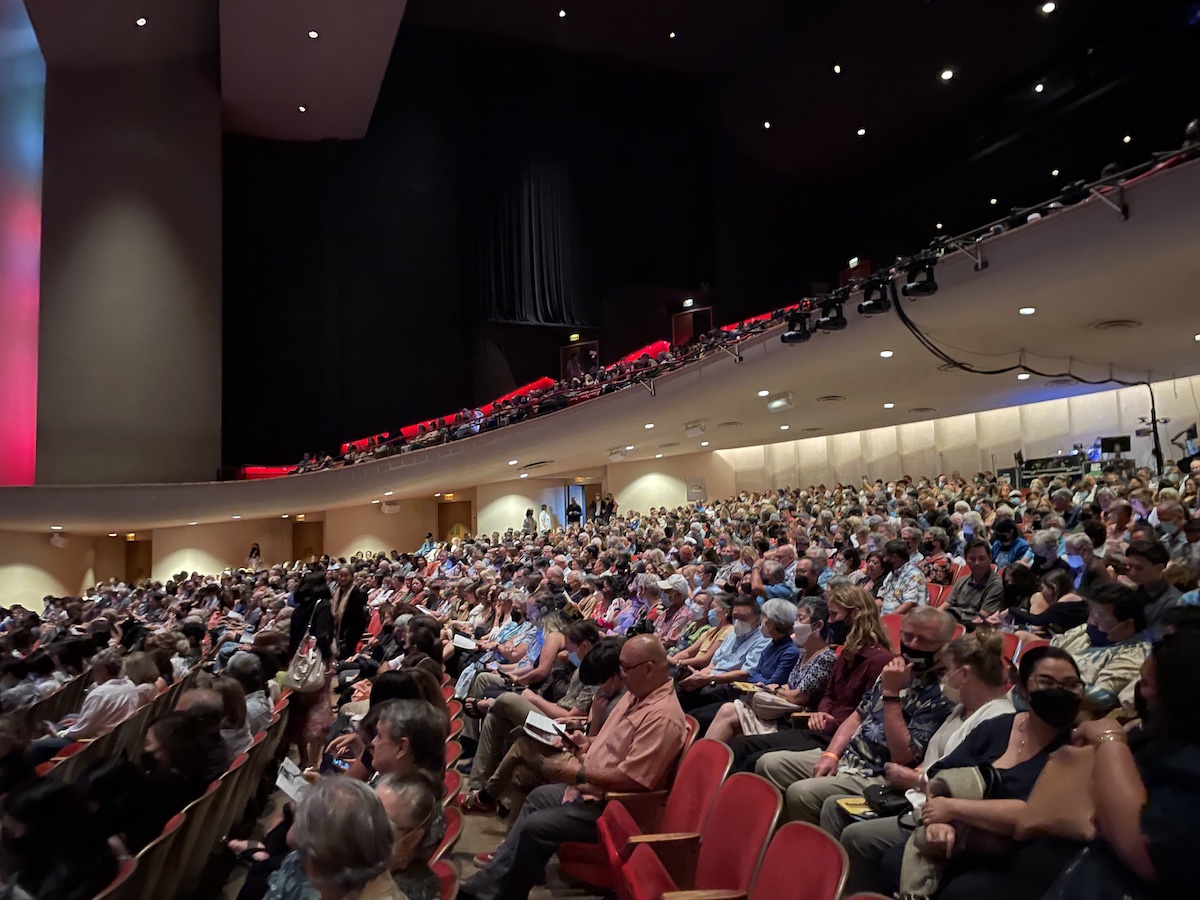 Starting from an hour before the opening curtain, concession stands sell snacks and drinks. While most take credit cards, it’s a good idea to bring cash. There is an ATM in the lobby. And you can take drinks into the concert hall after intermission but not food. Show swag: We saw a white tote with a blue show logo but did not closely check out the shirts, mugs, books and other merchandise for sale. 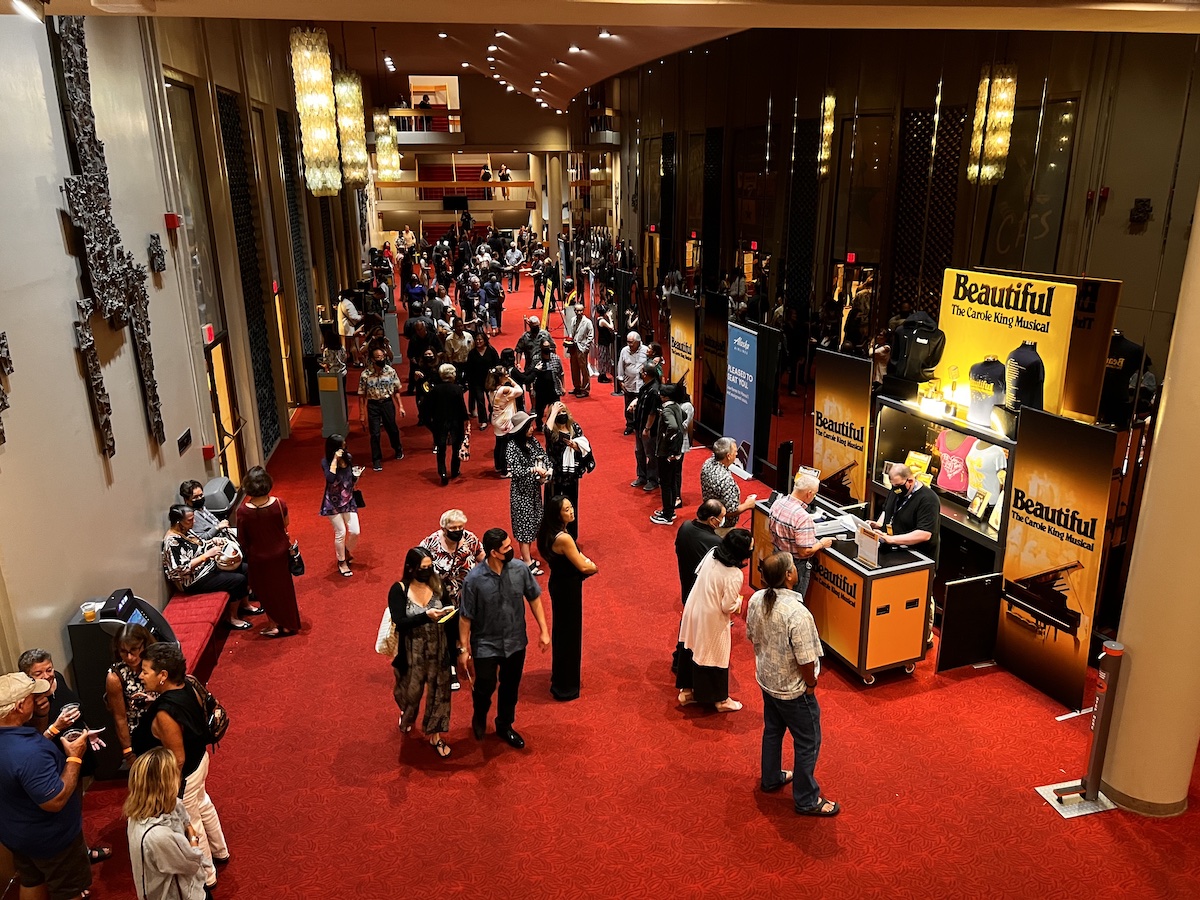 Can’t find a ticket? Want to see it again?

There are limited numbers of standing room only tickets that will be sold before each show.

Good news: Local theater is back with a broad array of shows. We just saw Diamond Head Theatre’s latest production of Jesus Christ Superstar and the time flew by with a lively cast, wonderful orchestra and some fun surprises in the latest staging of the musical by Andrew Lloyd Webber and Tim Rice. It’s shocking to think the show first opened more than 50 years ago but continues to evolve and draw crowds. The show has been extended through April 24.