We Tried It: Broadway Touring Show of “Jersey Boys”

Tips and takeaways from the Honolulu debut of the hit musical, FINALLY here after being postponed from 2020.

The award-winning Jersey Boys opened this week for a two-week run—Sept. 13-25—at Blaisdell Concert Hall delivering long-lasting musical hits from Frankie Valli & The Four Seasons that include: “Big Girls Don’t Cry,” “Sherry,” “My Eyes Adored You,” as well as the often-gritty backstage stories behind the songs.

The production values shine with the stellar falsetto of the lead actor, Jon Hacker, who plays Frankie Valli, and all the engaging main players: Eric Chambliss as Bob Gaudio, Matt Faucher as Nick Massi and Devon Goffman as Tommy DeVito. along with a multi-talented supporting cast. This show reliably brings in more men per row than your typical musical theater audience, and the whole crowd warmed to the show even more after each song.

Although the music is ubiquitous for all ages, the story isn’t one of those jukebox musicals pulled together with a thin storyline. This behind-the-music plot includes organized crime, rough life on the road and the toll it takes on bands and their families as well as a lot of F-bombs, or what the producers rather delightfully describe as “authentic Jersey language.” The story starts with the band coming together in 1960 New Jersey where the career options are described as trade school, low-level crime and factory work or as one character says: “you’ve got three ways out – you could join the army, you could get mobbed up, or you could become a star.” 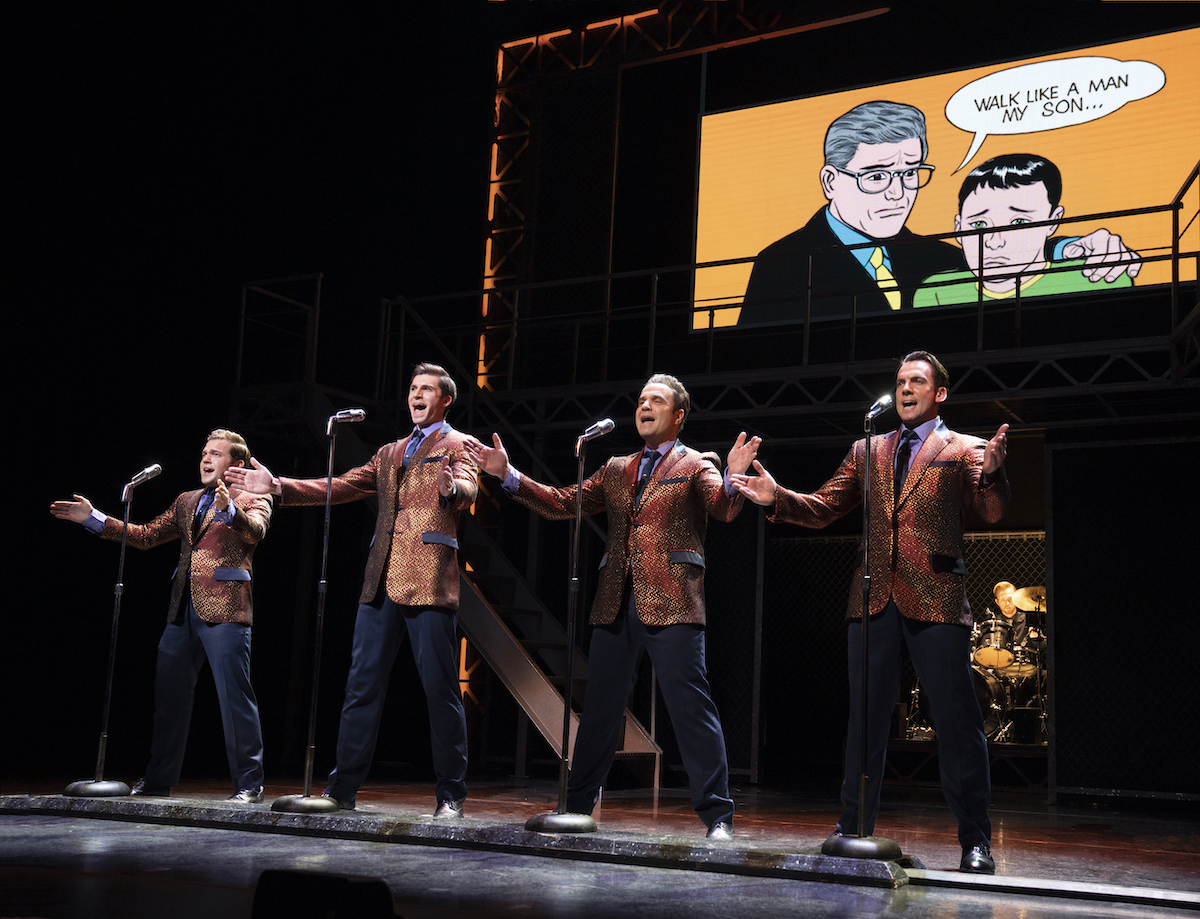 Their songs endure because just about everyone—no matter their role in life—can relate to the themes. The show opened in New York in 2005, closed 11 years later, making it the 12th longest running show in Broadway history, picking up awards there and across the globe as more companies did the show. New productions opened on Broadway in 2017 and in London in July 2021, it’s been a hit in Las Vegas and even on cruise ships.

Here’s our take and tips about what to expect: 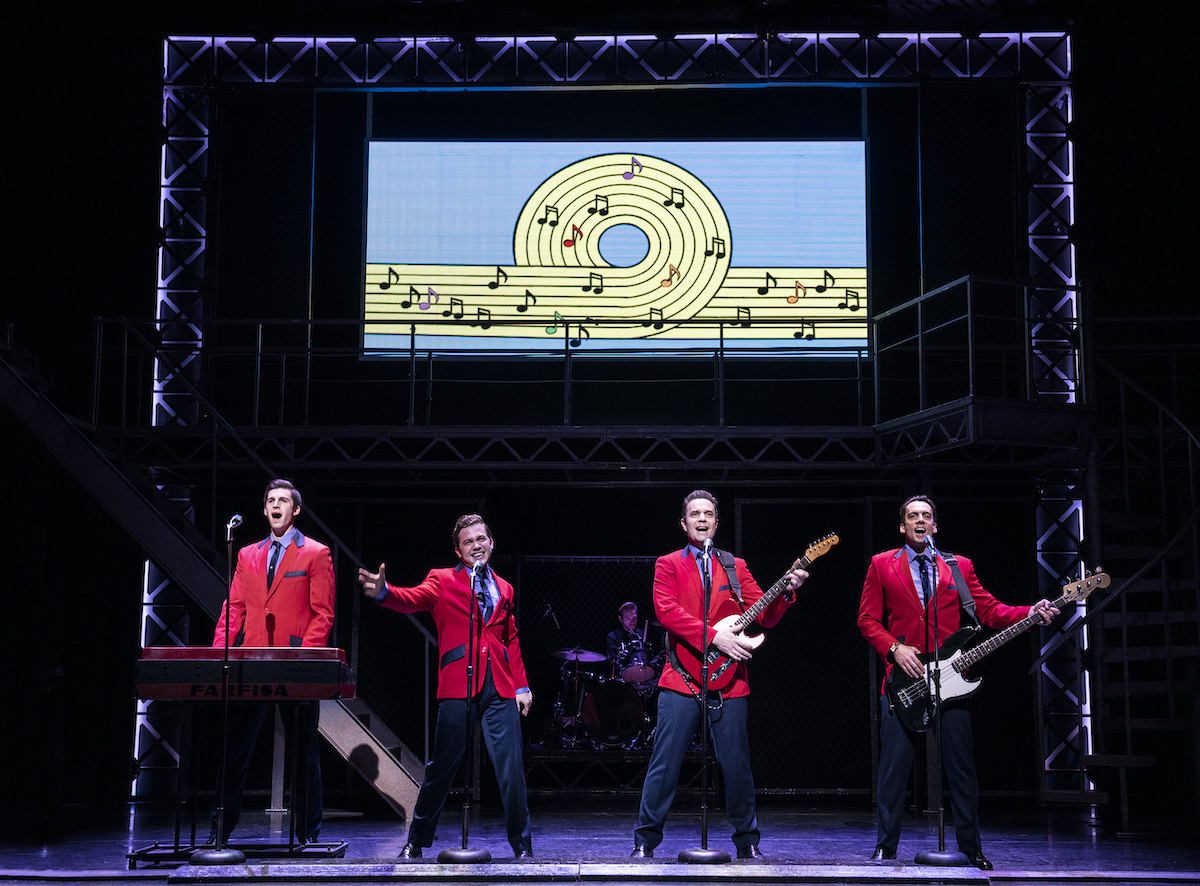 Even if you don’t think you’re a fan of Frankie Valli & The Four Seasons, you’ll know a lot of the music and be humming some of it the next day: “Walk Like A Man,” “Stay,” “Who Loves You,” “Working My Way Back to You,” and, of course “December ’63 (Oh What A Night.)”

It’s a treat to have a traveling show that delivers on props, costumes, choreography. There’s an effect where the audience feels like we’re on stage with the band that includes very bright lights shining toward the house; very bright. And it might have been a Thursday night sound glitch but when a girl group belted out “My Boyfriend’s Back,” the decibels seemed intense (and I like rock-and-roll concerts and am not prissy about loud music.)

As usual, the cheapest tickets are on weeknights and the priciest on the weekend nights. There’s one show at 7:30 p.m. Tuesdays, through Thursdays, Friday-Saturday shows at 8 p.m., matinees Saturday at 2 p.m., Sundays shows are at 1 and 6:30 p.m. Jersey Boys is the second show in the Broadway in Hawai‘i 2022-23 series presented in Honolulu by MagicSpace Entertainment. We went to a media preview on Thursday night that feature a full crowd. With word-of-mouth about the show spreading, we saw that available tickets are selling briskly.

Leave at least 15 minutes to park and walk to the concert hall, take time to find your seat or get a drink or snack there before the show. There’s more traffic lately with more events taking place. On the weekends, the Blaisdell Arena hosts other events so there’s more competition for parking. The main entrance to the Blaisdell parking garage is on King Street at the intersection with Victoria Street. Parking is $8 so bring exact change to get through faster. If you don’t mind a walk, street parking can often be found in the surrounding blocks where you don’t have to pay the meter after 6 p.m. 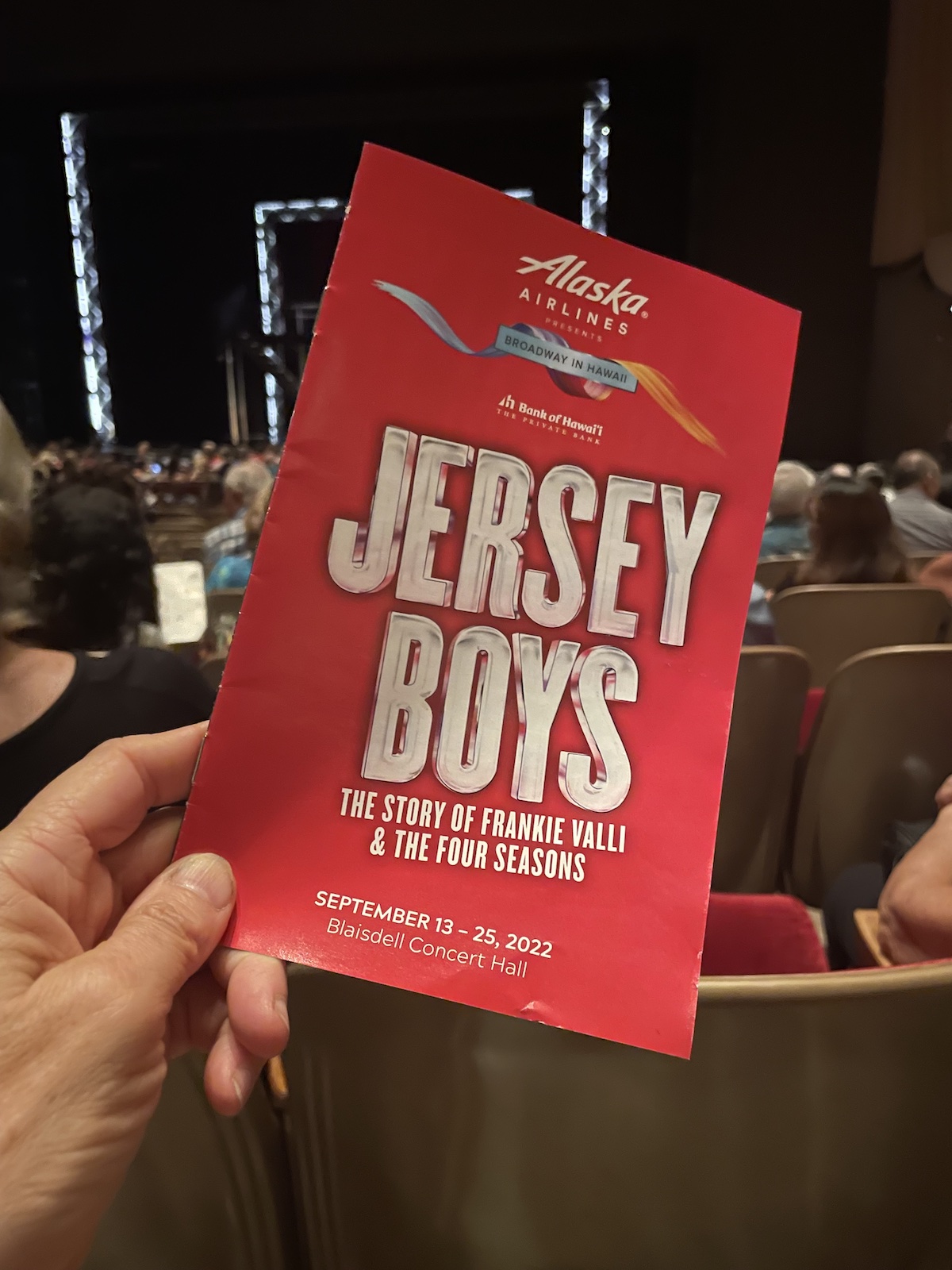 This production runs 2 hours, 40 minutes, including one 20-minute intermission.

The pre-show announcement encouraged the audience to wear masks throughout the performance at the same time they asked members to unwrap any noisy “soothing lozenges’ at the start of the show. On Thursday, I’d estimate about half the crowd wore masks.

Renovations at Blaisdell have improved the women’s restrooms in recent years so lines move quickly, with staff nudging people along. The fastest-moving women’s bathroom queue is still at the Diamond Head-makai side of the concert hall but the one diagonally up front kept a steady pace. 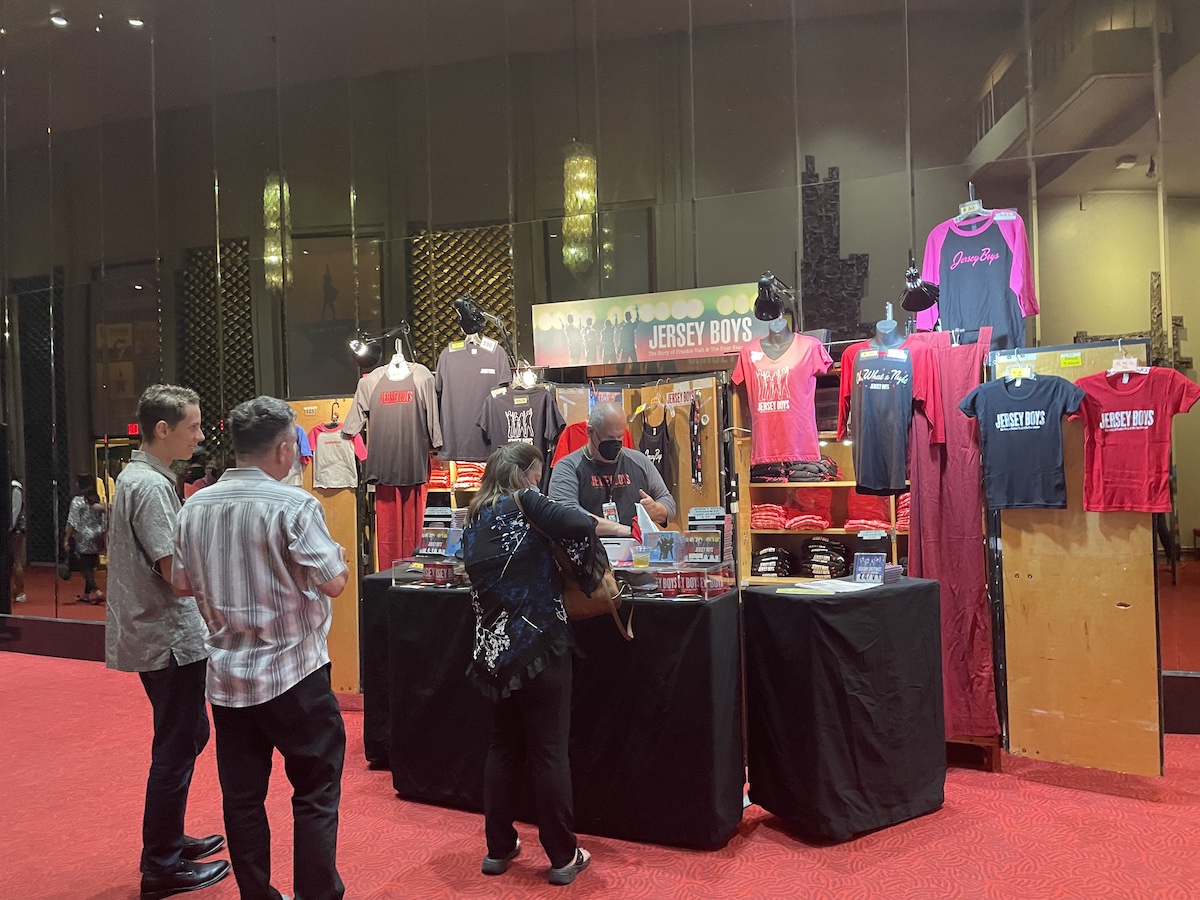 Want to take home some swag to remind you how much you loved the show? An array of T-shirts, tanks, hats, mugs and CDs await and most are priced in the very reasonable for a concert venue range of $25-$30.

Next up in the series comes the long-awaited Hawai‘i debut of hip mega-hit Hamilton, Dec. 7, 2022–Jan. 29, 2023. The Broadway in Hawai‘i season concludes with that old favorite musical, Cats,  based on the poetry of T.S. Eliot, June 13–18, 2023. Season ticket holders got first dibs but shows are sold for each show individually, too.