We Found Birria Tacos and Birria Saimin in ʻAiea

The crispy, dippable street food is hot, and so are the imaginative dishes served out of La Birria Tacos food truck. 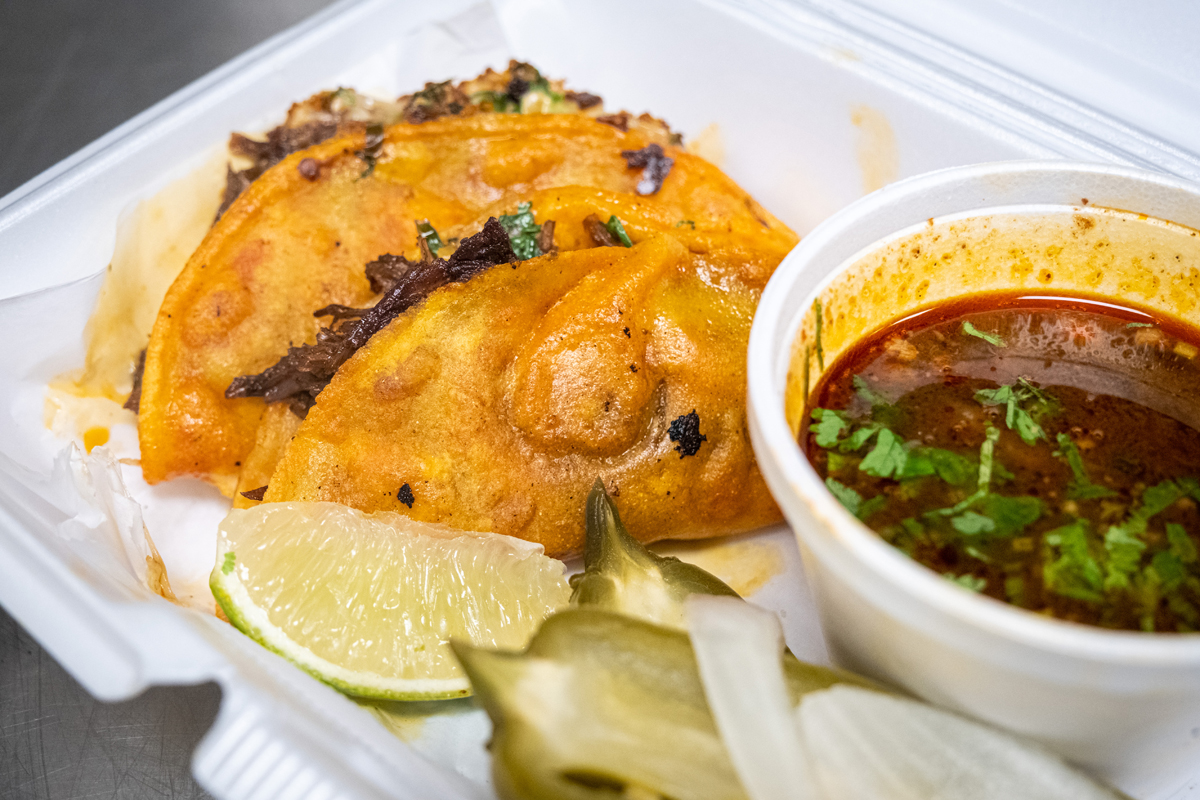 Birria is a cultural icon of the Mexican state of Jalisco; the stew features meat braised with roasted and ground chile peppers, tomatoes, onion and whole spices until it is melting off the bone. Traditionally goat is used, but beef and lamb have grown in popularity due to their availability outside of Mexico. While there are conflicting origin stories, one thing about birria is certain: It was created to make tough, gamey goat meat delicious—and it does the same for beef.

Birria tacos trended up the West Coast last year and while it is still new to our shores, the street food is suddenly everywhere—including at Pearlridge, where La Birria Tacos, a new food truck from chef Arturo Silva and business partner Justin Mizufuka, opened Oct. 17.

Each birrieria prepares its own blend of chiles and spices. The braising stock, called the consommé, is reduced and becomes the flavoring agent. Typically served in a bowl—like Jalisco’s other famous stews, menudo and pozole—birria is often accompanied by fresh corn tortillas for dipping. I think you can see where this is going. 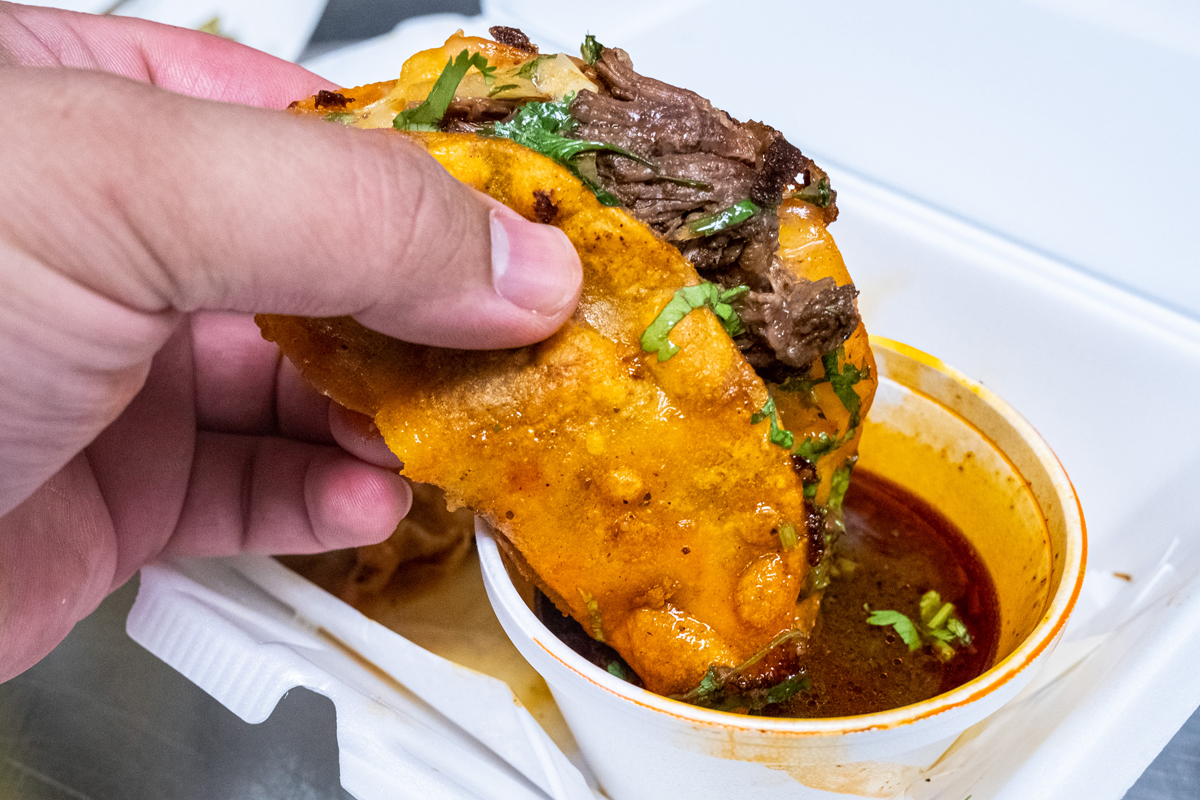 Mizufuka and Mexico City-born Silva have known each other since Mizufuka helped launch Búho Cocina y Cantina in Waikīkī with Silva as its opening chef. They invited me for an early taste at the yellow La Birria Tacos truck, parked near the Leonard Jr.’s malassada truck at the Diamond Head end of the Sears parking lot at the intersection of Pali Momi Street and Kamehameha Highway.

The menu is simple, with beef birria the focal point. Mizufuka idolizes restaurants like In-n-Out Burger that focus on one or two iconic offerings. So, the first item on La Birria’s menu is the birria queso pack ($12) with three tacos and consommé. A 12-pack ($45) is available, too.

Silva plunges 4-inch corn tortillas into a pan of crimson chile-infused oil; they hit the plancha next with a sizzle. Mozzarella cheese, shredded braised beef, onion and cilantro are sprinkled on top before the tortillas are folded and pressed flat. In Mexico, these would be tacos dorados, or crispy tacos, because of the hardened exterior they gain from meeting the hot, oiled plancha. 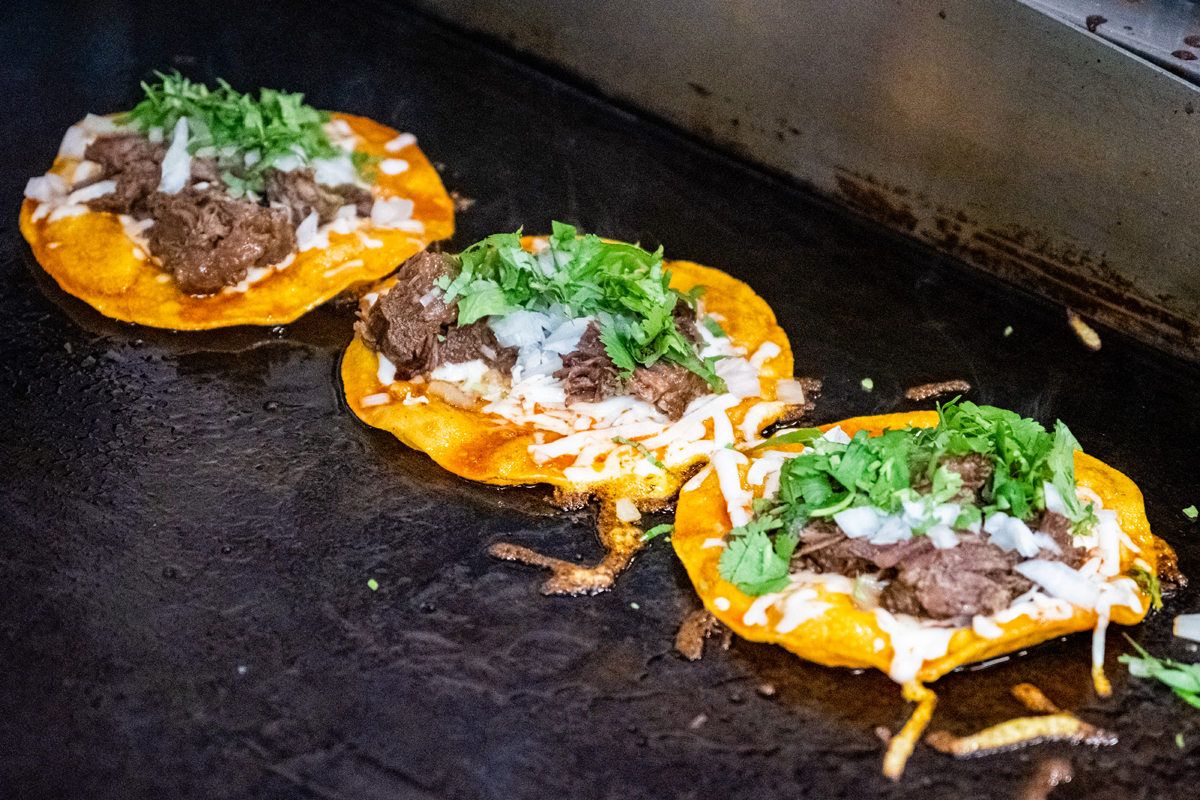 Dipping the taco into the small cup of consommé adds a juiciness and deeper flavor. If you need a pairing, the pineapple agua fresca ($4), which is simply pineapple blended with water and sugar, cuts nicely through the fatty, spiced beef and cheese.

Before you know it, you whack the whole plate. Be warned: Bring a roll of paper towels or a bib if you plan to eat in the car.

Gluttons for punishment and spice will gravitate to the Hell Fire tacos ($12 for two, $55 for 12). They don’t look menacing, but the two birria tacos on this plate receive a little more beef and a generous lashing of Silva’s spice blend.

The heat builds slowly, so you might not notice it until you take a breath. Also on the plate are Silva’s pickled jalapeños and onions, which he prepares weekly. Their acidity and low heat help balance out the slow burn, while the horchata ($4) extinguishes any flames. It’s smooth and creamy, with no huge specks of cinnamon clouding the top — I’m a fan.

By my second bite, my face has flashed 50 shades of red and sweat is beading under my eyes. I fear the heartburn that will haunt me in a few hours, but the flavor is truly unique. Ask me later if it was worth it. 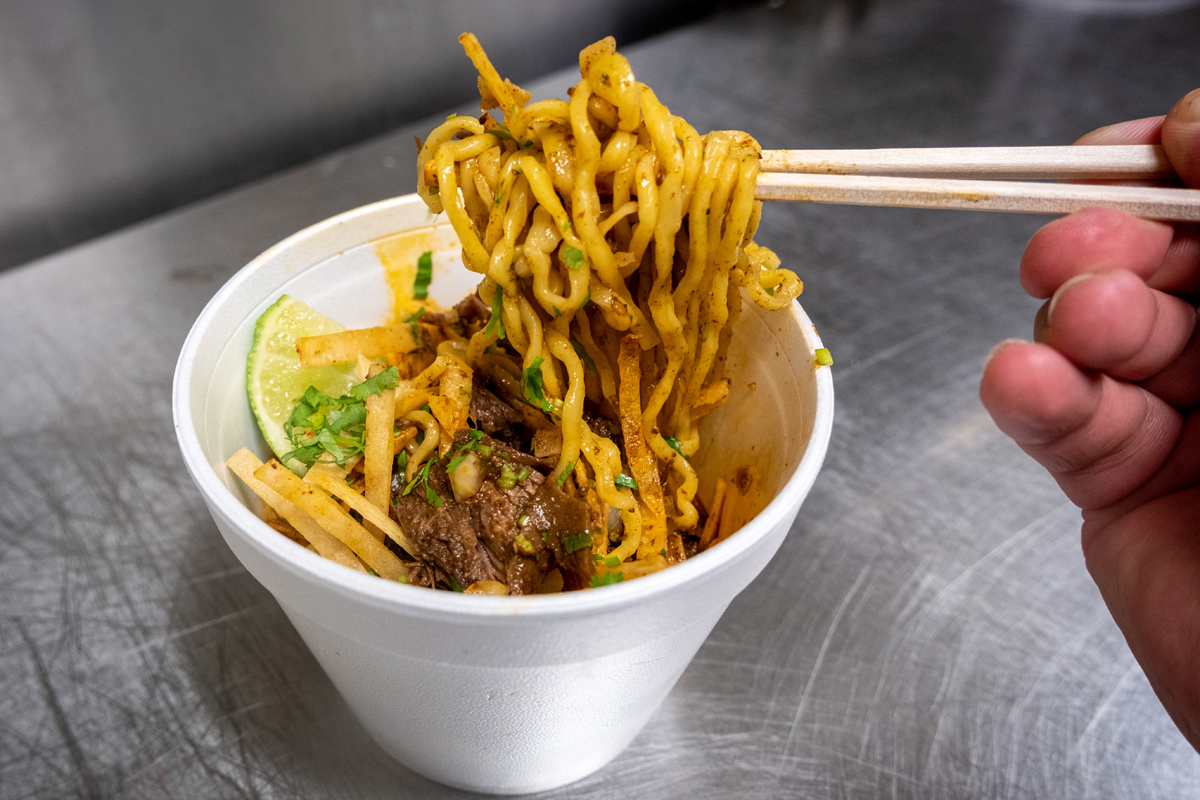 Mizufuka, who grew up on Maui and misses Sam Sato’s saimin, had the idea to add noodles to the leftover consommé broth. He and Silva tried out options ranging from thick Okinawa soba to thin ramen before they settled on Sun Noodles’ original medium-weight curly saimin for the birria saimin ($12 or $5 as a side). It comes with chunks of braised beef, fried tortilla strips, onion and cilantro. A squeeze of lime brightens it up and I end up devouring half the bowl before realizing I’m so full. And that it’s time for a siesta.