Nostalgia and new-school meet on a half-mile stretch in Wahiawā.

Full disclosure: You’re about to read a review of Wahiawā food establishments written by a guy from Wahiawā—specifically, a guy who lived for decades on the very street this article is about. It’s like Shawn Michaels refereeing the HHH/Undertaker match at WrestleMania 28. I may be a little biased, is my point. That said, Kilani Avenue is, without hyperbole, the greatest food street in the known universe. 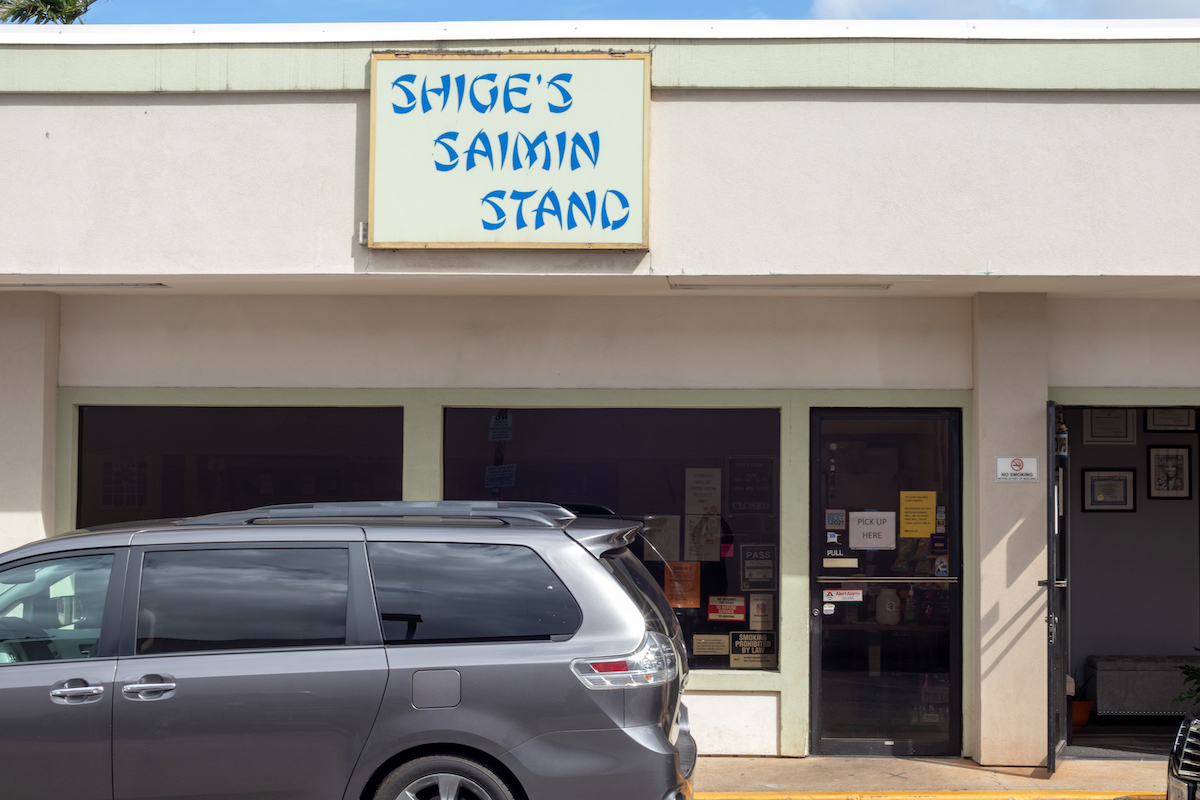 Shige’s Saimin Stand isn’t technically on Kilani Avenue. That’s right, one paragraph in and I already betrayed the whole premise of this article. For years, I lived in a house off Kilani that was a three-minute walk from Shige’s (tried and tested many times over), so I argue that it’s close enough. Plus, I think it’s against the law to exclude Shige’s when writing about popular Wahiawā restaurants, and I can’t go back to jail.

My parents are from Haleʻiwa, and when I was born, we relocated to a two-story apartment building on Kilani Avenue. (Foreshadowing!) Like me, Shige’s also has roots on the North Shore. (Segue!) Owners Ross and JoAnn Shigeoka were inspired to give the restaurant business a try by Ross’ grandparents, who operated Nakai’s Saimin in Haleʻiwa back in the 50s. 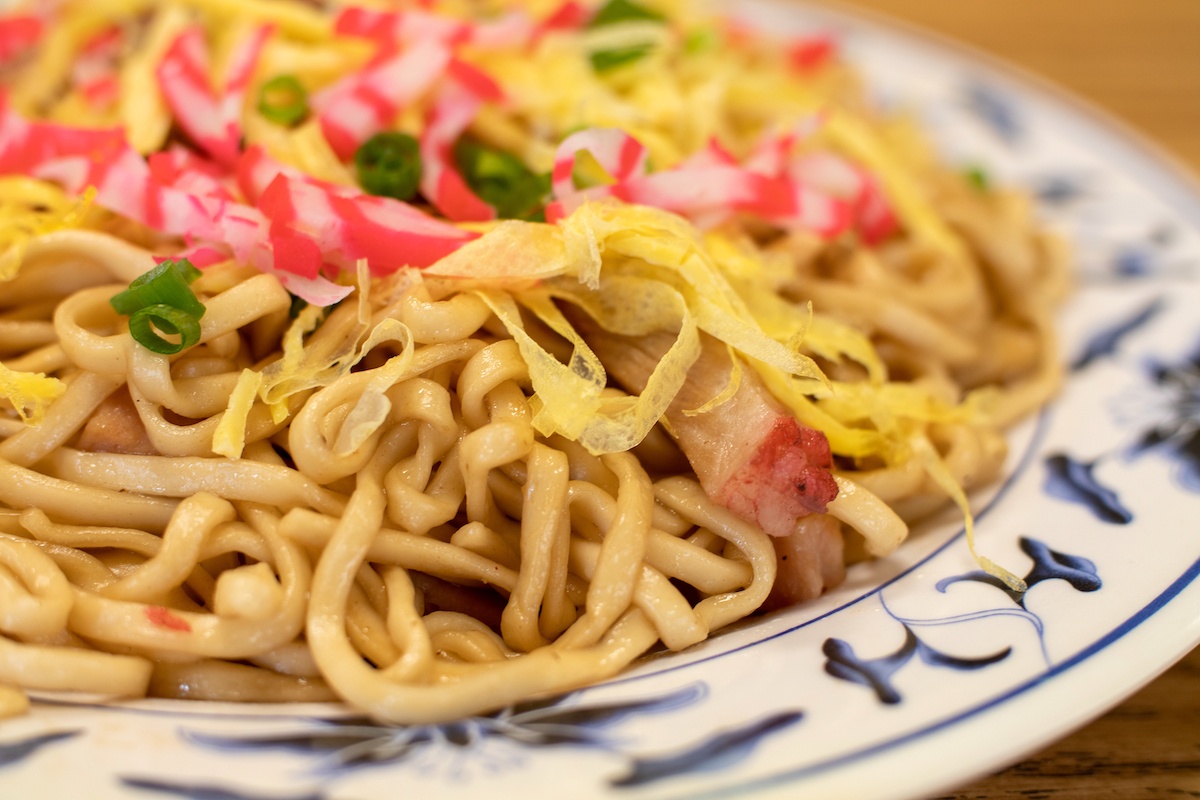 You can always tell a Shige’s saimin by the flat shape of the noodles, made in-house at 5:30 every morning. Aside from a few plate lunches and curry and miso saimin/udon options, the menu has remained largely unchanged since their opening in March of 1990. My usual order remains largely unchanged as well. First, the fried saimin ($8.95): green onions and strips of egg, Spam, char siu and fishcake provide a flavorful texture complement to the perfectly firm chew of those flat noodles. 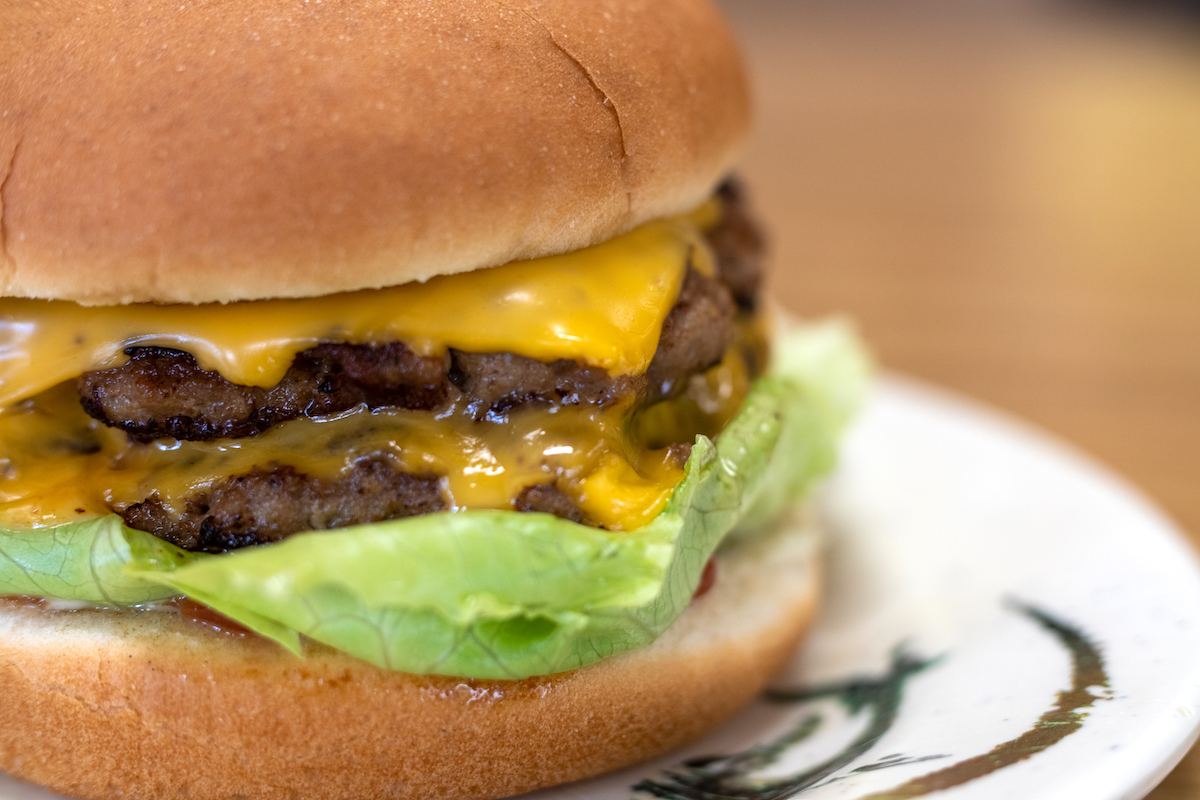 Then, the double cheeseburger ($4.40): Sure, you can get onion and tomato in the deluxe, but all I need with those tender, juicy hamburger patties, cheese, ketchup and mayo is lettuce. Oh, and buns. And the classic yellow wrapper that becomes transparent over time. 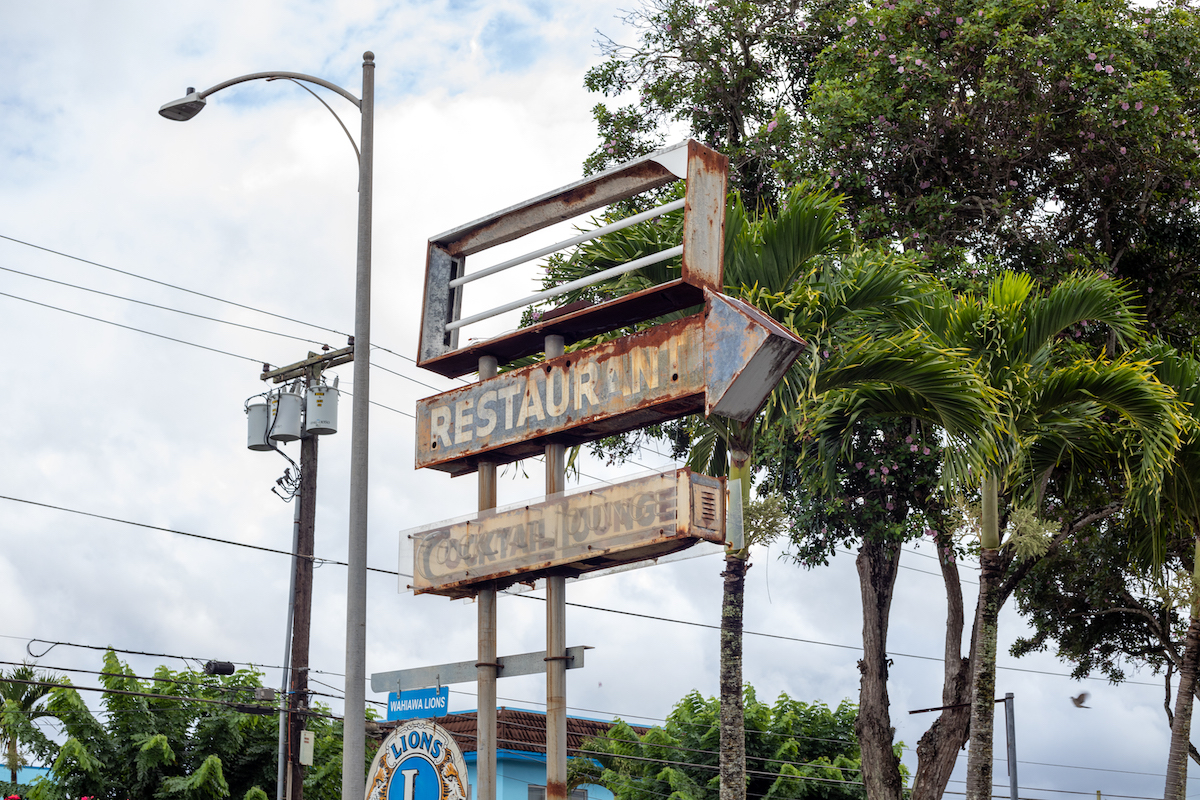 Whenever I took my three-minute walks to Shige’s in the evenings, I would sometimes catch the sounds of live jazz music floating through the chilly air from nearby Dot’s Restaurant, at the corner of Kilani and Kamehameha avenues. The nights are quieter these days: Dot’s closed their doors at the start of the pandemic, like many other businesses. But as others adjusted operations and reopened, large wooden boards at the restaurant entrance stayed nailed up, covering doorways that had welcomed generations of Wahiawā families since 1946.

I had countless sizzling hamburger steaks there, always with the tin cup of pudding afterward. It was worth the scene it caused as the skillet wound its way through the dining room, the eyes of curious patrons following the trail of sizzle and smoke from the kitchen to my table. Dot’s was the quintessential old-school Hawaiʻi diner. There was green carpet that I assume was original from the ’40s, a touchscreen jukebox, and shoji (doors, not Dave). The adjacent lounge was a perpetual nightly Leilehua High School reunion. Years ago, I witnessed a friend propose to his girlfriend in the banquet hall. They’re now married, with one daughter. In early March of 2020, I attended a large gathering in that hall, during which there were whispers of whether this coronavirus thing was something we really needed to worry about. Many of my childhood friends were there, and one of them brought his parents. His mother was a tough woman who practiced tough love and beat cancer. She made the best pastele and tried to teach me how to tread water in a pool when we were kids. That day at Dot’s was the last time I saw her. She died unexpectedly just five months later. For me, Dot’s represents a much simpler time, in so many ways. 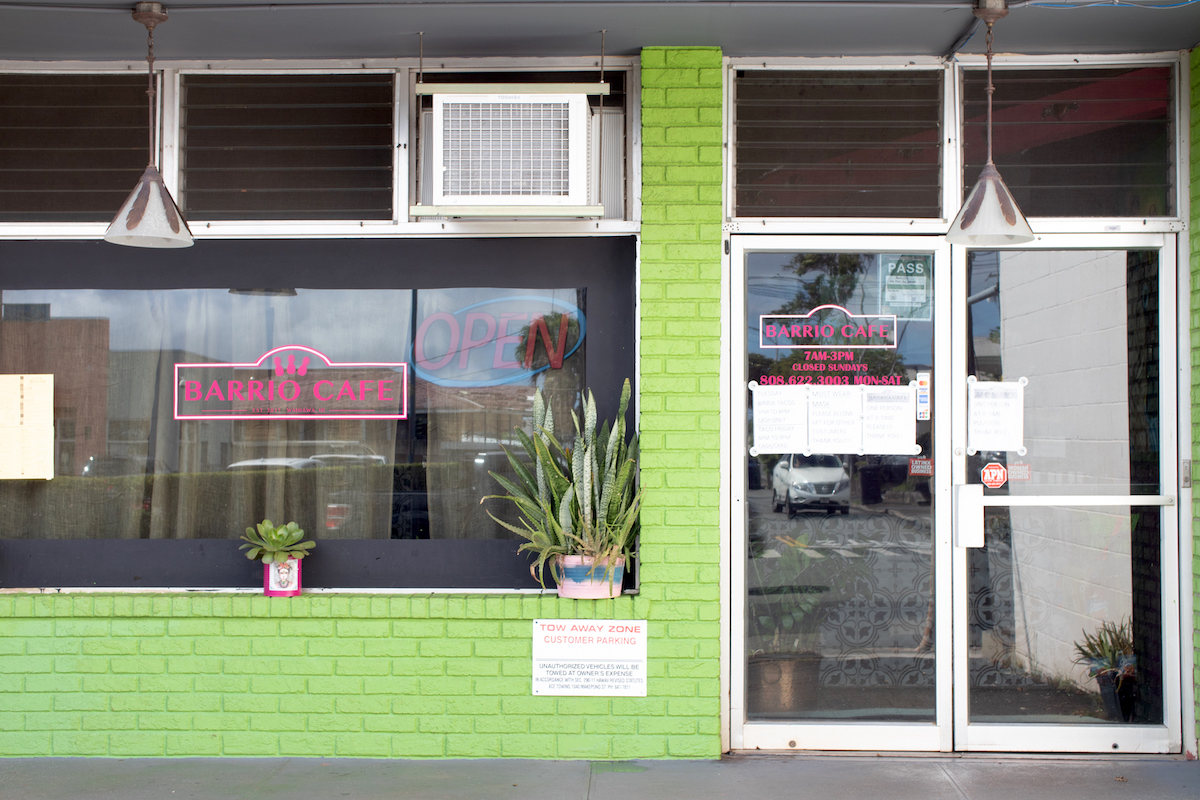 That two-story apartment building on Kilani I mentioned earlier once had a barber shop on the ground floor. Long gone, that space is now occupied by Barrio Café. Opened in 2017, it may be the new kid on the block, but its owner, Miriam Oliva, is neither a stranger to Wahiawā nor to Mexican restaurants—or to Mexican restaurants in Wahiawā, for that matter. Her mother runs the longtime establishment at the gateway to Wahiawā, El Palenque.

Encouraged by her mother to set out on her own (“Moms are always right,” Miriam says), after nights sitting at Zippy’s brainstorming a menu, Miriam decided to take the leap, focusing on breakfasts. I would make my first visit to Barrio Café for this article. Miriam generously opened her doors on an off day and gave me a sampling of three menu items. 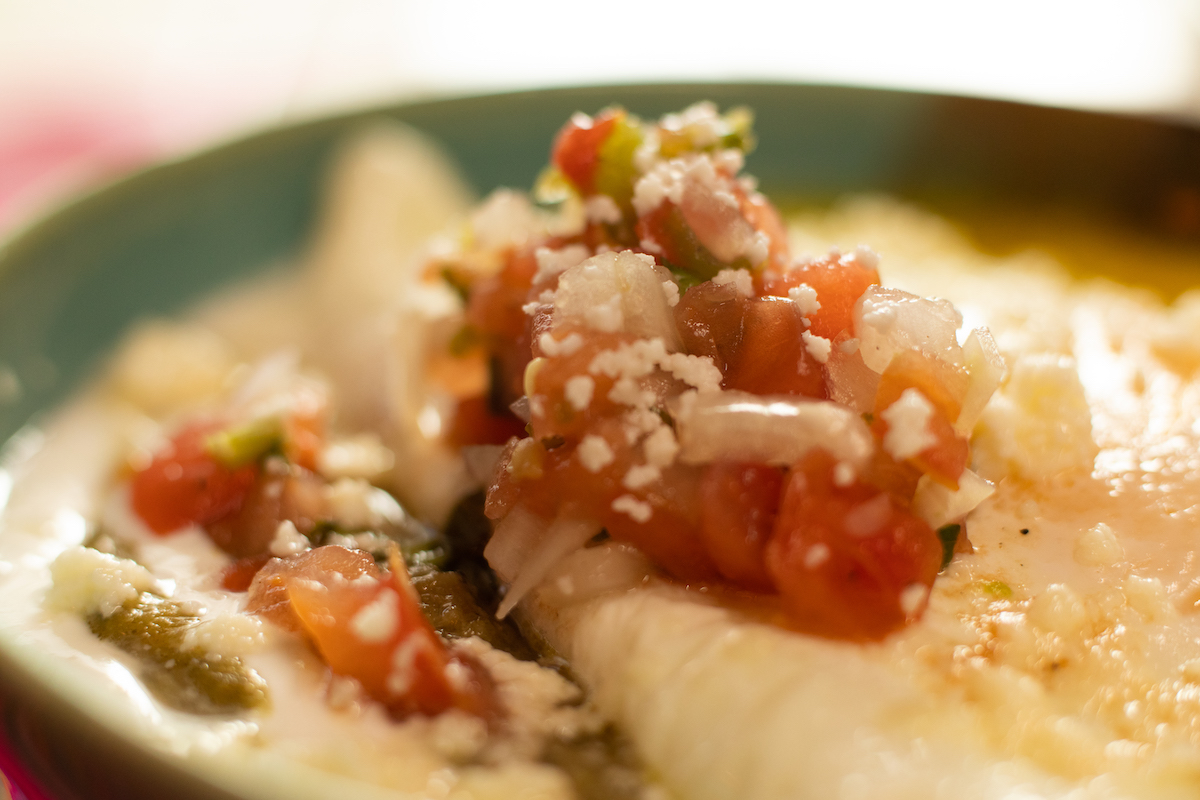 The Mexi-Loco Moco ($12) is made with her husband’s award-winning green chili over rice, with cream, pico de gallo, egg and queso fresco. The chili has a pleasant, warm spice, balanced by the cream. 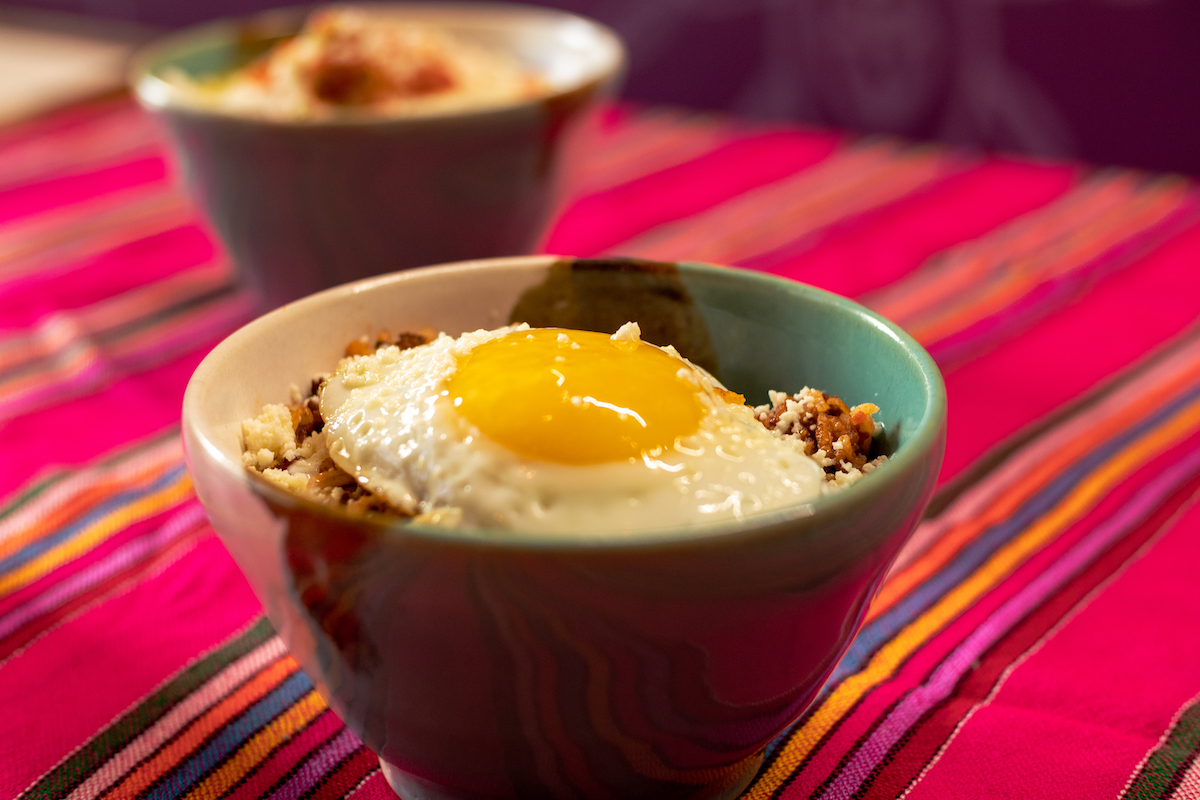 The chorizo rice ($12) is a take on local breakfast fried rice, except it’s so popular, they can’t use day-old rice to make it as is tradition—there’s never any left over. The chorizo, house-made and soon available for purchase, is lean, flavorful and not dripping with orange oil, like you may be accustomed to. 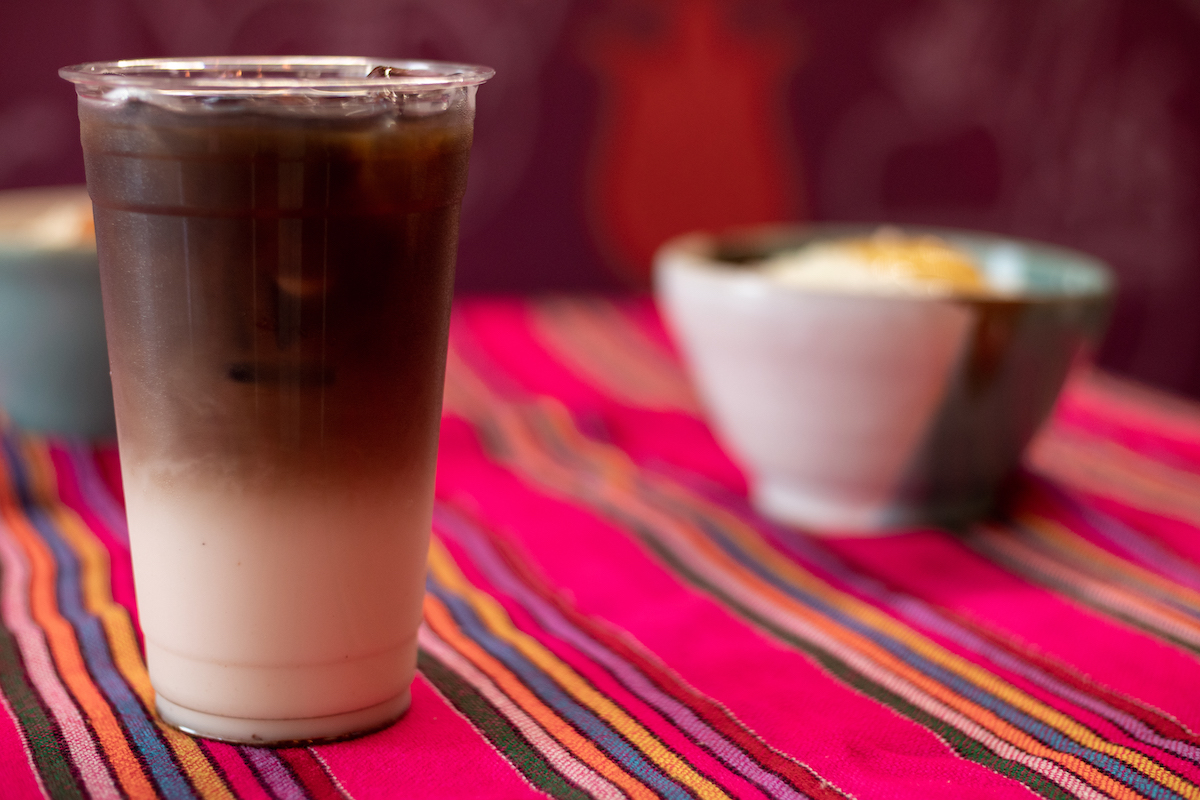 If you like horchata (I do), and you like coffee (I do), then you will really enjoy the horchata iced coffee ($5, and I did). The combination just makes sense.

Side note: Poni and Brandon Askew of Street Grindz, old friends of mine and the organizers of the Eat the Street food truck rallies, have a burgeoning vinegar shop next door to the left of Barrio Café. I recommend the mango. 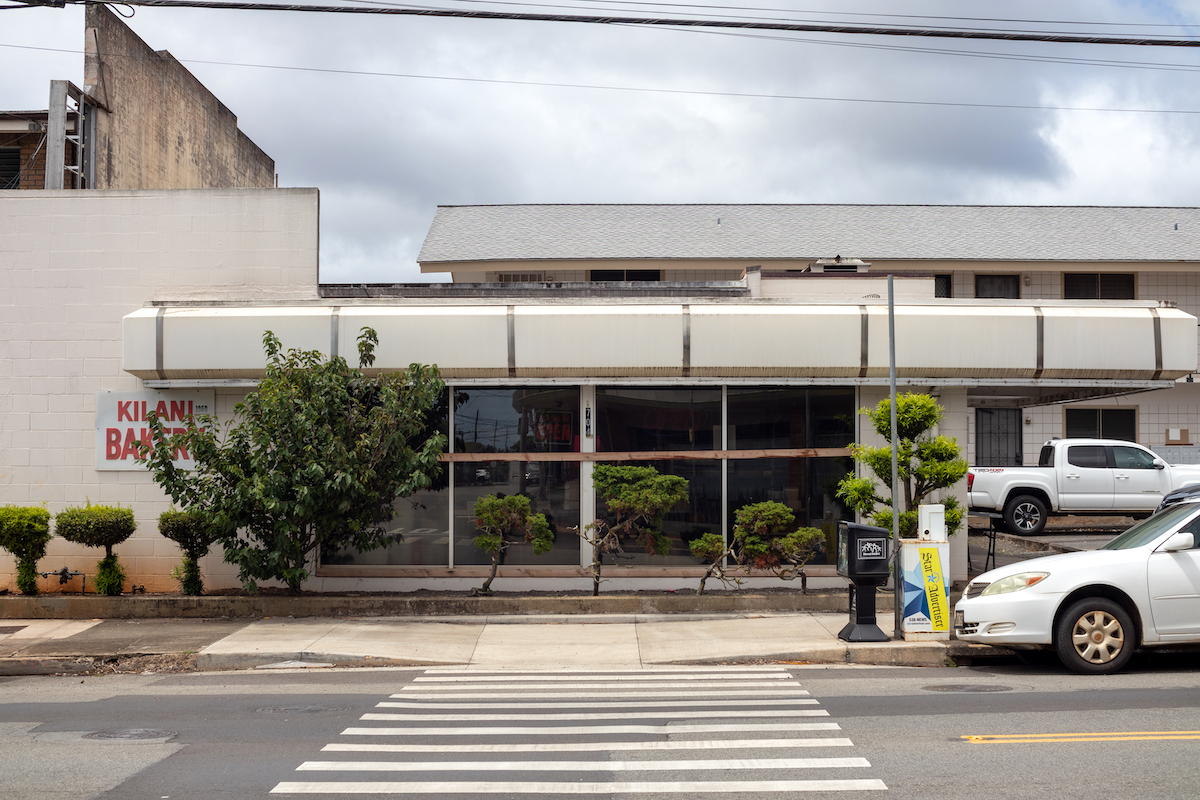 Next door and to the right of Barrio Café stands Kilani Bakery, the source of many of my life’s breakfasts and desserts. OK, some lunches and dinners too. If you know Kilani Bakery, then you know their brownies: tender, off-black sticks with chopped walnuts, blanketed in powdered sugar. But I grew up loving the stick donut ($1.65) and bread pudding ($1.65) the most. 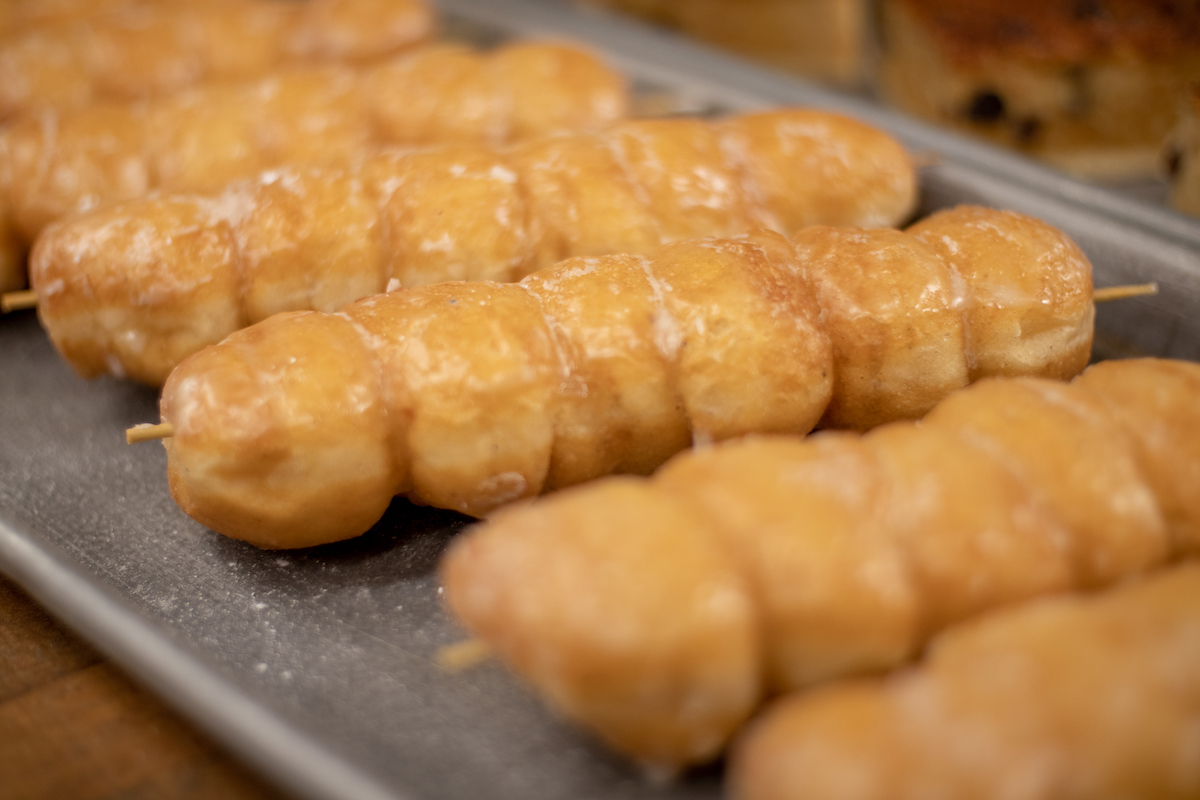 A stick donut is basically a donut hole shish kebab. If we’re being honest, I like to dip the whole thing in milk and eat it straight off the skewer like a monster. The bread pudding is a firm block of custard and raisins and nostalgia, and the lucky ones get the edge piece with the thick, crisp crust. 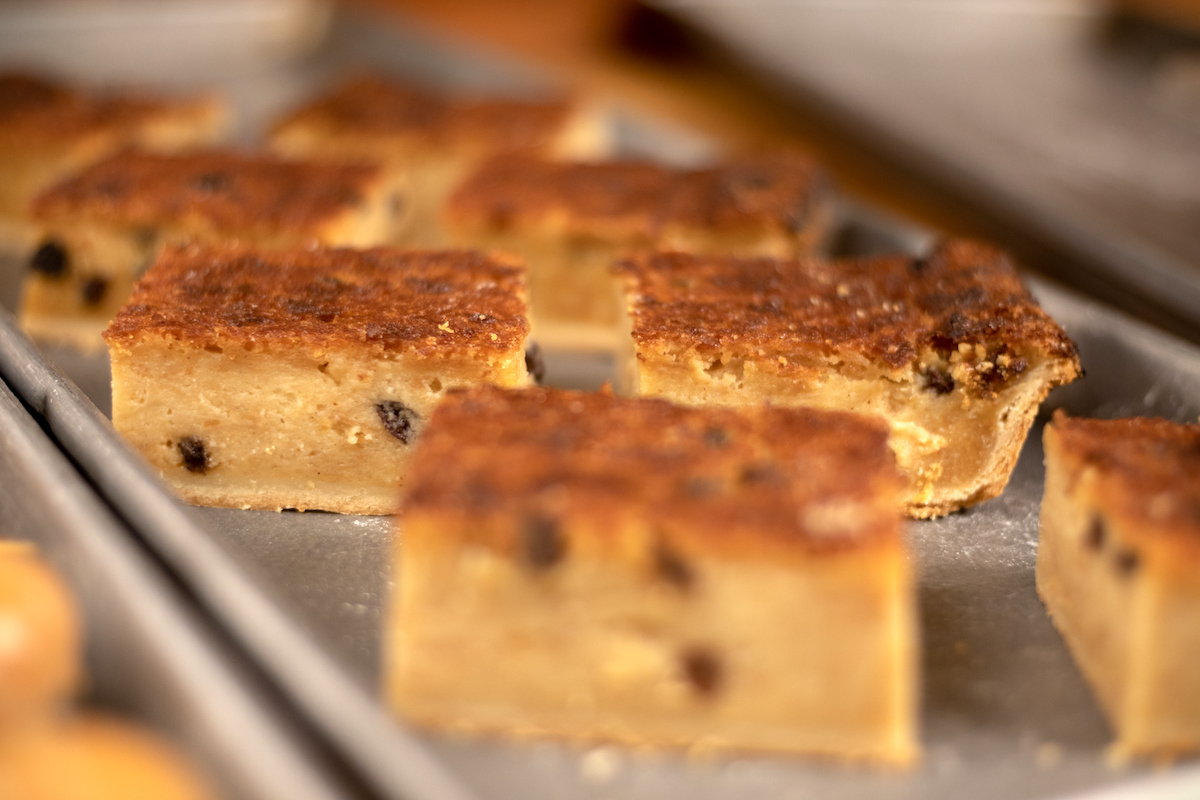 Walter Takara worked as a baker at 9th Avenue Bakery in Kaimukī, owned by Chosei Zukeran. There, he learned all the secrets of the trade and met his future wife—Chosei’s daughter, Beatrice. They would later move to Wahiawā, and on Aug. 16, 1959, Walter and Beatrice opened Kilani Bakery. Walter passed away in 2014 and Beatrice is retired, but their sons Sidney and Jeffery have taken over, with hopes that one day, Sidney’s children will take the reins. While the next generations may choose to take the bakery in a different direction, a decision was made to keep things old-school for the time being, keeping true to what they have been known for over the past six decades. So the menu has stayed more or less the same, using Walter’s recipes. 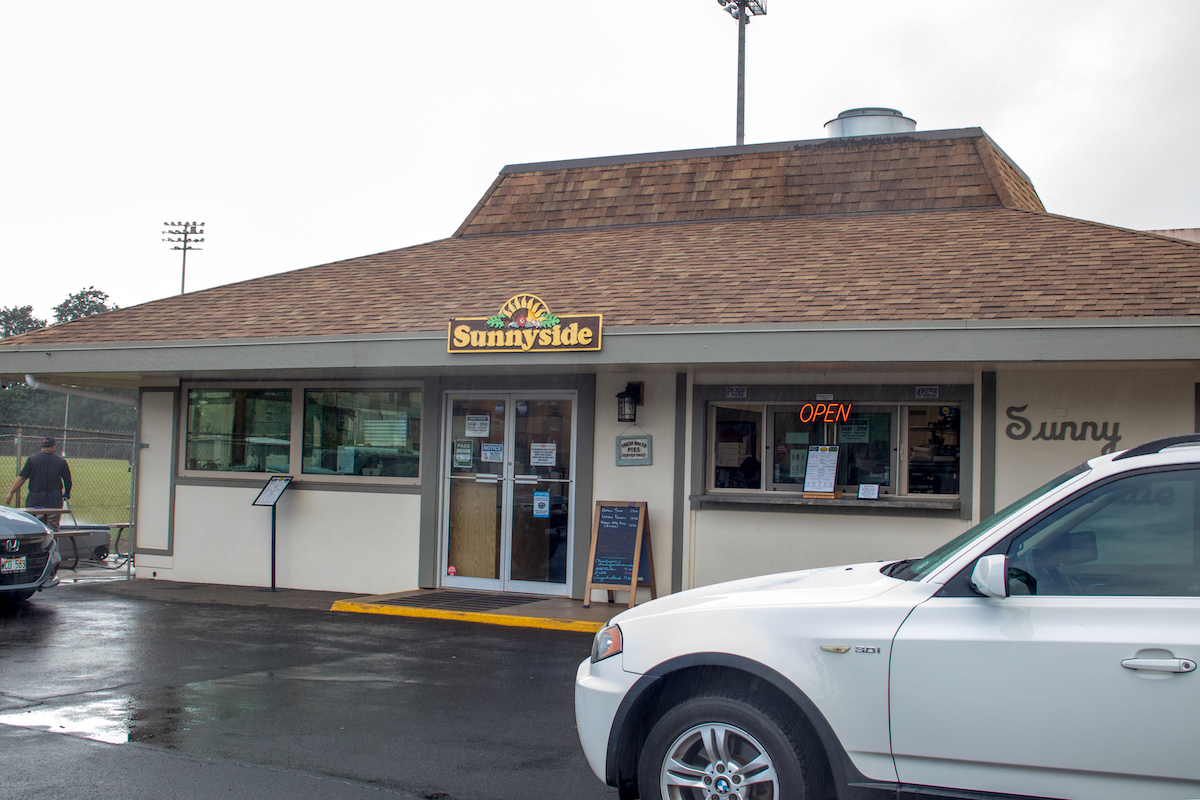 A few years ago, Sunnyside shut its doors. On their last day of operation, in an attempt to draw out the goodbye, I got one more double-crust banana pie and put it in the freezer. That lasted all of a few months, when it was hastily thawed out and eaten. Which reminds me—I gotta get cracking on that Kāne‘ohe Bakery pumpkin custard pie I have in there. Anyway, in 2020, when so many other businesses were closing for good, Sunnyside re-emerged, with a facelift and original pies in tow. 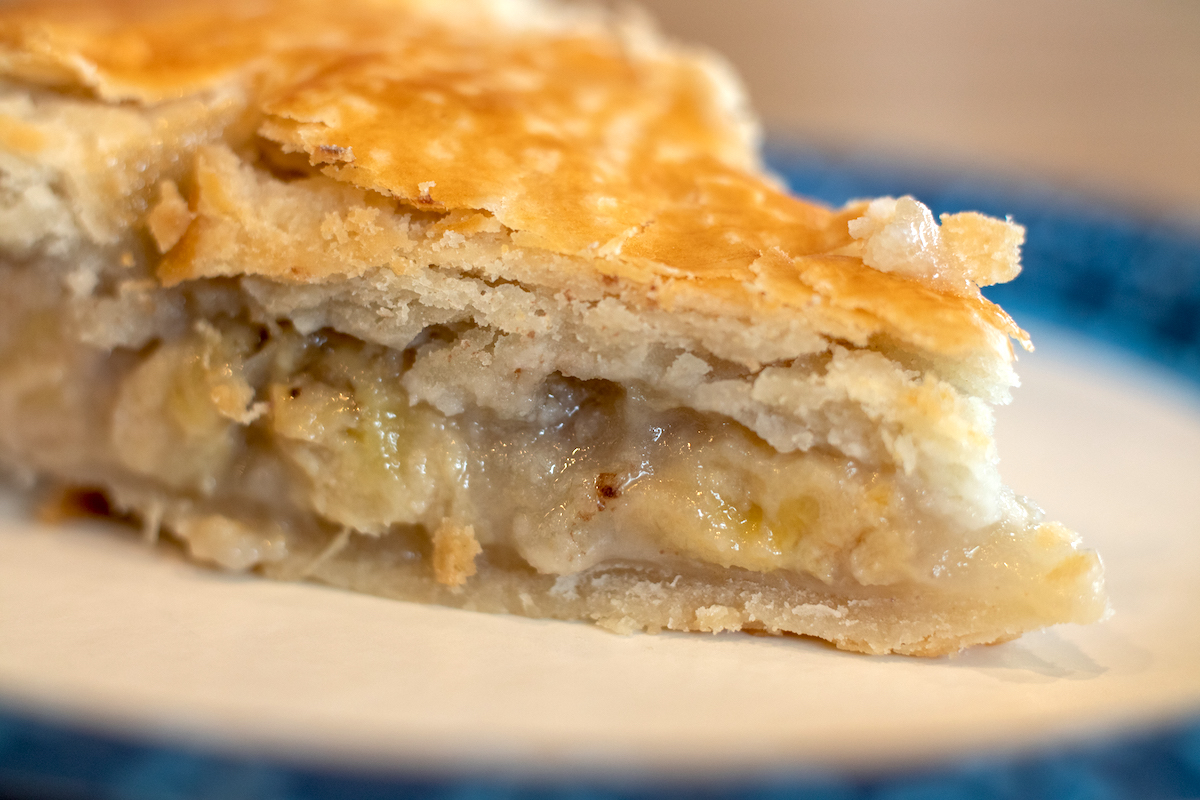 The interior is brand new and lively. Picture windows lined with succulents have replaced the jalousies. The old window to the kitchen is now a wide-open counter. Some things haven’t changed, though. The fried rice special ($8.50) with hot dog and egg over-easy is still the move. The double-crust banana pie ($3 a slice, $15 whole), buttery and dense with fruit, is still the best on the island (yeah, I said it). And if you’re eating in, you’re still responsible for bringing your plate and utensils up to the counter when you’re done—cleaning up after yourself, you know, like an adult. 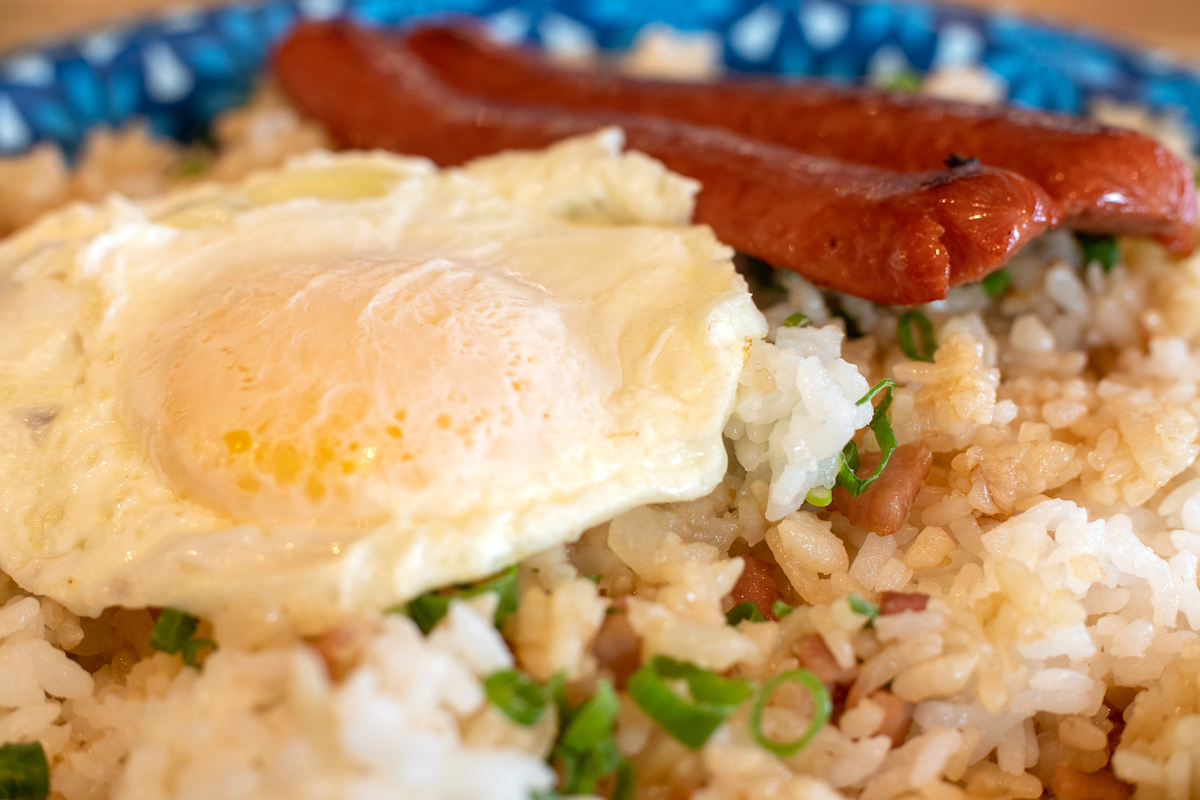 Wahiawā tends to get a bad rap. I get it. I was walking down the street when a woman on a bike yelled to a man riding his bike in the opposite direction, “Eh! You going to da game room?” But when I asked business owners what’s kept them going through the pandemic, every single one gave credit, without hesitation, to the community. That doesn’t happen in a bad town. Take a turn just before you cross the Karsten Thot Bridge and you’ll see. Even if I haven’t sold you on Kilani Avenue (more pies for me), do your local business owners a solid and get takeout from your favorite neighborhood place for dinner tonight. And maybe get your eggs from Peterson’s Upland Farm.