Cheers! Four beers pegged to scholarships for women brewers are coming to brewpubs near you.

You may know March 8 as International Women’s Day. For women brewers around the world, it was also the Pink Boots Society’s Collaboration Brew Day—which in Hawai‘i drew brewers, beer professionals and enthusiasts from as far away as the mainland to Kaka‘ako’s Hana Koa Brewing Co. and other breweries. Amid brewing demos and talks about beer styles and ingredients, new beers took shape—made by women, to raise money for scholarships for women studying to make great beer. Now these new beers are coming to brewpubs near you.

What is Collaboration Brew Day? Organized by the Pink Boots Society, 550 women-led teams around the world got together to network and make beer. This year each team received from Yakima Chief Hops a hop blend of Idaho Gem™, HBC 630, Talus™, Triumph, and Loral® varieties with expected aromas of citrus, sweet aromatics and berry. While all teams got the same blend, each new beer made with it will be unique, and no one knows how they will turn out until each beer actually starts pouring. Let’s take a look at what’s coming to taps around Hawai‘i. 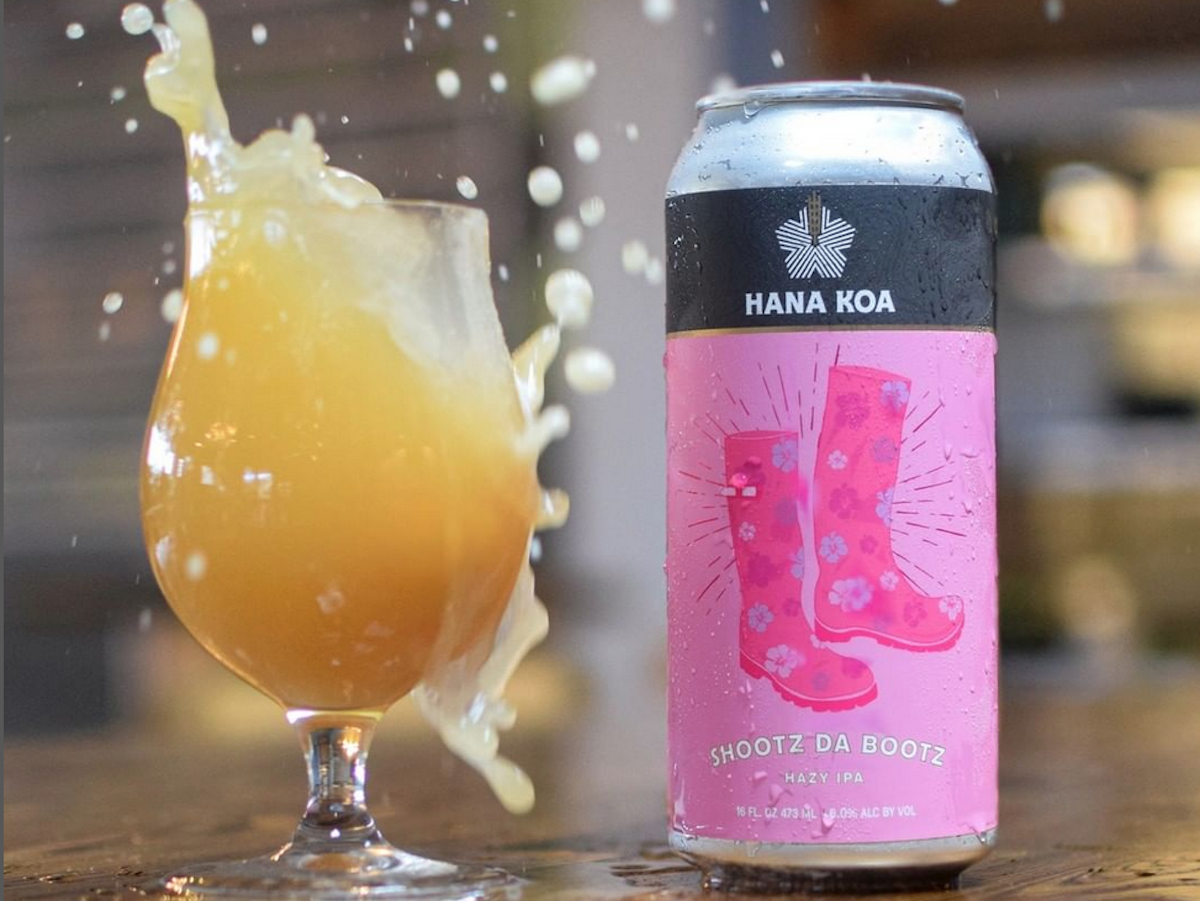 Hana Koa Brewing’s Shootz da Bootz! is a Hazy India Pale Ale, one of the most popular styles of beer today with often tropical, citrus or fruity flavor profiles and subdued bitterness. What gives them a hazy appearance is the addition of flaked oats and other non-barley adjuncts; these also produce a smoother mouthfeel than heavily carbonated beers. Many Hazy IPAs fall in a medium alcohol range of 6 to 9%, with Imperial or Double varieties coming in much higher.

Look for Shootz da Bootz! in cans and on draft starting April 1, and be sure to scan the QR code on the label to watch a behind-the-scenes video about the beer. Hana Koa will be one of only 35 breweries from around the world pouring at April’s Beers With(out) Beards Festival in Portland, Maine celebrating women in beer.

This year’s draft-only release is a Hoppy Tart Saison. To add an additional twist, Beerworks’ original Hoppy Tart Saison will be available on draft so you can taste it next to six experimental versions, each featuring different ingredients chosen during Brew Day. The event was pure collaboration, says brewpub manager Roxy Perez, “a hands-on learning experience where our staff [was] educated on brewing techniques and encouraged to ask and participate in the process as much as possible.”

Beerworks’ 2018 Pink Boots Society beer, Pussy Grabs Back, received such tremendous feedback that it became a year-round release statewide, both on draft and in cans. “Getting that support really made us feel like people in the community appreciated our efforts to raise awareness for women in beer-related careers,” Perez says.

SEE ALSO: The Best Beers Brewed in Hawai‘i in 2021

Roxayne Spruance, the local Pink Boots Society co-chair and lead brewer at Hana Koa, led Waikīkī Brewing Co. staffers on a Brew Day of their own. Their beer uses the same hop blend but will be an entirely different product—a Dry Hopped Saison with hibiscus named Pinky Swear. The beer will come in at 7.2% ABV and 45 IBU and will also be available at the Maui locations, which held a simultaneous Brew Day in Lahaina.

Available in a couple of weeks at all four Maui Brewing locations on Maui and O‘ahu, F.I.E.R.C.E (Females in Every Role Can Empower) is a hibiscus saison coming in at 9% ABV. “We wanted to support and highlight our new brewer, Sarah Perez, who is the co-founder of Lifting Lucy,” brewmaster Kim Brisson-Lutz explains, “supporting Black, Indigenous and all Women of Color (BIWOC) in beer industry events and educational opportunities.”

Buying these beers will support opportunities for women in the beer industry, so look for the Pink Boots Society logo and drink a few! Cheers to great beer doing great things.

What is the Pink Boots Society?

The Society is a nonprofit whose mission is “to assist, inspire, and encourage women and/or non-binary individuals in the fermented/alcoholic beverage profession through education.” It’s open to women and non-binary individuals who work at breweries, beer bars, distributors and supply companies. As with many groups, the pandemic’s lockdowns and stay-at-home orders were not kind to the Hawai‘i chapter, which lost members who moved on to other opportunities or locales. Unable to meet and brew together, the chapter was in danger of closing. Thankfully, that is all turning around. 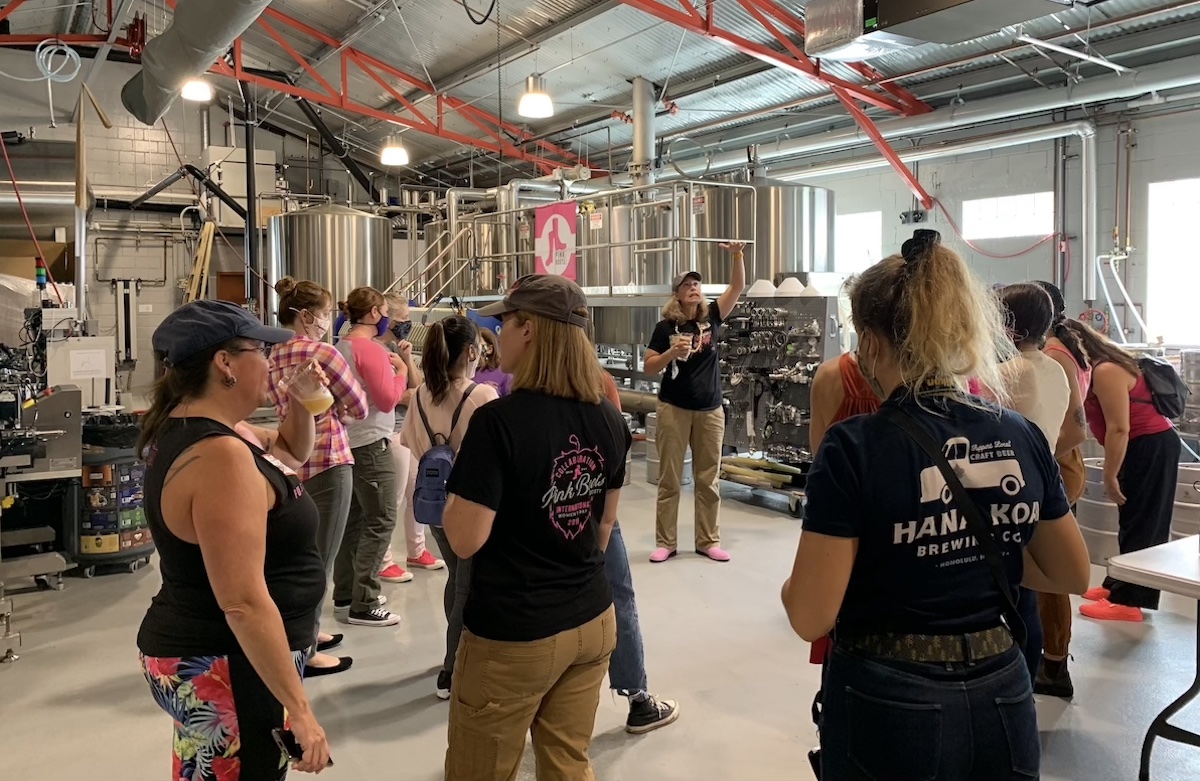 Spruance, a veteran of O‘ahu’s beer scene, leads the Pink Boots Society’s local chapter with Chrissie Pinney, Hana Koa’s owner and director of operations. Earlier in her career Spruance herself won a Pink Boots scholarship to study brewing science at the Siebel Institute of Technology. She continues to learn and teach newcomers in the industry.

If you’re interested, you’re welcome to get involved. All of these groups are open to new members: