This is Kalihi’s first beer brewery in 127 years

Broken Boundary Brewery is Kalihi’s first brewery since the closure of the Baltimore-based National Brewery Co. in 1893. It’s attached to Homebrew in Paradise, O‘ahu’s only homebrew supply store, founded in 1994 by Hawai‘i brewing pioneer Dave Campbell of Aloha Beer Co. In 2017 Bill Sumrow bought it with the goal of converting part of the building to a brewery with brewing partner Chris Cook. Three years later and in the midst of a pandemic, the brewery is finally open.

“We learned a translation of ‘Kalihi’ is ‘boundary,’ so not wanting to be pigeonholed in any one thing, we went with the concept of breaking down boundaries,” says Cook. The logo is a circle representing traditional styles, with three lines diverging outward symbolizing innovation.

During its limited opening under the stay-at-home orders, Broken Boundary offered beer to-go in crowlers and growlers. Its focus has been “mostly traditional to start, no gimmicks,” says Sumrow. But Cook and Sumrow plan on experimenting with trusted styles. In their research, the business partners tasted classic examples of specific styles from Village Bottle Shop & Tasting Room in Kaka‘ako to understand flavor and balance. “It’s difficult for a brewery to be a trendsetter. We would be crazy not to make a Hazy IPA or other popular styles because it’s what people buy, but we also don’t want to bend to every change in the market,” says Sumrow about balancing what customers want with what the owners want to brew.

The traditional styles include Sucker Punch West Coast IPA, a clean, piney and hoppy beer; Carry Your Own Bags Porter, a dark beer that showcases its roasted malt; and On Common Ground Kölsch, a light and easy drinking German style to enjoy while talking to friends. Among the experimental: The Ginger Ginger Red Ale, made with two kinds of ginger from De La Mesa Farms in Waimānalo. “Hawai‘i has lots of local fruits, and as a brewery, we should own Tropical IPAs,” says Cook. The Jean Claude Van Blonde is a must try: At 7.2% ABV, it packs a punch but the flavor focuses on Pilsner malt over bitterness or strong hops. The large building offers lots of open space for experimentation and aging—look for a beer inspired by bread pudding soon. 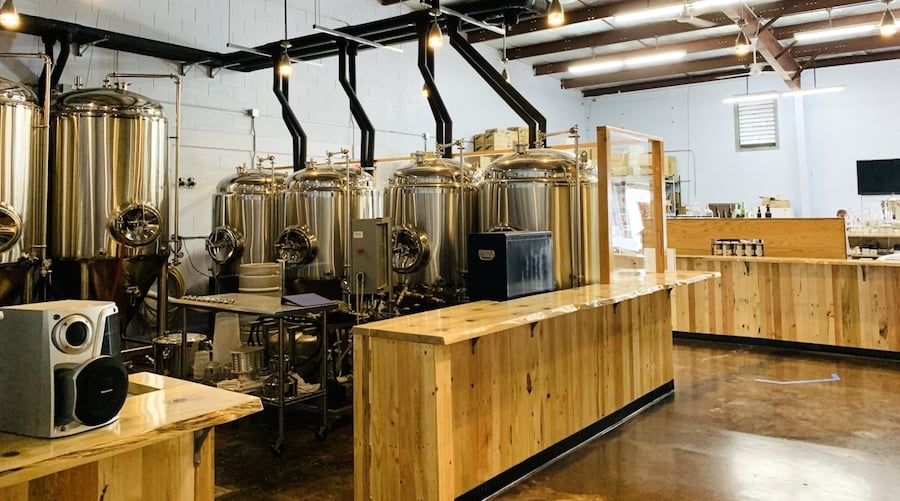 The brewery is on Mo‘owa‘a Street behind Dillingham Plaza. There are limited parking stalls next to the building, as well as free street parking in the neighborhood. The interior maintains an industrial vibe: Old metal stools have been given new life by auto painters in the neighborhood, and no matter where you sit, you’re among the ingredients and brewing equipment that made the beer in your hand reality. While for now it’s about as casual as a hangout in a garage, with plastic tables and folding chairs, the hope is for the brewery to be a community hub and event center during the day and pau hana space in the evenings and weekends. Food trucks such as ReecieB’s Onolicious Local Food are slinging heavy pūpū like tempura, pork belly, and chicken wings on Fridays and Saturdays from 5 to 8:30 p.m.—check Broken Boundary’s social media for availability.

Broken Boundary Brewery is open for takeout (all crowlers $13) and drink-in (4-ounce sample size $2; 16-ounce full size $7) Tuesdays to Fridays from noon to 9 p.m. and Saturdays and Sundays from 5 to 9 p.m. Also, look for Broken Boundary’s beer on tap at Grace in Growlers in Kailua and other bars around the island soon.