Our World of Beer Brewed Here in Hawai‘i series continues with a look at who’ll have Irish Stouts, Irish Red Ales and more.

The world of beer is diverse and exciting. Far beyond just fizzy bitter liquid, there is a wide range of tastes, colors and ingredients. Unique beer styles developed due to geographic limitations, water chemistry and availability of grain and hops. Hawai‘i’s remoteness poses extra challenges for brewers in added shipping costs and freshness of ingredients that cannot be grown locally. This series is an introduction to the rainbow of flavors out there and where you can buy local examples to enjoy.

Saint Patrick’s Day conjures images of shamrocks, hearty food—and of course, beer. While light varieties like Harp Lager lend themselves to being colored green for the holiday, it’s usually celebrated with darker fare including the ubiquitous Guinness Draught. As luck would have it, many local breweries take a spin into traditional Irish beer styles around this time.

The Beer Judge Certification Program offers a few Irish beer styles that pair well with corned beef and cabbage and bangers and mash. Arguably the most famous, Irish Stouts (or Dry Irish Stouts) may look dark and formidable, but are on the low side for alcohol content at only around 4-5%. The BJCP describes this style as a “black beer with a pronounced roasted flavor similar to coffee, balanced with a malty sweetness and often dry.” Irish Stouts are sometimes served “on nitro” instead of carbon dioxide, as are most bubbly beers—the nitrogen makes the body creamy and smooth.

Two related styles are the Irish Extra Stout and Foreign Extra Stout, both developed with higher alcohol to help the beer survive shipping and the often hotter temperatures (like tropical islands) of their final destinations. At 5.5-6.5% and 6.3-8% ABV, respectively, these styles are more heavily hopped and offer more bang for your buck, depending on how much of your celebration you’d like to remember. Guinness Draught dates to the early 1800s; the recipe we know today launched in 1959. In the early 1990s Guinness helped develop a way to serve a nitro pour from a can using a widget that activates on opening.

SEE ALSO: The Best Beers Brewed in Hawai‘i in 2021

Another famous style often associated with Ireland is the Irish Red Ale, with familiarnames like Kilkenny and Smithwick’s. These are an Irish take on English Bitter styles with less hopping and more roast to add the red color and dryness; they range from 3.8-5% ABV. The BJCP describes these as “easy-drinking, often with subtle flavors, slightly malty in balance with hints of toffee/caramel, and a roasted dryness in the finish.”

At Irish pubs like Murphy’s or Kelley O’Neil’s, ask your bartender to pour you a Black & Tan. With a light base beer (like a lager or Irish red) taking up the bottom of the glass, an Irish stout is carefully poured on top without mixing the two. The drinking experience is a combination of the soft and roasted stout with the bite of carbonated bubbles.

You may already be familiar with classics brewed at St. James’s Gate in Dublin, but if you want to down something creamy and rich while supporting our independent local breweries, give these a try: 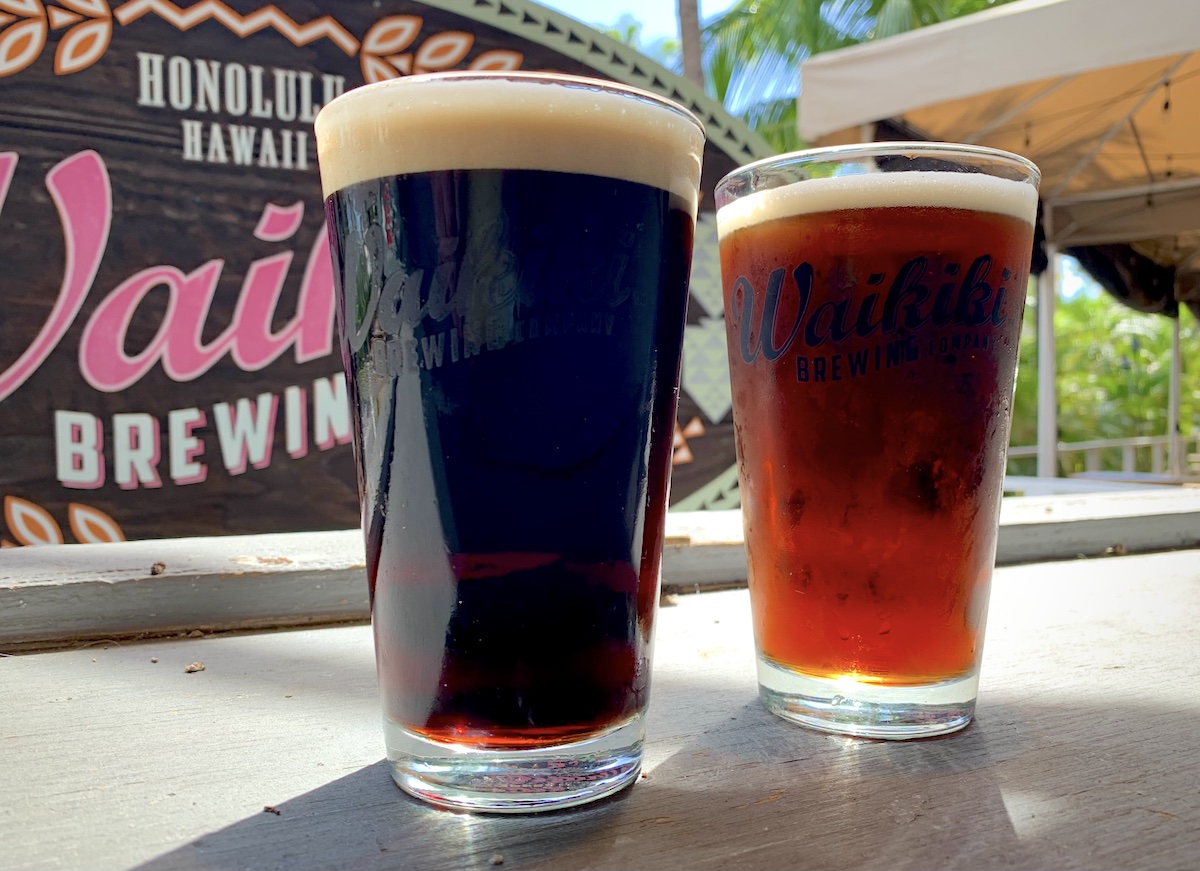 How’s this for convenience? Try both styles at one place! Waikiki Brewing is releasing two beers—one stout and one red ale—on St. Patrick’s Day at all four locations. The Paddy’s Dry Irish Stout (on nitro) is making a comeback from years past, while the Flartey’s Irish Red (named for the brewery’s O‘ahu general manager Andy Flartey) is an all-new recipe. The drafts are $7. As a bonus, ask for Craft Light colored green for the occasion! 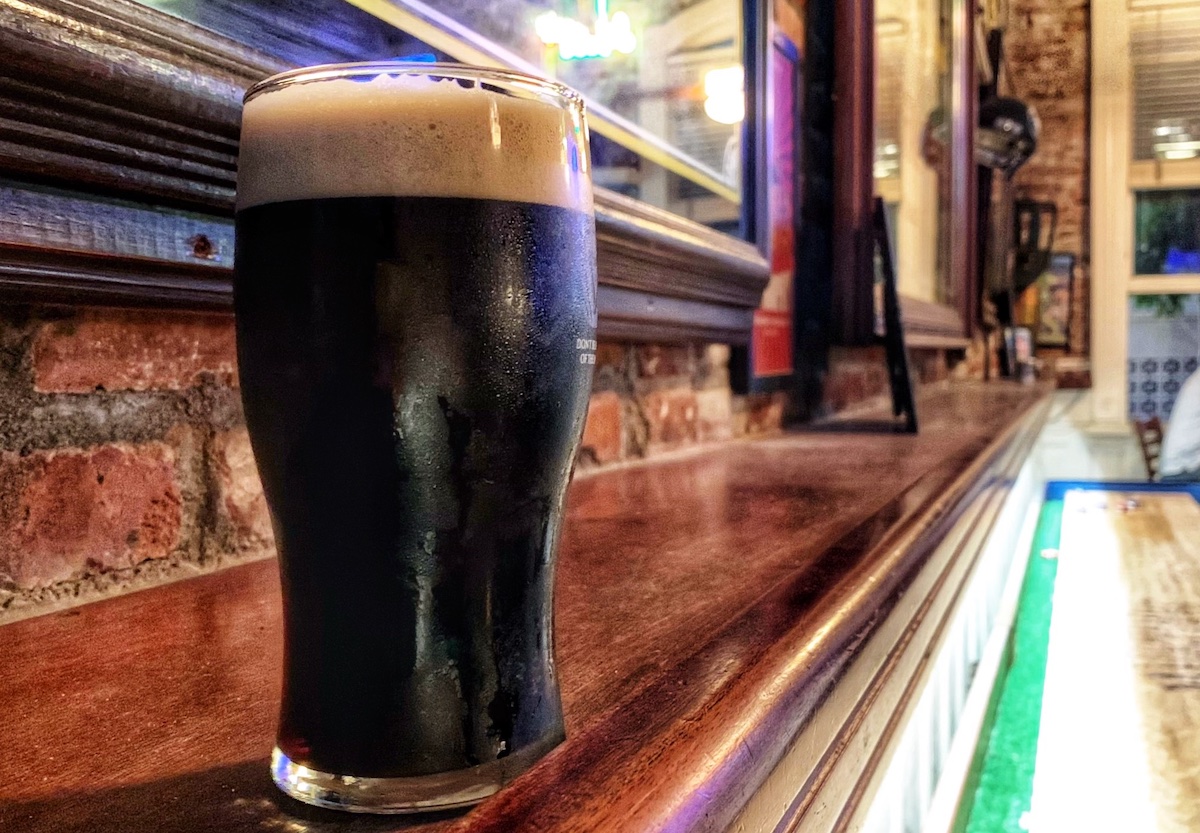 For the second year, the brewery is pouring their take on the classic and you even may find it on draught at Murphy’s and other pubs in town. As the brewery describes it, “over yonder far seas, rolling green hills of magic gave us a wonderful pint of the ‘black stuff.’ Grinness pays tribute to the style boasting notes of dark chocolate, American white oak, and lightly roasted coffee.” This beer is often served on nitro, so it is best to enjoy it while out with friends. On nitro at the brewery, available in 5-ounce ($3.25), 10-ounce ($4.75) and 16-ounce ($8) pours.

Releasing for another year, Broken Boundary’s Ginger Ginger Red Ale offering is unique in that it uses two types of locally grown ginger to add an earthy zing. This year’s will have two new types: white ginger and red Olena. Get it on draft releasing a day or two before the holiday or find it in 4-pack cans for the first time ($20). 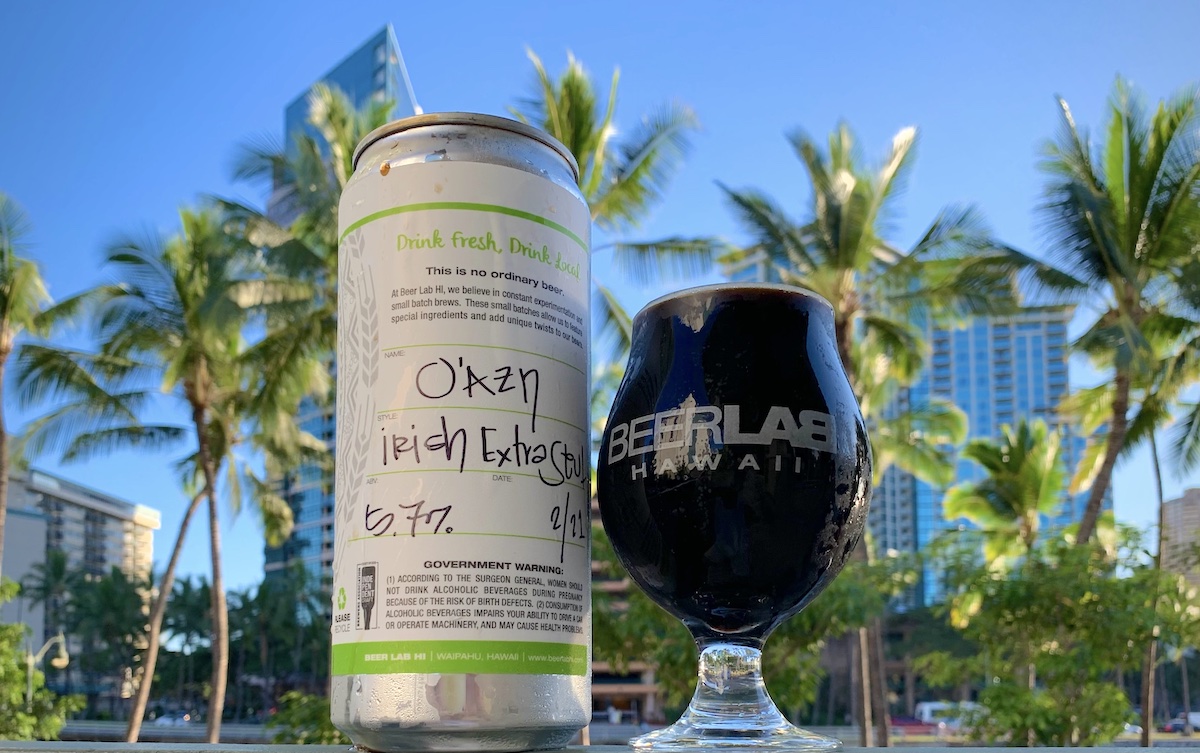 This Irish Extra Stout is the brainchild of homebrewer Kai McKillop, who recently won the Master of Malt Homebrew Competition with this recipe. What makes it special is the addition of Irish Cream boba. Get it while it lasts at Beer Lab’s three locations in growlers to go ($16) and on draft in sample size ($2.75) or full pours ($7.75).

As this is not an exhaustive list of Irish styles and St. Patrick’s Day beers brewed in Hawai‘i, ask for them at your favorite beer store or brewery on your next visit. Sláinte!