Adult children now help their parents run some of Chinatown’s most long-standing and beloved food businesses.

Entrepreneurialism runs in his family. In addition to buying Chun’s and the building that houses it, one of Frankie’s aunts owned Regal Diner and Regal Bakery (now both closed), and Frankie’s father and his siblings collectively own Jolene’s Hawai‘i. When they had moved from Zhongshan to Hawai‘i in 1981, seven of them crammed into a garage in Kalihi. “They worked from 4 a.m. to midnight, until they had money saved to start a business,” Frankie says. Even now, he says, his family can’t stop saving. “Sometimes they don’t want to give extra fork, they don’t want to give extra sauce. [I tell them], we’re not gonna lose money from just giving an extra something. I just want the customers to be happy and comfortable and have a good experience. If they need 10 forks or five—well, 10 forks is actually too much—but five, OK. But I need to still teach my uncle to not always have to save every penny.”

“I knew that  anything I was  going to pursue  wasn’t going  to  be long, because  the family would always ask us back for help.” 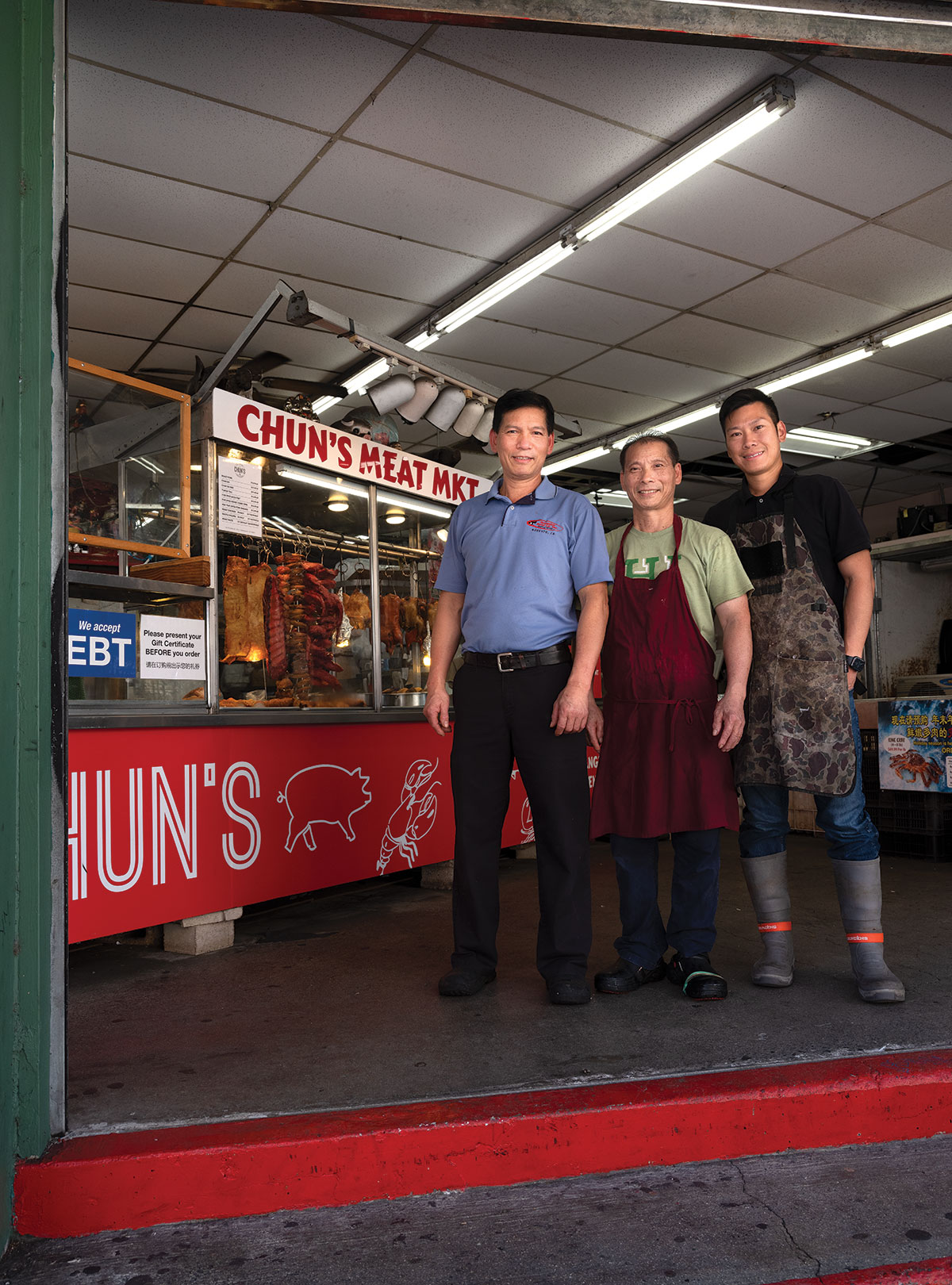 Frankie, along with his cousins, worked in the family businesses since the sixth grade. “The good part is that we learned to socialize early in life. There were just three of us young boys running the front of the house taking orders. The con was it distracted us from pursuing what we wanted to do, whether it was being a teacher or doctor, whatever it was.” Frankie went to Kapi‘olani Community College and graduated with an associate degree “because I knew that anything I was going to pursue wasn’t going to be long, because the family would always ask us back for help.” By 2013, “I was fully submerged in Chun’s. I jumped right in and from there I never looked back.”

Almost a decade later, he has learned the ropes well enough that his father, uncles and aunts recently took their first vacation in more than 40 years, leaving the second generation—Frankie, his brother Bobby and cousin Nathan—to run the shop. Nervous, his father advised him to scale down the inventory while they were away. But Frankie ignored him. His parents returned and “found out we ran it just as if they were here,” he says. “So it gives [my dad] the feeling that he can actually retire.”

Managing Chun’s without his father and uncle “gave me even more confidence that hey, I can do this … I’m pretty much the front-runner to lead the next generation to the next 10, 20, 30 years. And my favorite part is, I love dealing with the customers. Customers, they love to challenge you. I look young in this business, but I’m full of experience. I love it when they challenge me that I don’t know what I’m doing because I actually do. I’m the one that actually broke down all the pig parts that are in the refrigerator ready to sell. Doing that made me realize that I’m capable of doing more than I thought I could ever do.”

But despite the confidence gained by both the first and second generations, Frankie says it’s still a challenge convincing his elders to change. Right now, for instance, most transactions at Chun’s are recorded with pen and paper. “I want to modernize, have more computers. I want to upgrade some equipment because some stuff is kind of old, like our showcase. I want to renovate so customers can be like, ‘wow, this place is doing well,’ and also to give them a good experience.

“Chun’s is still busy but people are saying it’s not as busy as before because a lot of places have opened up outside Chinatown, with ample parking, and where it’s safer. I want to one day be able to bring in security just to give my customers confidence that Chinatown is safe. Those are stuff in the future, maybe five to 10 years from now.”

Customers and family are a recurring theme for Frankie. He’s currently trying to bring his sister, an accountant, into the fold. “This is a family business, and we should all work together. And hopefully, the next generation—I’m not going to make them—but my goal is to make it easier for them to take over if they choose to. I want my kids to have a shot at it.” 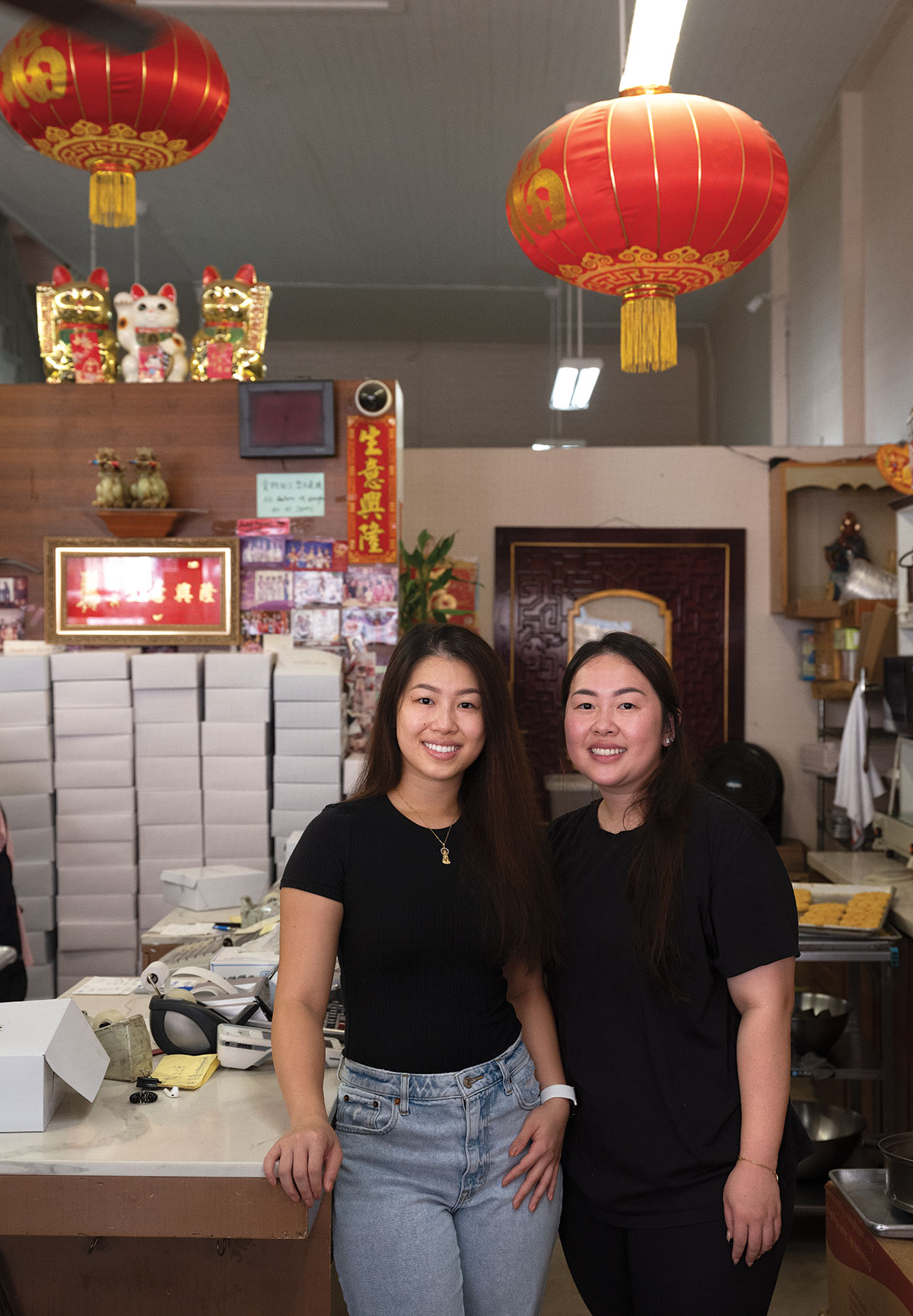 In 2008, Liana Fang’s parents, Wesley and Jie Mei Fang, originally from Guangdong, China, took over a 40-year-old bakery and renamed it Sing Cheong Yuan. They expanded the dim sum and crack seed offerings and added new items like mochi mooncakes. Everything in the bakery case, from the har gow to the manapua to the pineapple cakes, is made in-house, based on family recipes and those that Liana’s mom created and evolved over time. Though Liana, 27, can help with the baking production, she hates its exactitude. Rather, she loves cooking— “I cook employee lunches,” she says—and she loves Chinatown. “It’s so authentic. I love Asian food, the fresh markets, the mom and pop shops.” She helps manage the bakery, from serving customers to buying supplies, and thinks it could use a remodel, but her mom is ultimately the boss. “She’s old school, and she still likes it how it is now.”

A few years ago, Jie Mei purchased the Kaimukī Crack Seed Store after the previous owner retired, and has kept it basically the same. It’s understood that Liana will take over the businesses when her mom retires, but that’s still a long way away. “I love working with my mom and family, and I hope everybody lives forever,” she says. “Honestly, I don’t know how I’m gonna do it without my mom.”

Chinese grocery stores pepper Chinatown, but none seem to straddle demographics like Sun Chong Grocery. It’s not so much a bridge, but more like a store with a split personality. There’s the Sun Chong on Instagram that also pops up at Nordstrom, marketing technicolor lemon peel candies and crack seed and bright seasonal fruit—mangoes, mangosteen and its famous Hilo Kaimana lychees. Then there’s the physical store on Hotel Street, where bins and boxes overflow with poufs of snow fungus, sheafs of dried squid, and resiny nuggets of peach sap, and shelves are crammed with Chinese teas, po chai pills and other Chinese medicines.

“For the most part, it’s an organized mess,” says Louisa Sung, 33, whose mom, Ann Sung, and aunt, Shirley Ing, own the store. Louisa has a hard time editing down what to bring to the pop-ups at Nordstrom. Recently, for the Mid-Autumn Festival, she brought mooncakes and teas, and the department store also requested gummies and Kona King mangoes. “Every time I think of my layout, I’m like, does this even make sense? Mooncakes, teas, gummies, mangoes?”

“Just like any other small business, my cousins and my sisters and I grew up in the shop.” 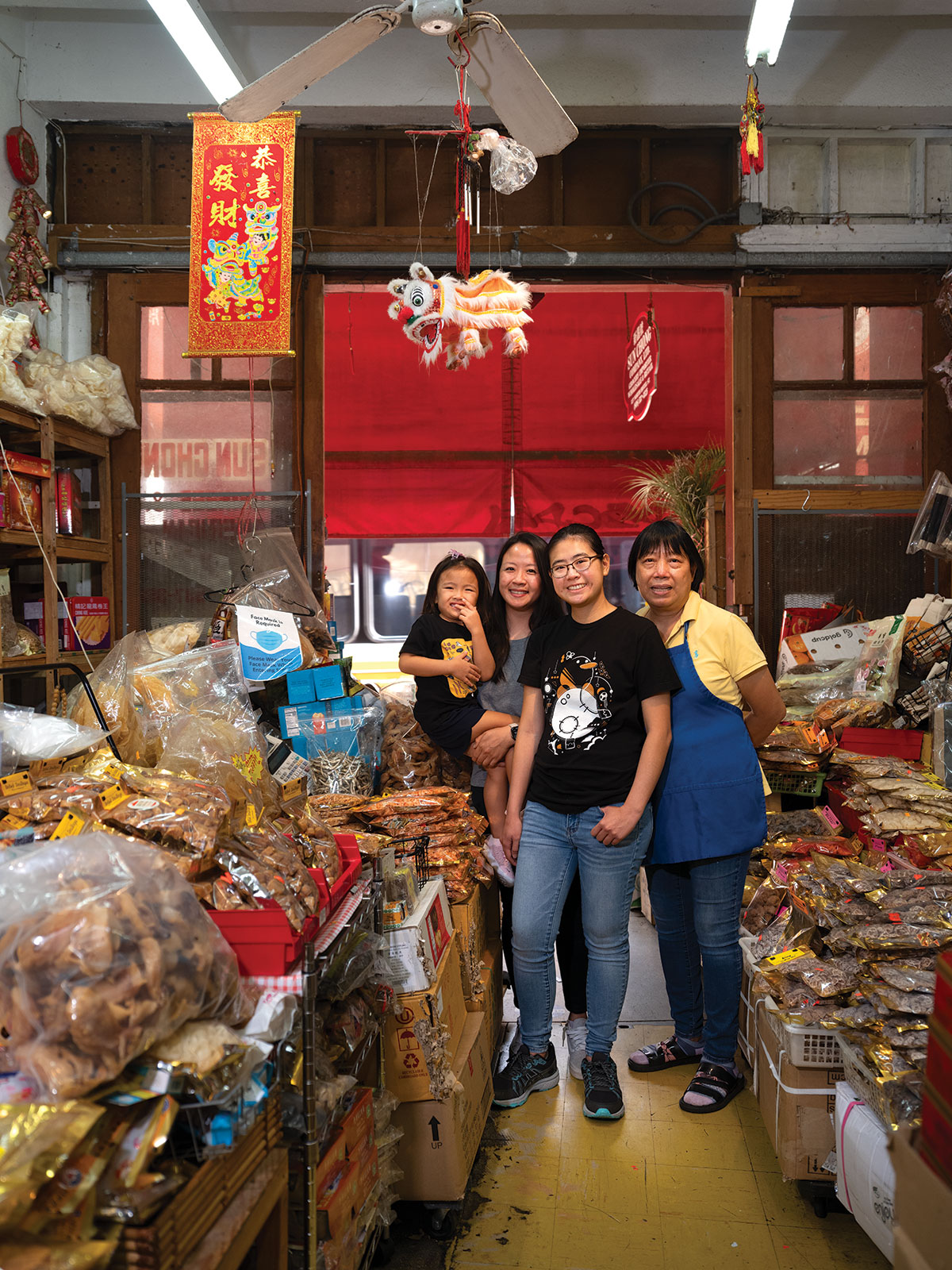 But what makes sense anymore? Sung remembers when Sun Chong used to sell a lot of oyster sauce. But now that Costco carries it, “we don’t even remember to order oyster sauce. The price just can’t compare to Costco.” After a recent Chinatown shooting, the shop was quiet for two weeks as people avoided the neighborhood, likely shopping instead at H Mart or other stores outside the neighborhood for their Asian food supplies. “Whenever there’s bad news, it affects our business,” she says. At least for jai, “all those ingredients you wouldn’t be able to find anywhere else. So we’re not worried about that. But it used to be your grandma would make it and then they would deliver to all the family and cousins. We don’t know if the younger generation would be willing to do things like that because we’re all so busy.”

Throughout our conversation, she returns to jai, as if it’s a thread that can hold generations together. Her mom and aunt took over Sun Chong Grocery in 1983 from their uncle who started it a few years prior. They had come from Zhongshan, China, to join their father—their mother had passed away on the journey to Hawai‘i.

“Just like any other small business, my cousins and my sisters and I grew up in the shop,” Louisa says. “We came to every Chinese New Year parade and worked summers.” She went to college in San Francisco and studied business. “I wanted to maybe try a real 9-to-5 career. But Hawai‘i is always home. And my mom has done a lot for me to send me to college and everything.” Returning to the family business felt like repaying her mother, she says. “But of course I enjoy the customers, and being able to continue the culture in our family. Something simple like making jai: I hear customers’ recipes and share ours. I think it makes it fun for them to come back every year. And everybody brings their kids and their grandkids. Every year we see another generation come in, and they want to learn how Popo makes this or how Popo makes that.”

The bilingualism of Louisa, her mother and her aunt is one of Sun Chong’s greatest assets—they’re able to help Chinese speakers navigate English labels, and English speakers who need help with ingredients for a Chinese recipe on YouTube. While Louisa handles Sun Chong’s Instagram account, her mom grows a Chinese-speaking community on WeChat, posting store products along with pictures of her flowers at home. “They say good morning to each other there,” Louisa says. It’s essentially a 339-member (and counting) group chat, which is “cute, but I turned it off. I don’t know how you listen to those alerts at all hours of the day.”

The pandemic precipitated Sun Chong’s social media accounts as well as its first website, and Louisa has ideas for more changes. But she faces the “same issue everyone has, things like old versus young.” Her mom and aunt, she says, aren’t ready for big change. She wants to renovate and reorganize, make the store not trendy exactly, but a touch more modern. “Just making it easier and more accessible, like if people want to try to recreate Popo’s recipe, we’d be the first place they think of to look for those ingredients. Good ingredients. I want to be able to keep that family grocery store vibe alive for the community.”

Sprucing Up the Neighborhood Around ‘A‘ala Park

A New Mini Koreatown in Downtown