Although we may not get crisp fall weather in Hawai‘i, we do get our share of ghost stories. Over the years, the HONOLULU team has shared the spooky scoop on a variety of hotspots for the supernatural. So in the spirit of the upcoming Halloween season, we’re rounding up our favorite ghost stories, legends and first-hand accounts of paranormal activity from all across O‘ahu. 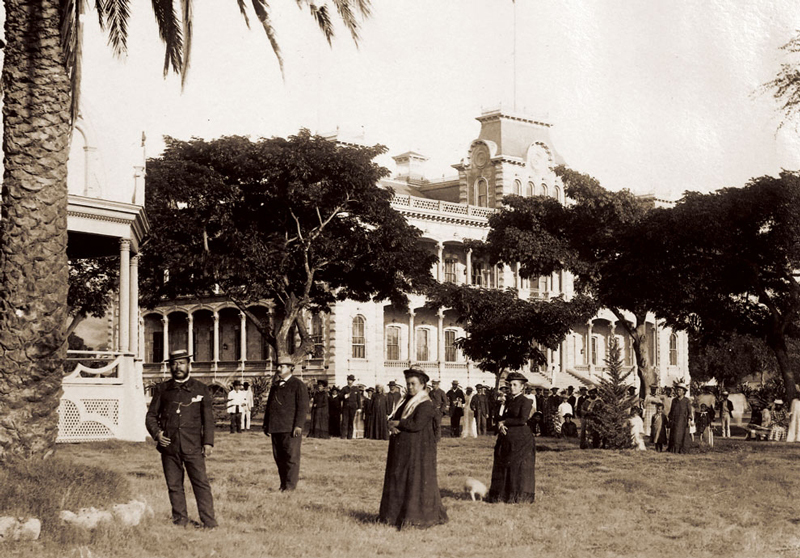 Security guards report seeing Queen Lili‘uokalani around 5:30 a.m., and hearing the piano playing in the Blue Room when no one (living) is actually in there. In 2006, Lopaka Kapanui, storyteller and founder of Mysteries of Hawai‘i ghost tours, was taking a group on one of his guided ghost tours in Downtown Honolulu and claims to have seen the silhouette of a Hawaiian woman in the second-floor bedroom window, where Lili‘uokalani was imprisoned. Her ghost, perhaps? “Trick of the light? My imagination? I can’t really say,” Kapanui says. “It was there—it did happen.” It seems the home of Hawai‘i’s last reigning monarchs may be housing more than just history and artifacts. Read more 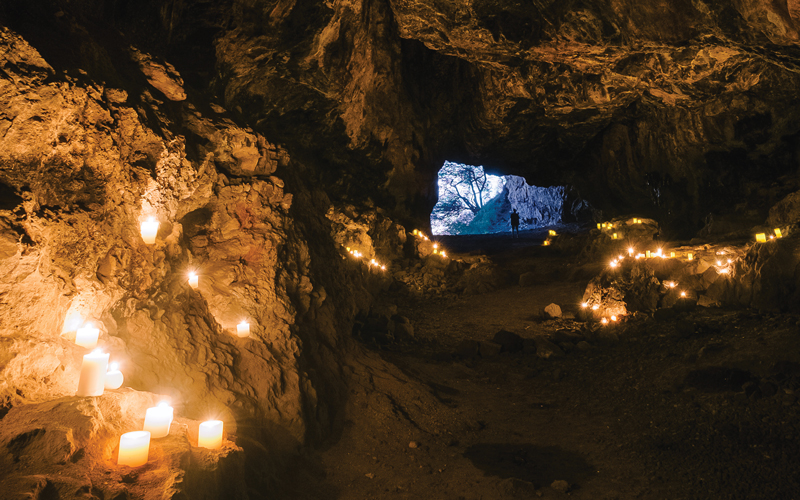 According to the Hawaiian legend, Kaneana Cave is home to the underground shark God Nanaue, the son of Kamohoali‘i or King of Sharks, the most sacred brother of the fire goddess Pele. Nanaue had an appetite for human flesh and disguised himself as a man to trick humans. It’s said that weary travelers visiting Mākua Cave at night are sometimes invited to join an old, wrinkled Hawaiian man tending to meat sizzling over a fire. As soon as the tired traveler becomes lethargic from eating the meat, the old man transforms into a shark. Nanaue kills the traveler and leaves the body to rot for three weeks, before consuming the meat. ​Mākua Cave is supposedly an active hotspot for the spirits of those who died there. This haunted Wai‘anae site has become a repository for psychic energy, says storyteller Lopaka Kapanui. 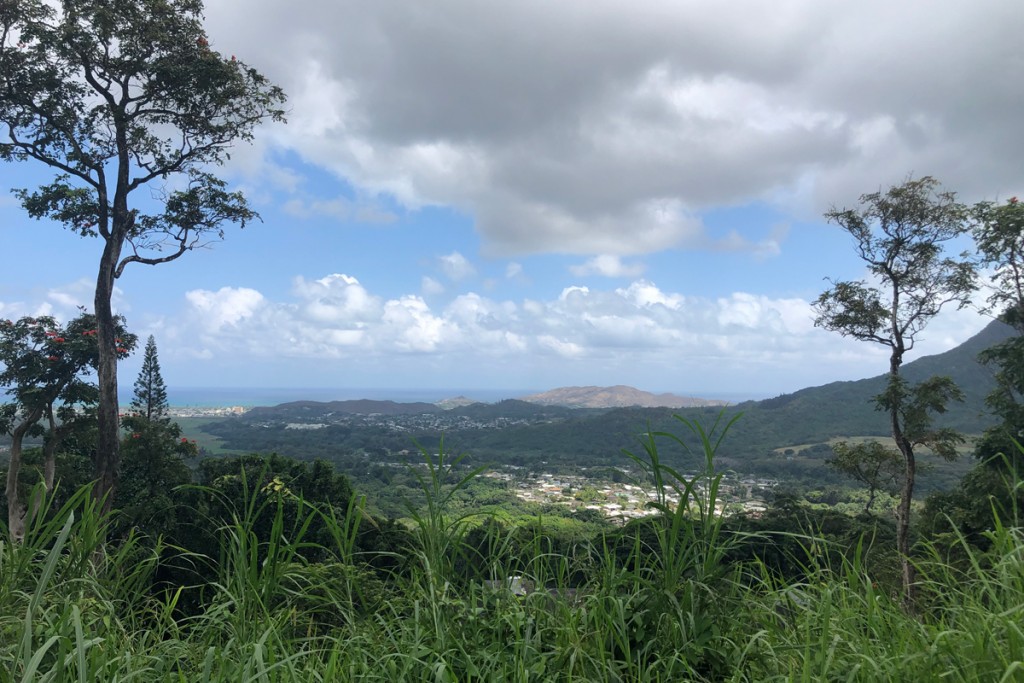 This scenic spot may showcase stunning views of the Ko‘olau Mountain Range and Pacific Ocean during the daytime, but when the sun goes down, stunning turns to down-right spooky. After all, hauntings supposedly occur more in places where people have died, and the Pali Lookout is where one of the bloodiest battles in Hawai‘i’s history occurred. So it should come as no surprise that there have been many ghost sightings surrounding an area where approximately 400 warriors perished. Read more 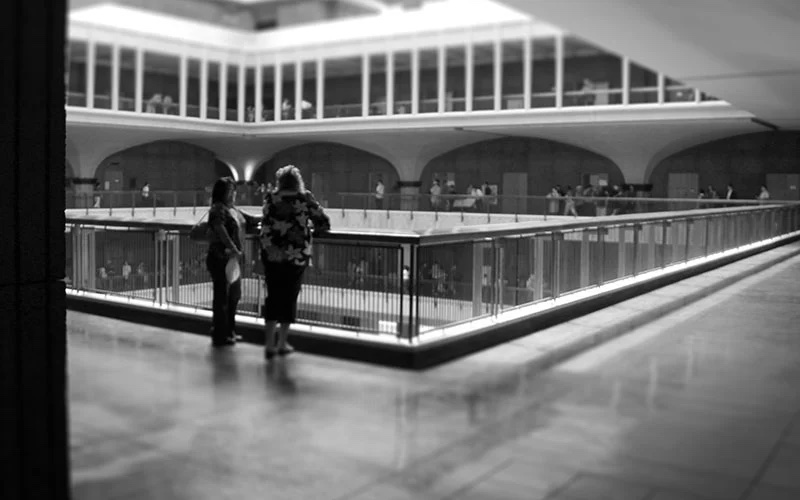 In a roundup of five haunted spots in Downtown Honolulu, the Hawai‘i State Capitol building stands out as being one of the only ones residents still visit (or work in!) regularly. Though there are many stories of the supernatural, one involves a former state senator who took her daughter to work one day and watched as her daughter played with an imaginary friend (or so she thought). The next day, when her daughter saw the statue of Queen Lili‘uokalani in front of the State Capitol, she said that was the nice Hawaiian lady that was playing with her the day before. Read more

For some first hand accounts of ghosts, hauntings and creepy happenings throughout Hawai‘i, read this post from back in 2004. One woman claims she witnessed the Filipino phenomenon known as maluganan, where a spirit enters the body of a living person. One guy tells several stories of ghosts he’s encountered, including a time when he was a youngster and was staying at Camp Erdman in Mokulēʻia. There’s even a story about someone who had a ghost living in her house in ‘Ewa Beach. Still today, the tales are sure to give you chicken skin. Read more

4 Places You Probably Didn’t Know Are Haunted in Honolulu

Once again, Lopaka Kapanui—sometimes referred to as the ghost guy—shares some secrets about the lesser-known spots on O‘ahu that are reportedly haunted. Think cemeteries in Kalihi and Waialua; Maunalua Bay, where unidentifiable double hulled canoes have been spotted at night; and Makapu‘u Lookout, where white flaming orbs have been seen in the sky at night. Read more

The Legend of Hawai‘i’s Night Marchers

You may have heard of the night marchers, the phantoms of ancient Hawaiian warriors. In life, these men protected the most sacred and high-ranking chiefs during the night. Now, their spirits have been rumored to roam places such as Mākaha Valley Plantation, Ka‘ena Point, Kalama Valley and Yokohama Bay—to name just a few. Apparently, night marchers are most active on the last four Hawaiian moon phases. And though you aren’t supposed to go looking for them, sometimes they find you. For instance, one man claims to have seen an endless line of torches disappearing off the mountain ridge by Dillingham Airfield while he and his son were camping on Mokulēʻia Beach. Read more

The 9 Most Haunted Places on O‘ahu

This post from 2014 talks about known and lesser-known haunts that are more active—paranormally speaking—than others. Think the banyan tree at the start of Mānoa Falls Trail, where it’s been said you can hear the faint sound of drumming. At the 16th Avenue bridge in Kaimukī, residents have reported seeing the spirit of a little girl who was killed in a hit-and-run. There’s also Kipapa Gulch in Mililani, where the sounds of people crying under the bridge. The others will surely make the hair on the back of your neck stand up. Read more

Listen as the local master storyteller tells the tale of menehune at a house on Kalaniana‘ole Highway. He also shares a story about a Nu‘uanu house that’s so haunted the Society for Psychical Research investigated it and called it the most haunted location on the island of O‘ahu. Plus, there’s a story of a kahuna who tried to bless a house with salts he had made himself, throwing all the salt at the house. The next day, he woke up the next day with those same salts covering his blanket, his floor and some back in the bowl. Read more

If you’re feeling really brave, flip through these books featuring a variety of local ghost stories. A frightening collection of supernatural experiences are documented in Obake: Ghost Stories in Hawai‘i and The Secret Obake Casebook: Tales From the Dark Side of the Cabinet by Glen Grant; Haunted Hawaiian Nights and The Legend of Morgan’s Corner and Other Ghost Stories of Hawai‘i by Lopaka Kapanui; as well as Hawai‘i’s Best Spooky Tales and Madame Pele: True Encounters with Hawai‘i’s Fire Goddess by Rick Carroll. Read more

Though these are purely fiction (we can only assume), three talented writers terrified our staff with their short stories to HONOLULU’s Hawai‘i Ghost Story Contest. “Bonfire Blues” tells the story of an eerie encounter with an older woman—or so she thought—on the beach. “Drip” is the story of a woman who feels raindrops, or so she thinks, that begin to smell foul, but it’s much more than that. Then there’s “Dream Lover,” a tale of a woman who’s both human and reptile—not to mention deadly. Read more