More Than Any Other Brewery, Beer Lab HI Captures the Everyday Joys of Living in Hawai‘i

In craft brewing, Beer Lab feels like what the Hawai‘i Regional Cuisine movement was to Hawai‘i’s culinary world almost 30 years ago. 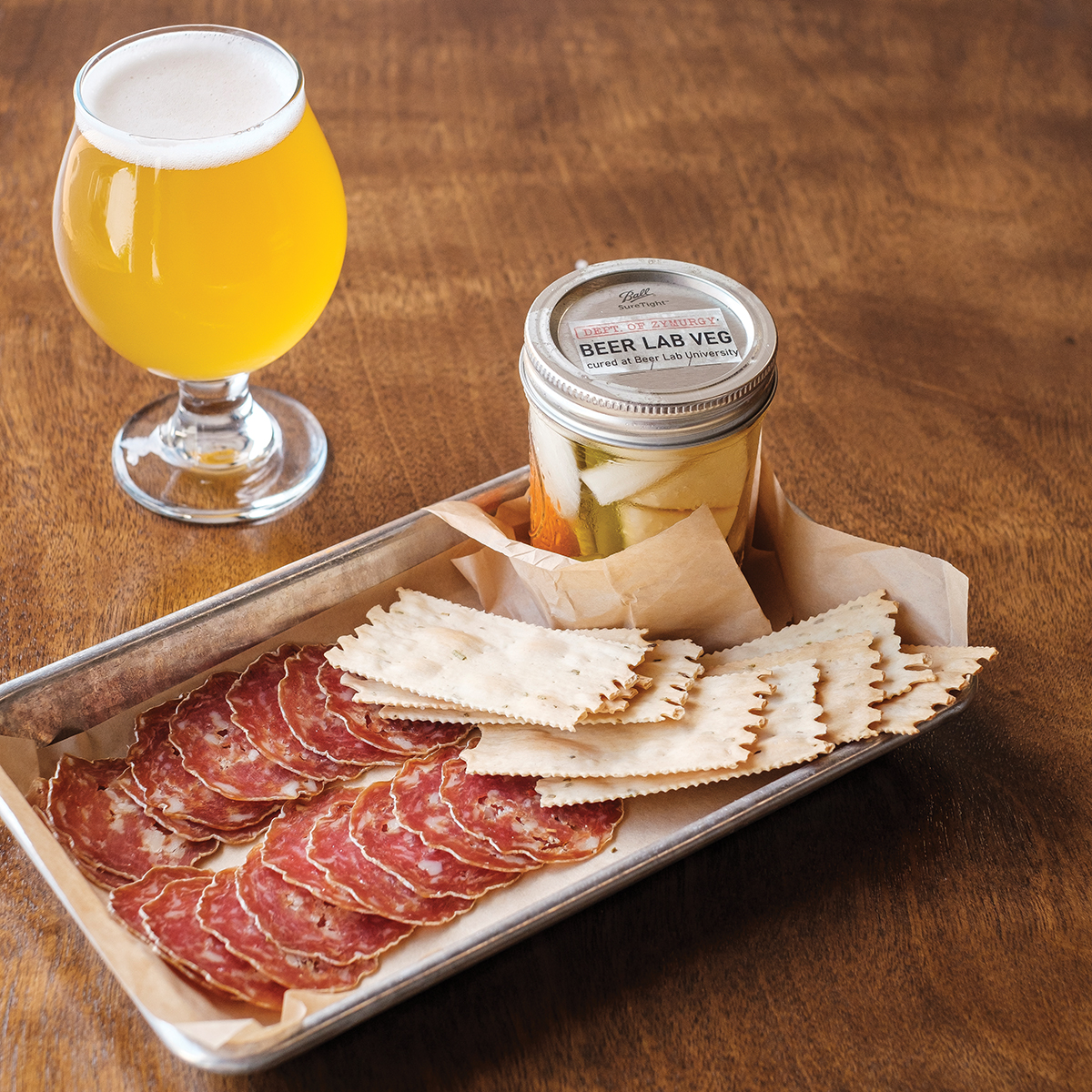 A glass of Beer Lab’s High Valyrian, served alongside the debut of the brewery’s salami. Beer Lab is the only establishment in Hawai‘i to have its house-made charcuterie certified by the Department of Health. Photo: Aaron K. Yoshino.

If this had been a year like previous years, I would have written about Beer Lab HI as I have written about it in the past: a really weird and unique brewery in a field—in Hawai‘i and the rest of the U.S.—already known for being really weird and unique, where everything from saffron to spirulina can end up in your brew. We chose to highlight Beer Lab now because during lockdown, each week, it released a different limited brew—some we loved, some we hated. And regardless of what we thought, they almost always sold out within an hour. Among them: Chase the Sunset, a Belgian ale with lychee and li hing mui; Stairway to Melon, a New England IPA with Melona; Sup Palala, a sour saison with guava and Hawaiian chile peppers.

This is not a year like other years. These days, if we are not talking about the pandemic’s devastation, we are talking about race. And so it’s only now that I realize, out of the approximately 20 (the number fluctuating especially in the past year) breweries in Hawai‘i, Beer Lab is one of the few with nonwhite owners and head brewers. Not that this is unusual in the craft brewing industry as a whole: According to a 2019 national survey by the Brewers Association, 88% of the people who own craft breweries are white, 4% are Native American, 2% are Asian, 2% are Hispanic, and 1% are Black. But given Hawai‘i’s demographics, it stands out.

Nicolas Wong, who started Beer Lab in 2016 with Kevin Teruya and Derek Taguchi, says in his experience, “the beer industry has been really supportive. [Race] is not overlooked, but nobody really thinks about it a lot; we’re all thinking about beer.” 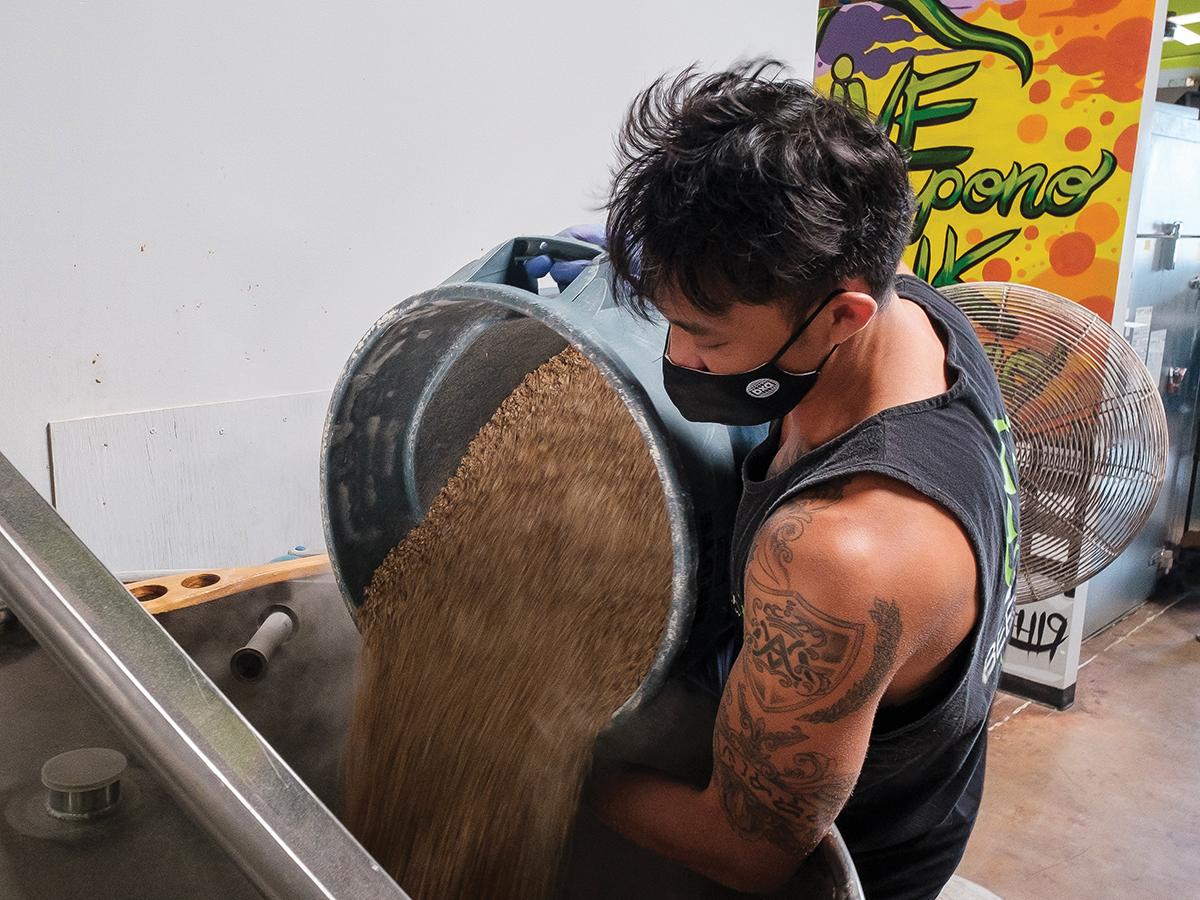 But what he does think about: “The history that is told of Hawai‘i is a lot different from the history of Hawai‘i in our heads. The one that’s told: There were sugar plantations and you’re in the fields and that was your ancestors and they worked hard. But what we think of is the manapua man, we think of drinking Icees at the crack seed store. It’s not surfing in Waikīkī with the hula dancers. It’s shave ice from Waiola Shave Ice. It’s these small little gems that we think of. That’s the history that we remember and that resonates with our people, our customers.”

And that’s what I realize draws me so strongly to Beer Lab. I was not born and raised in Hawai‘i, but over the 14 years I’ve lived here, I’ve come to love the melding of Asian culture into daily life, where I can get mochi and Melona bars and crack seed at Longs. And while other local brewers might incorporate the usual tropical fruits like liliko‘i and even at times breadfruit, only at Beer Lab would you find a Green River slushy beer sprinkled with li hing and a BLT brew that refers not to the sandwich, but basil, lemongrass and Thai chile. In craft brewing, Beer Lab feels like what the Hawai‘i Regional Cuisine movement was to Hawai‘i’s culinary world almost 30 years ago, when chefs including Alan Wong and Roy Yamaguchi turned away from the continental cuisine popular at the time to highlight the flavors of the Hawai‘i they grew up with. 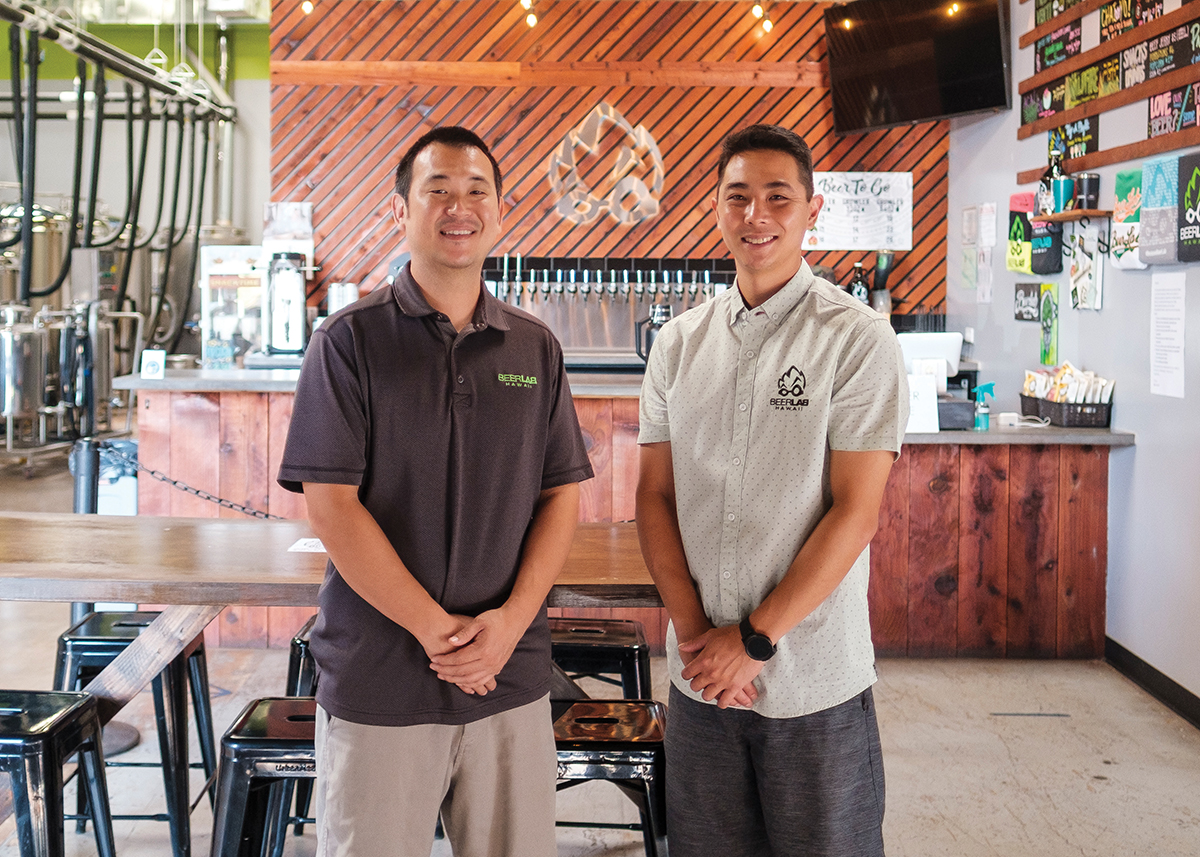 Not that all of the brews are Hawai‘i-specific. The Ko‘olauloa IPA tastes like a Creamsicle of beers—slightly sweet and juicy, with little of the bitterness IPAs are known for. And the most memorable beer I’ve ever had was Beer Lab’s Jedi Mind Trick, a stout masquerading as a lager: a clear, blonde-hued beer tasting of creamy toasted malt. I wasn’t a fan of the recent Akshen, Bu!, an ale flavored with caramel and hazelnut, as sweet as it sounds. Beer Lab’s owners don’t expect everyone to love every beer they make and admit to some major flops. “We try to push boundaries—that’s how we like to drink, that’s how we like to experiment with our beers,” says Wong. “The only way you can find a great beer is to try. You end up with some not so good ones, but you end up with some fantastic ones.”

Part of the reason Beer Lab is able to take risks with its beers is that initially, Teruya, Taguchi and Wong kept their day jobs. The three met while working as engineers at Pearl Harbor and opened Beer Lab on University Avenue in 2016. Wong said back then: “If we’re going to do something in addition to our day jobs, this hobby, this second job has to be super fun. To keep it fun and enjoyable, you don’t pump out beer like a machine, you try to get better, experiment, see how good you can get.” Since then, they’ve expanded with a Waipi‘o production facility and small tap room inside, as well as a kiosk at Pearlridge Center. Beer Lab is now Wong’s full-time job; Teruya and Taguchi continue to work at Pearl Harbor. 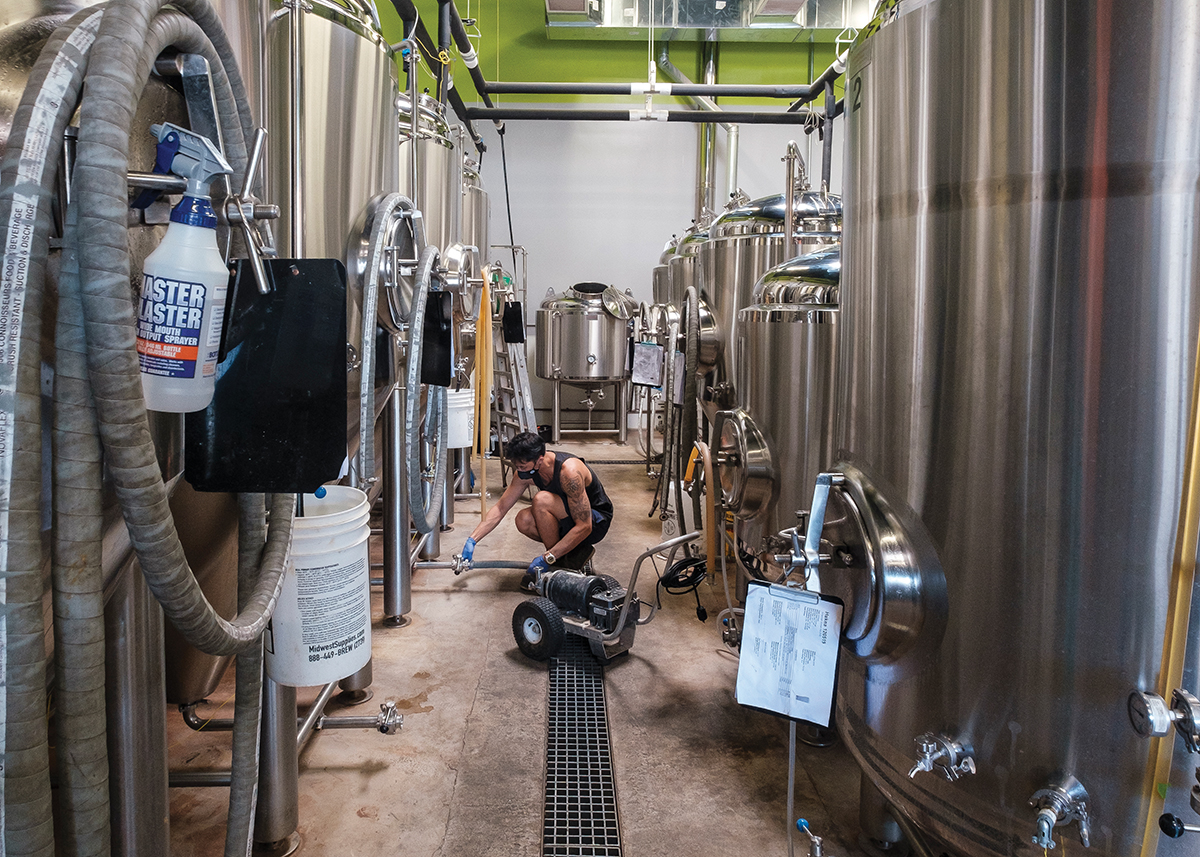 Because of Beer Lab’s growth, Teruya, who comes up with the beer recipes, has had to scale back some of his experiments, like wild yeast ales, which take longer to ferment, but he’s also managed to stay creative in clever ways. When he discovered that restaurants didn’t want to reprint menus every time Beer Lab changed its beers, which was often, he created a new series. Labeled Omakase on drink menus, it’s always the same style of beer and same alcohol content, but the hops are the “brewer’s choice.” The Maguro is a blend of Cashmere and Centennial hops, while Uni uses El Dorado and Vic Secret. Wong says they’ll continue making as many variations as there are fish in the sea.

The process of fermentation, as anyone who’s taken up a sourdough hobby recently knows, is incredibly susceptible to its environment. It absorbs everything around it. It’s why the creations from Beer Lab, which absorb the personal histories and cultures of its founders and brewers, taste so different from other brews. Eulerson Pajimula, the Filipino head brewer at Beer Lab, wrote recently of his Pan de Ube ale: “Inspiration is all around us. I love everything ube, from ice cream, ube tart, polvoron, and most especially Pan de Ube. A few months ago, we brewed three Filipino-cuisine inspired beers utilizing biko, pandan and calamansi, and have always wanted to make an ube beer but couldn’t source enough for a full 240-gallon batch. We’re stoked to finally have the chance to brew it, even if it’s only a single keg. This one is a personal endeavor that we hope everyone enjoys.”

The Best Beers Brewed in Hawai‘i in 2021