Where pork belly and kim chee fried rice are all wrapped together with cheese.

I used to hate goodbyes. But sometimes an ending leads to a new beginning. And saying goodbye is sometimes a reason to get together with old co-workers. To reminisce about the good times and the bad.

Mikey, my old co-worker from years back, was heading to the Mainland to start a new chapter in life. We shared memories of working Sundays at a local nonprofit, alongside our other co-worker Bills. We often joke about Mikey coming in early to work one day and taking a nap outside before starting, only to find he had the day off. I wanted to get the old Sunday crew together one last time before he left. 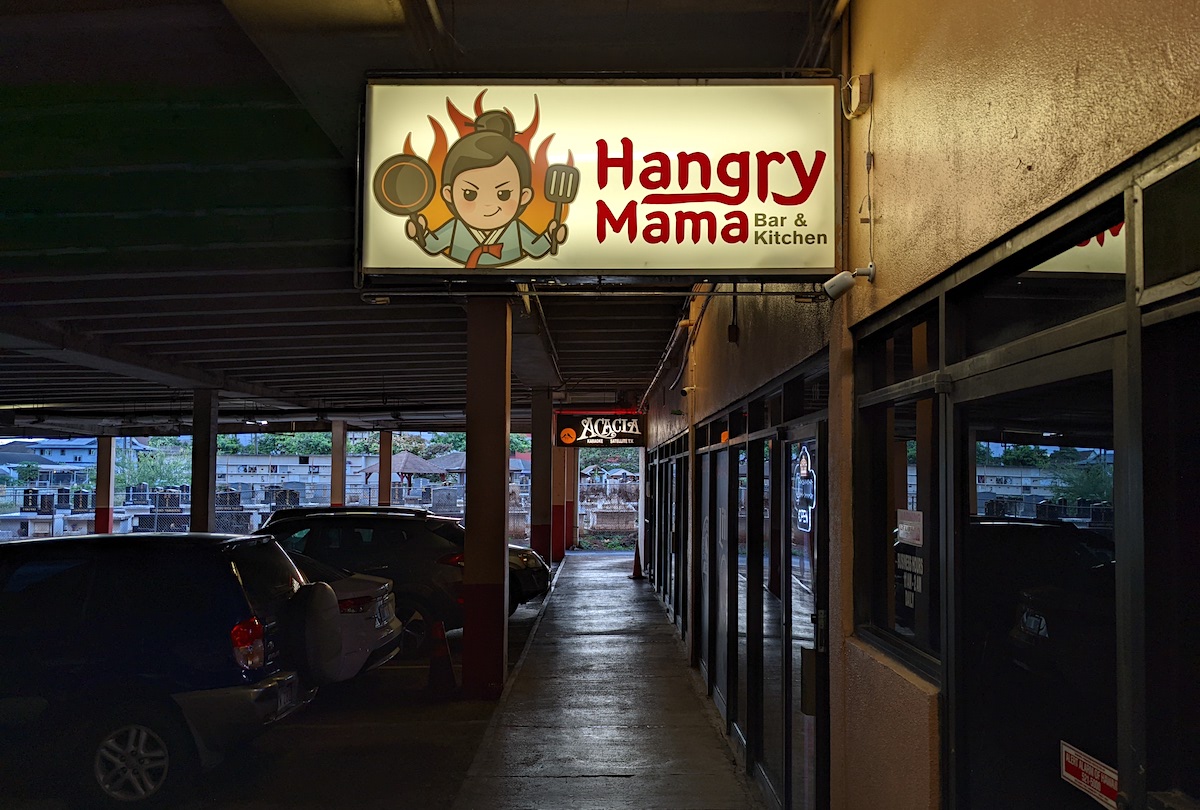 In the spirit of new beginnings, we got together at Pearl City’s newest late night lounge. Hangry Mama is in the Pearl City Business Plaza, in an area known for prolific dive bars. When driving in you’ll encounter a ramp going up. This leads to typical office spaces and daylight parking. Then there’s another ramp going down. This leads into an underground of perpetual neon-lit darkness, even during the middle of the day. And that’s where we found Hangry Mama. 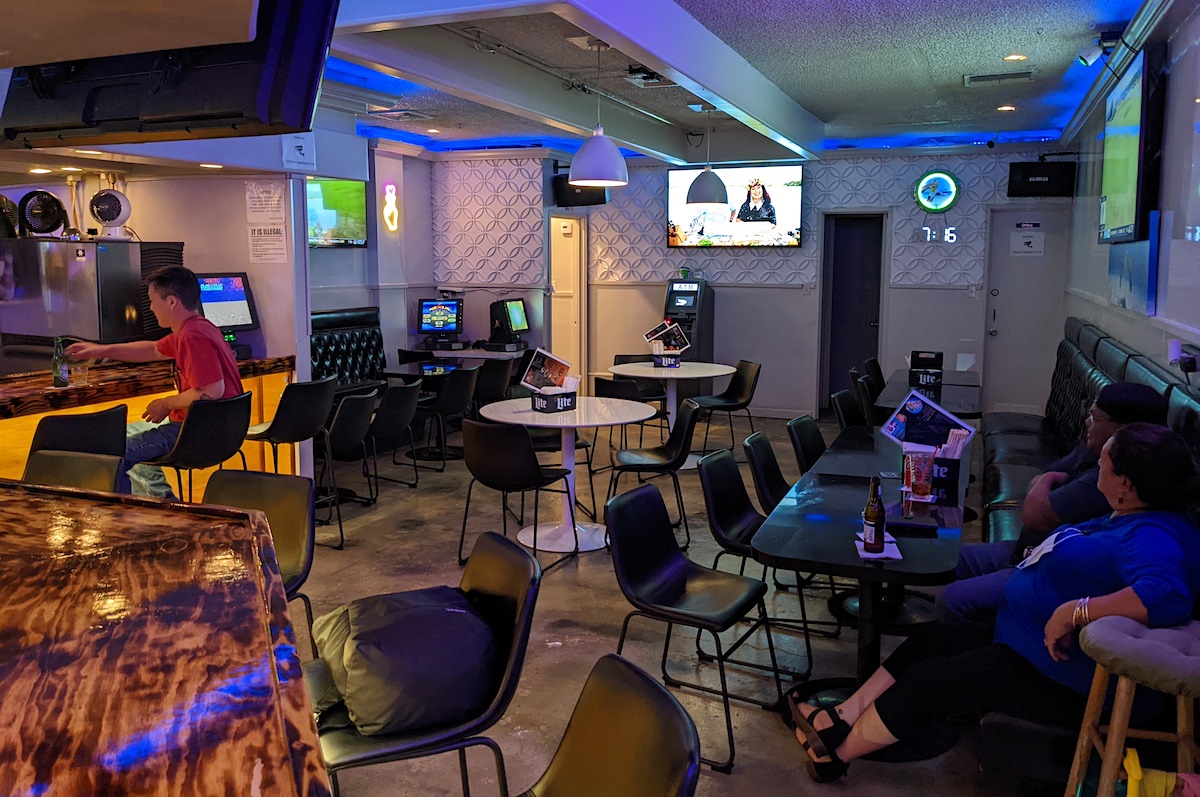 The lounge is cozy and intimate, with a comforting purple glow familiar to nightlife denizens. The bar is stocked with the standard assortment of liquor and backed with a TV tuned to the latest sports game. Karaoke is available at $1 per song. Bills is one of the best singers I know, so I was looking forward to his performance. But for us the main event tonight is the food. 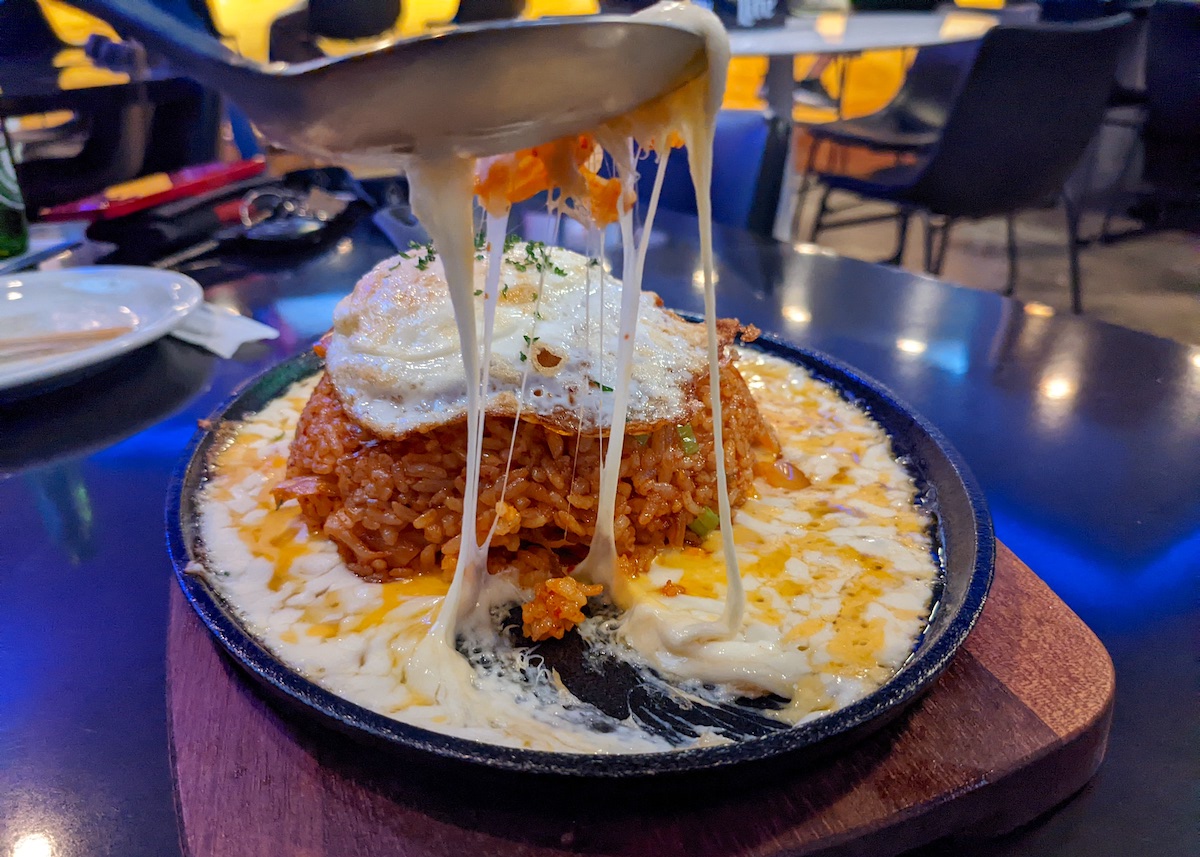 Hangry Mama’s kim chee fried rice ($20) is a beautiful presentation, like a miniature volcano. It’s crowned with an explosion of eggy goodness and surrounded by a lava lake of molten cheese. We break the yolk, releasing a golden cascade, and mix everything together. The first bite wakes you up with the robust sourness of kim chee. The egg holds it all together. But the star is the cheese. Its chewy, creamy texture adds to the enjoyment of eating and is an engaging counter to the sour kim chee. Mikey recommends trying it with the pork wrap, and the resulting heartiness enhances both dishes. 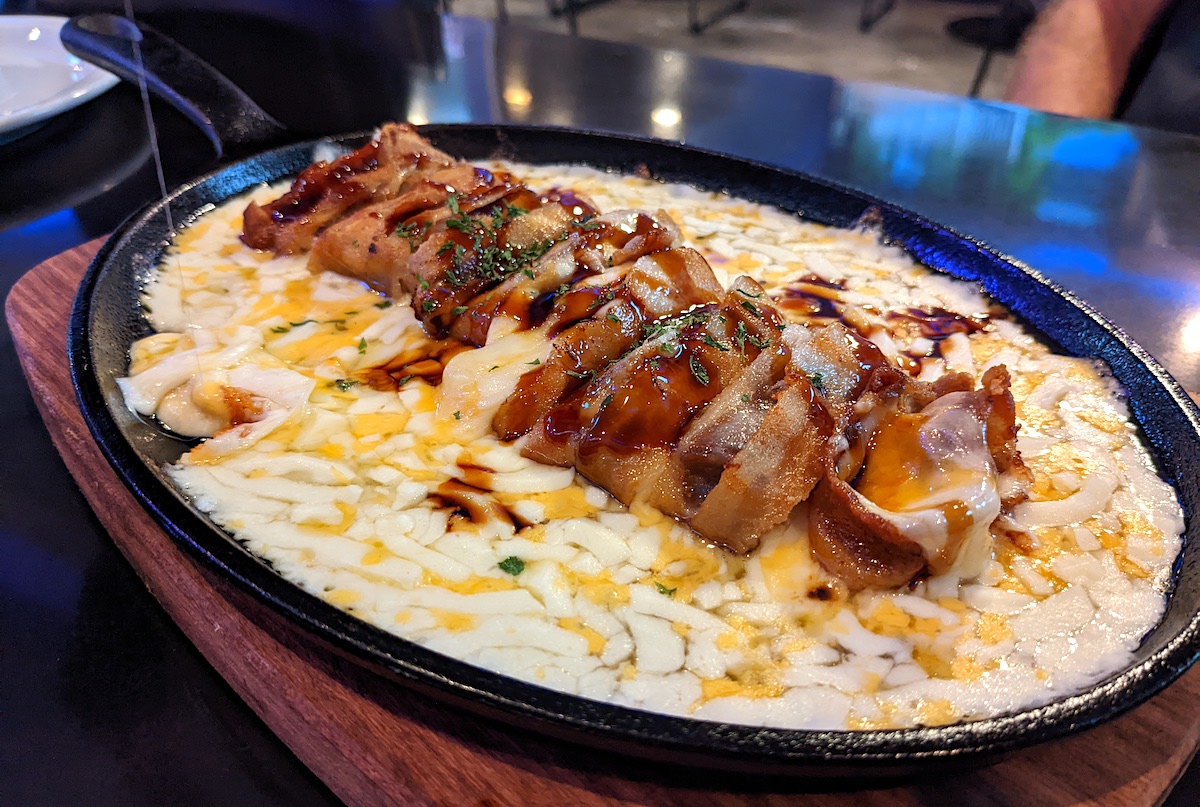 We smell the pork belly wrap ($20) before we see it. The savory aroma wafts through the room as it arrives sizzling at our table. The pork belly lies on a bed of bubbling cheese that is so hot, we take a few minutes to admire the sound of the sizzle while it cools. Our server suggests letting the cheese harden a bit and wrapping it around the pork, hence the name.

An intriguing idea, but we can’t wait. Grabbing our spoons, we go to work scooping up generous helpings of melted cheese and pork. Silky mozzarella and cheddar cheeses fill my mouth. As I chew, I’m met with the rich, salty seasoning of pork belly. My favorite dish of the night, it is gone faster than I would like. 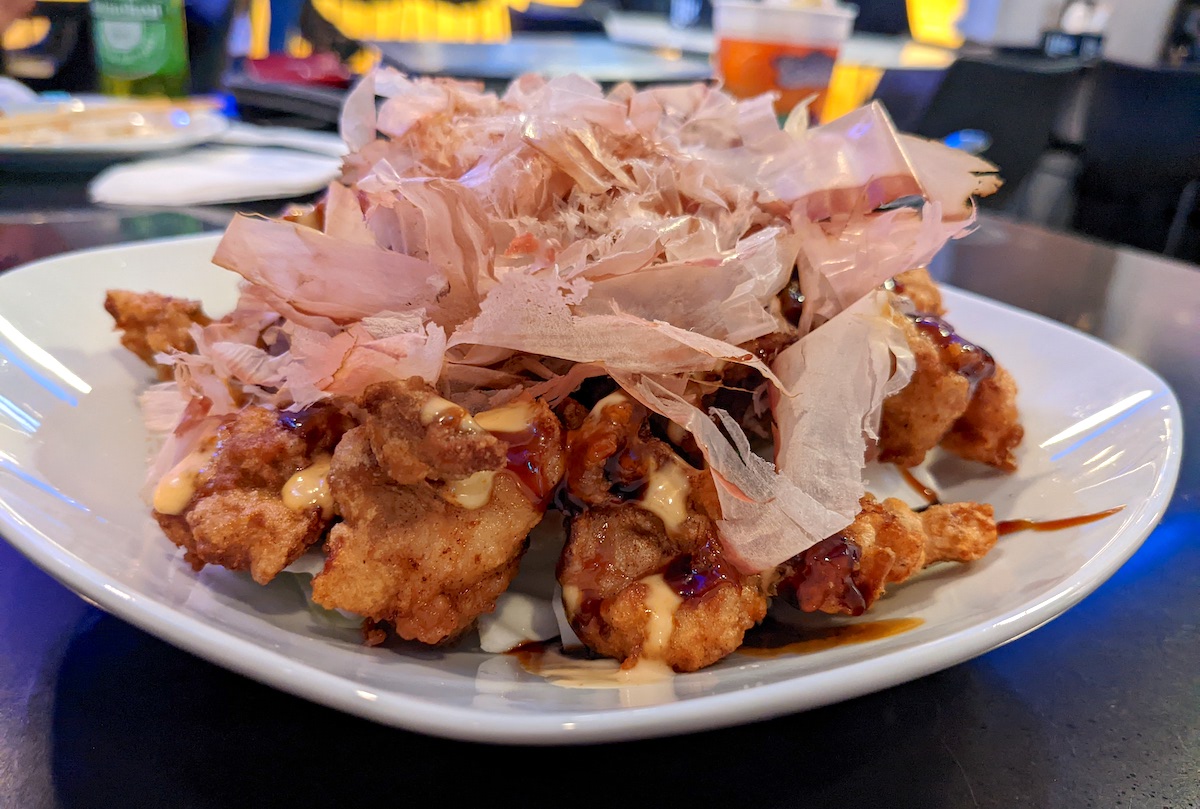 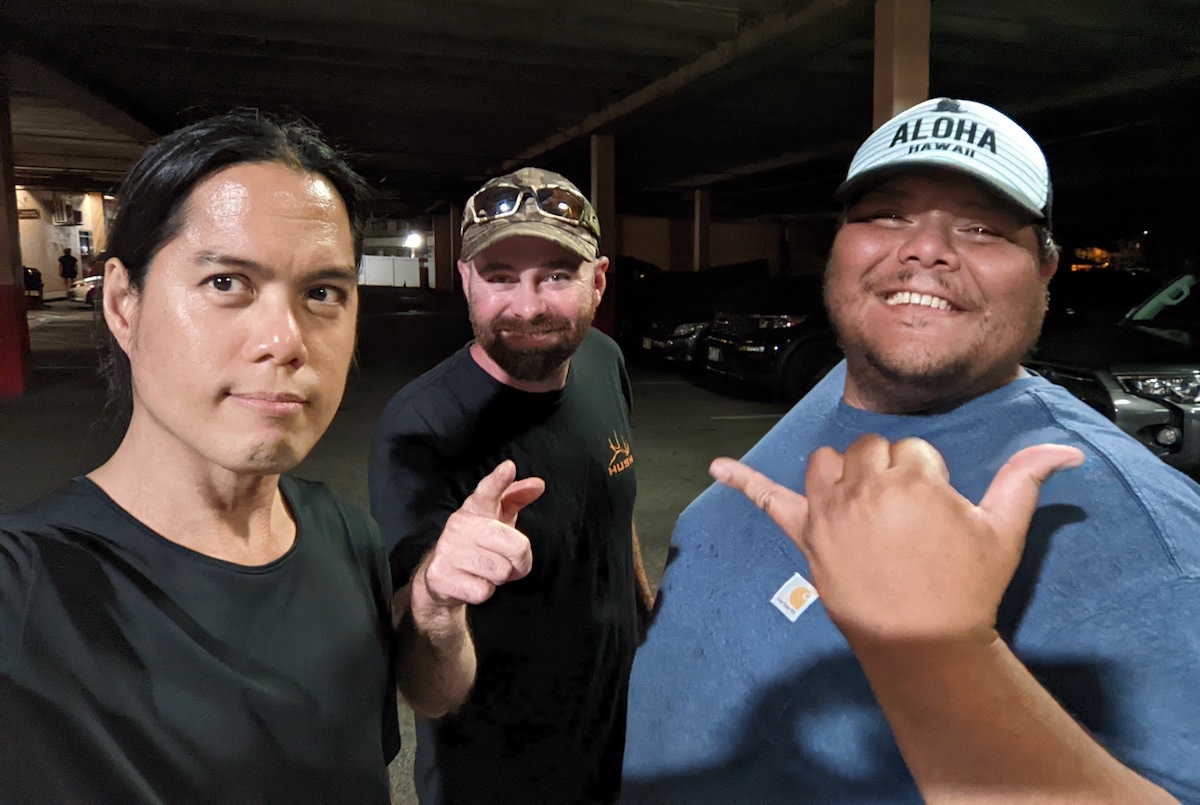 We finish up our meal and it’s time to say our goodbyes. We’ll miss you, Mikey. Wishing you much success in your future. And we look forward to when you return to Hawai’i. With this ending comes something new. A new start for Mikey on the Mainland, and a new nightlife joint for us to hang out at.