Western-style dishes viewed through a Japanese lens are quirky, comforting and oishii.

Long before a beret-wearing chef went viral for theatrically flipping and slicing oozing molten omelets over fried rice, pharmacist Nobukatsu Shibuya was preparing what would become Japan’s most famous yoshoku specialty: tonkatsu. Yoshoku—the category of Japanese comfort dishes inspired by Western cuisines—was introduced to Japan during the Meiji Restoration in the late 19th Century. Shibuya, the founder of Tonkatsu Ginza Bairin, Tokyo’s first tonkatsu restaurant, passed his recipes down. Nearly a century later his grandson has brought his versions of omurice (omelet rice), beef stew and spaghetti Napolitan to Hawai‘i.

Yoshoku Ginza Bairin opened recently on Beach Walk, next to Tonkatsu Ginza Bairin. Like its tonkatsu cousin, it is the first U.S. location for the offshoot brand. Quirky in its own way, the snug interior is a blend of modern with casual touches, and mirrors the food. Having been to a few yoshoku restaurants in Japan, to me the two restaurants feel one and the same. In Bairin fashion, the menu is diverse with a page dedicated to signature items recommended by Masaya Shibuya, Bairin’s third-generation chef-president. Each meal includes a cup of rich tomato and onion soup and a small green salad accented with crunchy taro chips. Entrees include unlimited helpings of rice or bread, just ask for a refill as you go.

SEE ALSO: Tenten Japanese Tempura Is Your New Must-Try Pop-Up—But Only for a Month

During a hosted lunch, I try several dishes starting with Shibuya’s favorite omurice ($22). White rice is fried with pieces of tender chicken thigh in a vinegary tomato ketchup sauce. It is then wrapped in a uniformly golden French-style omelet using TKG (tamago kake gohan) eggs from Waimānalo’s OK Poultry. Ketchup cascades into a pool, giving the omelet an extra acidic-sweet jolt. As a fan of the red stuff, I’m happy with my first few bites. Along with my omurice, I enjoy a cup of Vienna coffee ($6) made with Kona Coffee Purveyors coffee and am instantly beamed to a cozy corner of a kissaten coffee shop in Tokyo. 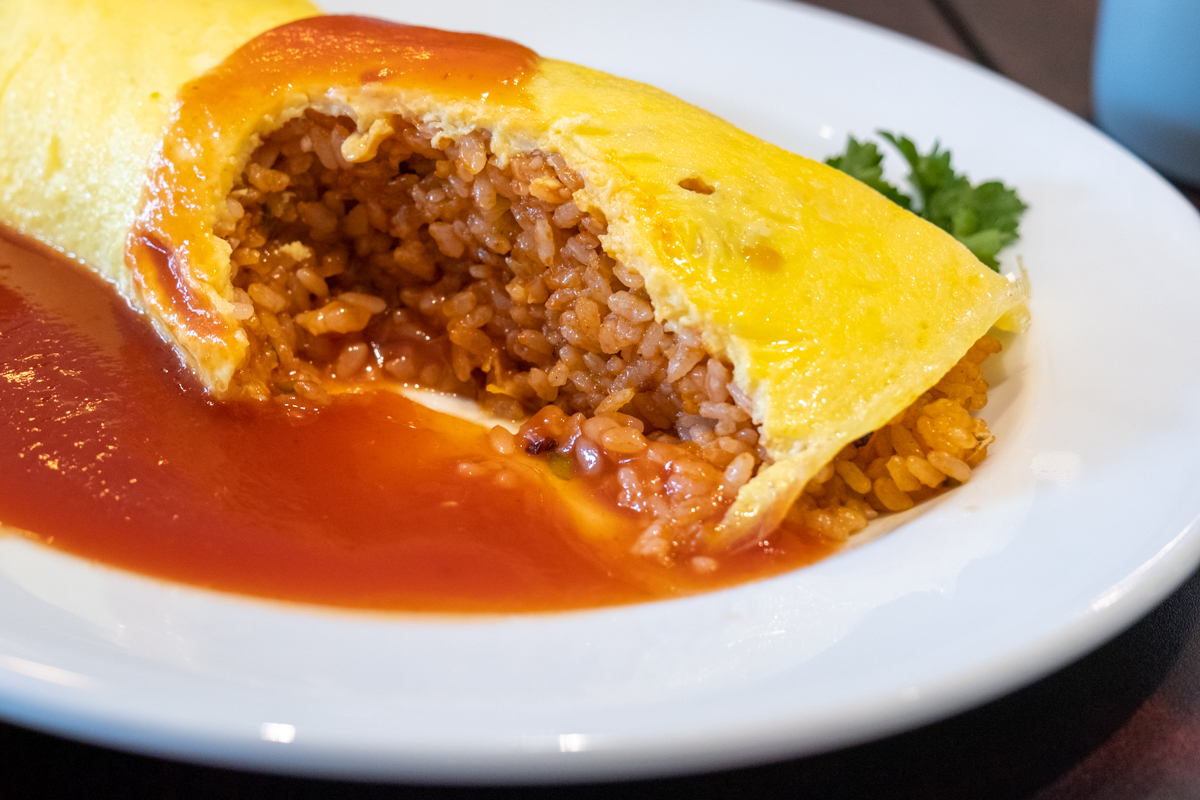 The prices aside, this is about as homestyle as Japanese cookery can get, which is the hallmark of yoshoku. It’s everyday food Japanese grow up eating at home. The ingredients are staples in any Japanese kitchen and just about every mom has her own variation on the recipes. 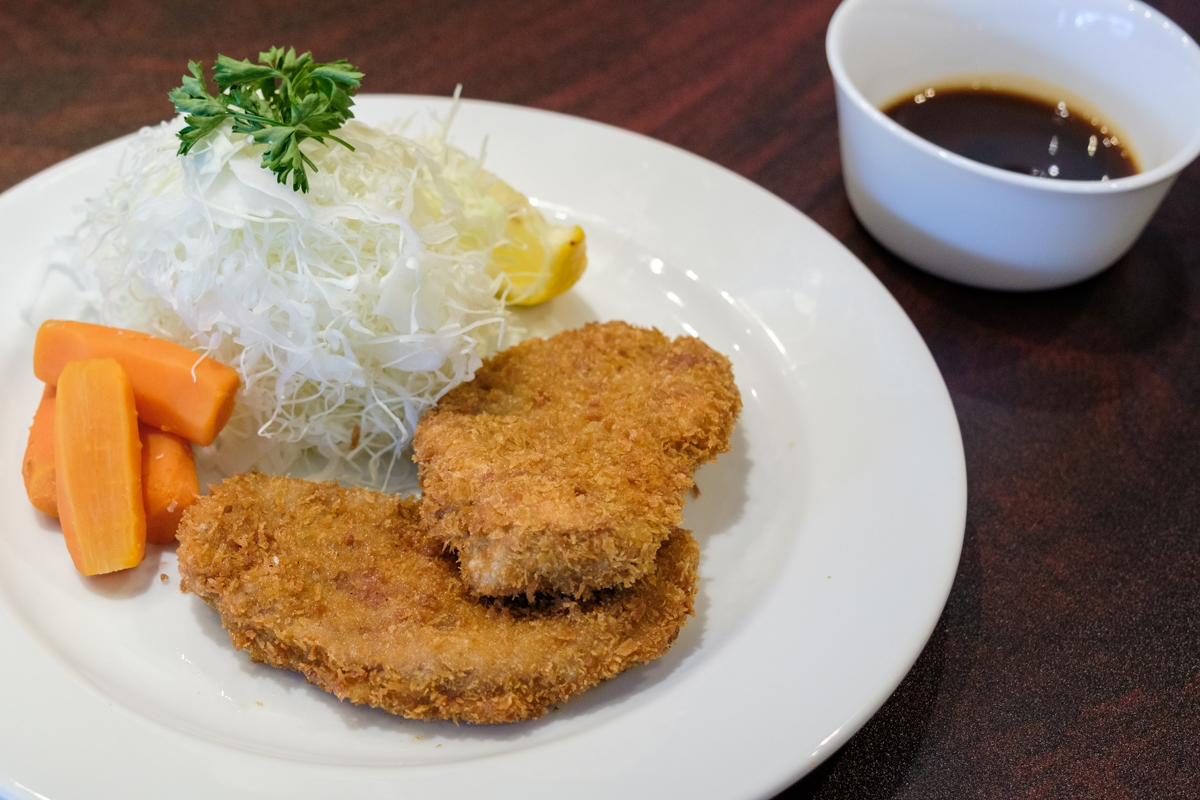 Being a rabid fan of tonkatsu, especially Bairin’s, I eagerly order the beef katsu set meal ($28.50). Two pieces of moderately sized filet mignon are coated in egg and panko and fried in cottonseed oil like their porky counterparts. Served with a mountain of shredded cabbage and a plate of rice, the tender beef katsu is mundane when compared to tonkatsu because unlike fried pork cutlets, the meat has no bite. I suppose the appeal lies in how effortlessly it cuts with a fork. You’re also provided a side of Bairin’s 20-ingredient katsu sauce developed by Nobukatsu and an oniony dressing for the cabbage salad—both boost this dish with much-needed flavor. 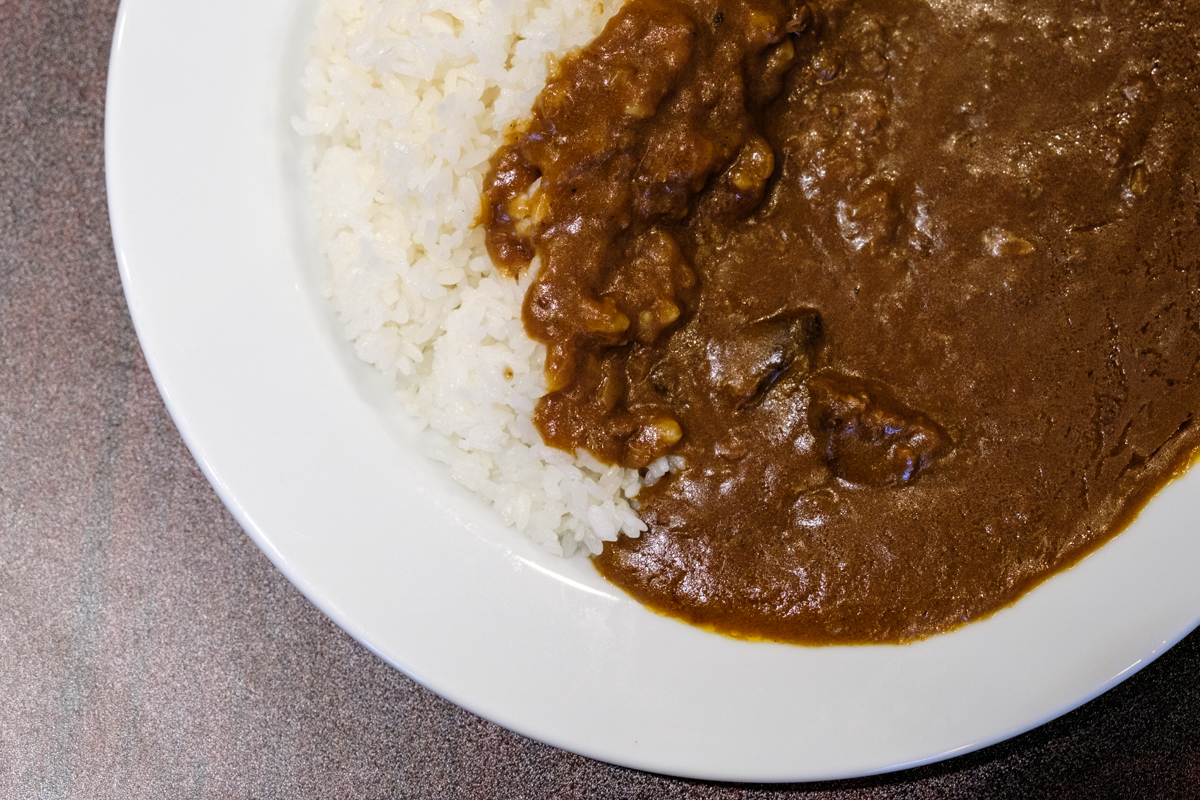 Always popular curry rice and hamburger steak are enjoyed by adults seeking a dose of nostalgia. Curry arrived in Japan with the British who adapted it from India, which was under their colonial rule at the time. The umber palette of Bairin’s beef curry ($26.50) belies the flavors that hide within: deep curry notes spiked with hints of cumin, clove, nutmeg and coriander in a rich, beefy gravy sweetened with carrots, onions and potatoes. It makes even the ubiquitous Coco Ichibanya taste like it came from a box. I’m going back the moment I crave a bowl of something deep and complex.

Bairin’s hamburger steak ($26.50) is another surprise. The humble patty is made with beef and pork laced with a generous helping of minced onion that injects pockets of sweetness that play well with the tangy demi-glace that glosses this hambaagu. It rests on a plate with potato fries and steamed vegetables with rice served separately, perfect for sopping up all that sauce. 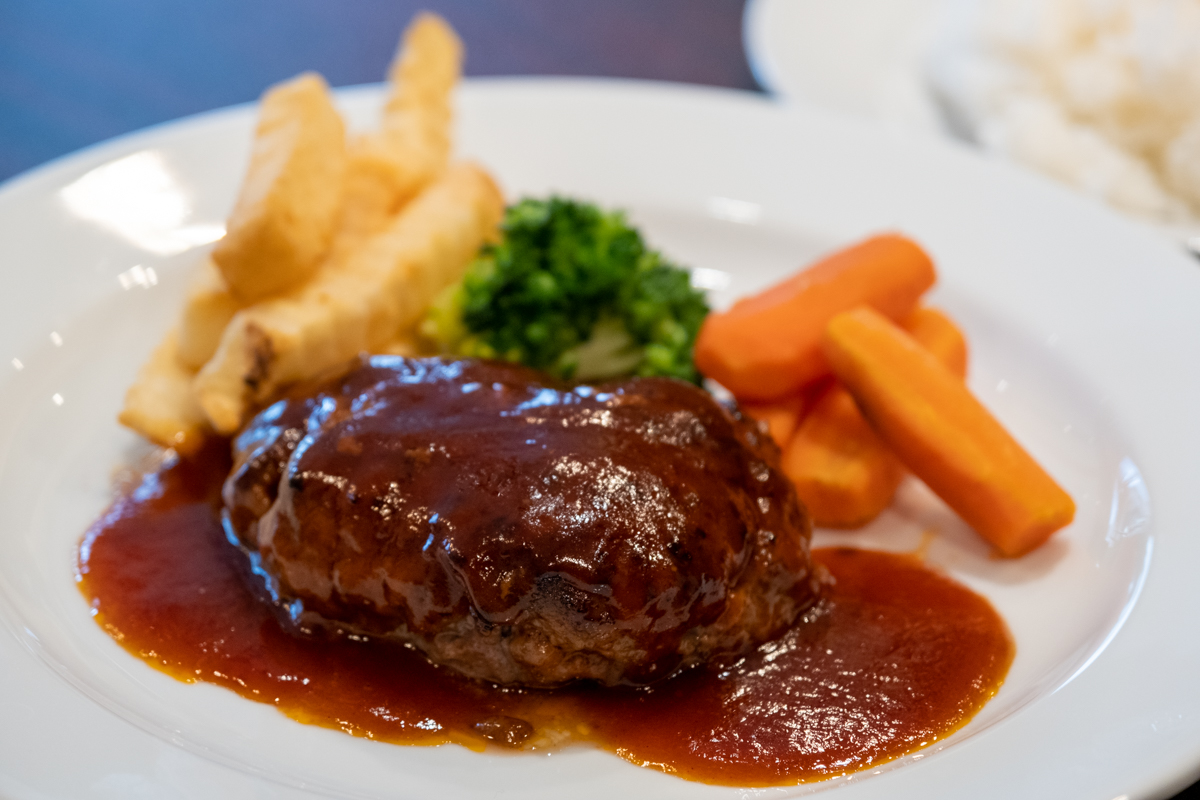 The sticker shock of a $26 hamburger steak is undeniable, which may be why Yoshoku Bairin this week debuted lunch sets of $14 to $16 including soup and salad.

Other items include cheesy chicken doria, a creamy rice dish not unlike risotto; spaghetti Napolitan, and seafood macaroni gratin (all $16 to $23). Don’t make the same mistake I did by passing on the Melty Beef Stew ($28.50). Frolic associate editor Kelli Shiroma Braiotta says it’s extra comforting, akin to a warm hug. The rich stew carries strong hints of demi-glace; it is full of melting morsels of beef, potatoes and carrots and is served with bread or rice.

In the background between bites, the quiet chatter of expat Japanese moms reliving their childhoods is cathartic. It really feels like I’m back in Japan again. 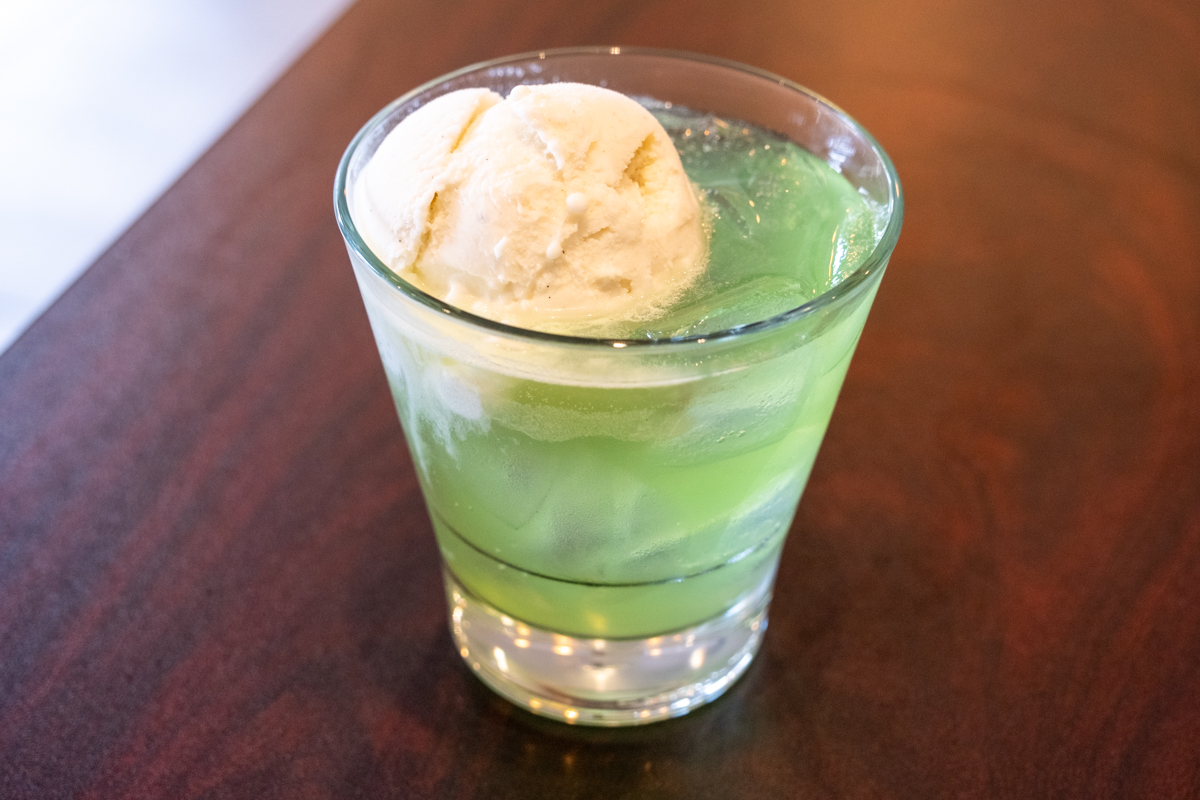 Before I leave, restaurant manager Yuuki Imahori delivers a melon soda float that screams natsukashii (“nostalgic”). He tells me that melon cream sodas are a must-have at yoshoku restaurants in Japan, and Bairin’s is no exception. It’s made with a scoop of Il Gelato Tahitian vanilla gelato and a premium melon soda from Japan, making it a sweet luxe treat at $6.50.

While omelet rice, beef curry and spaghetti made with ketchup may not seem foreign to our local palate, yoshoku as it’s evolved in Japan is an adventure, especially if you’ve yet to visit. With the rise of Japanese pop-ups like Guru Guru Kitchen and Tenten Tempura, it is comforting that many of the experiences I crave from my travels, including a stop at a yoshoku restaurant, aren’t so distant after all.