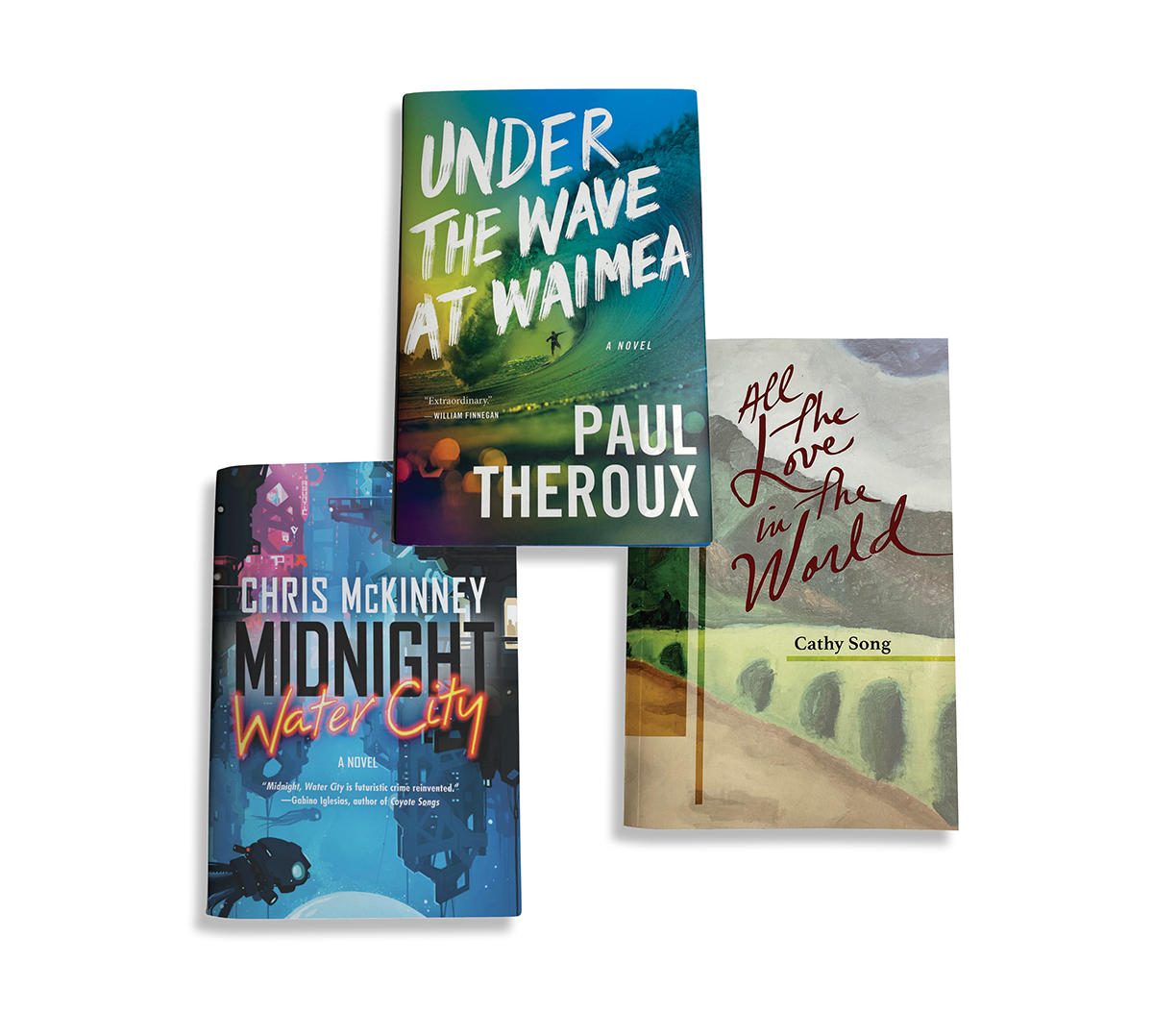 For authors with new books the times are daunting—no bookstore readings, no book tours, review space in newspapers and magazines vanishing. Yet three Island writers who’ve made bold departures from their usual have succeeded where it matters, on the page, by making literature.

The Chris McKinney we know from The Tattoo to Boi No Good rubs our noses in inequality and racism. But in Midnight, Water City, McKinney lets our current mess play out in the year 2142—set atop Mauna Kea and in a vast underwater suburb that feels like Kaka‘ako with gills. Like his tarnished detective narrator, an 80-year-old who has just lost his patron—a patron who was the most important person in the world because she saved Earth from an asteroid—McKinney boldly reinvents himself and, in a way, the whole “local” genre thing. Critics nationally are hailing the novel for its ideas and Blade Runner-esque ambiance, but his indictment of income and political inequality is still what makes it run hot and true. More good news: It’s the first of a series to be published by top New York indie Soho Press.

Setting his novel in 2142,McKinney reinvents
himself and the whole “local genre” thing.

A portrait of a marriage from master poet Cathy Song is a pandemic gift we never saw coming, but that’s All the Love in the World (Bamboo Ridge Press). Though it has roots in the plantation camp period, it fragments and upends the typical immigrant narrative with oddly matched lovers: Eleanor Yee walks into Sung Mahn Park’s life with a recipe for mooncakes in her pocket and becomes the savior of the family bakery, releasing “Mahny” so he can become a pilot. As his career uproots them, they face discrimination but also enjoy a middle-class life, taking trips and cruises, treating themselves to tourist epiphanies in Spain and India, baffling their daughters. Song doesn’t stint on the downslope of life, either—depression, dementia, death—before leaving us in an afterglow of compassion.

Compassion is in short supply for the main character of Paul Theroux’s 56th book, the novel Under the Wave at Waimea (Houghton Mifflin Harcourt). North Shore surf legend Joe Sharkey wakes up at 62 to discover all that matters in his life is behind him, then compounds it by running over a homeless man on a bike. Freed from accountability by his fading celebrity (how Hawai‘i is that!), he’s busted by his younger girlfriend, Olivia, who subjects Surf Scrooge Sharkey to a Marley-like confrontation with other people’s lives.

Theroux nails “The Shark” with all the zest of a missionary who knows the real danger of all that sunshine, surf and hedonism isn’t skin cancer. Doesn’t matter if you’re buddies with Hunter Thompson and can shaka Eddie Aikau without attracting hoots; if you can’t care about other people, you’re the biggest loser.

Looking for more reading recommendations? Every month we reach out to our friends at Da Shop: Books + Curiosities to ask their community of writers and readers for their picks.