Our takeaway and tips from Honolulu’s long-awaited debut of the hip Broadway musical by Lin-Manuel Miranda. 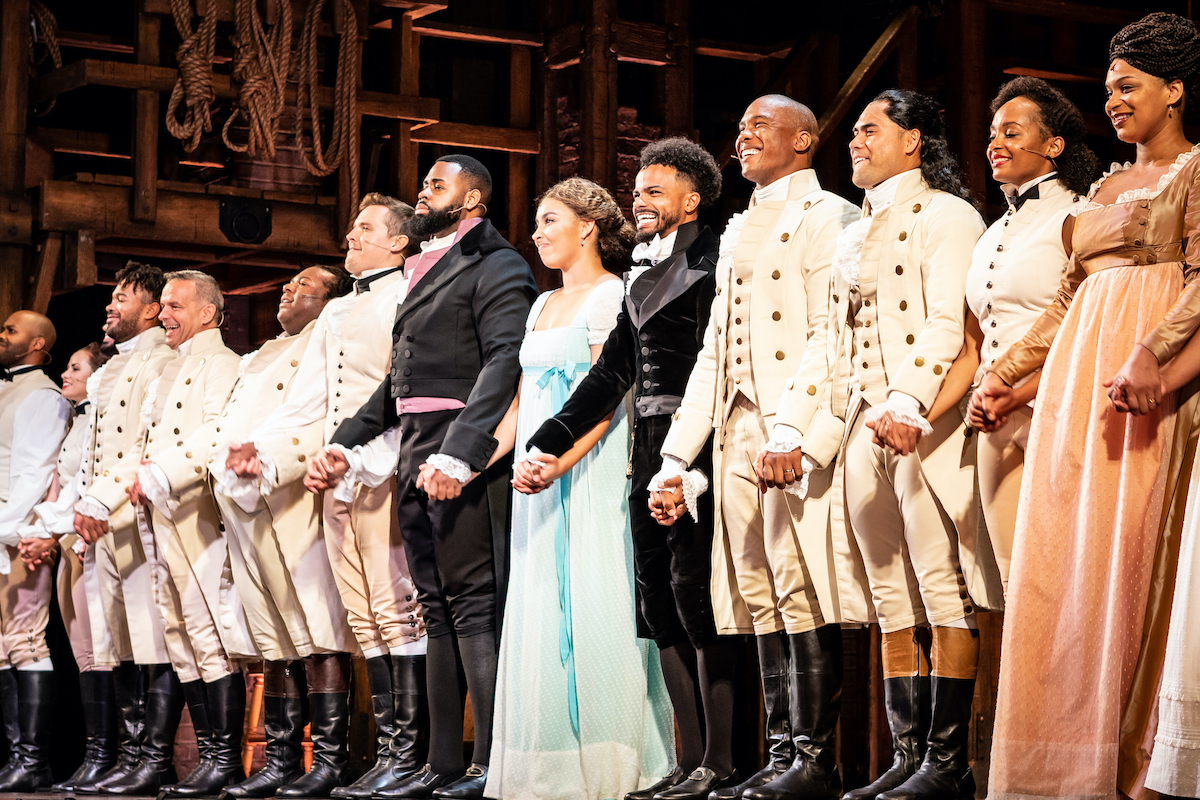 Honolulu theatregoers are finally “in the room where it happens” with the opening of the mega musical hit Hamilton, which has an 8-week run at Blaisdell Concert Hall. The tour company wowed the opening night audience with electric performances of the genre-bending Broadway hit.

The long-anticipated, award-winning musical, which runs through Jan. 29, is the marquee production for this comeback season of Broadway in Hawai‘i after the long pandemic pause. We attended the Dec. 8 show as part of the media preview that also included a crowd full of season ticket-holders. While Honolulu has hosted some high-quality productions, we’ve also witnessed some tours that limped into town and made us want to go home and listen to the original cast recording instead. This company delivered a powerful show that was worth the wait, with talented singers, dancers and actors showing their passion in this intense, high-drama, modern musical. We left the show wondering if we could see it again. 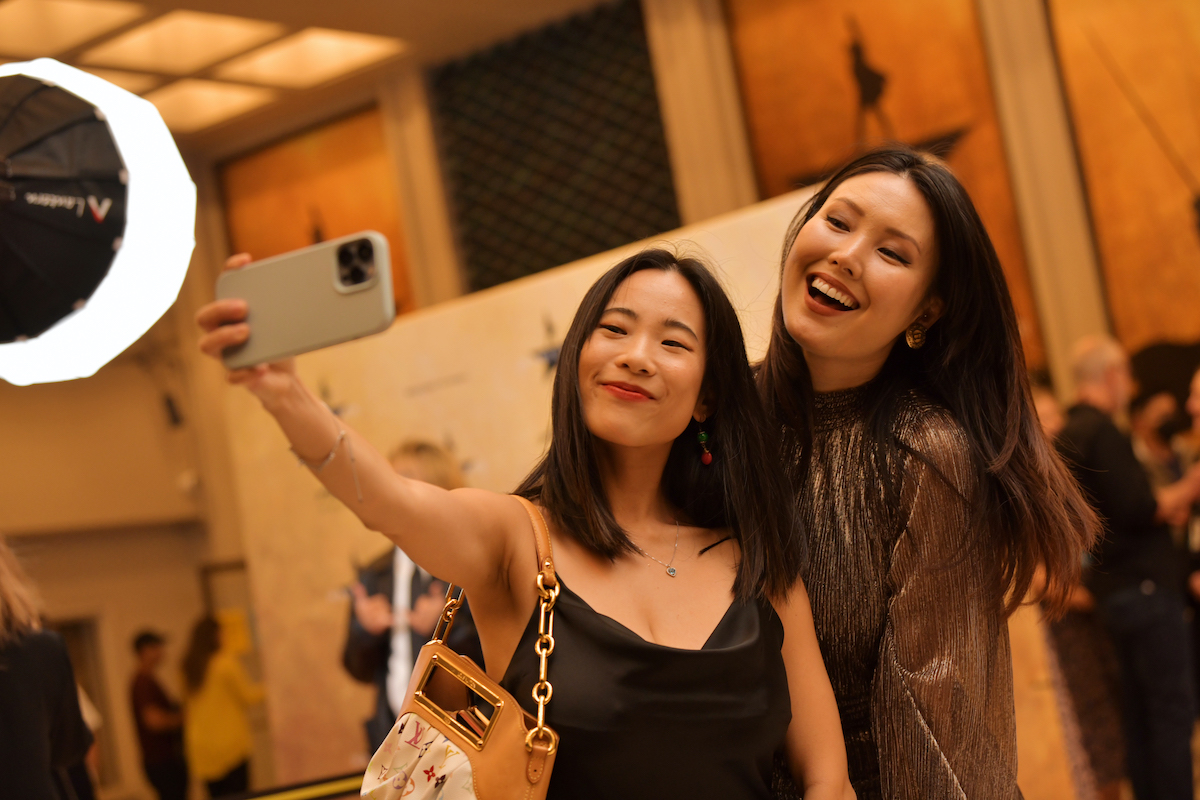 For this tour, DeAundre’ Woods plays Alexander Hamilton with air of perpetual ignition; Morgan Anita Wood gives Eliza Hamilton a warm power; and, on Thursday, Ellis C. Dawson III depicted the complicated character of Aaron Burr. All of the major players deliver. Marja Harmon is the intriguing Angelica Schuyler; Darnell Abraham, commanding, yet human, as George Washington; and Rick Negron as King George, the over-the-top royal. Paris Nix sparkles in the double role of Marquis de Lafayette/Thomas Jefferson. And Brandon Louis Armstrong brings boisterous presence to the double role of Hercules Mulligan and James Madison. Our tech note was that it was sometimes hard to discern the lyrics of both the fast-talking Jefferson and the knowing Madison in the second act. And this is a show where words matter.

Writer/producer/actor Lin-Manuel Miranda composed roughly 27,000 words for the show, and many of his phrases are likely to ricochet through our heads for a long time to come, including Hamilton describing himself. “I’m just like my country. I’m young, scrappy and hungry. And I’m not throwing away my shot.” In 2016, the show won 12 Tony awards, the Pulitzer prize for drama, then seven Olivier awards in London and the soundtrack won a Grammy. The Disney+ movie brought it home for those who hadn’t yet seen it on stage. Even if you’ve never seen it on stage, you’ve likely heard some of the music as it percolated through pop culture.

The audience roared for another famous line: “Immigrants! We get the job done.”

Until this show debuted in New York in January, 2015, many knew Hamilton as the face on the $10 bill. The mix of rap, jazz, hip-hop, R&B and Broadway has made this Founding Father’s sometimes dramatized life into a compelling commentary on culture, politics and the origin story of the United States. 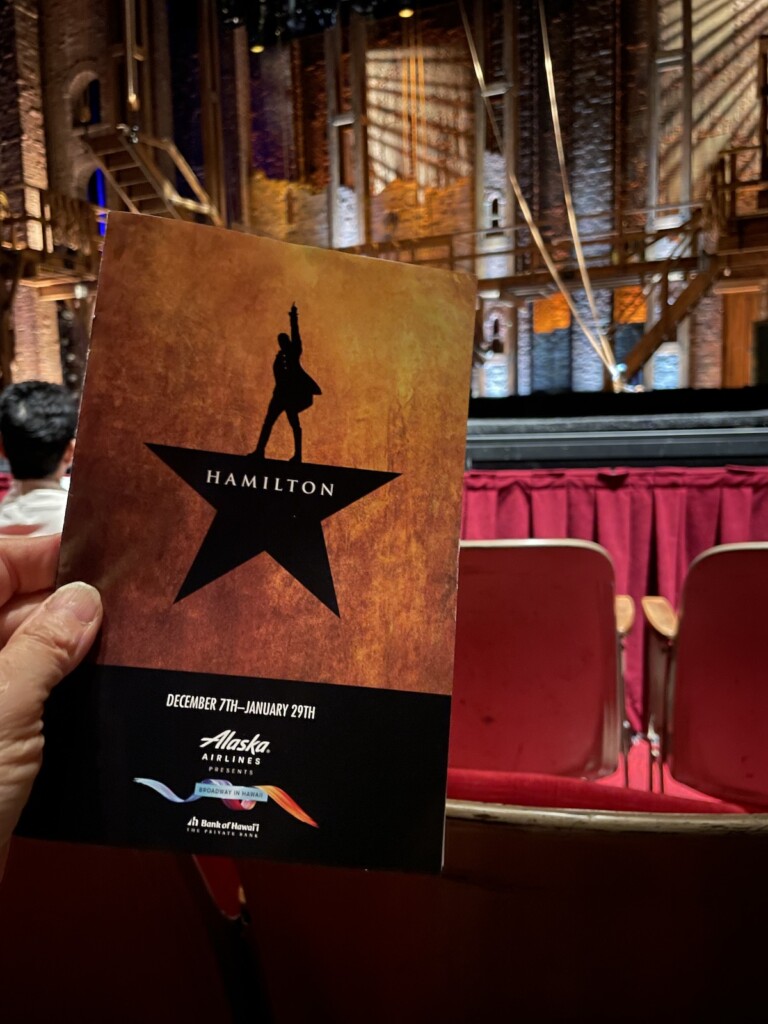 Here’s our take and tips on what to expect:

If you’ve seen the show, the movie or listened to the songs you know to expect rapid-fire pacing and a compelling and lengthy show. Miranda based the book, music, and lyrics on Ron Chernow’s acclaimed biography.

Double check your show time because start times vary. For example, Saturday shows are at 2 p.m. and 8 p.m., while on Sunday, the matinee runs at 1 p.m., an hour earlier. Monday through Wednesday, shows start at 7:30 p.m. Some, but not all, Thursdays and Fridays have two shows at 2 p.m. and 8 p.m.

This is an 8-week run with good tickets available for a variety of shows and even a $10 lottery option. Tickets in the balcony start from $39 each, and some in the orchestra from $89 via Ticketmaster.com. If you’re flexible about when you can go, you can find the best deals there, but you can also hit sticker shock if you’re limited on your dates and find only “verified resale” tickets on sale when you want to go. Searching online can link you to ticket brokers who charge even more, so shop wisely. Each week, a lottery opens for $10 tickets—click here for details.

’Tis the season for traffic and many events in and around Blaisdell, so go at least 20 minutes early to allow time to park and walk. The main entrance to the Blaisdell parking garage is on King Street at the intersection with Victoria Street. Parking is $8, so bring exact change to get through faster. For opening weekend, city officials counted four events happening: Mele Kalikimaka Marketplace, Holiday Wellness and Metaphysical Expo, Hamilton and the Earth Wind and Fire concert. That might mean searching for street parking or overflow parking at McKinley High School. 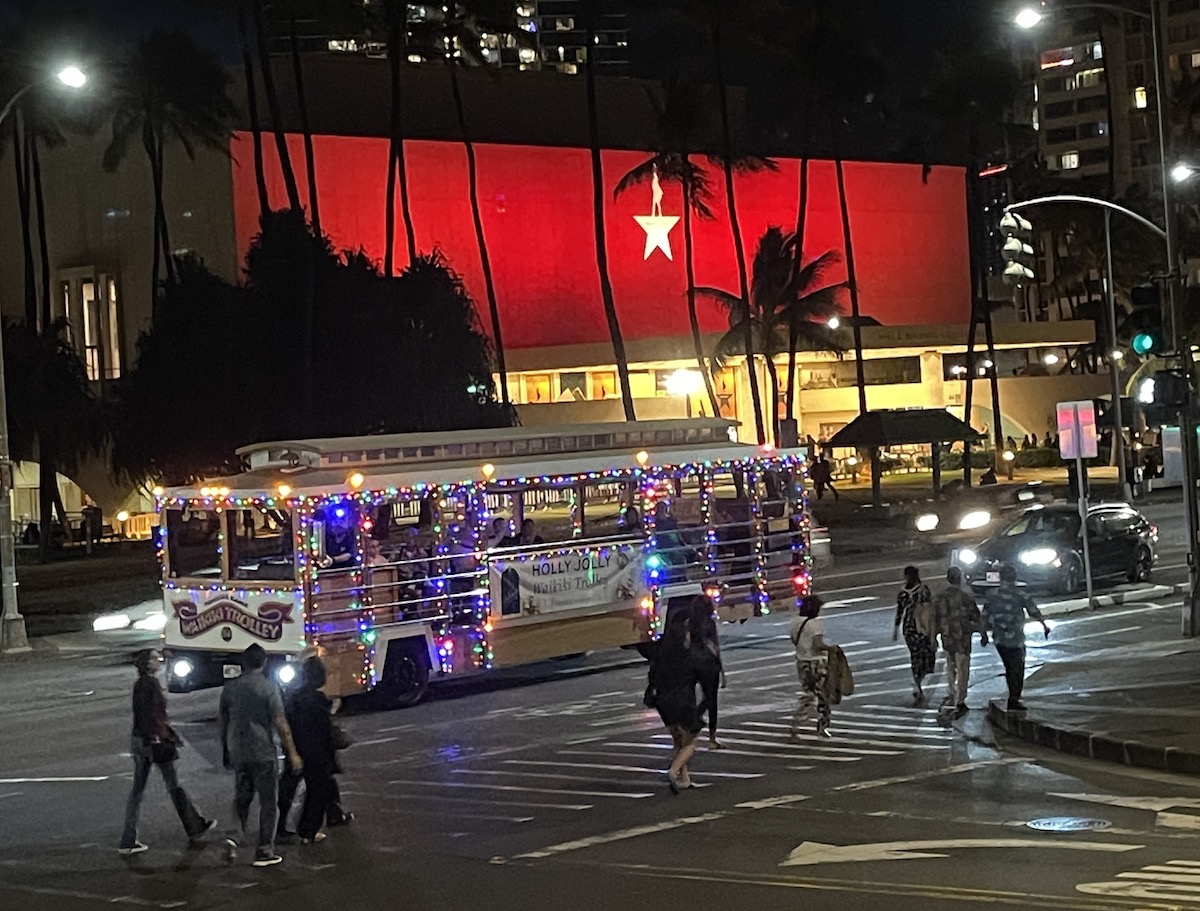 Hamilton tells a history-based story through a modern lens and includes some strong language. That means the official recommendation for audience members is ages 10 and older; children 4 and older are permitted but must have their own ticket; no infants are allowed.

This production runs 2 hours, 45 minutes, including one 20-minute intermission.

With colds, flu and viruses that include COVID-19 swirling around us, about 25% of the audience wore masks.

The renovated women’s restrooms help the lines move quickly, with staff nudging people along. The fastest-moving women’s bathroom queue is still at the Diamond Head-makai side of the concert hall. 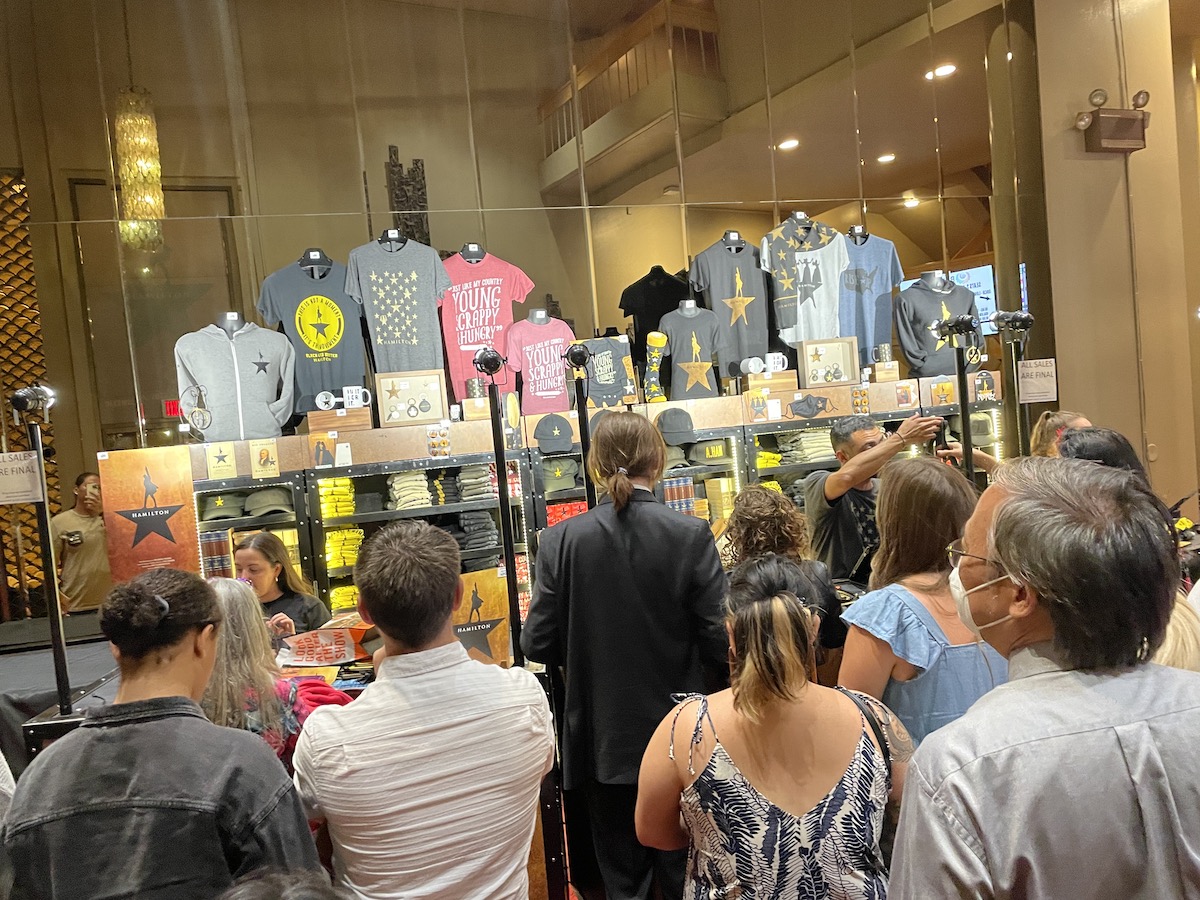 More than 30 minutes before the show began, the line was a dozen deep for people buying T-shirts, hoodies, mugs, hats and recordings in a huge array of Hamilton merchandise.

About 60 people work to make each show happen on stage and behind the scenes, including the managers, cast, support team and 25 crew members who run the show. It takes 13 53-foot trailers to move the show. There are more than 1,000 light cues and 350 lighting instruments.

On stage, there are more than 20 hidden prop boxes around the set. The fabric for the costumes was custom made in France and England. Yes, they call that light fabric Hamil-tan. The king’s wigs are made of yak hair. King George’s crown weighs 2.5 pounds and has a microphone hidden in it. There are 14 speakers hidden around the set so that the cast can hear the band playing.

The Broadway in Hawai‘i season concludes with that old favorite musical, Cats,  based on the poetry of T.S. Eliot, June 13–18, 2023. By then, we hope to hear what shows might next appear on our home stage.

Here’s a look at another Hamilton touring company in Sydney, Australia.