This year’s Restaurateurs of the Year, Olay Somsanith and Macy Khounkeo, share tastes of a long-overlooked cuisine. 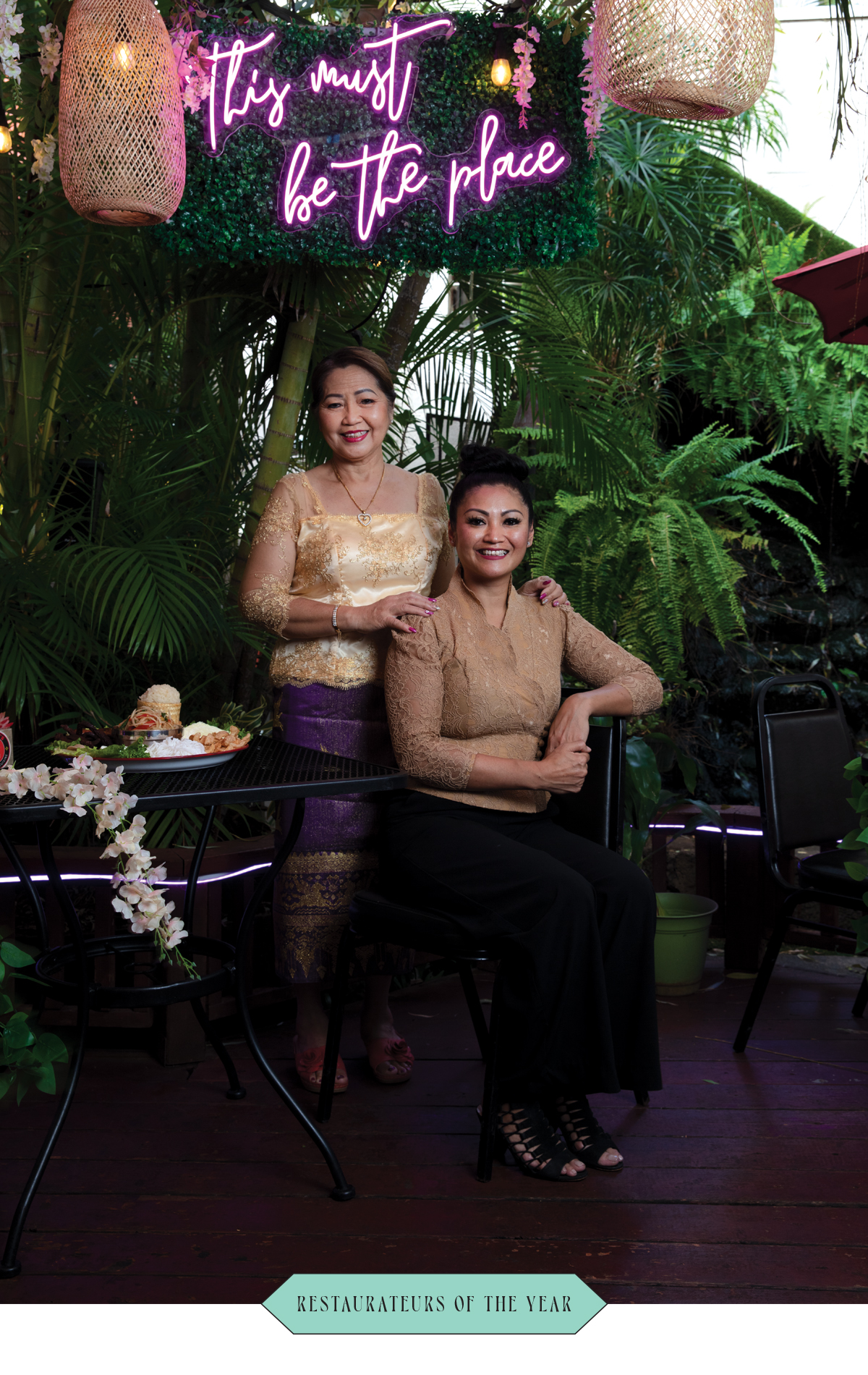 The menu at Olay’s Thai-Lao Cuisine mirrors Olay Somsanith’s life in professional kitchens: 60 Thai dishes up front, followed by 20 from her native Laos at the back. It’s not unusual for Honolulu’s Laotian cooks to spend decades cooking the pad thai, panang curries and other Thai dishes that have become part of the local dining vernacular. What is unusual is that amid Hotel Street’s gentrified eateries, Olay’s Thai-Lao gives marquee treatment to the Laotian home cooking and street foods closest to Somsanith’s heart; and that with her daughter, Olay’s owner Macy Khounkeo, she opened this restaurant as the capstone of a multifaceted and growing Thai-Lao food business at age 63. The achievements make Somsanith and Khounkeo the first mother-daughter team awarded the only Hale ‘Aina prize decided this year not by readers’ votes, but by a unanimous decision by HONOLULU Magazine editors: the 2022 Restaurateurs of the Year.

Somsanith’s cooking résumé reads like a who’s who of Honolulu’s top Thai eateries going back 15 years: Keo’s Thai Cuisine, Keoni by Keo’s, Ploi Thai, Siam Garden, Maile’s Thai Bistro. All but Siam Garden were opened by Laotians. Sticky rice is not Thai, Somsanith says, smiling gently at my surprise; it’s a Laotian staple. It’s an inkling of how intertwined the two cuisines have become—Laotian dishes like laab and green papaya salad crossing the Mekong River with generations of Laotian migrants and making their way to Bangkok and into the Thai lexicon; their funkier, saltier Laotian profiles tempered to suit Thai tastes. Then Somsanith begins talking about her own path out of Laos.

Her first memory of food is watching her mother making kapoon, a Laotian curry noodle soup: hands grinding lemongrass, galangal and makrut lime leaves with mortar and pestle; boiling catfish or tilapia from the nearby Mekong; pouring the rich soup over fresh rice noodles and chopping cabbage, long beans and banana blossoms for the toppings. As the Vietnam War escalated, close enough that they could see bombs falling, Somsanith and her brother sold bowls of kapoon to help support their family of 13. Then, an arranged marriage at 18. Her husband fleeing Laos and its new Communist regime. Discovering she was pregnant. Her baby dying. Swimming across the Mekong to reunite with her husband in a Thai refugee camp. Resettling in the United States. 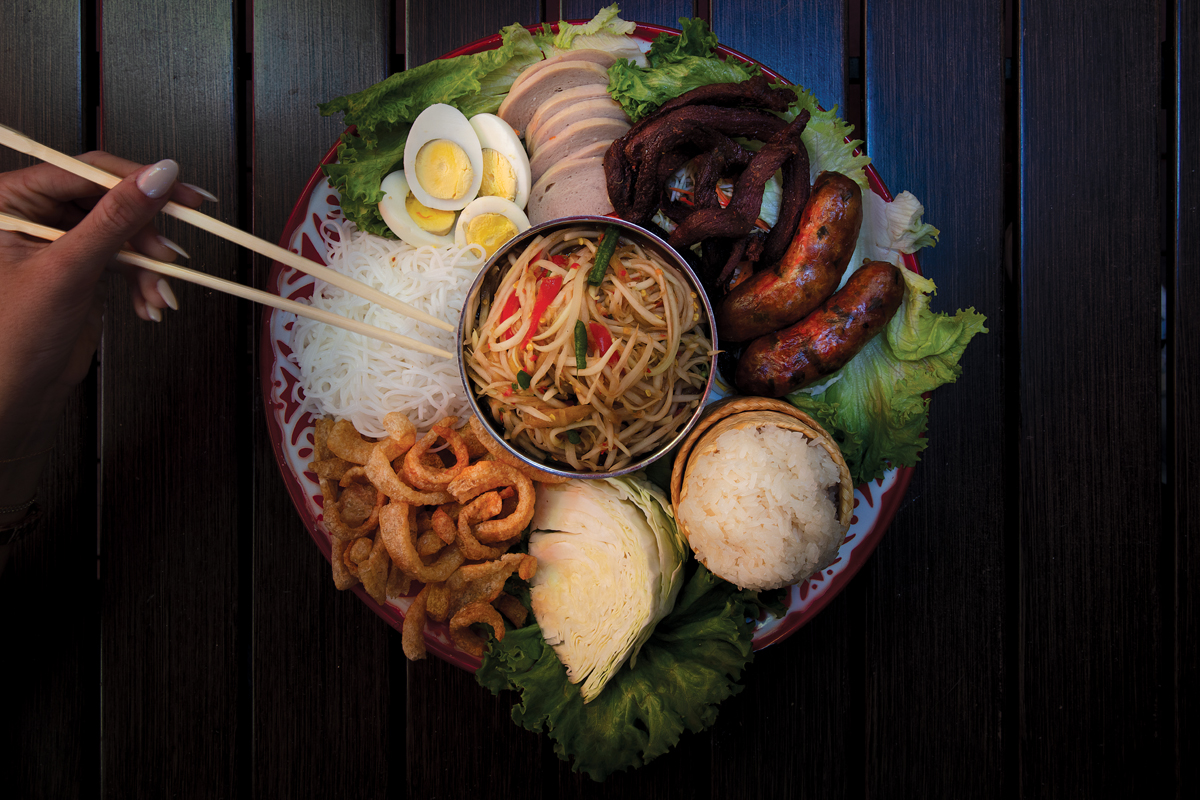 Delivered in her soft-spoken Laotian, with Khounkeo translating, the magnitude and tenacity of Somsanith’s story—crossing borders and picking herself up again and again—seem incongruous as we sit by a willow-shaded koi pond in the courtyard of their restaurant. Parts of it are new even to Khounkeo. The third of Somsanith’s five surviving children and her only daughter, Khounkeo was born in Fresno, California, in the ’80s to parents who farmed vegetables and worked in factories. After Khounkeo’s father died and Somsanith remarried, the family moved to Hawai‘i and started over again. This time the path was entrepreneurial, beginning at the swap meet where Somsanith sold vegetables she bought from small farmers, and ending with her own Ba-Le Sandwich Shop franchise near Costco in Salt Lake. That hard-earned triumph lasted until Costco moved to Iwilei in 2002. The dried-up foot traffic led her to close her shop and cook full-time in other people’s restaurants. By this point the story is empathetically exhausting, but here’s where it turns. Somsanith used her days off at Maile’s Thai Bistro to launch Olay’s Thai at farmers markets. It was a family affair, with Somsanith’s husband and younger sons helping out at the Kaiser High School PTSA market on Tuesdays, Windward Mall on Wednesdays, and St. Clement’s in Makiki on Thursdays. Sensing the potential, Khounkeo quit her job as a cocktail waitress at the MGM Grand and flew home from Las Vegas. That move would decide her mother’s legacy.

“She thought about it in previous years, but she didn’t have the courage. I told her everyone wants explorations of the palate. Your Thai food sells, I think Lao food will sell too.”

In the early 2010s it wasn’t only farmers markets that were taking off. The culture of food trucks that swept the country was spawning local events like Eat the Street and Honolulu Night Market. Khounkeo anchored her mother’s expansion by opening Olay’s Thai Express in Hālawa, a mini-restaurant that doubled as a central kitchen. At street festivals and farmers markets, the sight of Olay’s Thai pumpkin curry and basil chicken, drunken noodles and stuffed chicken wings became ubiquitous. “I just knew her stuff sells, and I’m a huge believer,” Khounkeo says. “We went everywhere. We’re still going everywhere.”

When it came to Laotian food, the millennial Khounkeo bore none of the shackles of her parents’ generation. In Thailand, emigrants from socialist, less developed Laos often face widespread discrimination. And in Honolulu, where much of the populace can sit down at a neighborhood Thai eatery and confidently order a curry and pad thai, almost no one can name a single Laotian dish. Sai oua, nam khao, tom khem: For Khounkeo there was no reason why the fried sausages of lightly fermented pork and lemongrass, crispy rice salads tossed with fresh herbs, and sweet-salty braise of pork belly and eggs shouldn’t feature as prominently as Thai cuisine. The discussion came to the fore when Khounkeo and her mother started eyeing locations for a flagship restaurant. “She thought about it in previous years, but she didn’t have the courage. I told her everyone wants explorations of the palate. Your Thai food sells, I think Lao food will sell too,” Khounkeo says. “I kept telling her, pushing it to her, giving her the idea: Let’s do it. It’s good stuff. People need to know what it is.” 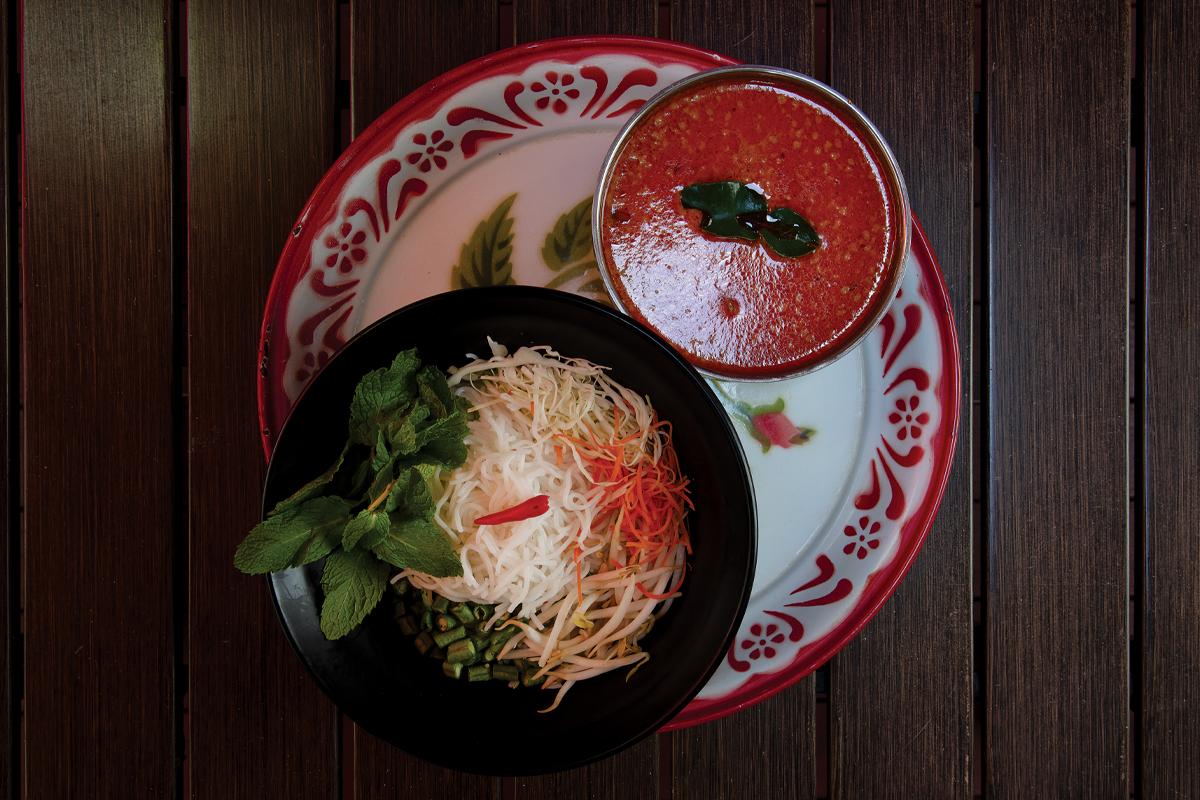 That’s how the 80-seat eatery, originally envisioned as Olay’s Thai Cuisine, got its Laotian identity. For the first time since she started cooking professionally, Olay’s Thai-Lao Cuisine lets Somsanith point her culinary compass to her own true north. Nor is the Laotian menu mostly easy gateway dishes like the sausages and crispy rice salad. Guided largely by Khounkeo,  based on her childhood favorites, it features dishes like gaeng nor mai, a deeply earthy bamboo stew that for most is an acquired taste. Two and a half years after opening in March 2020, Thai pad thai is still the top seller. But it’s the menu’s Laotian pad thai, or kua mee lao—layered with notes of dark soy, palm sugar and oyster sauce under a spritz of fresh lemon—that I like better.

Roll With It: Peruvian Street Food from El Gallo in Kaka‘ako