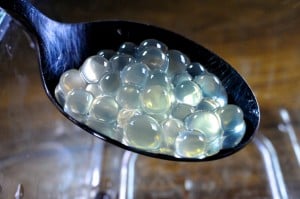 The fall semester recently started, which means that the University of Hawaii at Hilo’s apiary program is harvesting honey from the College of Agriculture’s beehives.

This is the second year of Chef Alan Wong’s Adopt-A-Beehive program, and I didn’t hesitate to opt in when it came time to make another donation.

I received my first honey delivery of the growing season this week, which instantly got my creative juices going. The question arose again, what can I do with this honey. I wanted to make something that would highlight the flavor of the honey, and the best way to do that would be by not messing with it too much.

I decided to play around a bit with molecular gastronomy and make honey caviar. This is done through a process called spherification, which involves dropping liquid mixed with sodium alginate into a calcium bath. The resulting chemical reaction creates an edible gel membrane that encapsulates a liquid center similar to caviar.

I tend not to trust recipes from cookbooks and the Internet, preferring instead to adjust one of my proven recipes. However, this being my first attempt at molecular gastronomy, I had no recipes to draw upon.

I found a simple recipe online, and as expected, ran in to several problems not listed on the site. The first being that my first batch instantly gelled. The resulting mixture was so thick that air bubbles emerged when mixing it.

I eventually realized that the culprit was the tap water that I mixed with the sodium alginate. The old pipes in my house no doubt had some calcium deposits that contaminated the water. I made another batch with bottled water, and that solved the problem.