University of Hawai‘i graduate students create their own visions of some iconic plays in Hawai‘i Nō Ka ‘Oi: An Edward Sakamoto Tribute.

Edward Sakamoto with images of two of his past productions. Image: Courtesy of UH Mānoa Kennedy Theatre

He began his playwrighting journey as a student at UH Mānoa, staging In the Alley there in the 1961—62 season. In the decades to come, Edward Sakamoto wrote 19 plays capturing the real voices of Hawai‘i families. In February, his alma mater will pay tribute to him with Hawai‘i Nō Ka ‘Oi: An Edward Sakamoto Tribute, which will be staged in the intimate black box Earle Ernst Lab Theatre Thursday, Feb. 24, through Sunday, Feb. 27. Tickets are on sale now.

My introduction to Sakamoto’s work was as a wardrobe dresser for the vast cast in the 1994 world premiere of Our Hearts Were Touched With Fire at UH’s Kennedy Theatre, the story of the U.S. Army’s 100th Battalion and 442nd Regimental Combat Team. He spent years researching the war drama that spanned years and oceans while remaining grounded in the pride and emotional conflicts faced by local families. But much of the ‘Iolani graduate’s plays over the decades were comedies and family dramas, written on the mainland where he worked as a journalist and copy editor but still maintained the true character and dialogue of local people. 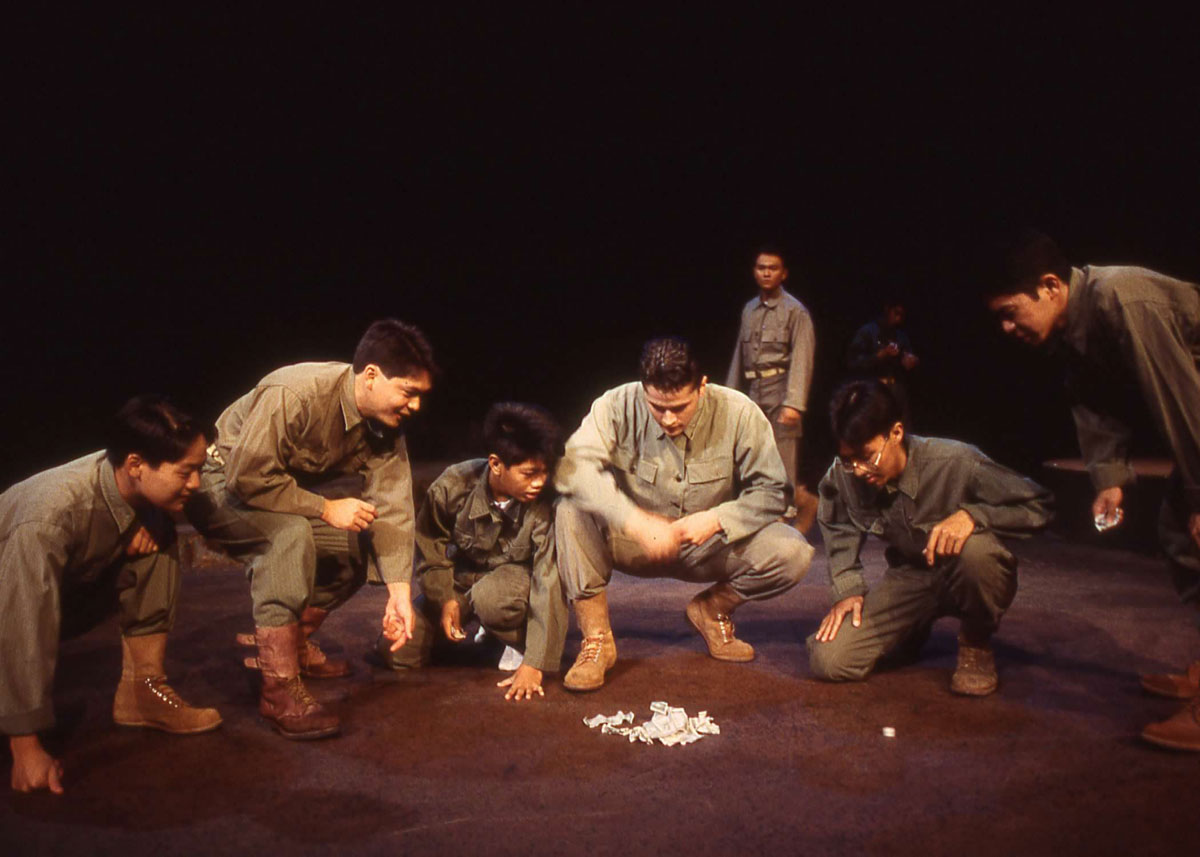 After he died in 2015, his entire collection of plays was given to UH Mānoa’s Department of Theatre and Dance. So, what to do with such a gift? When associate professor Tammy Haili‘ōpua Baker looked at the scripts—which took audiences from 17th-century Japanese forests to World War II battlefields to 1970s high school reunions in Honolulu—deciding which to produce first was the challenge.

Then the Hawaiian Theatre Program Director turned to her graduate students, challenging them to create their own visions of Sakamoto’s voice. Each of her seven students—three studying Hawaiian theater, three focusing on directing and one in Asian performance—read the plays and selected the ones they connected with most. Only about half of them had ever experienced his work before.

“It ended up being a really exciting opportunity, I think, and an exercise in looking at a particular playwright and going deep on their work, and then selecting scenes to do,” Baker says. “The interesting thing with Sakamoto’s work is that there isn’t always marked scenes. Something will go on for 30 pages. So that was another exercise for the students to be able to select a comprehensive moment that can stand alone, to tell this story.” 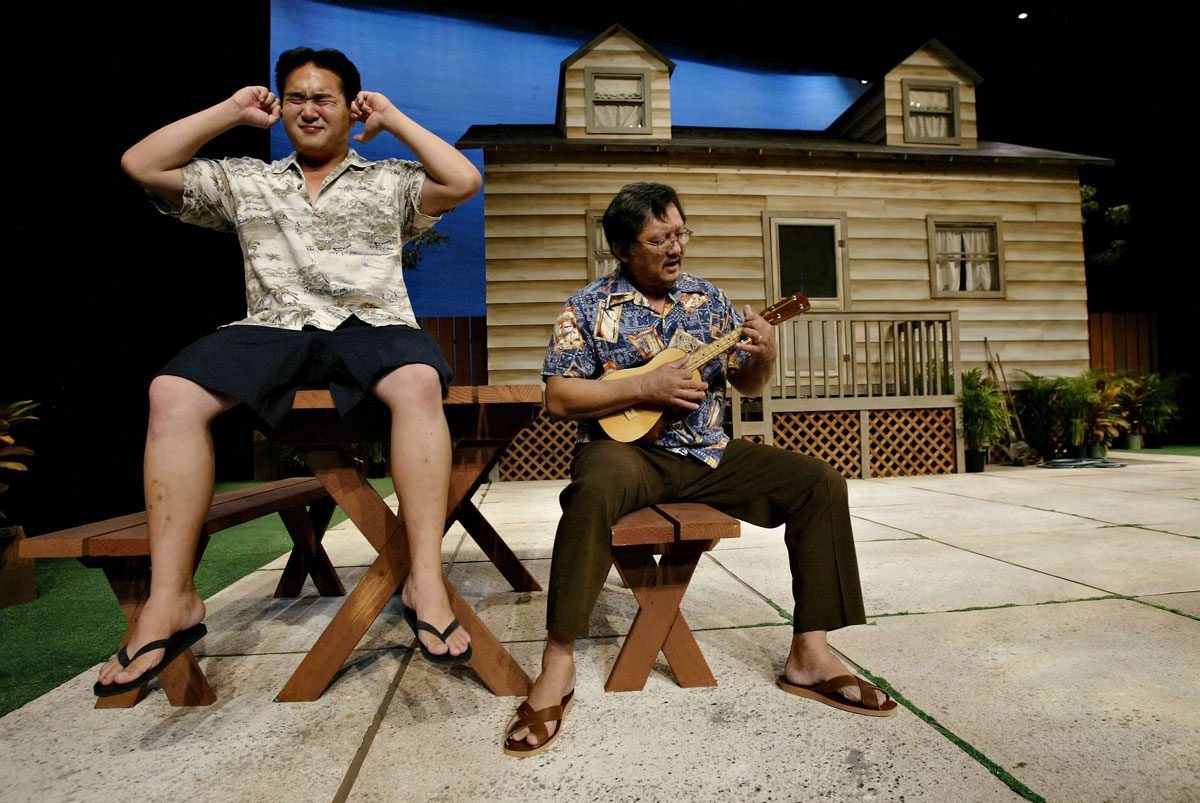 And each will tell it in their own style. Obake and Chikamatsu’s Forest will incorporate stylized movement, fitting for a story focused on 17th-century bunraku and kabuki playwright Chikamatsu Monzaemon. Lava will feature puppets in an even more abstract form of one of Sakamoto’s more surreal writings. During auditions, actors went through a series of stations so directors could see how they moved and whether they could portray various ages, and even checked their fluency in Pidgin, for scenes from Stew Rice and the Hawai‘i Nō Ka ‘Oi trilogy.

SEE ALSO: Pidgin 102: Who Should Be Allowed to Speak Pidgin in Hawai‘i?

“We had a really awesome two-day rehearsal audition process and we had some amazing people come out,” Baker says. “So, Dann Seki came out. Alan Okubo came out. All of the legends came out and so they’re cast in the show.

“It was so fun. [Seki’s] done how many Edward Sakamoto plays. Just about everything that Kumu Kahua has put up, he has been part of it. But he was very interested in Chikamatsu’s Forest, ’cause he has never performed in that. And he’s Chikamatsu. Everything aligned. The stars are aligned.”

Members of the new Edward Sakamoto Advisory Board, which was created to help preserve the playwright’s works, saw a preview of the work and gave their feedback. When we spoke, Baker was also hoping to use Sakamoto’s own words from a 2013 visit to her class, which was captured on video, to pull the entire production together.

It’s a tribute to a humble man Baker believes would have said no need. But she hopes the show will inspire others to dig back into his work.

“As a former recipient of the Masako Sakamoto Scholarship that he had set up in his mother’s name, you know, it’s my way of giving back,” she says. “That’s the whole idea behind all of this work is to honor the person that helped to make my education possible and inspired me as a playwright and carved that path for us. So we felt validated that yes, we can do things in Pidgin. As a girl who grew up in Kapa‘a on Kaua‘i, that was my first language.”