A new chef, new partners and a new menu usher in a serious glow up for the iconic Lahaina farm-to-table destination. 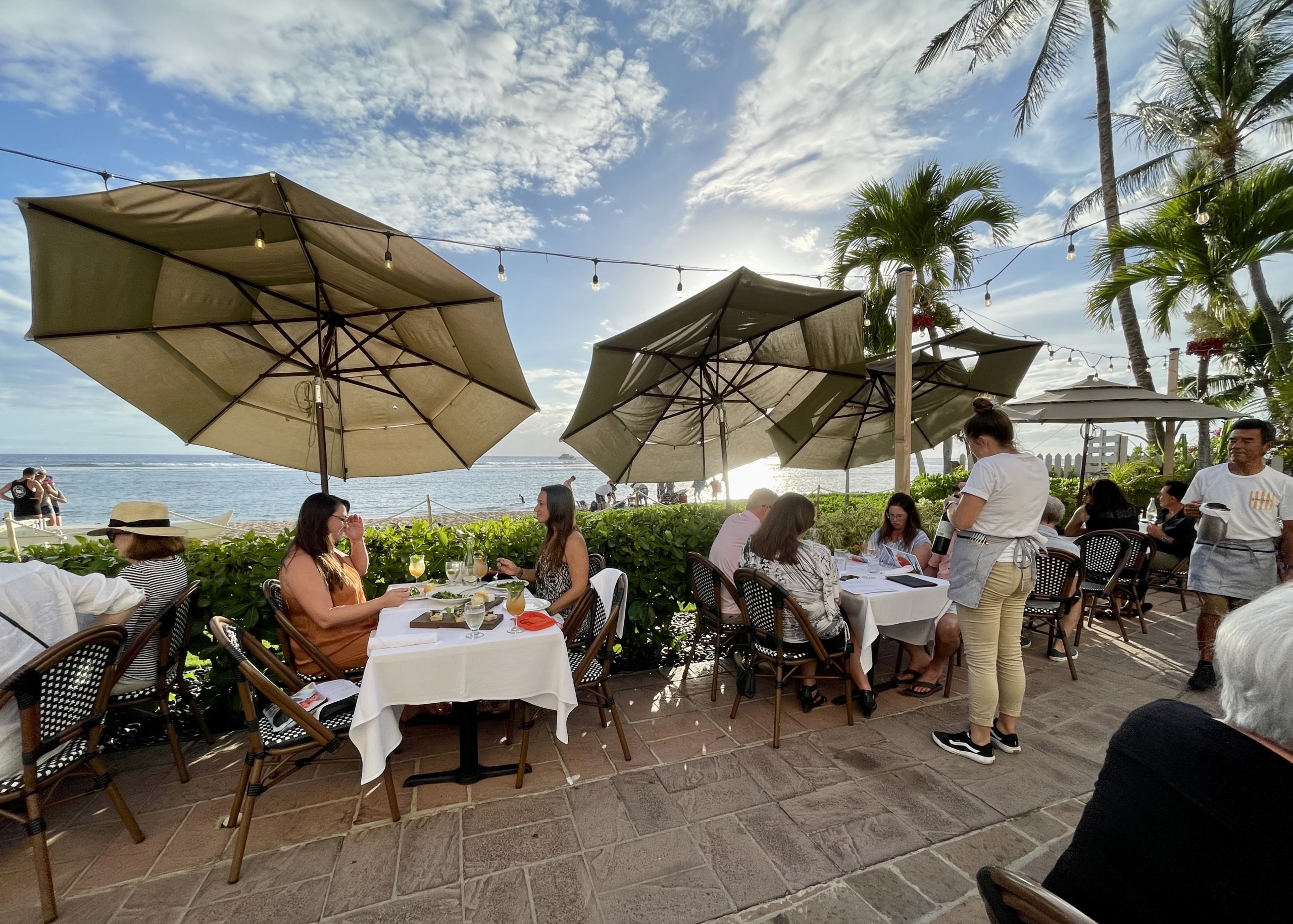 I was planning a trip to Maui when I got some exciting news. Maui native Isaac Bancaco was just named executive chef of Pacific’o on the Beach, a fixture of Lahaina’s fine-dining scene. I’ve kept up with Bancaco on Instagram, wondering when and where he would root himself following stints at Andaz Wailea’s Ka‘ana Kitchen and Grand Wailea’s Humuhumunukunukuapua‘a. I now had my answer and it felt a bit serendipitous. So when the restaurant invited me to check out the new dinner menu, I arrived with bells on.

Nearly 30 years after opening on Front Street, Pacific’o is still one of the only restaurants in Hawai‘i with its own farm. About 25 miles away in Upcountry, O‘o Farm grows over 50 crops that appear on Pacific’o’s seasonal menus—including fruits, vegetables, eggs, flowers, coffee beans, olive oil and tea. While the restaurant is still owned by Louis Coulombe, Michele and Qiana Di Bari of nearby Sale Pepe Pizzeria e Cucina have signed on as managing partners. The broad revitalization also includes new furnishings, and the new vibe is palpable.

SEE ALSO: Qiana Di Bari, Owner of Sale Pepe in Lahaina, on Why She Feels At Home on Maui 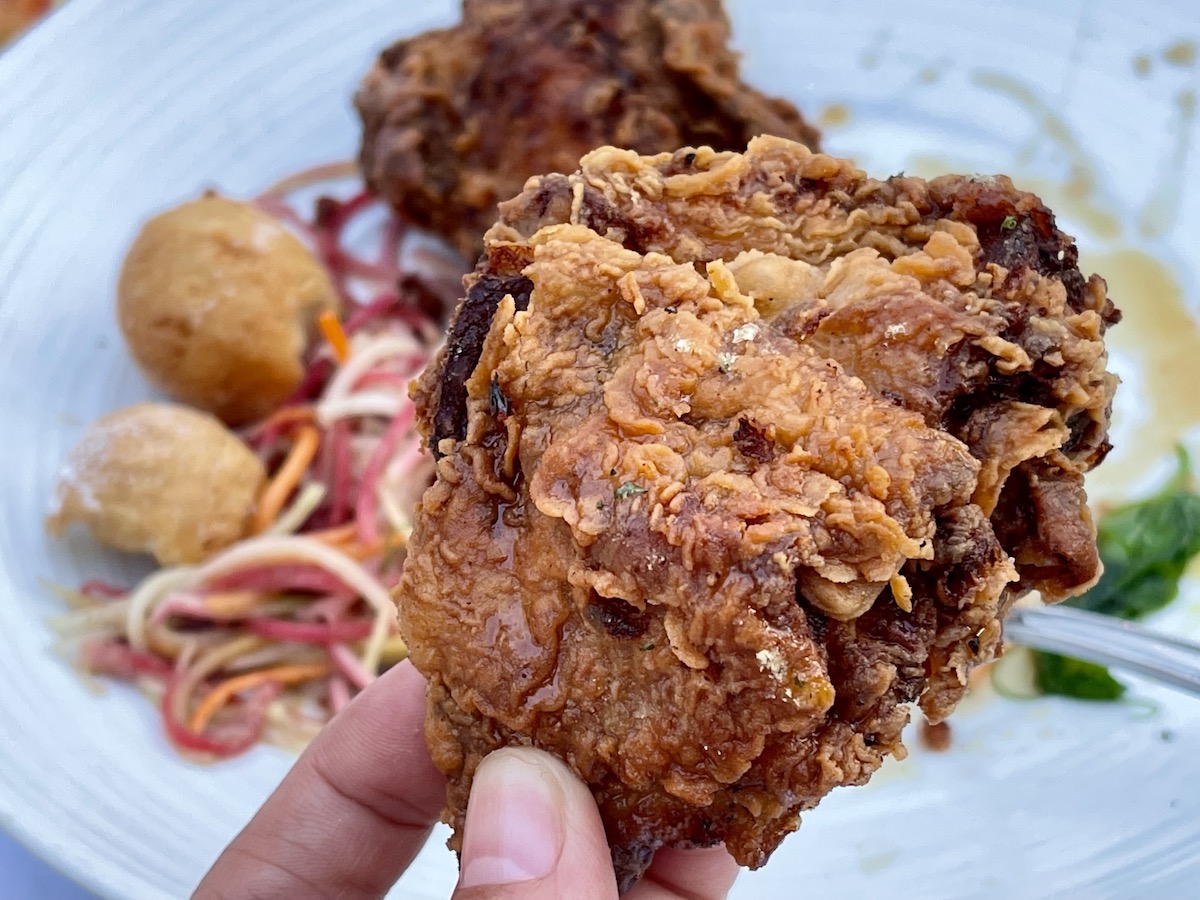 As the sun begins to set, we start off with some pūpū: Hawaiian brioche with Upcountry honey butter ($12), hen mousse spread on focaccia slices with browned butter and caper berries ($18), a kale Caesar salad with pickled fennel ($16) and brussels sprouts with smoked wild boar and an IPA vinaigrette ($17). Our favorites are the decadent mousse, hints of brandy in a unique balance with the juicy acid of plump caper berries; the Caesar with its lingering tang of pickled fennel laced with anise and sweet golden raisins; and the brussels sprouts with runaway leaves so crispy they almost melt into a pool of rendered boar fat and vinaigrette.

We’re still naming our favorites in roundtable fashion when entrées begin to arrive. I lunge for the plate of fried chicken and malassadas ($39); a crunchy amber thigh drizzled with chile-maple sauce is my prize. The chicken is cooked perfectly—juicy, flavorful meat is encased in crusty skin, with the sauce adding a sweet and savory juxtaposition. The malassadas are slightly undercooked and the slaw could use bit more acid, but next to this chicken, not much has a chance of standing out anyway. 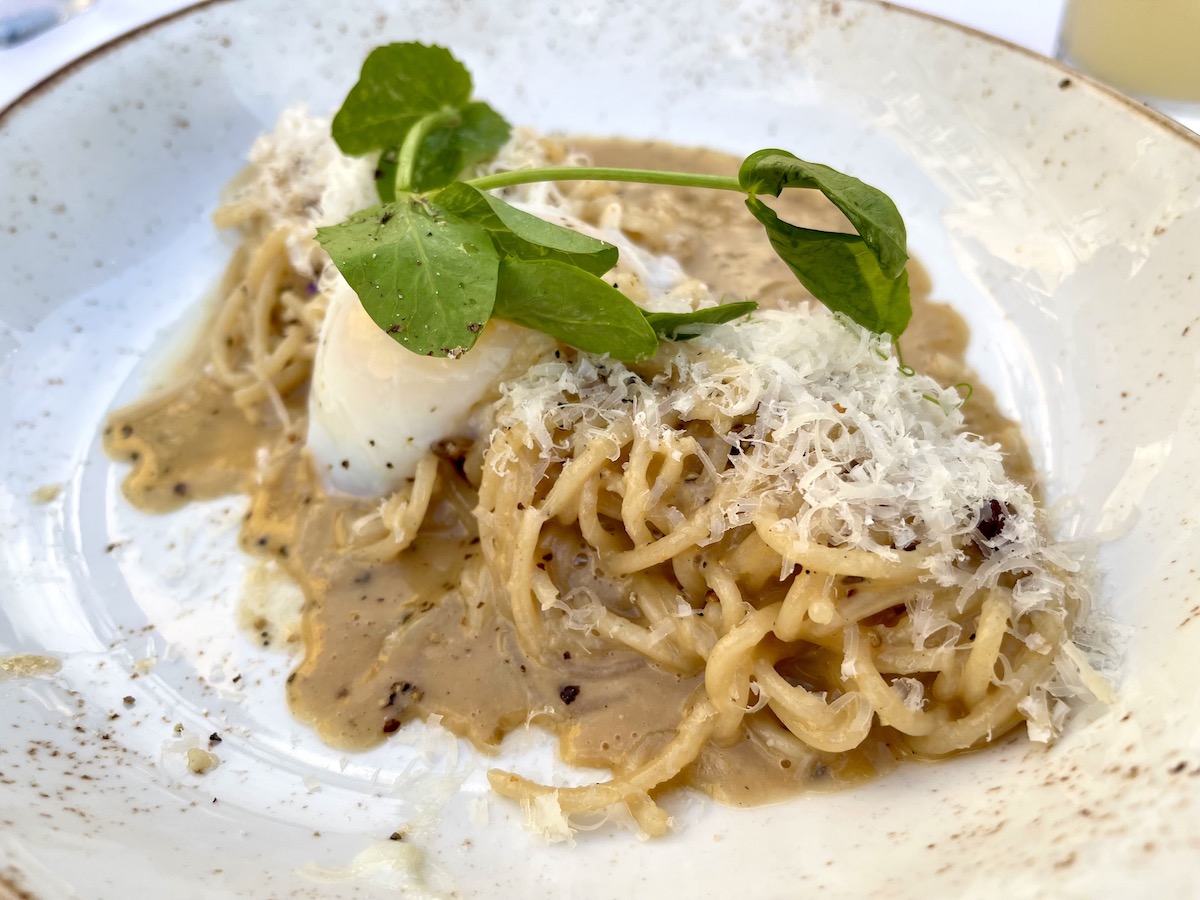 We’re ramping up to a crescendo with the next dish: cacio e pepe with miso topped with an O‘o Farm egg. The pasta is Sale Pepe’s fresh Bu‘ono pasta cooked al dente, the strands grabbing onto the yolk and melting the Parmesan sprinkled on top—a smart decision that strays from the usual pecorino Romano, given the added salt from the miso. Bancaco has kept the traditional pasta dish recognizable while adding this extra layer of umami that possesses me to not stop eating it until the plate is nothing more than a puddle of sauce asking to be sopped up with a brioche roll.

SEE ALSO: Lee Anne Wong Dishes About the Overhaul of Her Pioneer Inn Grill and Bar on Maui 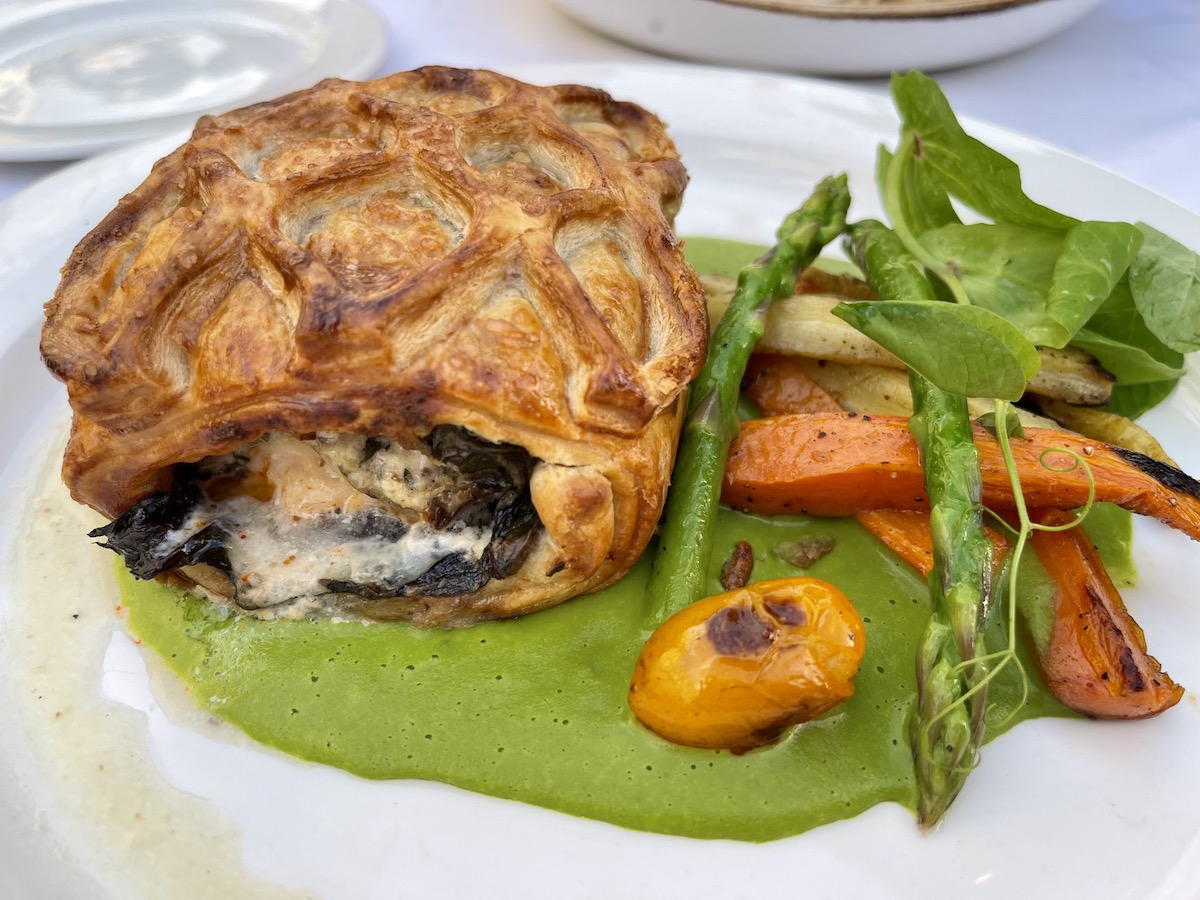 Now, to be frank I’m not really a fan of cooked fish. When ordered in a restaurant it often arrives a bit dry and leaves me with regrets. But I go for the mahi mahi Wellington ($59). Both are laborious to prepare and challenging to cook. Any kind of Wellington is a display of skill and in this case, of the kind of twists on local cuisine that Bancaco is known for. Mahi and lobster tail are swathed in lū‘au leaves and mushroom duxelles before being swaddled in flaky puff pastry. A green pea emulsion offers creaminess to each layered bite. This dish feels like a handwritten love letter to my favorite white fish. 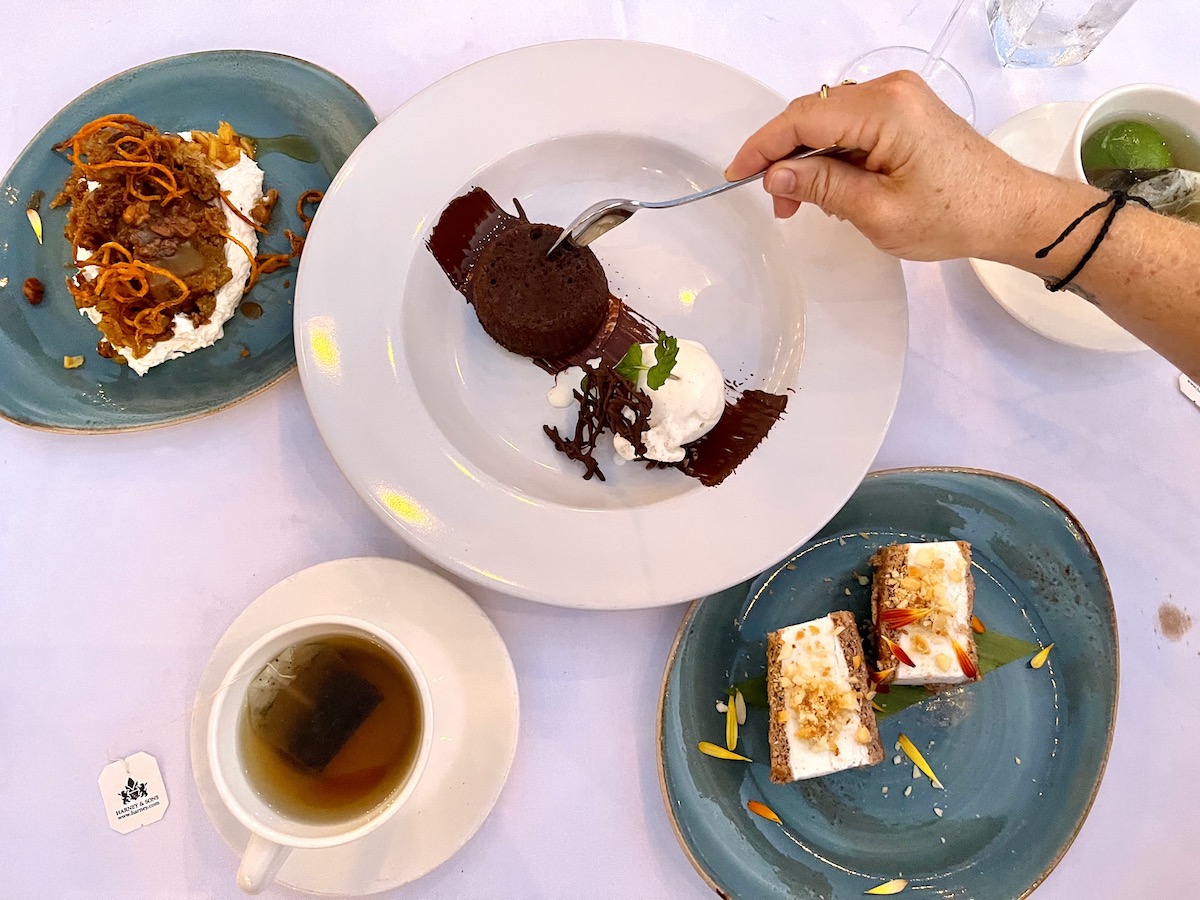 By dessert time I’m craving chocolate, so I order the avocado lava cake ($16). My companions go for the banana bread ice cream sandwich ($14) and the carrot cake ($15). The lava cake surpasses other lava cakes, deeply chocolatey with the avocado lending a lightness to the cake. The rest of the table falls hard for the carrot cake, deconstructed as if you got the best leftovers from home. Moist chunks of spiced carrot cake join carrot spirals, candied walnuts and caramelized pineapple on a cloud of fluffy cream cheese frosting dotted with flecks of vanilla bean.

I’m excited to see Bancaco back in the spotlight at a busy spot (Pacific’o serves more than 200 diners a night) and within a restaurant culture that is tethered to local agriculture. Big moves have been made at Pacific’o, and it tastes like they’re already paying off.