Near the intersection of Kahuhipa and Alaloa streets, a diverse mix of businesses are tucked into two-story warehouses. 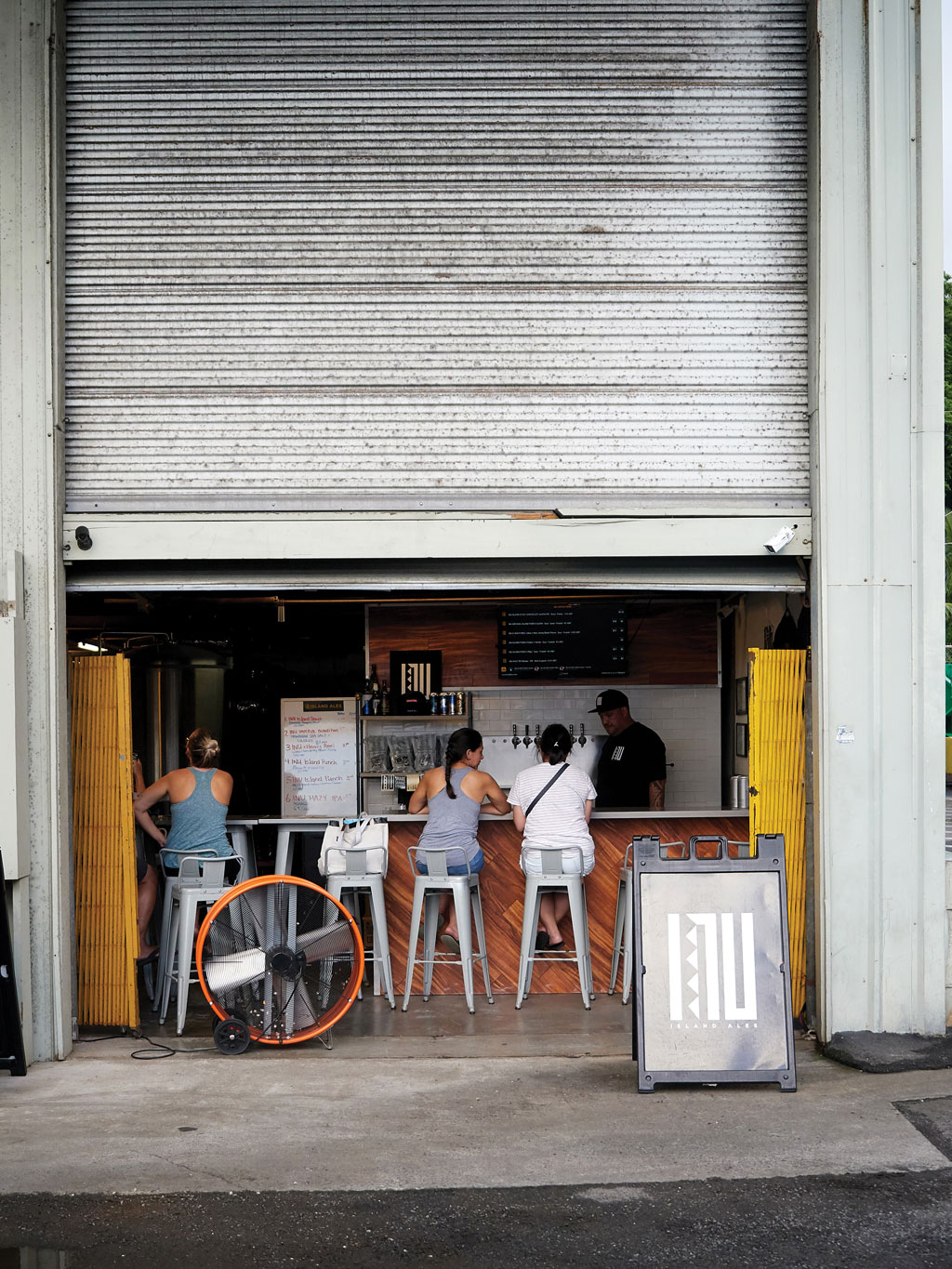 Inu Island Ales serves award-winning craft beer—inspired by local flavors from liliko‘i to chocolate haupia pie—made behind the roll-up doors of the brewery on Kāne‘ohe’s Kahuhipa Street. It’s in a community of hidden gems that folks might just drive past in this light-industrial area.

Near the intersection of Kahuhipa and Alaloa streets, a diverse mix of businesses are tucked into two-story warehouses: shops to repair transmissions and vacuum cleaners; schools; places to eat, print T-shirts and shop; amid the car dealerships that dominate the block. It’s easy to find somewhere to learn something. The street stays busy with cars pulling into and out of lots and unmetered parking along the curb. In late 2017, owner Keaka Eckart started Inu Island Ales (inu translates to “to drink” in Hawaiian) and the small business steadily drew a national/international reputation for its craft beer. It recently scored the highest brewery rating in the state on Untappd, an app designed for users to rank beers.

Inu feels laid-back, like the tasting room my brother’s coolest friend would run after surfing all morning, where you can bring your own food and always end up talking to the people on the next stool. “It’s a good mix, 50% locals and 50% visitors who come out to Kāne‘ohe,” Eckart says. That reputation means new releases of beers—announced on Instagram and Facebook—prompt lines and even a core group of about 30 who routinely sleep outside the door to be among the first to buy the latest brew. “We’ve had over 150 people in line for two to three hours,” Eckart says. Normally, the brewery sells its stouts only on tap at the brewery, except on release day: “That’s when we put it in bottles to go. That’s the day you get to take it home,” he explains.

The beers change by the week or month, with a playful mix of ingredients, names and styles. Two recent stouts could convince skeptics to savor a dark beer: Haole Brownie and Chocolate Haupia Pie. A PBJ Island Punch offered hints of peanut butter, jelly and graham crackers. The brewery usually has six flavors on tap that include: an IPA, a sour, a gose and a hazy along with a featured stout. Prices range from $3 to $6.25 (highest for the stout) for a small taster glass with a sassy warning: “Steal glass, catch cracks.” Pay $15 to $18 in takeaway 32-ounce “crowlers” canned while you wait.

There are enough stools in the place to seat about 20 but some people choose to stand while they talk and drink. Customers ebb and flow—sometimes there’s just a handful, other times every seat is filled—coming in after work for a quick drink, or staying to catch a ballgame on TV. One beer that keeps coming back is called Da Eastside Punch, with the bright red color and DNA of Hawaiian Punch brewed into a beer.

Eckart tells a customer a new beer is coming out this weekend. She replies: “Great, I’ll see you Sunday.”

What to Eat & Drink on the street Across the street, Nanko Fishing Supply lures customers with fishing and diving gear as well as snacks and cold drinks. Workers and customers of neighboring businesses have relied on Nanko’s for decades. It’s another example of how this neighborhood somehow successfully straddles an identity that supports both retro and hip.

Kai Terayama, 29, just took over officially as owner of the longtime family fishing supply/convenience store in October. He’s worked there a third of his life, but defers to two staffers helping customers shop for fishing rods and lures and a six-pack of Longboard bottles: “They’ve been here a lot longer.”

Now one of a handful of specialty fishing stores on O‘ahu, the store pulls in customers from across the island with a broad supply of neon lures, rods, reels, fishing tabi, masks, snorkels and spearfishing gear. The walls show the store’s place in the community: Hanging there are a mix of photos and paintings of the shop over the years, plus pictures of customers and the fish they caught with the gear they bought.

Spend an hour there and watch people of all ages drop in to buy juice, ice, soda, beer, ice cream and other quick bites, many on their way home from work or school and headed to nearby schools and businesses.

“It’s a little bit of everything,” Terayama says. “Bait is a big thing.” He notes that about a fourth of the customers are Marines, many from nearby Marine Corps Base Hawai‘i, drawn to the country-store comfort as well as the convenience. A Legacy of Hula

Some students stream in to Nanko to buy snacks, then cross the parking lot to learn hula at a hālau founded in 1963 by renowned kumu hula Aloha Dalire. Keolalaulani Hālau ‘Ōlapa O Laka is now run by her daughter, eighth-generation kumu Keola Dalire.

It’s a family-oriented atmosphere, with one of Keola Dalire’s daughters, still wearing her high school ID on a lanyard around her neck, among the dancers leading a keiki class. She guides her students gently. “It takes a community to raise a child,” the kumu says with an encouraging smile.

Dalire glides around the students, pausing to straighten a skirt and shift a child’s hips, all while reminding them to “push, push and hold your lines.”

Dalire and her sisters all won Miss Aloha Hula titles at the Merrie Monarch Festival and photos on the wall trace their hula history. She glows with pride in her family, hula and the community. “We’re deeply rooted in Kāne‘ohe,” Dalire says. “My family is part of the original Hawaiian settlers of Kāne‘ohe.” Her students now range in age from 3 to 70-something.

A few doors down, past the Stanley’s Sewing Machine & Vacuum Center that’s earned the reputation for reasonably priced repairs, Dalire’s “better half,” Byron Tagupa, runs a compact boutique. It’s a partner location of Hawai‘i’s Finest, a brightly designed aloha/urban clothing and accessory line that began with business partner Paulele Alcon in 2009 with a location in Honolulu and is still expanding. Tagupa opened the Kāne‘ohe shop with adult shirts, hats and some bags, all for between $20 and $50.

Tagupa says the location is catching on with folks who try to avoid crowded malls and like the style of the brand and its eye-catching logo. Tagupa explains the intent of the distinctive design of four blocky H’s, two standing, two sideways: “No matter which way you turn, you represent Hawai‘i.” A few doors away and across the street, past Willy’s Transmission, the sign on the first floor of the gray slatted warehouse simply says Kikuya Japanese Food. Inside there’s the homey feel of a neighborhood restaurant with long tables that can easily be pushed together to host a family gathering or business meeting.

Calvin Dang bought the restaurant nearly three years ago from the family that had run it since the 1980s. Dang was running a Ke‘eaumoku coffee shop when the owners reached out to say they were ready to retire and were looking for someone to buy the business.

Dang had earlier worked at Kikuya for a dozen years, so the previous owner offered to “teach me all the recipes and he would let me keep the name,” Dang says. Business was a little slow at first but has been picking up. Kikuya dishes up a complete meal that includes sashimi and tempura for less than $24. Photo: David Croxford

Folks walk in, find their usual seats, and many order from the specials board near the cash register, which often includes fried akule, butterfish and ‘ahi katsu. Also popular: complete meals that come with shrimp tempura, sashimi, miso soup, tsukemono, potato salad, tossed salad and rice with a choice of teri chicken, fried saba, salmon and katsu. At dinner meals cost $21 to $23 and at lunch closer to $16.

Dang says parking can be discouraging but he’s thankful for returning customers and those who find out about the restaurant from social media. “We have lots of local customers who drive from Wai‘anae or Kapolei to eat akule or the flounder.”

Brewery owner Keaka Eckart walks down the street for the classic old-style food for lunch. “I love it there. The food’s solid—better than your normal plate lunch plate. I like all the sides that they give you.”

Most of the businesses in the area have a few designated parking stalls out front but spaces do get tight, especially midday. Nanko’s shares a lot with the hālau, Hawai‘i’s Finest and the repair shop—and a rental car company recently took over a chunk of the lot. The lot by Inu has a friendly parking attendant directing traffic during daytime business hours. Otherwise, head for free street parking spaces, easier to snag later in the day.

This story originally appeared as “Field Guide: Kahuhipa Street” in the February 2020 issue of HONOLULU Magazine. Get your copy at shop.honolulumagazine.com and subscribe to the print and digital editions now.