Come for the Cubano sandwich, stay for the pitaya, mountain apple and poi seasonal papaya bowl.

On Saratoga Road just past Eggs ’n Things, Castro’s stands out against the Waikīkī landscape. A colorful interior and the rhythm of Latin music draw you into a small space that feels geared toward locals: no hula skirts or tropical paraphernalia here, just spice-filled jars, neon accents and other hints of the Cuban food that is Castro’s specialty.

The scent of espresso wafts across the patio as I study the menu. This is a breakfast and lunch spot, so there are selections of coffee, sandwiches, toasts, tamals and salads. I decide on a pair of classic sandwiches—the Cubano ($15) and the choripan ($16)—and the tamal with brisket ($16). The music, bold colors and promise of dishes rarely seen in Hawai‘i: At the edge of Waikīkī, I feel transported to the Caribbean.

“Oooh!” It’s a reflexive coo. My tamal has arrived quickly, and as the glass lid is lifted it releases smoke that clears to reveal a yellow parcel on a banana leaf topped with fall-apart brisket, herbs and vibrant pickled vegetables. Like the other tamals, I’m told, every element except the brisket is vegan. Made with organic corn and served with mushroom chimichurri, an insanely fresh and unctuous combination, the tamal is moist, flavorful and, eaten with bites of pickles and radishes, irresistible. 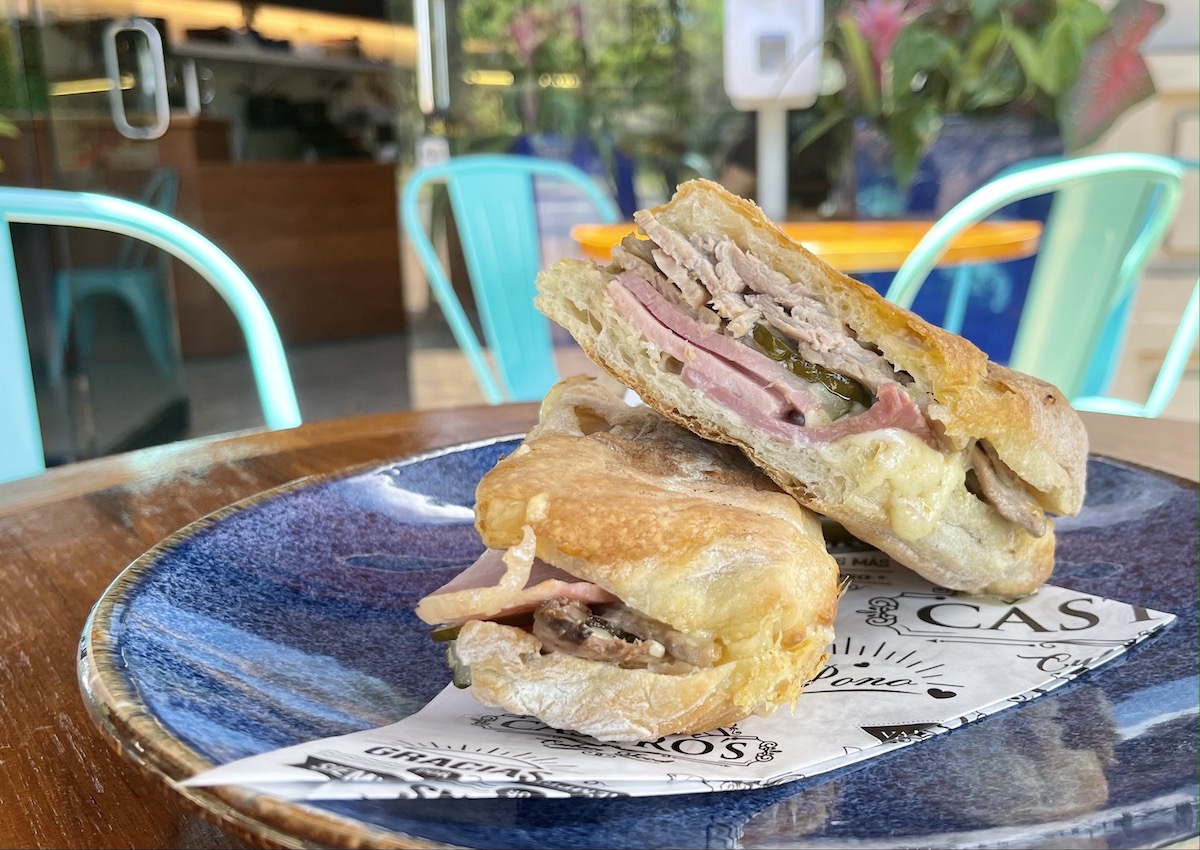 The Cubano arrives and immediately I notice the bread—it’s like ciabatta, but richer and clearly hand-formed. Toasty curves give way to sublime ratios of ham, roasted pork, sharp cheddar, garlic aioli, mustard and the sandwich’s signature pickles. It may look simple, but this is the best Cubano I’ve ever had. 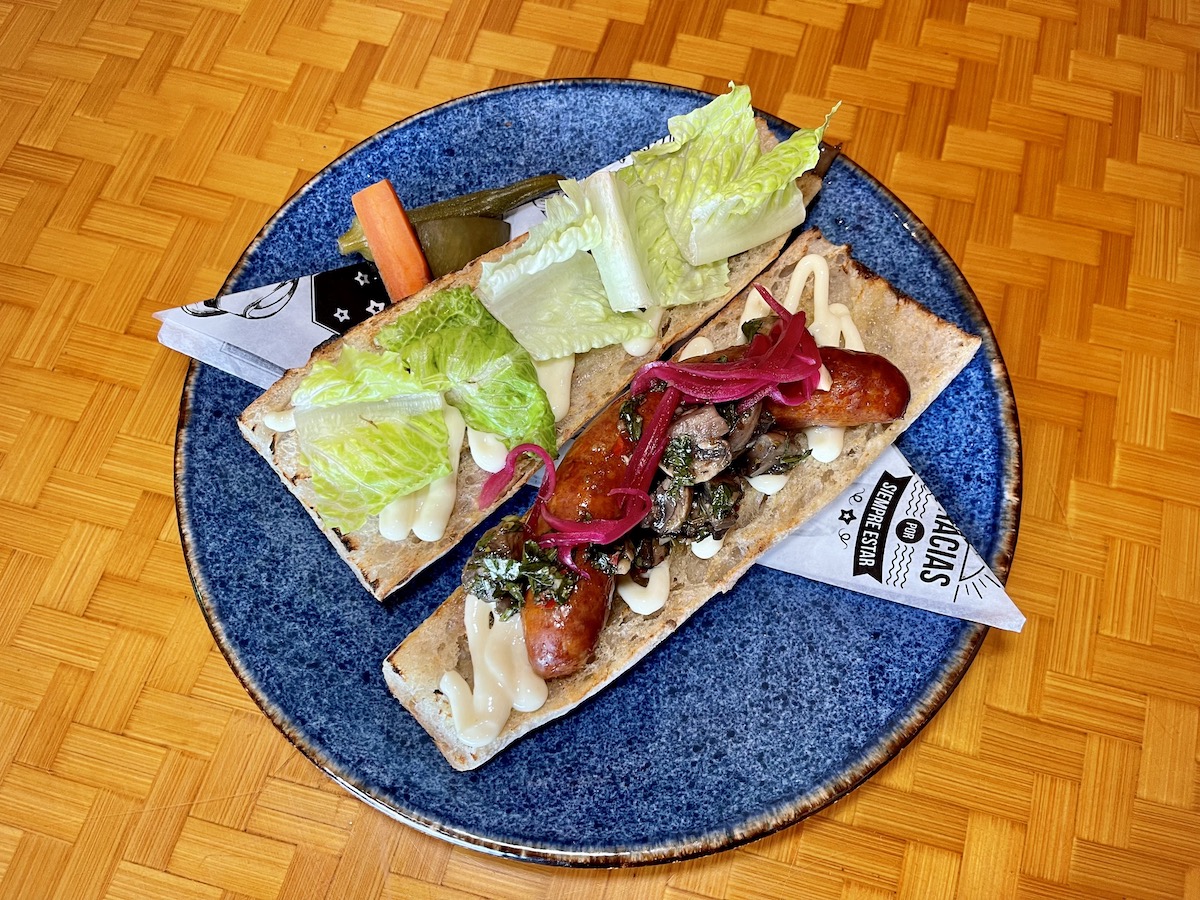 Choripan, a favorite from Spain to Mexico to Cuba, pairs Portuguese linguica sausage with pickled red onions and more garlic aioli on a French baguette with the magical mushroom chimichurri on the side. The sausage, bright and spicy, recalls rambunctious barbecues with friends and lots of beer. While I like the choripan, I prefer the Cubano’s proportion and abundance of ingredients. 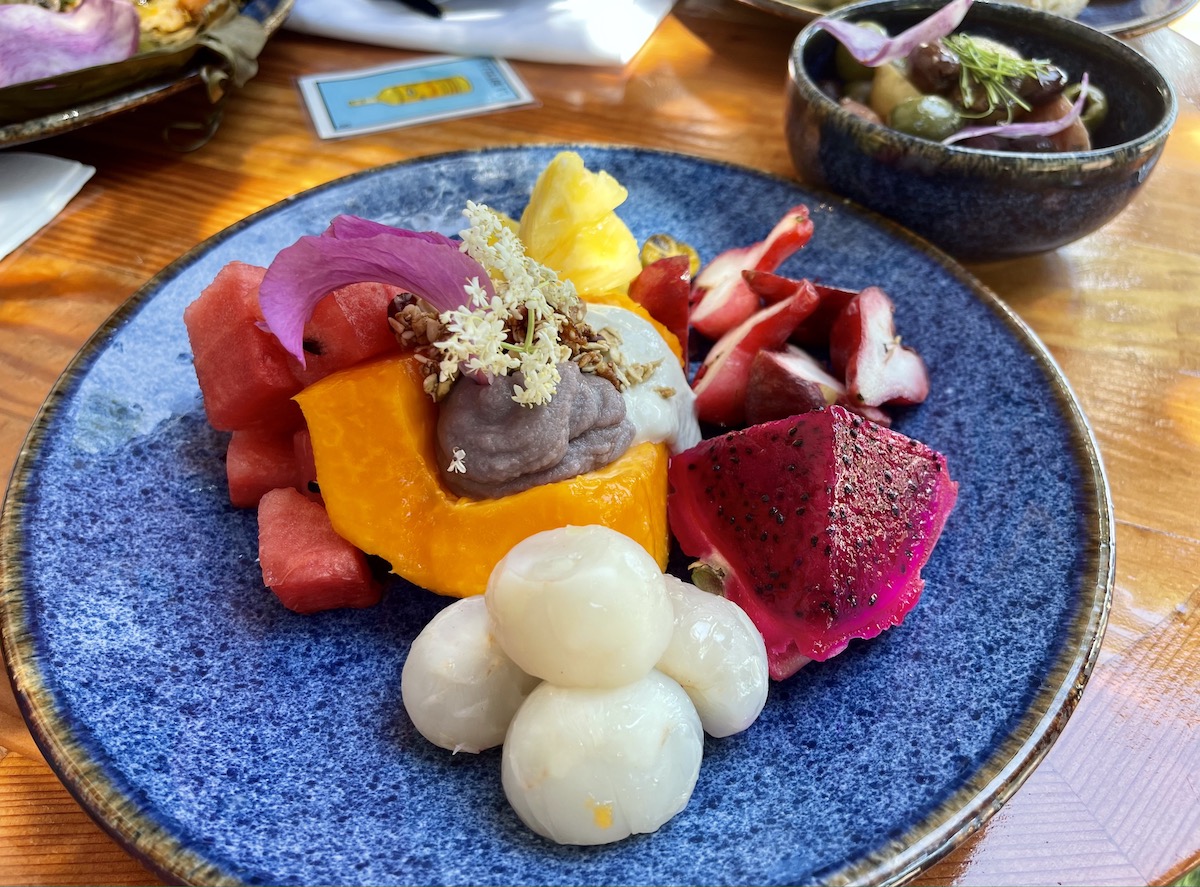 Realizing I’ve just eaten three meat dishes, I order the small size olive and potato salad ($6), vegan poke ($6), and papaya bowl ($14). Like everything else, they arrive quickly. I’m here on a mellow day; I hear that at times, the food can take 30 minutes. The salad and vegan poke bring balance to my meaty spread. But the papaya bowl is a show stopper: Gorgeous fuchsia pitaya shimmers next to mountain apples, peeled lychee, pineapple, watermelon, and a papaya cup filled with poi and coconut cream and topped with local elderflower blossoms. I can’t think of anywhere else you can get such a farmers market/backyard bounty of seasonal local fruits for breakfast, dessert or just because it’s Tuesday.

The totality of food and experience has me floored. I seek out our server—it turns out she is the chef’s wife. Chadley Jacobson and Luis Castro arrived in Hawai‘i six years ago, she helping to manage and create the bar program at the Hideout at the Laylow and he working in the kitchens of the Sheraton Princess Ka‘iulani. Castro’s resume rose from there: to Morimoto Waikīkī at The Modern Honolulu, to Stripsteak Waikīkī, to Morimoto Asia and Momosan, where he was executive sous chef. The pandemic spurred the couple to open their own restaurant, and since the Colombian-born Castro loved the flavors of Cuba, its cuisine was a natural choice. Ninety percent of ingredients are sourced locally, Jacobson tells me, most of them from family-owned farms. Bread comes from Bread Lounge, an artisan bakery in Los Angeles, and is finished in Castro’s oven. Items like black beans and corn come from Masienda, a fair-trade-focused business that works with small farming communities to preserve single-origin heirloom corn and bean varieties.

The plates are beautiful and the philosophy behind them easy to support, but the bottom line is Castro’s serves straight-up, delicious soul food. That’s why you’ll find me on Saratoga Road.