Need more ideas for your mischievous elf? From disco parties and “elfies” to zip lining, we round up more than 20 of our favorite elf scenes.

It’s not truly the holiday season until two new friends show up in our house; our elves Olivia and Oliver. They show up every year on Dec. 1 without fail. In case you didn’t know the background, a mom and daughter created the book The Elf on the Shelf, which comes in a gift set with an elf doll, in 2005. Since then, the practice of surprising kids with elf appearances at home has become a cherished part of the holidays for many. Michele Aucello’s annual journal of her family’s Elf on the Shelf escapades inspired me to start the tradition with my husband and then 4-year-old daughter. After five years, it can be challenging for the mischievous little friends to find new places to hide. (I’ve been up late many nights trying to help them out.) So, we put together some of our favorite moments to use as inspiration. Do you have a great elf moment? Email us at info@honolulufamily.com for us to share. Enjoy! 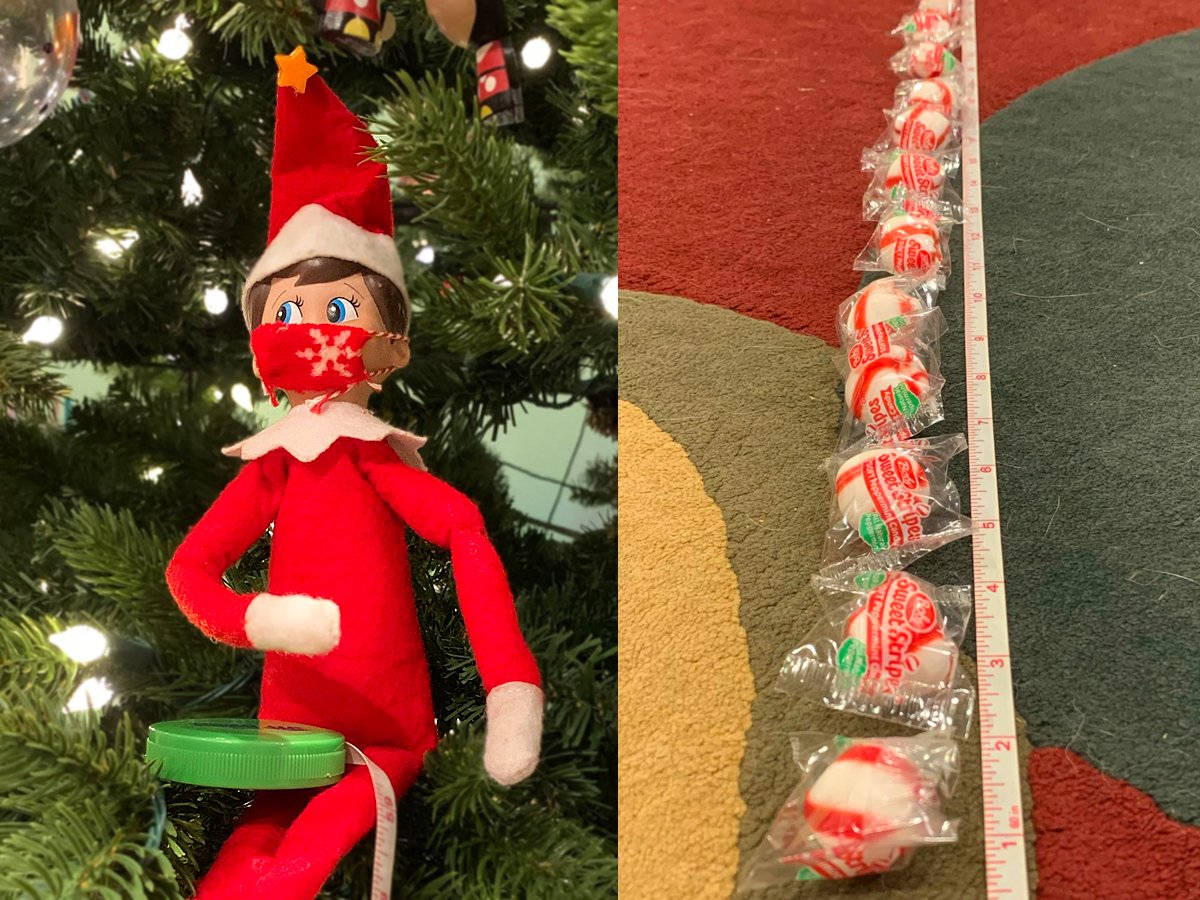 The elves determined that 6 feet is about 36 peppermint puffs long. Photo: Christi Young

In 2020, the restrictions of the pandemic made the arrival of the elves even more exciting for my daughters. On Dec. 1, our elves showed up with masks on and peppermint puffs measuring out 6 feet, for a socially distant Christmas. It is also a great excuse to keep smaller kids away from the elves, especially when they’ve been a little sloppy with their accessories. 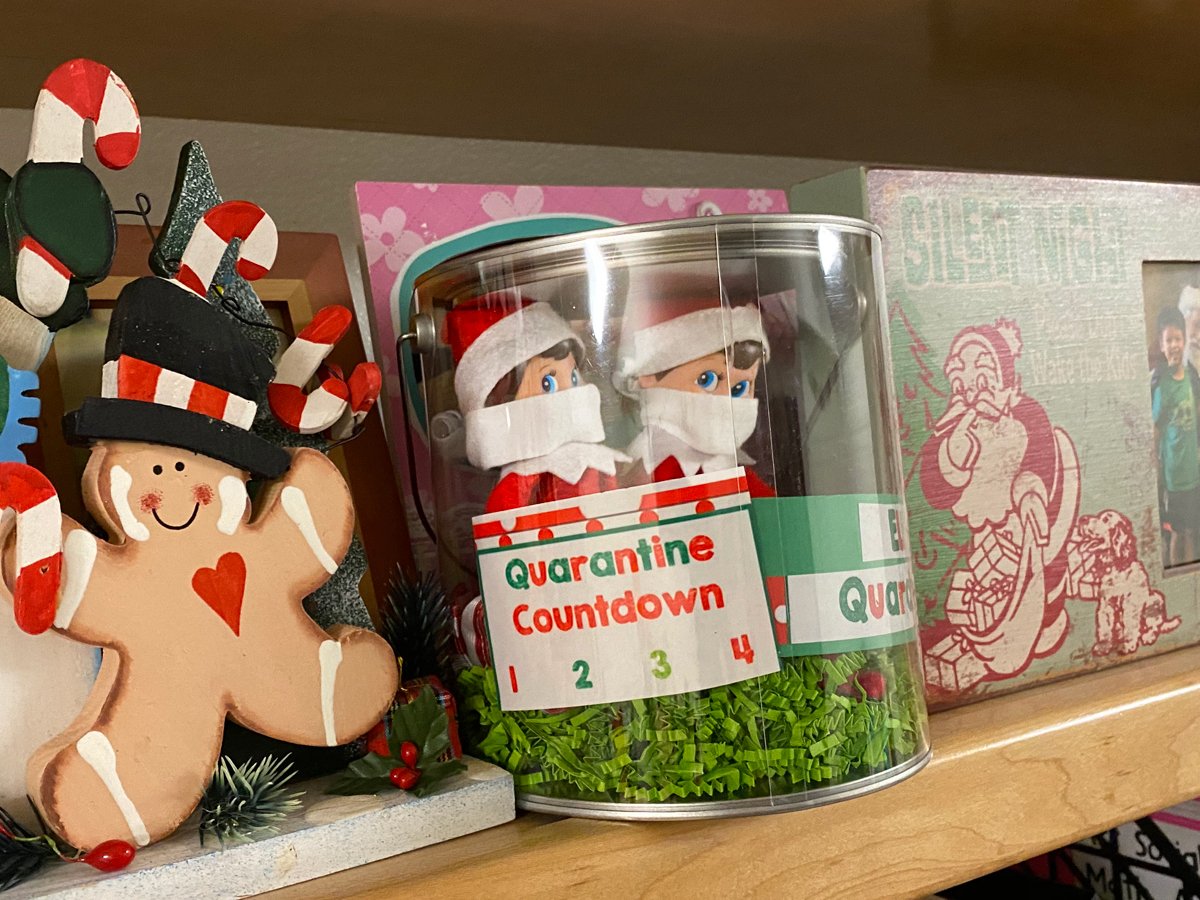 That year, my friend’s elves had to go into quarantine, so they will stay in place for at least four days. (What a brilliant plan!) On tired days, I can forsee our elves needing a little alone time. (A trip to the North Pole is international travel, after all.)

Michele: Our Elf Jack arrived when Luca was only 3, so he was often perched up high, away from curious hands. Elf Julia joined a year later. Once Isabella and Luca were old enough to understand to look, but not touch, things really got fun.

Christi: One of my favorite things the elves do is break out of the house for a round of “elfies.” They eat cookies, ride our dog and even run over to my sister’s house to play on their Christmas decorations. In 2019, they—including their Saint Bernard, Buddy—expanded to both of my sister’s homes and even started writing captions and taking photo credit. A few times, they’ve taken photos with my sleeping daughters. That one always catches them by surprise the next morning!

The best part was that after their wild night, the elves spent two full days sleeping it off. Phew! We all needed it! 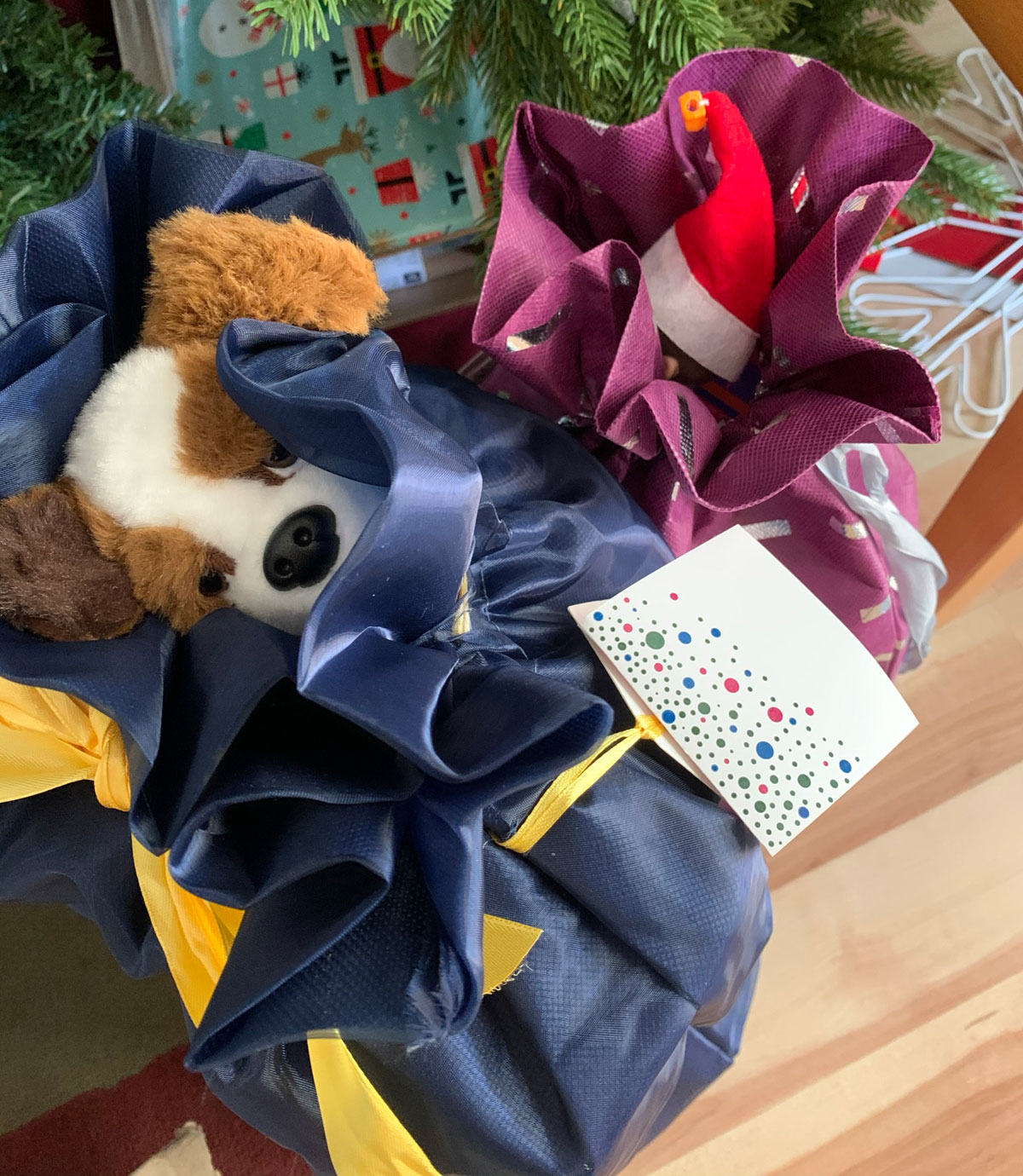 Christi: The elves became very savvy at hide and seek in 2020. There were entire days when my girls couldn’t find them. On this day, they snuggled in to a few Amazon.com packages from mainland friends. The sneakiest spot was in a series of United States Postal Service boxes stacked in the corner of the living room. 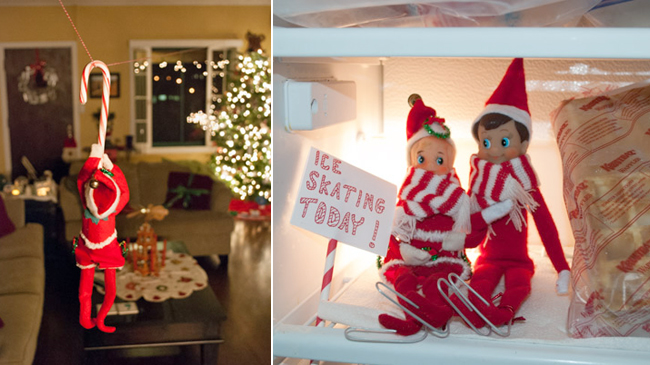 Michele: One year they set up a zip line from one end of the room to the Christmas tree. Candy canes make good zip line mechanisms.

We found them in the freezer once, with paper clips strapped on their feet and an “Ice Skating Today” sign. How did they know we were headed to the Ice Palace that day?!? 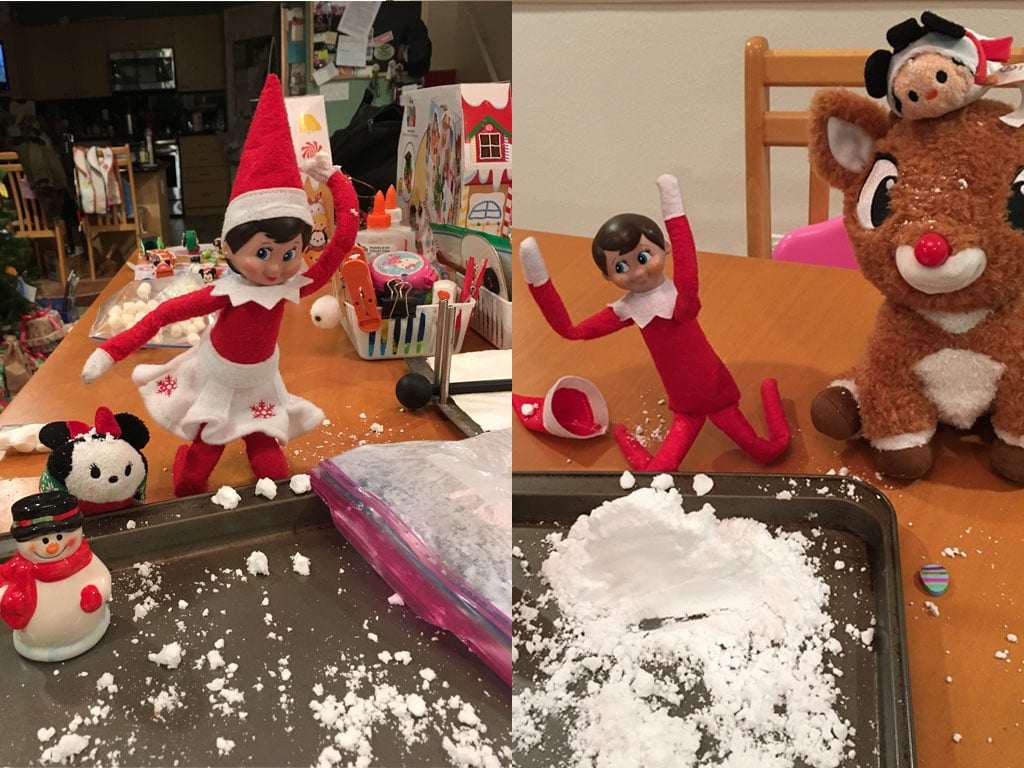 Christi: The day after we made fake snow at Cassera’s class party, the elves got in it. No one was spared in the overnight fight, including the nearby snowman and Santa salt and pepper shakers. The Christmas tsum tsums and Rudolph plush toy also were innocent victims of what appeared to be a messy battle.

Michele: Julia pointed a flashlight towards a mini Disco ball so the Lego people could have a dance party. They also had a limbo contest. 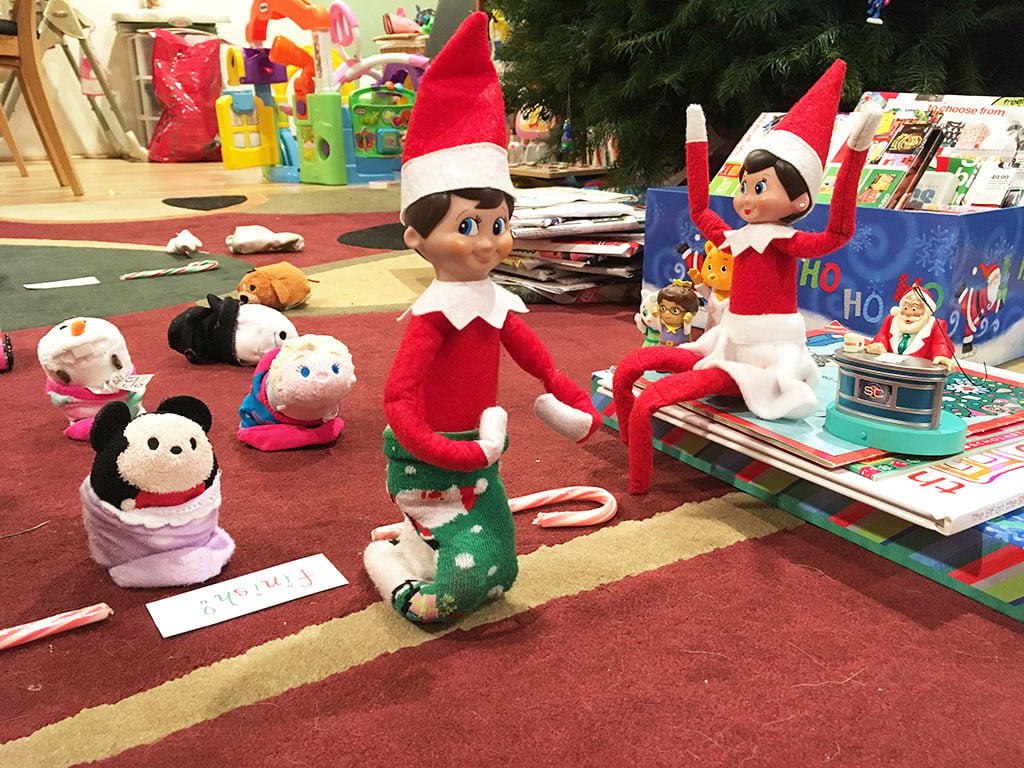 Christi: Our elves, Oliver and Olivia, like to get our daughters’ other favorite friends involved. One morning, we found Oliver in a potato sack or, rather, sock race, with Cassera’s tsum tsums. Note the Daniel Tiger characters cheering them on. Even the ESPN Santa ornament got into the act, presumably doing play-by-play. Later that day, Oliver was spotted sitting in the Christmas tree wearing the HONOLULU Family Fun Run medal as a prize. 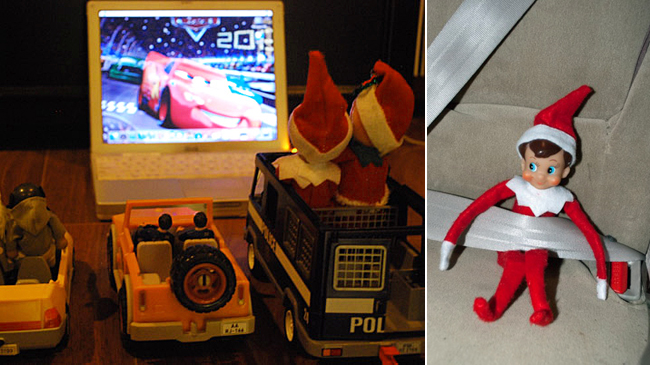 Michele: Elves like Drive-In movies. They sat in cars set up in front of the laptop with a Cars movie as a screen saver.  There were even bits of popcorn on the floor!

One morning the kids could not find the elves ANYWHERE. Time was running out and we had to leave for school. We found Jack in the back seat, buckled up and ready to go. It made for a very calm, quiet ride to school. 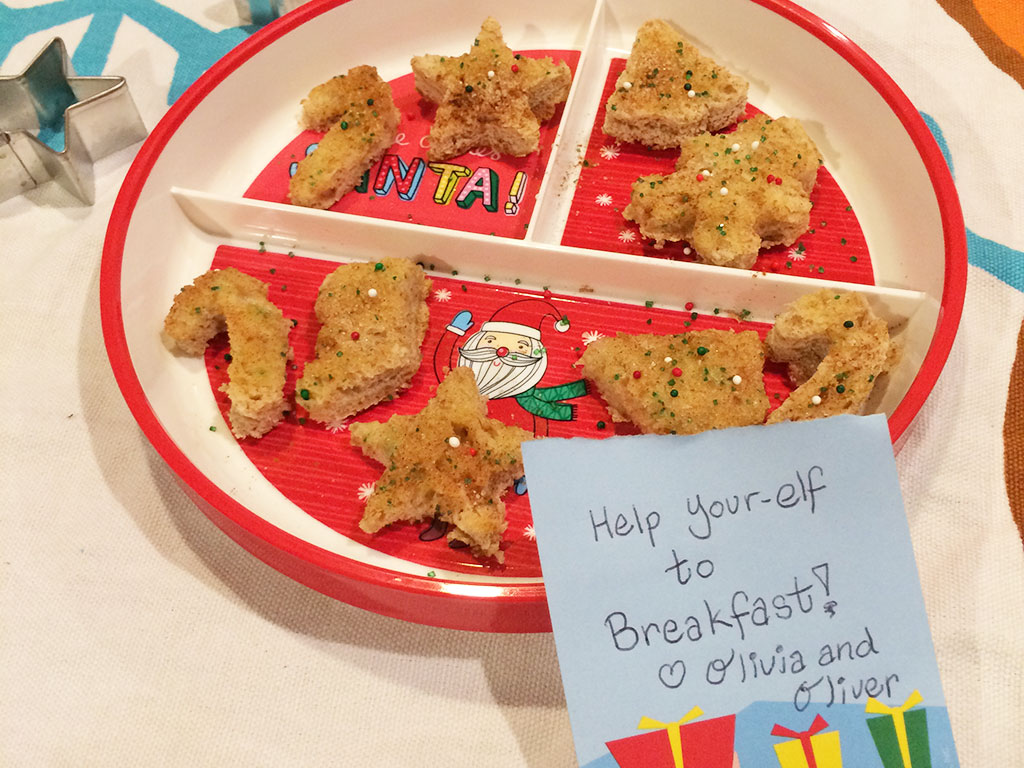 Christi: Olivia and Oliver love Christmas sprinkles and often snack on sweets around the house. One year, they made elf-size cinnamon toast, with sprinkles of course, for Cassera’s breakfast. We found tiny cookie cutters next to the scraps of bread nearby. 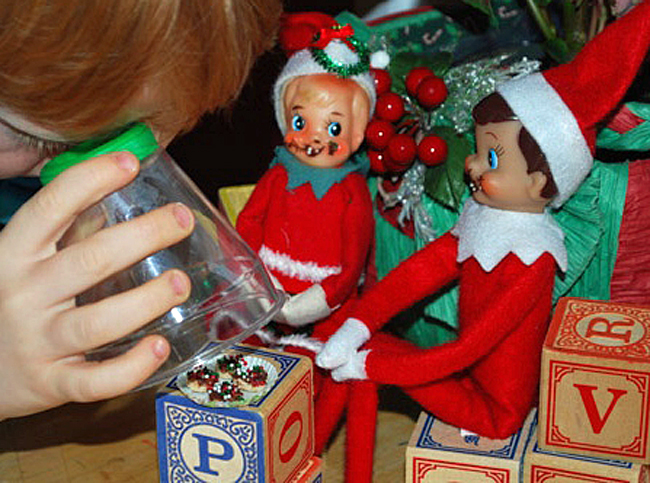 Michele: We found them eating tiny chocolate-covered donuts covered in sprinkles. The elves has chocolate all over their faces! The kids got magnifying glasses out to inspect the donuts and reported that they looked like Cheerios covered in chocolate dusted with sprinkles. 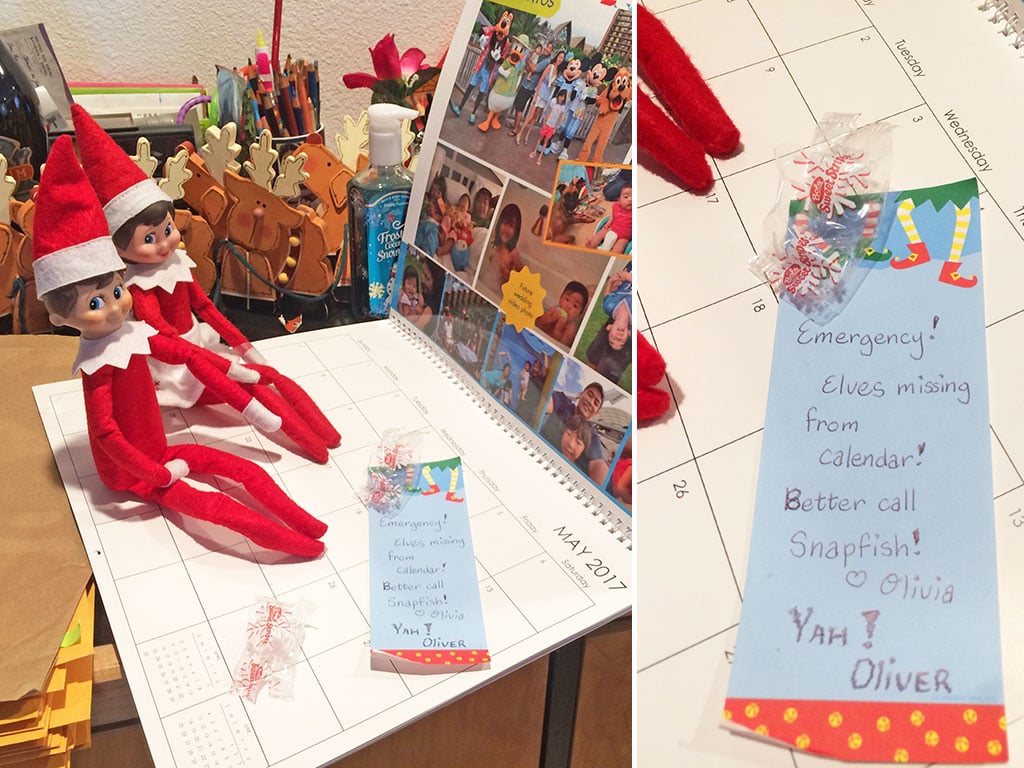 Christi: Our elves are also a little vain. One year when the photo calendars I made for my mom and sisters arrived, Oliver and Olivia were very concerned that they were not featured. This year, we discovered them hanging Elf on the Shelf ornaments with their names on them near our family ornament on the Christmas tree. Oliver, characteristically, was hanging upside down. 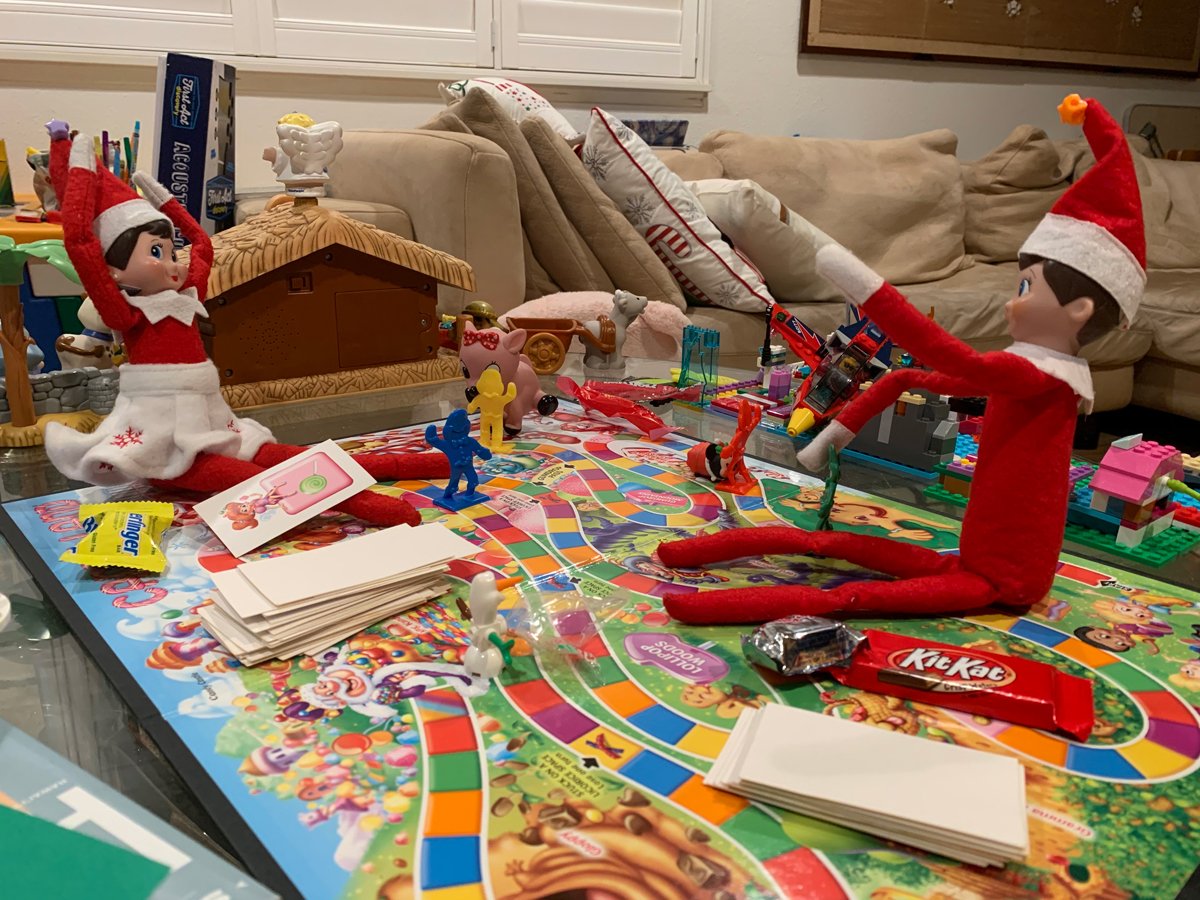 They made a fort with the ice blocks from the Don’t Break the Ice game and had a snowball fight with white pom poms. 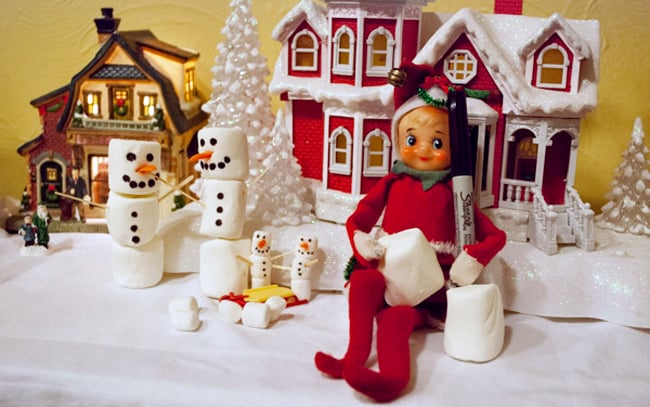 Michele: Julia made marshmallow snowmen for our winter scene using tiny slivers of carrots and some Sharpie markers. 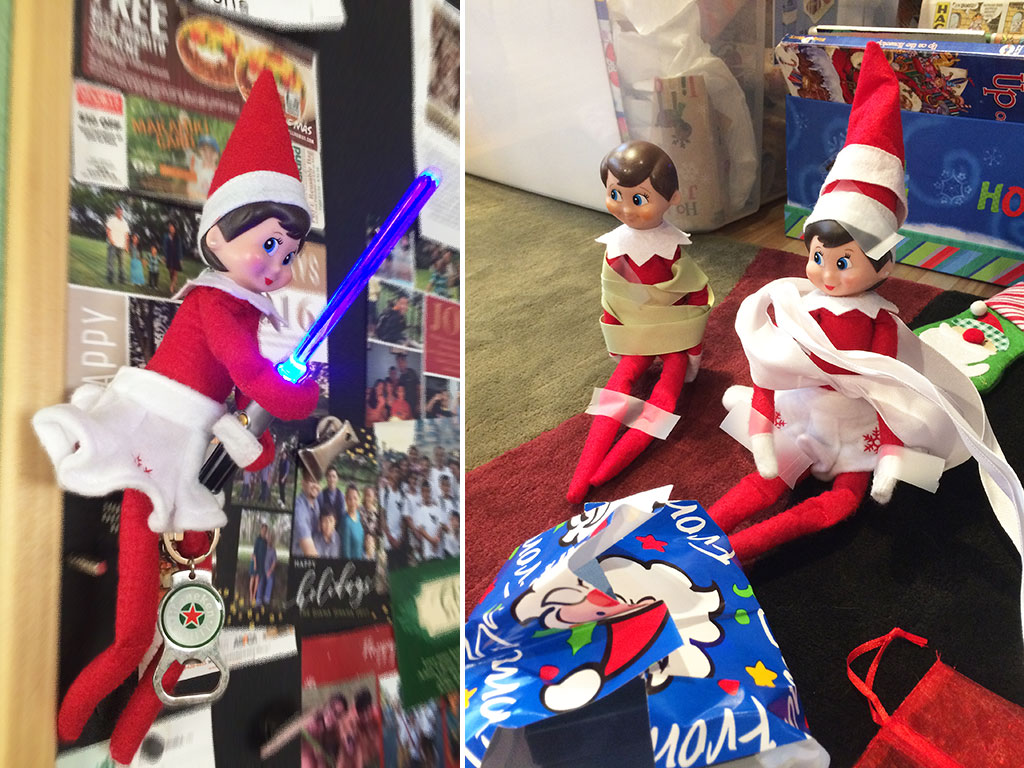 Christi: Sometimes the elf adventures were quite simple. One day, Olivia got hold of a mini light saber we brought back from Disney World. My daughter went upstairs and when she came back down it was on, thrilling her to no end. Every year the elves also attempt wrapping a few gifts, usually with disastrous results. 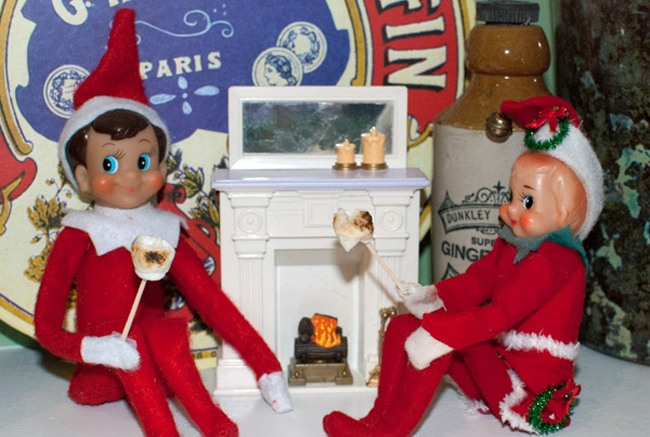 Michele: They made S’mores by the dollhouse fireplace with mini-marshmallows (that were toasted!) on toothpicks. 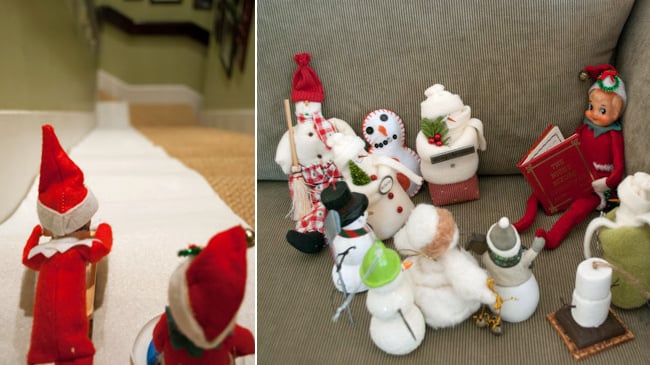 Michele: We found them sledding down the stairs on a sheet of toilet paper. One elf used a sled ornament from the tree. The other grabbed a Moving Man disc from the utility closet and used it as a saucer.

Julia once read The Night Before Christmas to all of the snowmen ornaments and decorations. 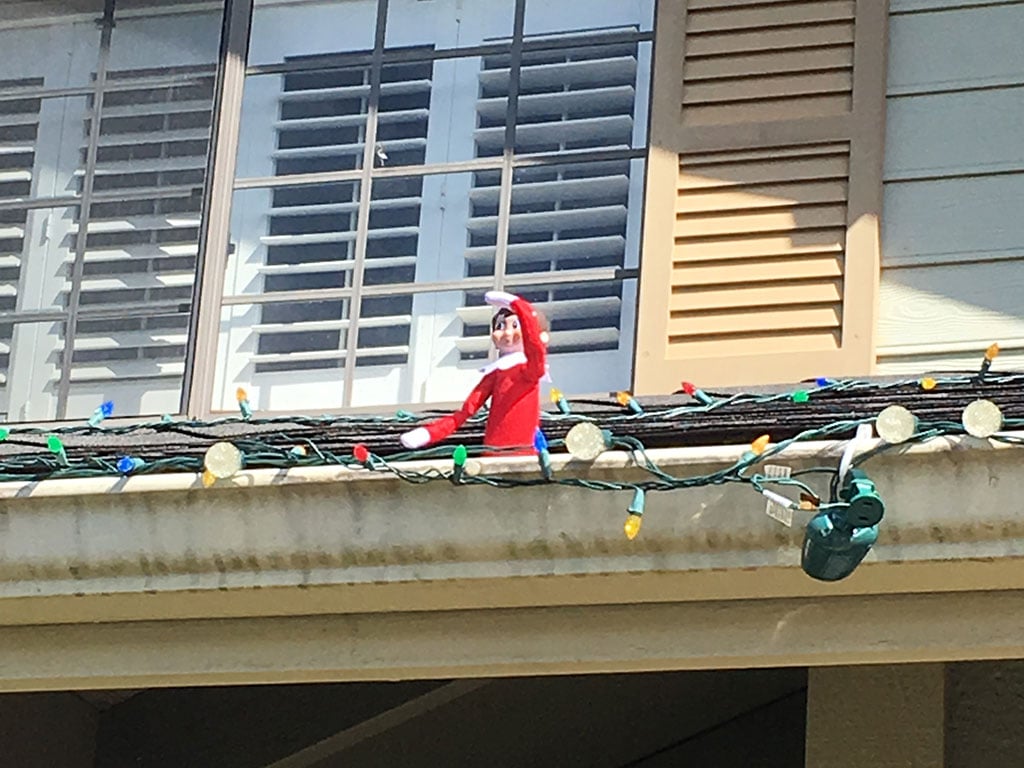 Christi: Oliver’s hat came loose and he has turned entire rooms upside down looking for it. One day, while we were putting up the Christmas lights, we ran across the elf searching for it through the neighborhood. We’re thinking we might find him there again on Christmas Eve searching for Santa.

1. Break out! Our elves must have read up on how to get out of the arms-tied-together pose. Apparently they now know that floral wire in their arms and legs allow them to move around and even grab on to items. We see their creativity on Pinterest as well as by following @elfontheshelf on Twitter and Instagram.

2. Shop all year. We notice that our elves keep an eye out for elf-sized props all year round and stash it away for December. Tiny screwdrivers from eyeglass repair kits, mini bowling and pool table sets and tiny soccer ball erasers have all made appearances. Ornaments are also a great find, especially at discounted prices after Dec. 25.

3. Hit the toy stash. We also noticed that they seem to raid the toy box and doll house, and have even gone shopping at places such as Target and the baking company Wilton for Elf on the Shelf goodies such as band aids and cupcake liners.

4. Feel free to ask a favor. One thing we did request from the elves this year: that they arrive a little later. Since our mornings are fairly busy as we get ready for school and try to beat traffic, we are writing the elves a note asking them to reappear during the day when no one is home, at least on school days. 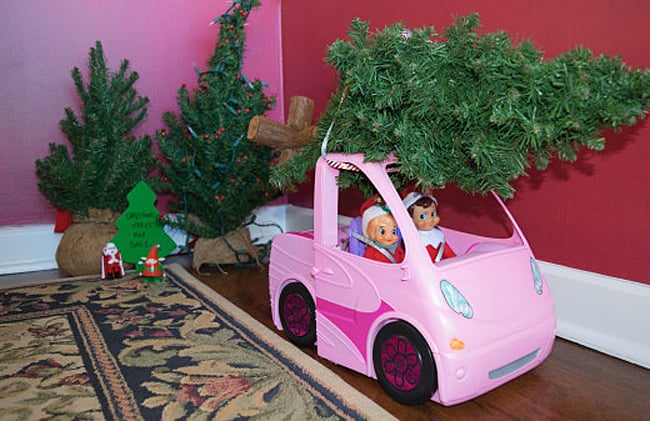 You can adopt an elf at many major retailers and elfontheshelf.com. This website has many fun games for the kids. Are you elves looking for creative ideas? There’s an app for that! There’s even a reminder alarm so the elves don’t forget to fly back to Santa and reappear the next morning.