Who wants a pog fruit? 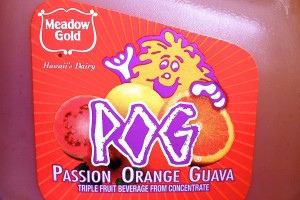 To say I’ve had a longtime love affair with POG would be a understatement. Thanks to Costco, I have a two-gallon-a-week habit. Sometimes, after covering events, I’ll go out of my way to find a convenience store to get my fix for the trip home.

Yup, if I had to give up a food item for the rest of my life, POG would definitely not be it. There’s something magical about the combination of passion fruit, orange and guava juices, which is why my head nearly imploded when I found out that a French botanist living on the Big Island had cloned an actual pog fruit.

The story of the pog fruit began in 1991, when André Thouin, the former chair of horticulture at the Paris Natural History Museum, visited Hawaii while on vacation. After tasting POG, he became intrigued with the drink, wanting to see the fruit from which it came.

Upon learning that POG is a mix from three fruits, his idea to create a pog fruit took root. Several years later, Thouin moved to Hilo after retiring in 1997.

I met Thouin by chance a few weeks ago at the Adopt-A-Beehive event at the UH Hilo College of Agriculture farm and learned about his amazing creation. We were both too preoccupied visiting our respective beehives to have an in-depth discussion, but we exchanged contact information and chatted earlier this week while he was in Honolulu visiting friends. 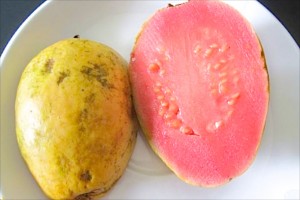 Thouin explained that after moving to Hilo, he started experimenting with creating a pog fruit as a hobby.

“The first obstacle was the difference between the three plants,” he said. “Guavas and oranges are compatible for grafting (the process by which tissues from one plant are inserted into another) because they are both trees. The passion fruit, however, comes from a vine, which makes it unable to be grafted with the other two plants.”

Knowing that grafting a passion fruit (specifically the Hawaiian liliko’i) vine with a tree was all but impossible, Thouin said he experimented with different varieties of guavas. “I needed to start with a more acidic fruit in order to replicate the flavor of the lilikoi, so I knew that I would have to start the guavasteen.” (The guavasteen is commonly known as a pineapple guava for its flavor.)

Thouin then started grafting the guavasteen with other varieties of guavas, including the Detwiler, Hong Kong Pink, Mexican Cream and Ruby X. After several years of trial and error, it was a graft between the guavasteen and a Beaumont guava that yielded a fruit with the desired liliko’i characteristics.

Thouin grew three successful generations of his new fruit before he proceeded to graft his “liliko’i guava” with orange tree saplings. Ten more years of grafting, growing and grafting again passed until the summer of 2010, when Thouin bit into the first ever pog fruit.

When I asked Thouin why he never publicly announced his horticultural breakthrough, there was no response since he actually died in 1824.

Thanks to Mark & Candy Suiso for their help with the agricultural facts for this post. Believe it or not, according to Mark Suiso, it is theoretically possible to clone a pog fruit in this manner, so come on botanists. A pog fruit would be awesome!