What makes a chef? 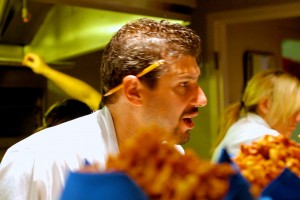 This past weekend, a culinary student volunteering at the Honolulu Festival Friendship Gala asked me what it takes to become a chef. Although there are a lot of qualities involved, the main requirement is that a chef must be both a cook and a manager. If you can’t do both proficiently, you won’t make a good chef.

Many people in the industry have the chef title. Anyone with enough money can open up a restaurant and call themselves a chef, but that doesn’t necessarily mean they are one. I can walk around wearing a Hawaiian Airlines pilot’s uniform, but that doesn’t make me qualified to fly an airplane.

For obvious reasons, a chef must have knowledge of cooking and working in a professional kitchen. Cooking at home and in a professional kitchen are two completely different things. Yet, formal training is not required. One of the best chefs I know started out cooking on a fishing boat at age 18. All his culinary knowledge was acquired on the job, and through diligence and a eagerness to learn, he worked his way up the ranks until he became a sous chef at a hotel.

Many will say it’s all about the food, but a restaurant is a business and needs to make money. And as a kitchen manager, a chef is responsible for managing food costs, ordering, scheduling and keeping labor costs down. Eventually, chefs could reach a point where their job involves more managerial duties than cooking, at which time, their culinary knowledge is applied towards quality control instead of actual food preparation.

The Cook vs. The Manager

Throughout my career, I’ve met a lot of phenomenal cooks. However, more than a few of them will never become chefs because they either don’t have the ability or desire to do the managerial part of the job. I once worked with someone who had the chef title, but didn’t really fit the role. He was a fantastic cook, probably the best that I’ve had the pleasure to work with, but he couldn’t achieve a food-cost percentage below 40% to save his life. He was prone to over-ordering and not utilizing products efficiently, which led to food spoilage. Although his food was off the charts in terms of quality and taste, so were his food costs. This in turn affected the restaurant’s profit margin and eventually, the owners let him go.

The Manager vs. The Cook

Although his replacement was a really cool guy, it became clear the restaurant went to the complete opposite extreme. Within a few months, the new chef completely reorganized the kitchen and got food costs under control. He was a great manager, but not nearly as good a cook as his predecessor. His menu was rudimentary at best, and regular patrons began to complain that the quality of the cuisine had gone down. The new chef was able to bring costs in line at the detriment of food quality. As a result, business dropped off and the profit margin ended up being no better than with the previous chef.

The restaurant found itself in a precarious position. It would be impractical to have both a manager and a cook to manage a kitchen, so they needed find someone who could please customers with great food, yet master the principles of managing an efficient kitchen. This is what makes a Chef. So to those of you in culinary school, I know management and cost-control classes aren’t as fun as cooking labs. But if you really want to make it in the food service industry, you must be able to do both roles equally well.