We Tried It: Razor Sports Drifting

Slip, slide and spin with the whole family at this insanely fun indoor track. 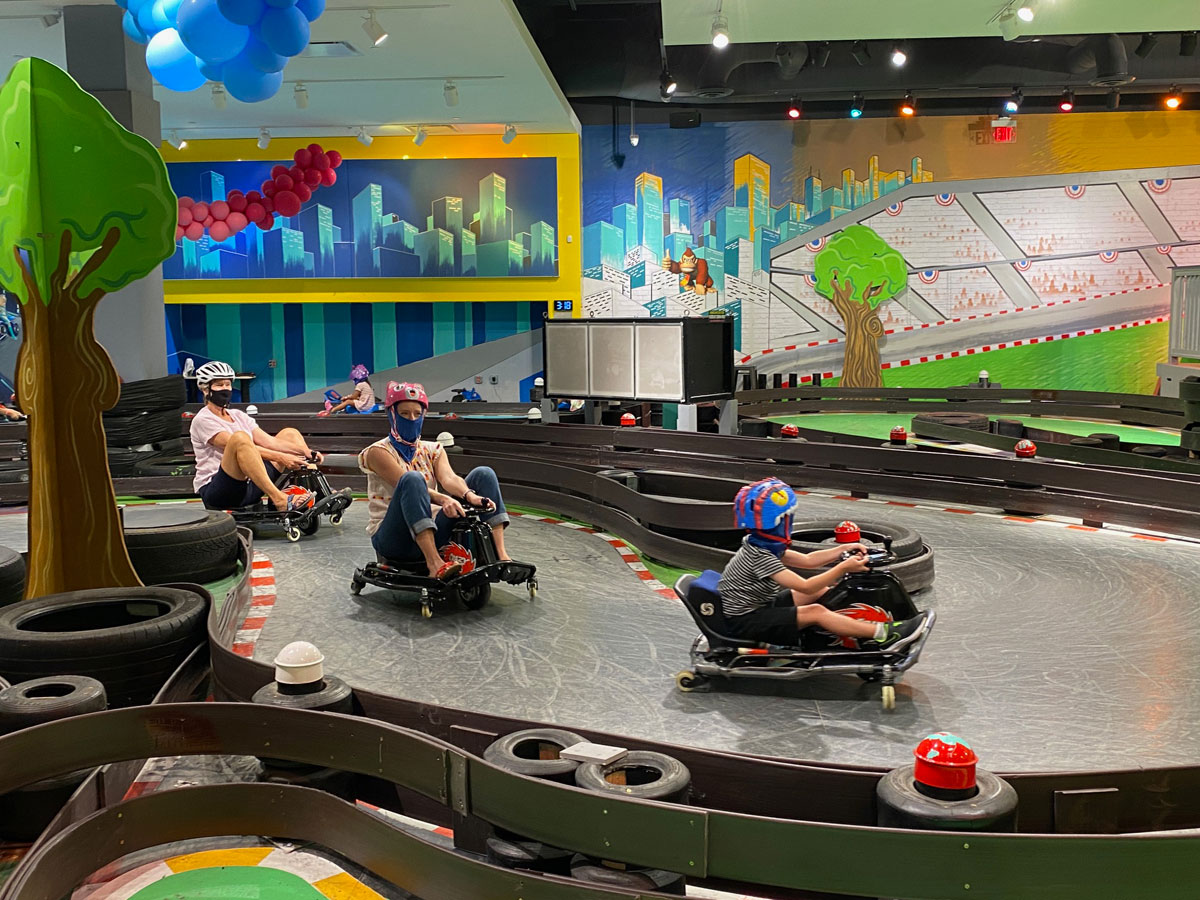 One of two tracks at Razor Sports. Racers are separated by age. Photo: Laura Dornbush

Who: Two grandparents, a mom and her 4-year-old son

When: Monday afternoon at 3 p.m.

“It’s called DRIFTING, Mom.” Don’t get caught calling it “go-karting” like I did. Boy, did I feel old when my 4-year-old son, Duke, corrected me. For geriatric millennials like me who are unfamiliar with this new trend in indoor racing, I’d liken it to live-action Mario Kart, but without the shooting turtle shells part. 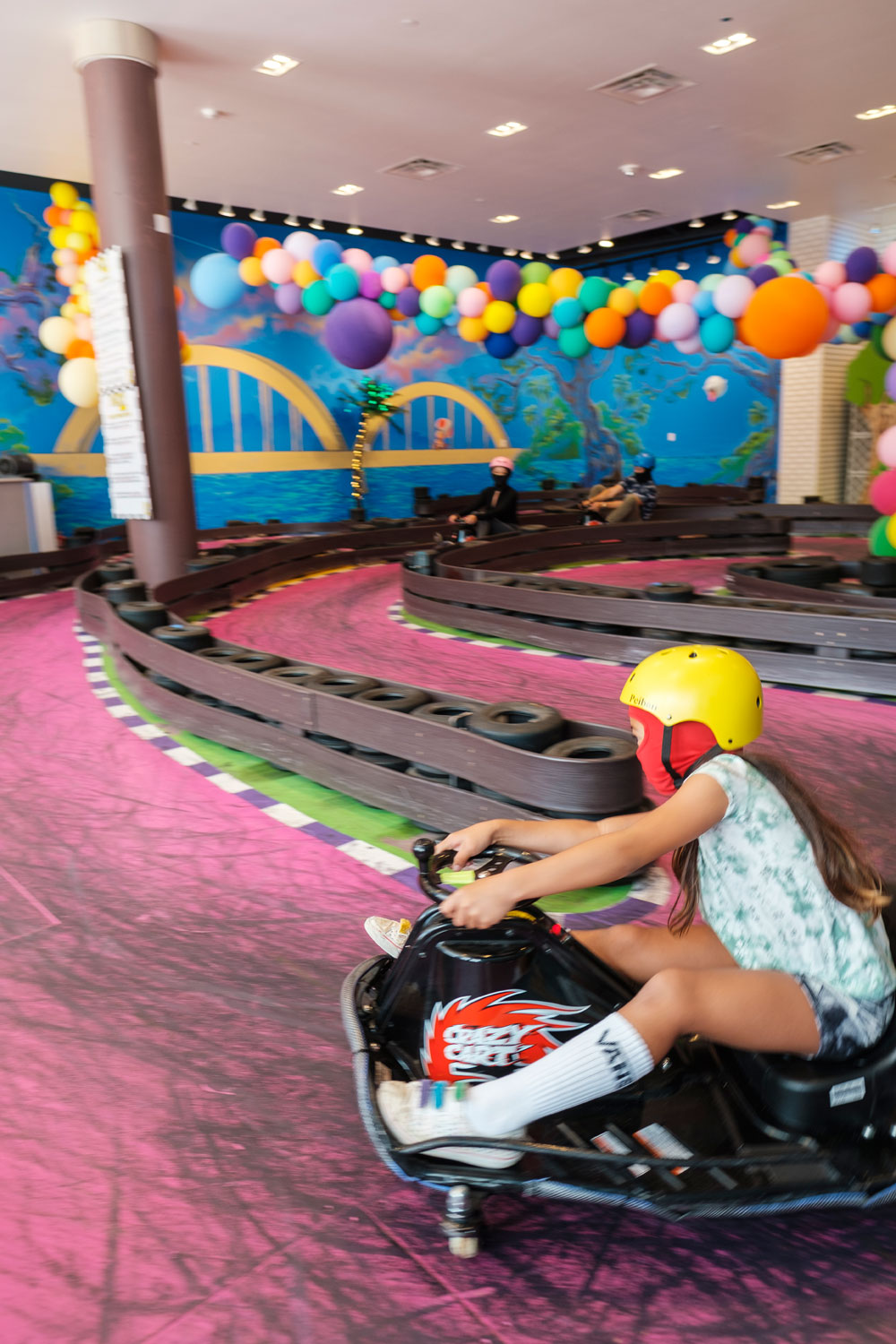 Duke and I met up with his grandparents at the Razor Sports Pearlridge Center location for a multigenerational family outing after preschool. Note: the Pearlridge location closed shortly after we visited, but there is a new location at Ka Makana Ali‘i in Kapolei that’s set up the same way.

See also: ⛳ We Tried It: Mini-Golf Courses on O‘ahu

As we entered, we immediately got the feeling that this was going to be a ton of fun. The brightly colored murals covering every wall in the space and balloon garlands hanging from the ceiling create a playful, partylike atmosphere. In fact, we spotted a birthday party area in the back. Also, if you enjoy RC drifting, there’s a mini-track there, too, for remote control cars. 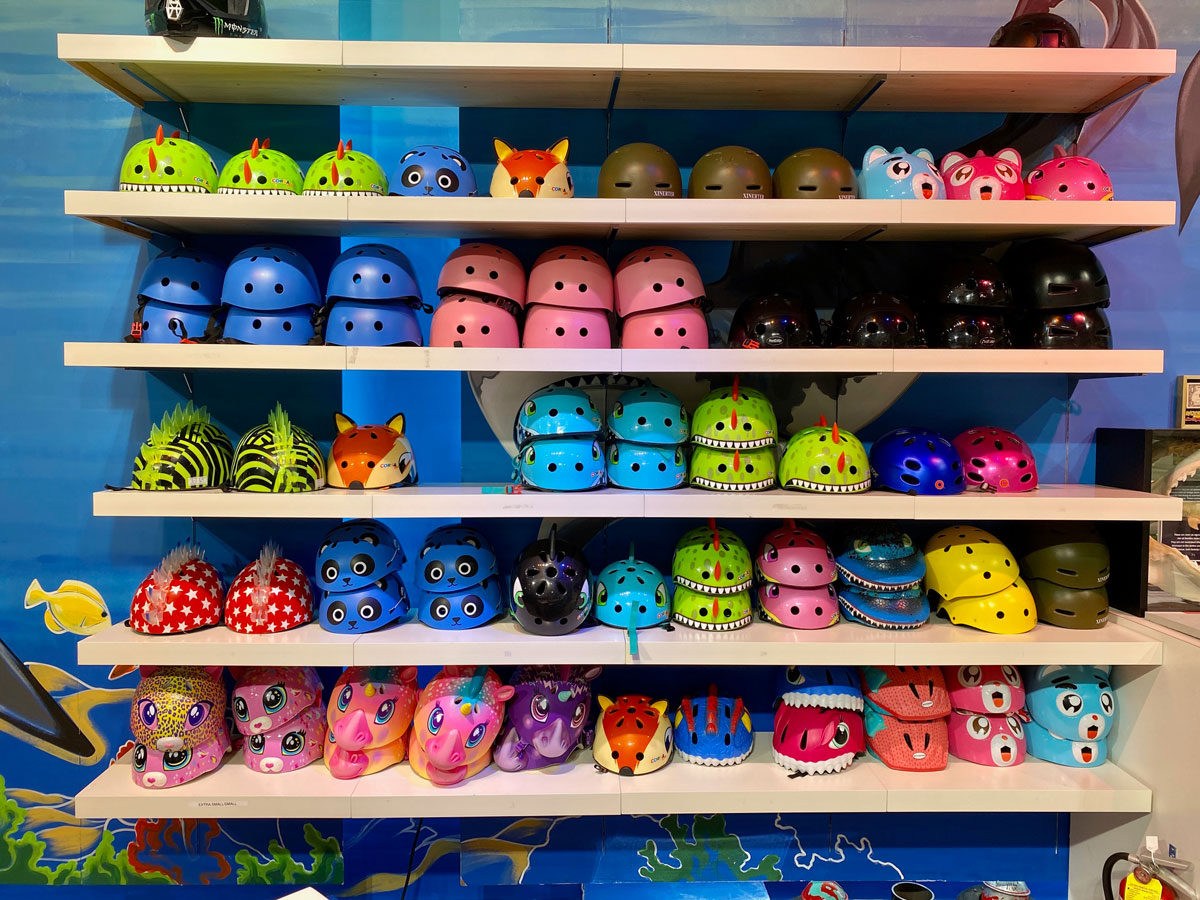 After checking in and signing the waiver via QR code on our phones, we donned the required head socks ($3.50 each)—hoodlike protective barriers that cover your nose and mouth—and were instructed to choose from dozens of animal-themed helmets, including foxes, pandas and unicorns. Duke selected the ferocious dinosaur helmet, and I went with a cute kitty one. Grandpa and grandma brought their own helmets, so they didn’t have to wear the head sock. And we all had to wear masks.

We waited for the previous group to finish, which gave us some time to observe and figure out how these karts operate. They are battery-powered (no gas fumes—yay!) and have a center anchor wheel. When you pull up on the lever, it lifts the four corner wheels and allows you to spin and “drift.” 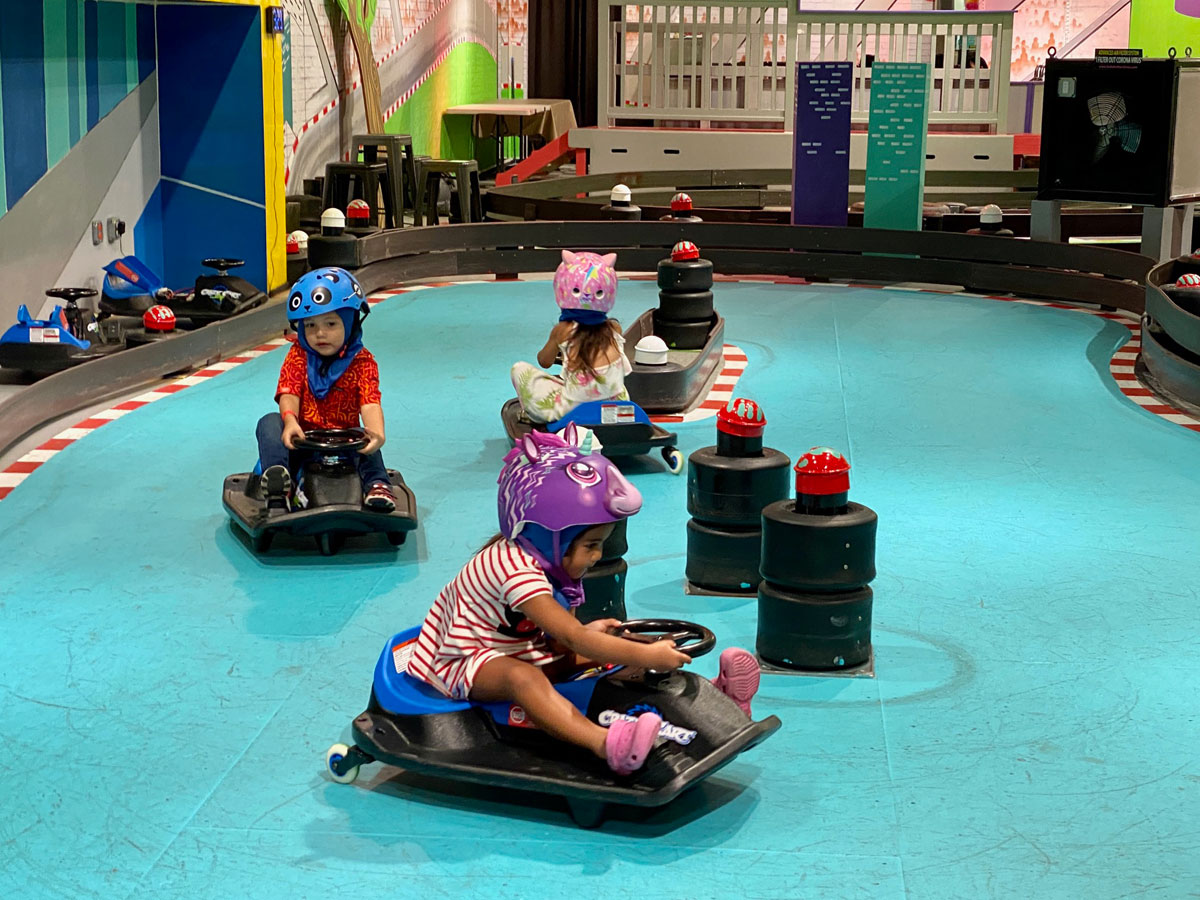 Finally, it was our turn! I was a little nervous when I saw the attendant fitting Duke into a Crazy Cart for the “big” track versus a Crazy Cart Shift, which is designed for younger kids on a smaller track. He assured me that he had engaged the switch to “kid mode” which limits the speed. The Crazy Carts have a max speed of 12 mph while the Crazy Cart Shift maxes out at 8 mph.

The attendant was very patient as he explained how to steer and use the acceleration pedal in terms a 4-year-old could understand. Then off Duke went, with grandma and I right behind! It didn’t take him long to figure it out. The first lap he was concentrating hard. By the next lap he was free as a bird, gunning the pedal. 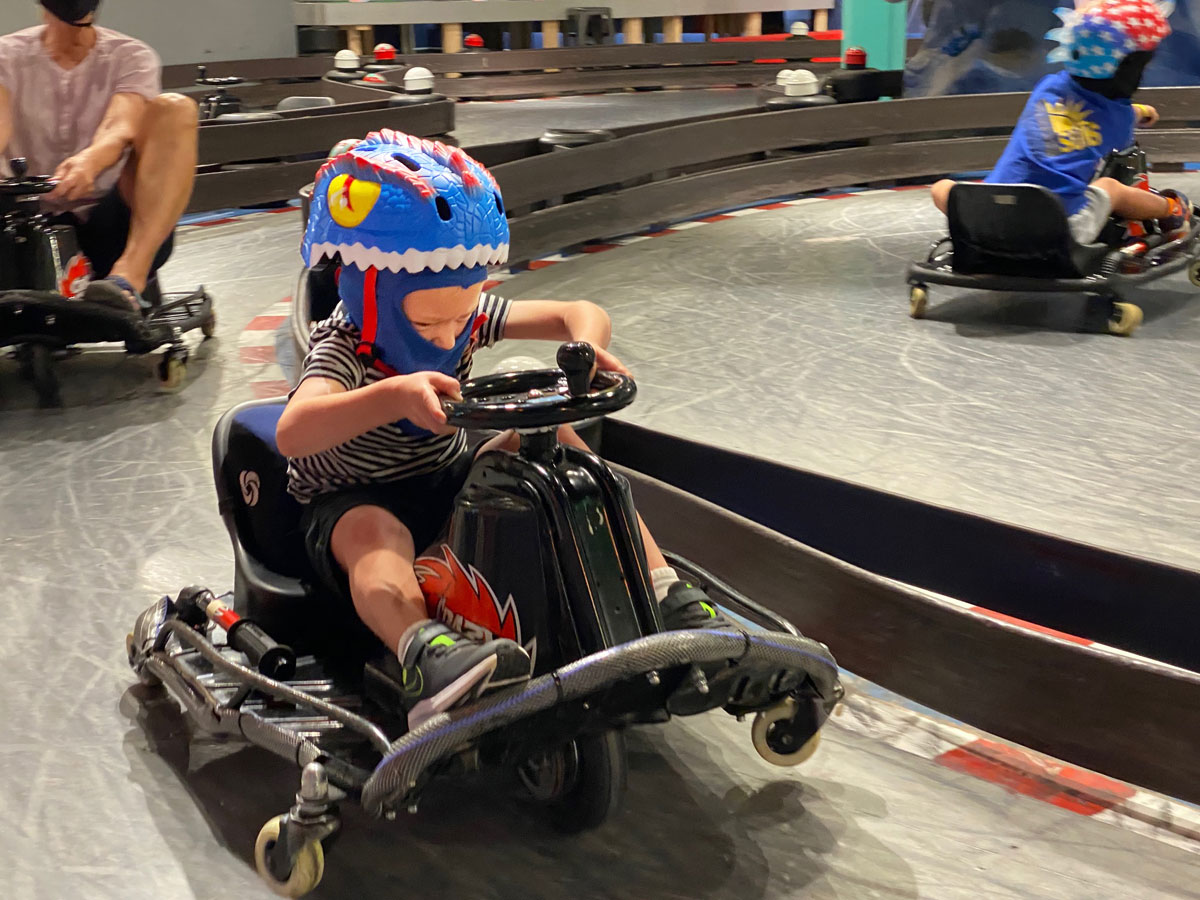 The “drifting” lever was a little too advanced for Duke to handle, but my parents and I got a thrill with the extra slide and spin it created when navigating a turn. While they are not designed as bumper cars (and you are instructed to not purposely collide), there were a handful of accidental crashes that ended in laughter. The attendant played superhero, saving the day and getting us all pointed in the right direction again.

Before we knew it, we were directed to the pit stop and our session was pau. All of us had smiles on our faces, and the adults felt like kids again. What a cool bonding experience for three generations! Overall, I was impressed at the cleanliness of the operation, which includes a couple of air filter systems. We were also surprised at how long the track was for an indoor space. And not surprisingly, Duke said his favorite part was “going fast.”