What: A 60-minute excursion to a rescue petting farm in Kahalu‘u

Who: 5-year-old Anna, 2-year-old Noah on a home-school field trip

Getting up close and personal with adorable furry animals is always a good time for my two kids. When our home-school group organized a field trip to Lawrence Lovestock, we made it a day of learning. Before heading out, we looked up farm animals and their baby names and researched what produce to bring to feed them. We decided on lettuce, broccoli, carrots and slices of bread and then packed it all up.

We attended as a group, so it came out to only $10 per student. Kids 2 years and younger are free, as are adults and chaperones. We drove out to Kahalu‘u—about a solid half-hour from our Salt Lake apartment—and eventually came to a narrow dirt road that took us up a steep hill and onto a decently sized family compound. 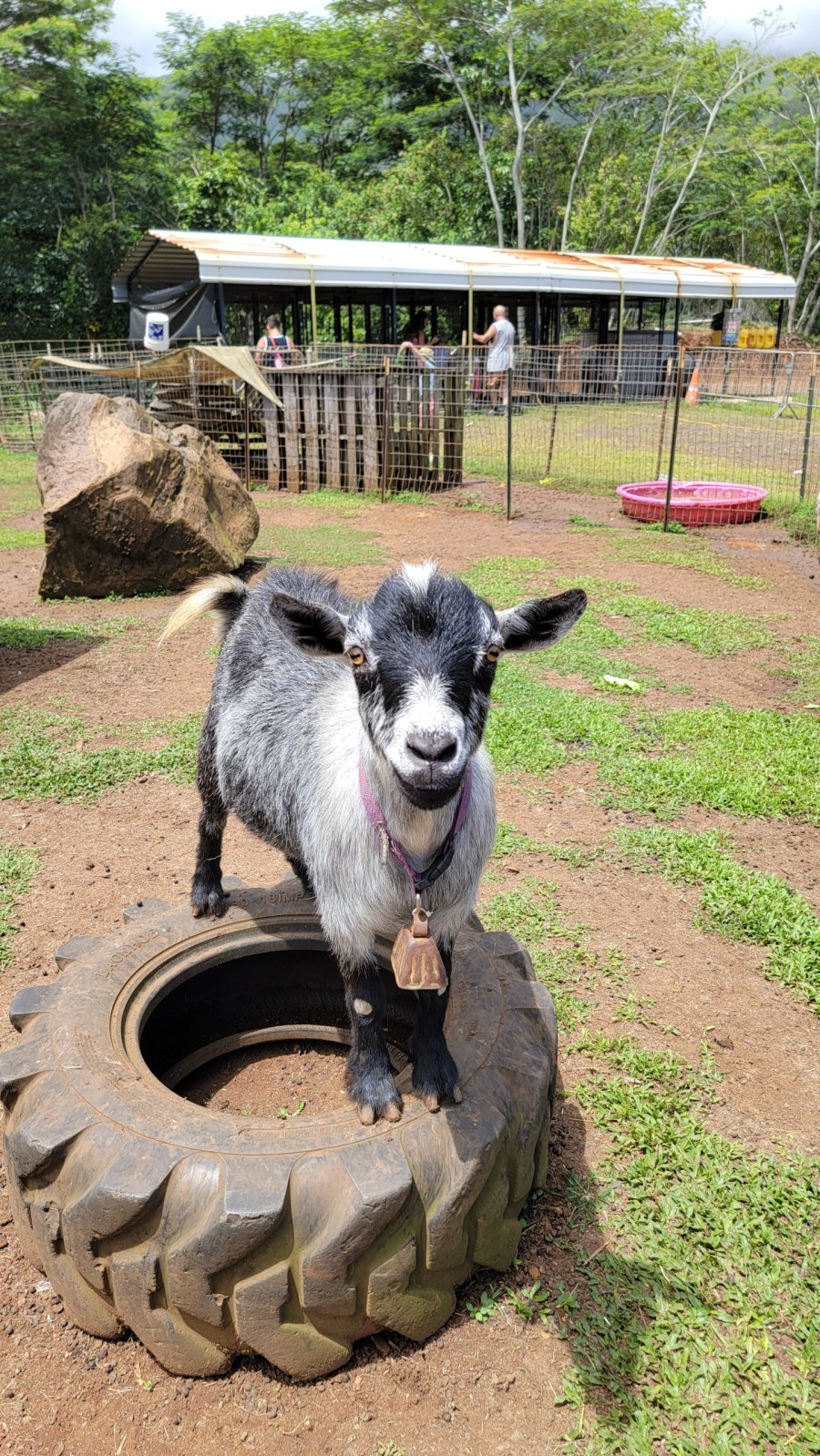 The vibe is relaxed at Lawrence Lovestock, where beautiful green hanging plants and flowers are seemingly everywhere. There’s no official tour—you just bring your own produce and feed the animals. They are all rescues, saved from slaughter and/or re-homed by their owners, hence the name “lovestock” instead of “livestock.”

The owner, Denise Lawrence, takes a few minutes at the start of the visit to share some guidelines: Don’t let the pigs out, don’t take the two male bunnies out at the same time, and don’t feed the baby animals. She also gives some tips: The ducks love being sprayed down with water from the hose and the pigs are big fans of belly rubs and ear scratches. If you find eggs in the duck pen, they’re up for grabs. Also, give food to the animals from the gates before entering to pet them, as they can get really excited. 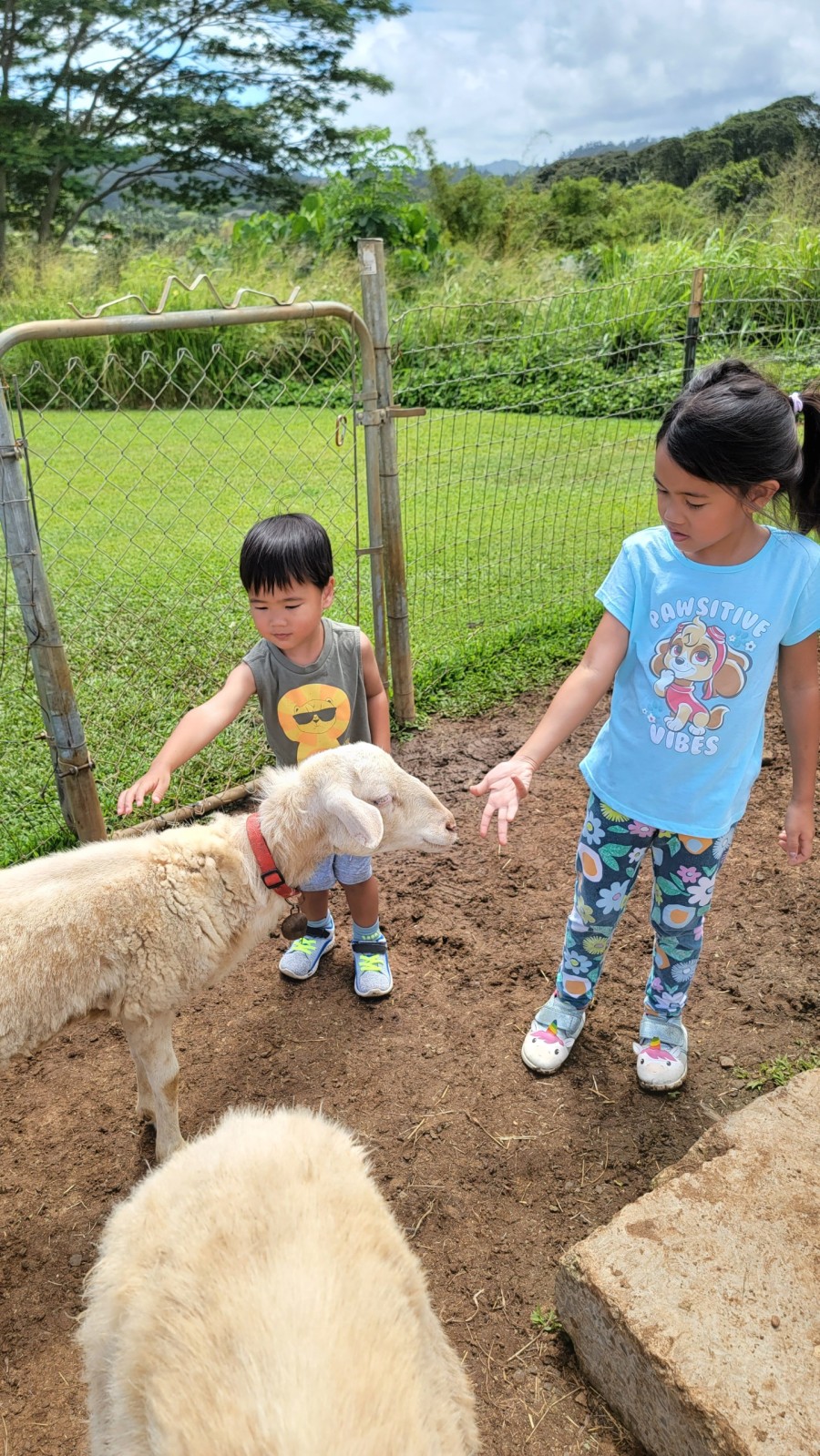 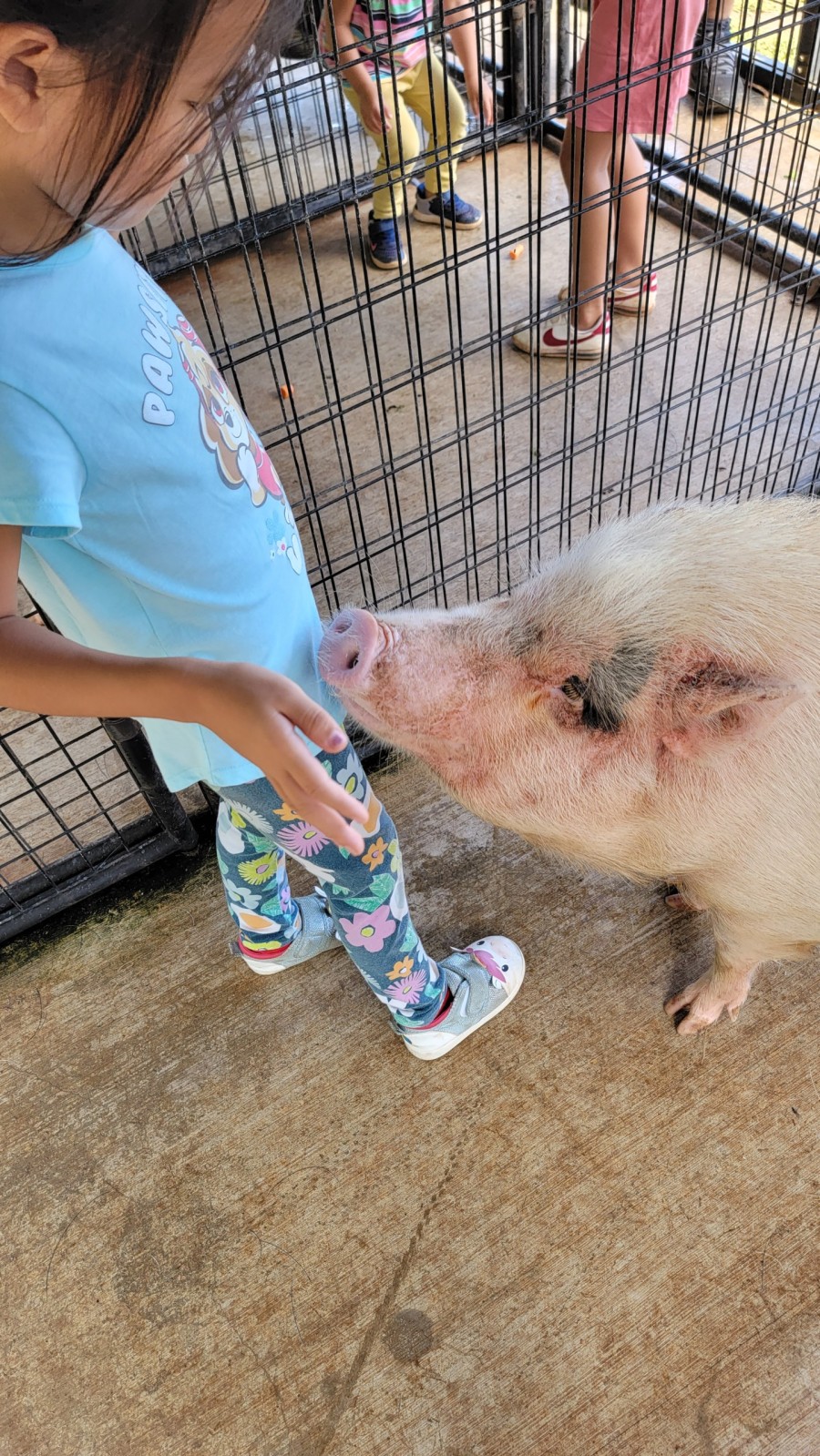 Once Lawrence is done, our motley crew disperses with excited shouts. My two kids move toward the calves first, named Strawberry Guava and Liliko‘i Butter. Goats and lambs are together in another pen and they’re both huge fans of lettuce and carrots. Anna’s a bit timid about giving food to the rambunctious animals, but eventually warms up to it. Noah’s fearless, going up to the gates with open palms. Midway, the petting farm’s 50-pound turkey, flies right up to Anna. “It tried to land on my head!” she squeals.

We move on to the pigs next: Peppa (the largest pig I’ve ever seen!), Oink Oink, Hula, Ginny, Goose and Chili. Anna and Noah are partial to Hula, a pink 3-year-old with wiry hair, “just like Daddy when he puts gel in his hair,” Anna says. 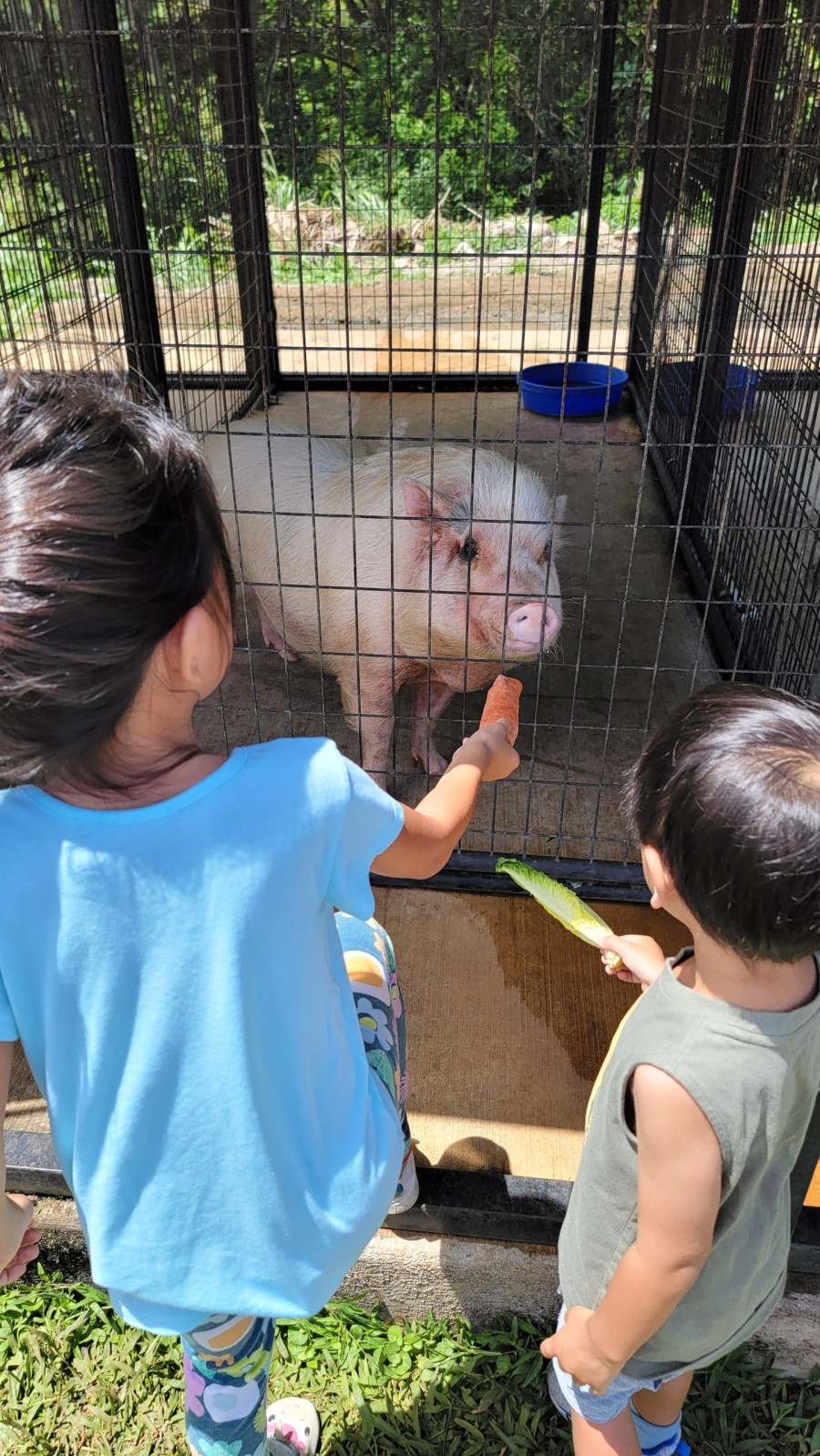 Then it’s on to the lamb and goat pen. The goats are aggressive, the sheep not so much. And then the bunnies, which are a hit with most of the kids, with cute names like Bunny Fufu, Lil Roger Rabbit, Aunty Bunny, Uncle Rabbit and Wallie. They look content in their Easter-decorated hutch and playpen. Next to the bunnies are the parrots, Hoku and Mahina. The owner says that they can sing “Aloha, Pehea ‘oe, Maika‘i” and they speak and understand Hawaiian. 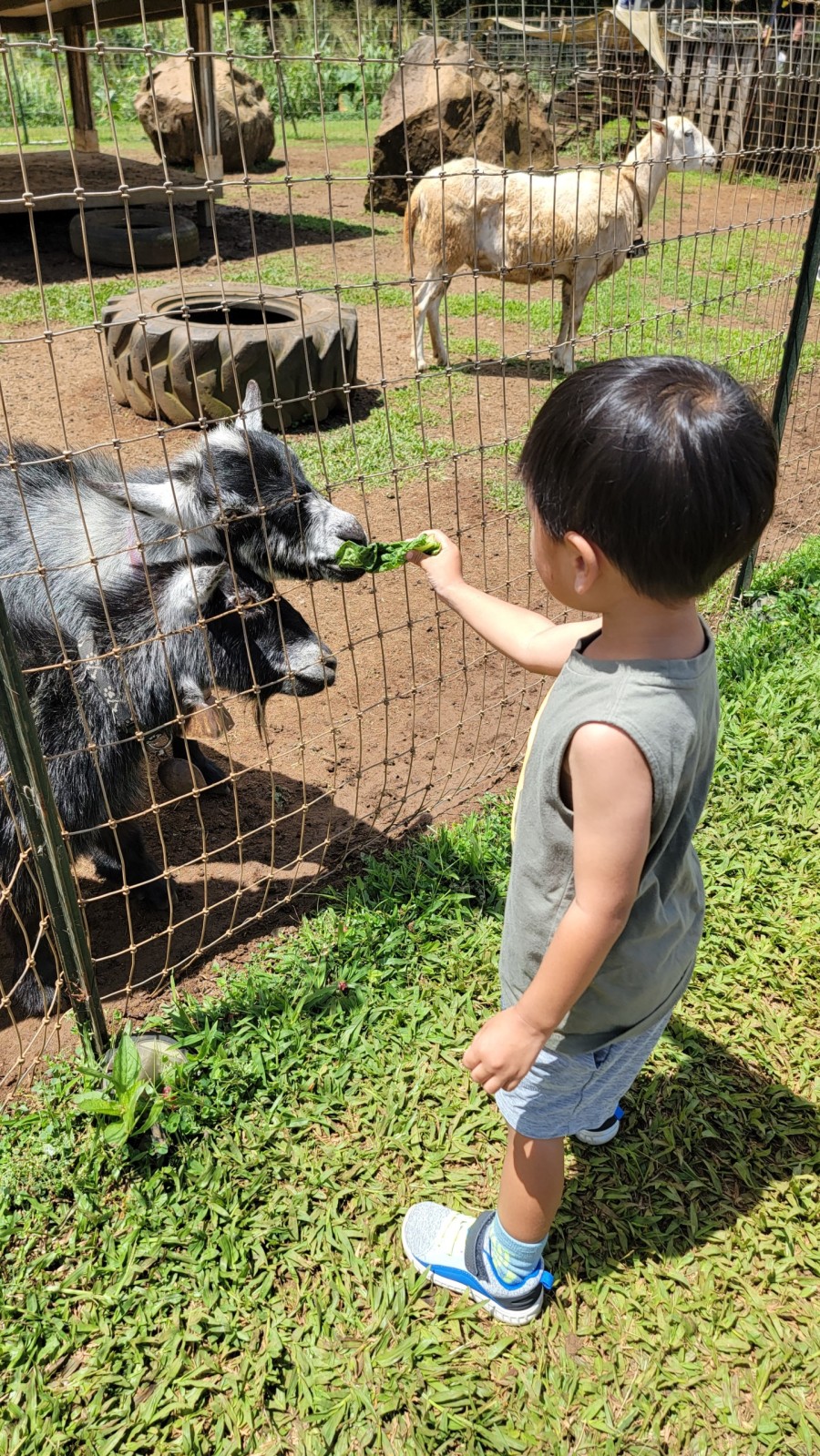 We were there for an hour and the time went by fast. I was a fan of how hands-off and relaxed it was—you can do your own thing and bring as much or as little produce as you want. Anna’s favorite animal was Strawberry Guava, the sweet reddish-brown calf. We’ll be back again, probably with apple slices next time! 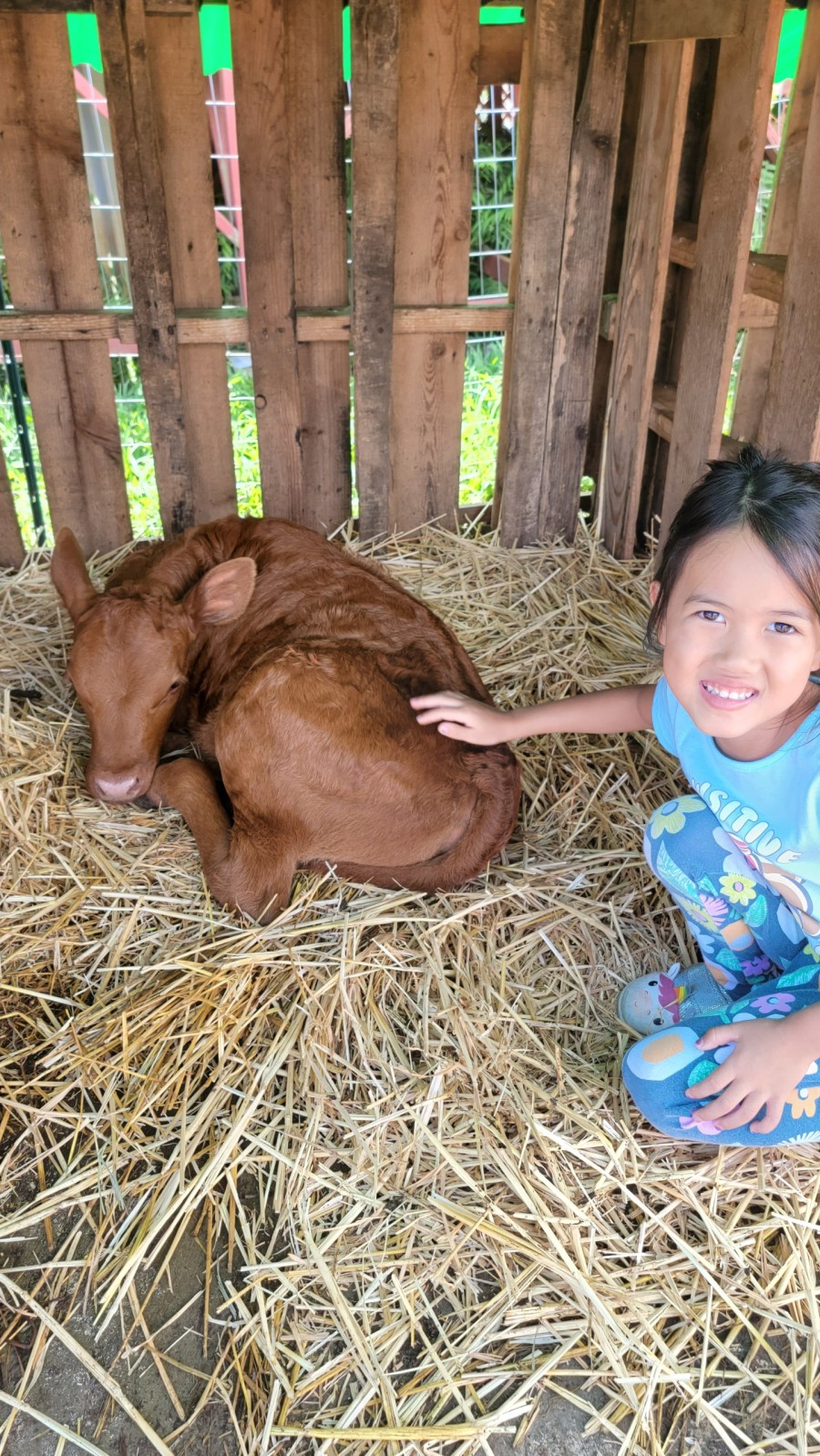