We Tried It: ʻImi Ā Loaʻa: Search and Find

At the state art museum, you can build your own virtual sculpture and explore a garden.

Earlier this year, the Hawai‘i State Art Museum and the Honolulu Theatre for Youth put together a performance with an augmented reality twist: ʻImi Ā Loaʻa: Search and Find. Audiences would embark on a short walking tour from Tenney Theatre to the Hawai‘i State Art Museum with tablets, interact with live audiences and learn about Native Hawaiian art. This month, the team at the theater continued the immersive experience on a smaller scale at the picturesque sculpture garden at HiSAM. My two kids and I had the chance to be one of the first people to try it out. 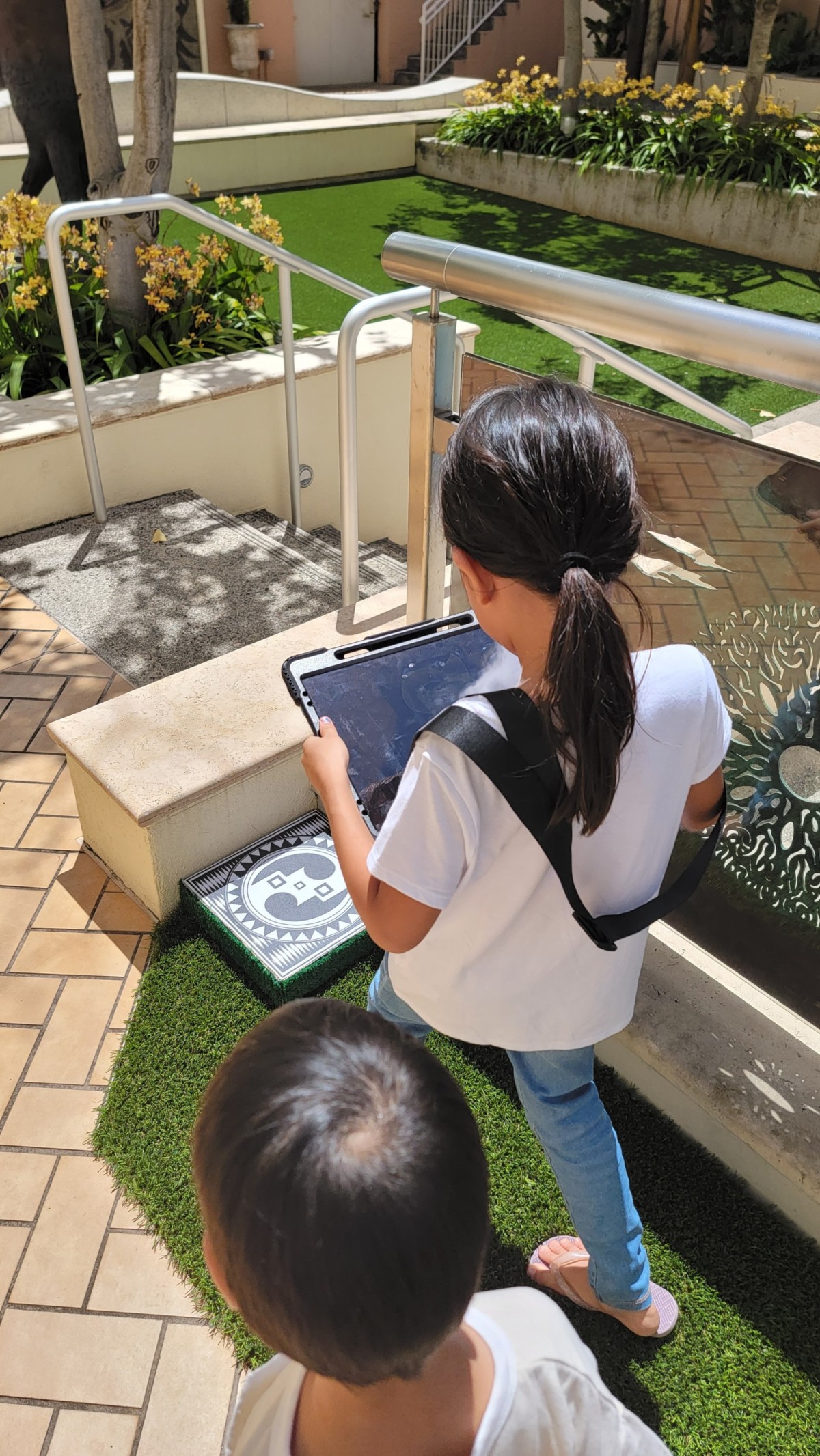 We don’t want to give too many spoilers because there’s a scavenger hunt element to it, but you start by picking up a tablet from the front desk and head to the Sculpture Garden outside. You’ll begin near the entrance and the tablet will show you a picture you’ll need to find on a ground tile. For Anna, my 6-year-old, it was especially exciting because the tablet promises she’ll get to create her own sculpture at the end. It was easy for her to follow the instructions from the auntie on the screen, performed by actress Po‘ai Lincoln. We ran around the sculpture garden in the sun (whew!) looking for the right tile. Once we found it, Anna scanned it with the tablet and then the screen changed to show an outline of a sculpture within the garden. You’re then asked to look for a sculpture that matches the shape. There are five “stops” in all. 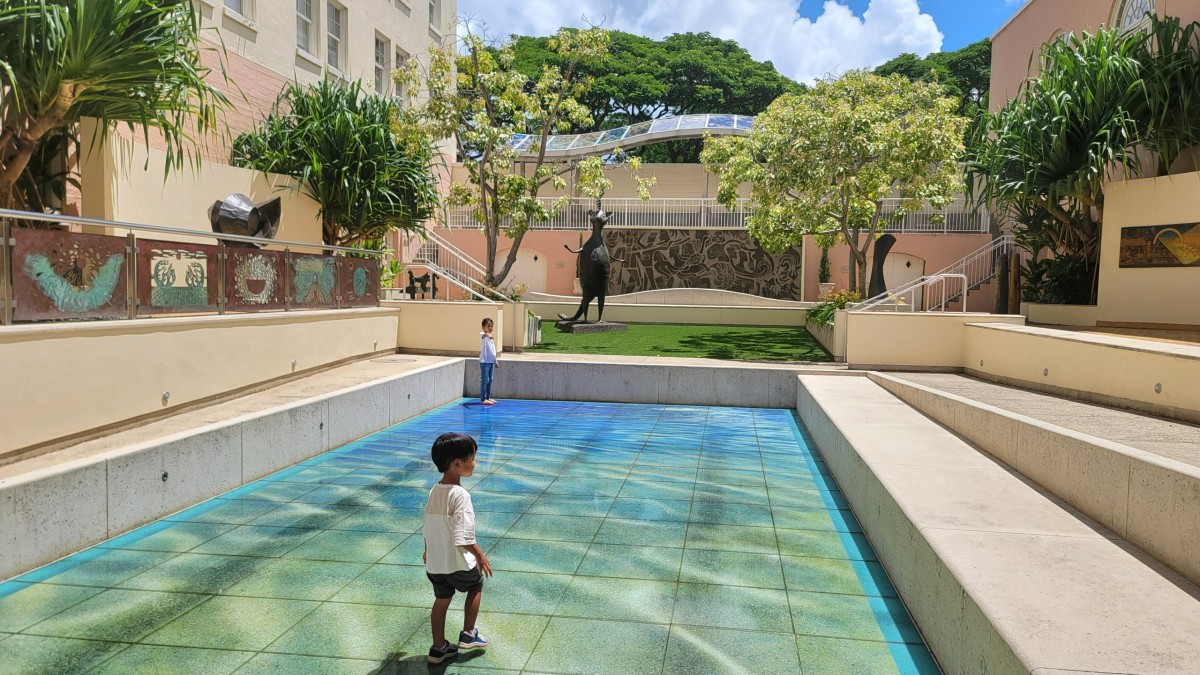 What Anna loved was getting to not only listen to the information, but give some feedback. For example, Jax Bench by Fred Roster is a sculpture of three dogs on a bench. Auntie Po‘ai encourages kids to touch each of the dogs depicted, as well as the stones and the bench, to feel the different textures. The screen then asks which texture is Anna’s favorite and options show up on the screen: the stones, the bench or the dog’s fur. Each station has similar questions at the end, about the size of the sculpture, the colors, the shape, etc. After you’ve found and scanned all the tiles and sculptures, you are asked to look for a place in the Sculpture Garden where you would like to place your very own virtual sculpture, generated on the tablet from all of your answers.

Anna, for example, chose a medium-sized sculpture with rough textures and the color blue. She lifts the tablet in front of her and she’s able to see how her sculpture would look in the garden. After a few seconds, the sculpture eventually fades away, as Auntie Po‘ai says, into the memories of the place. “I want to do it again tomorrow!” says Anna, which is the highest compliment she can give! 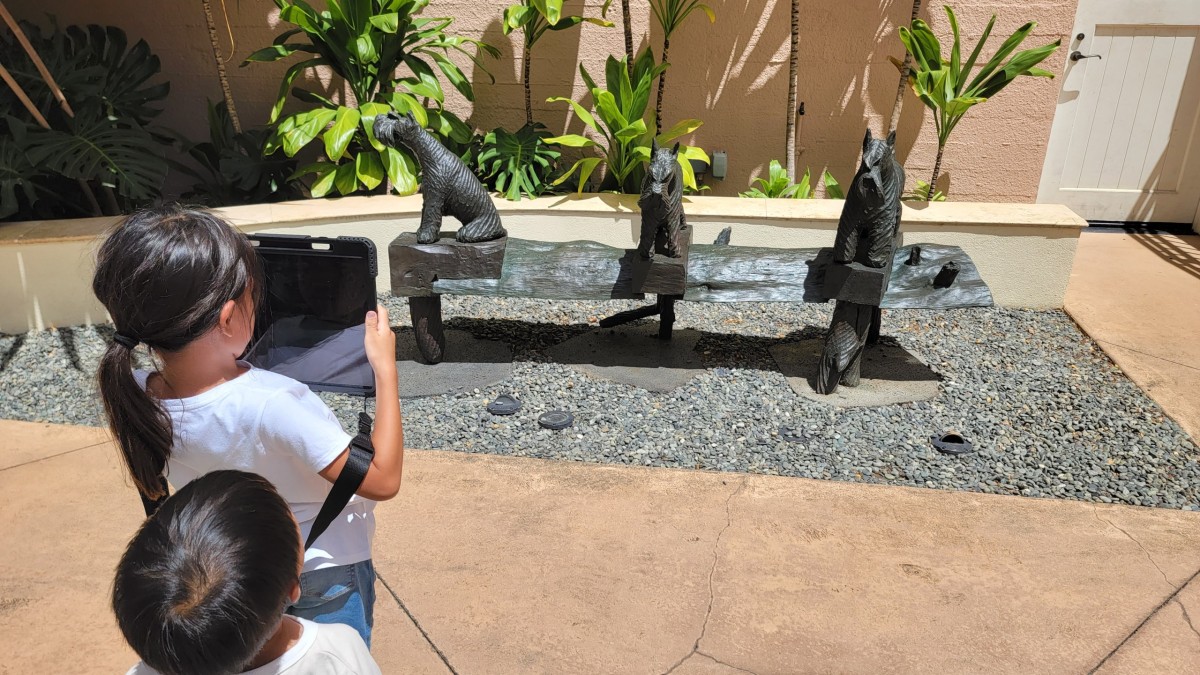 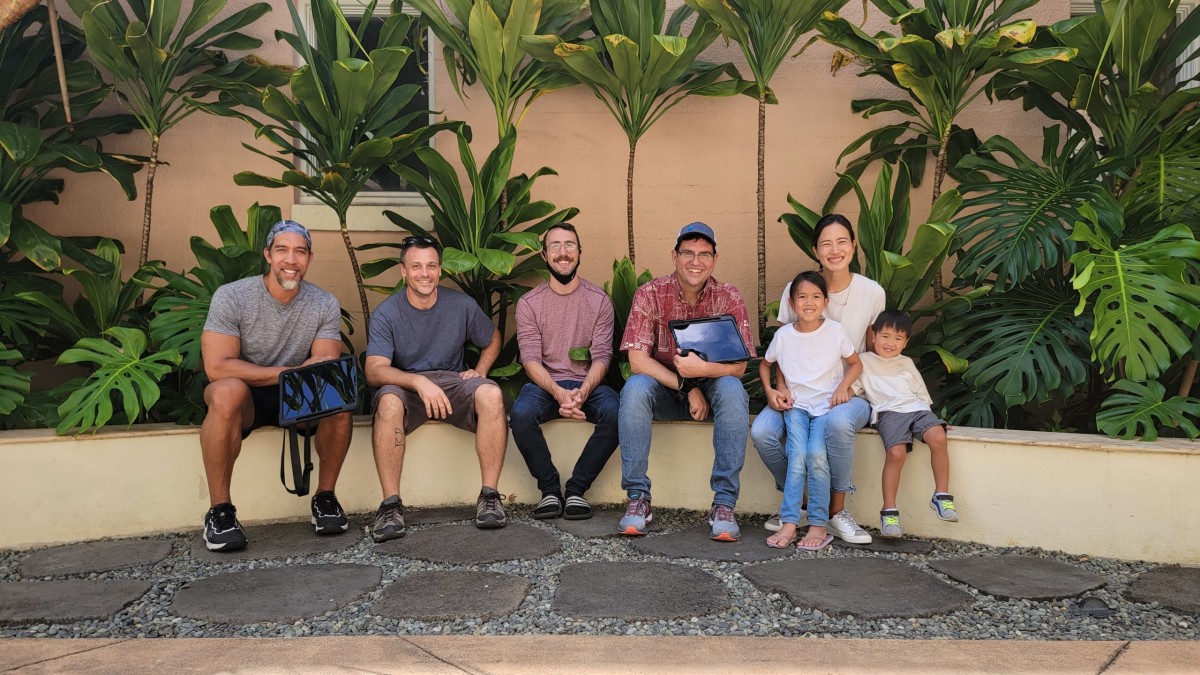 ʻImi Ā Loaʻa: Search and Find will be at the museum indefinitely. Eric Johnson, artistic director at the Hawai‘i Theatre for Youth, says the plan is to eventually move it to a new location in the museum to keep things fresh.