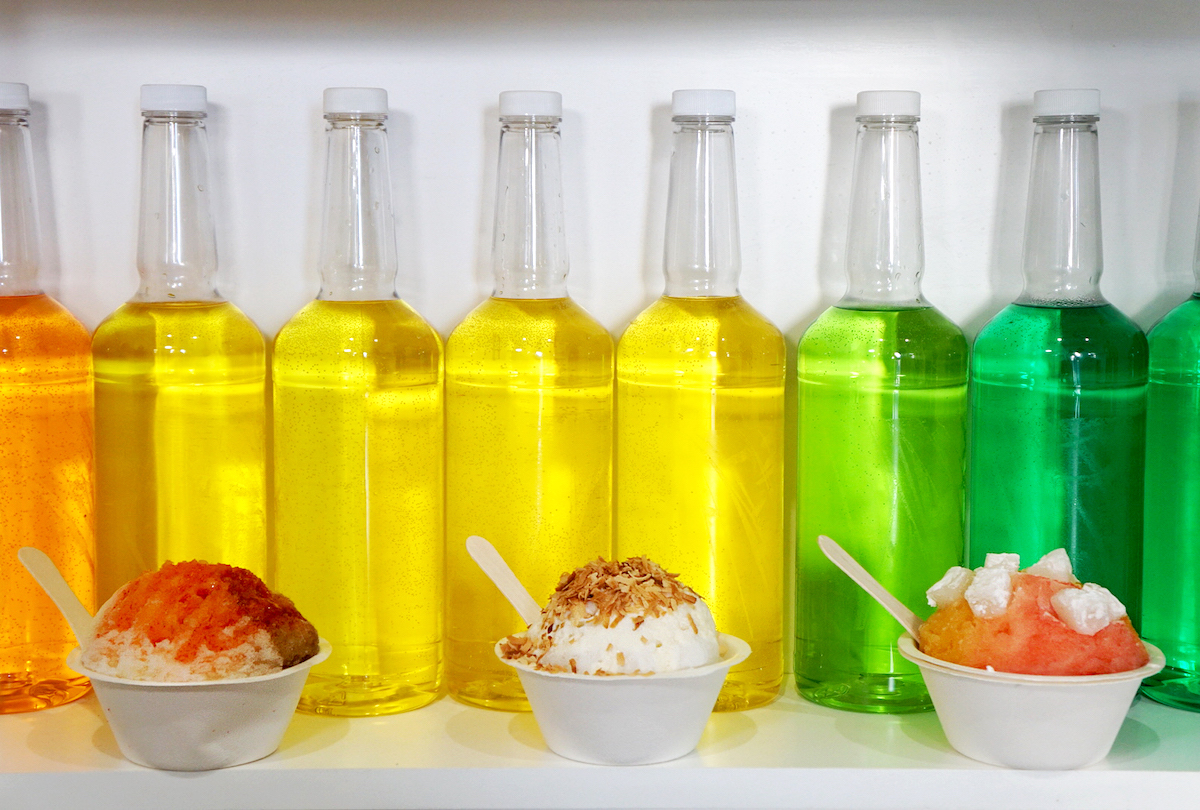 Locals on every island have very strong opinions about their favorite shave ice spot, and Ululani’s Hawaiian Shave Ice is undisputedly the top choice on Maui. Tomorrow, Jan. 20, they’re opening on O‘ahu, which will heat up the competition in the ice games.

Ululani’s is popular for many reasons. Their ice is super fine (not everyone’s is, you know) and their syrups are homemade—some with fruit in them have up to 33% real fruit purée. They also have an extensive menu of flavors, ranging from the basic strawberry and vanilla to wedding cake and green tea, all the way to the super local pickled mango, tamarind, wet lemon peel and li hing mui.

The ice cream is on another level, as well: Since they are from the Valley Isle, they don’t just use Maui-based Roselani Ice Cream, they use Roselani’s top-tier “gourmet” line, which is extra creamy and tasty.

When you order, I would highly recommend you expand your horizons and try something new. I’m a purist, so until I started blogging, I’d normally order strawberry shave ice with vanilla ice cream at most shave ice places to measure the gold standard. Then I began leaning toward exciting combinations and new flavors, which make for nice photos. 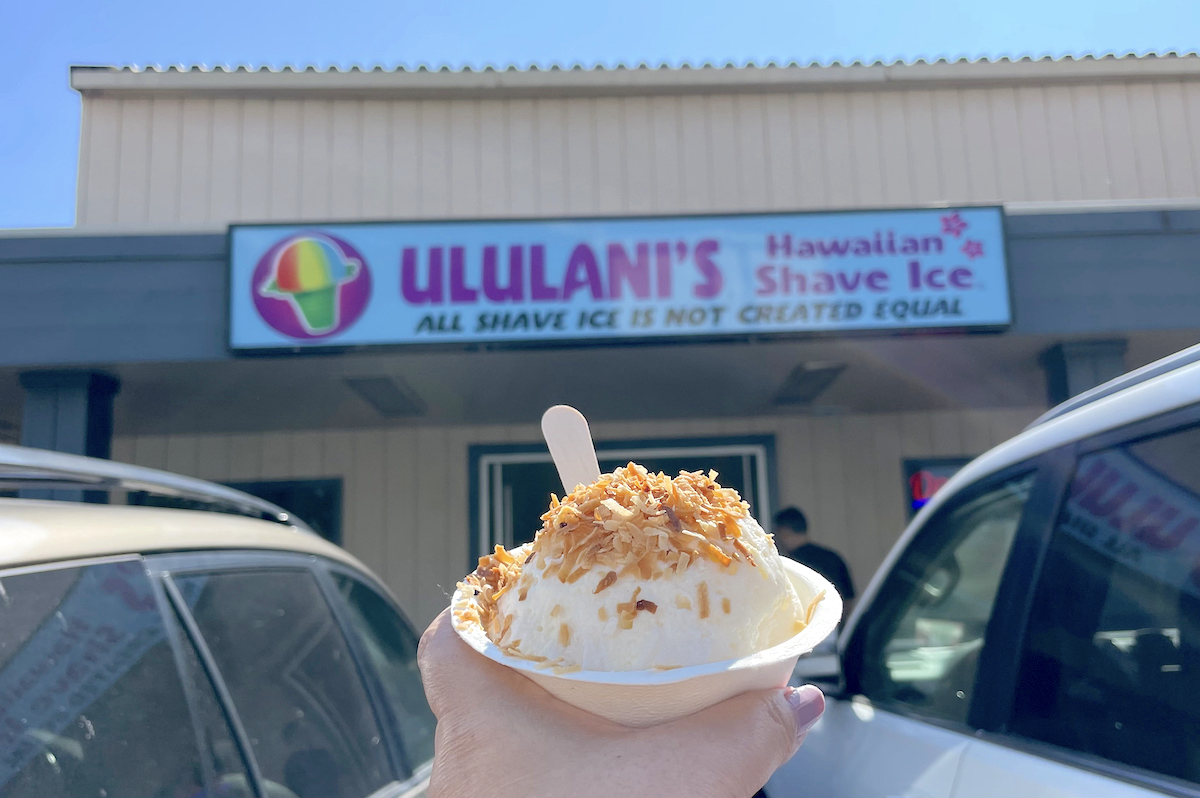 So it never occurred to me to order Ululani’s Haleakalā, a monochromatic mound of macadamia ice cream covered in haupia and leche shave ice and toasted coconut. It’s right there at the top of the menu. That should give you a hint. This thing isn’t just shave ice, it’s an actual dessert. The different levels of creaminess and cold are delicious on their own, but the homemade coconut flakes—which are crunchy, sugary and toasty—make it crazy addicting.

I have been eating shave ice all my life, so I know better. But the Haleakalā was so good, I was gripped by brain freeze in a matter of seconds. You will be, too.

After several years of enjoying (and writing about) Ululani’s, I only just got to meet owners Ulu and David Yamashiro in person yesterday. They are from O‘ahu, and after getting married, they moved to the Pacific Northwest and were surprised to see long lines for snow cones, which are more like flavored gravel. So in 2003, Ulu opened her own Hawai‘i-style shave ice company there, called No Ka ‘Oi Shave Ice. She had to separate from her mainland business partners when she moved back to Hawai‘i in 2008 to be closer to her mom, so she opened on Maui under her name to make it clear she was on her own. 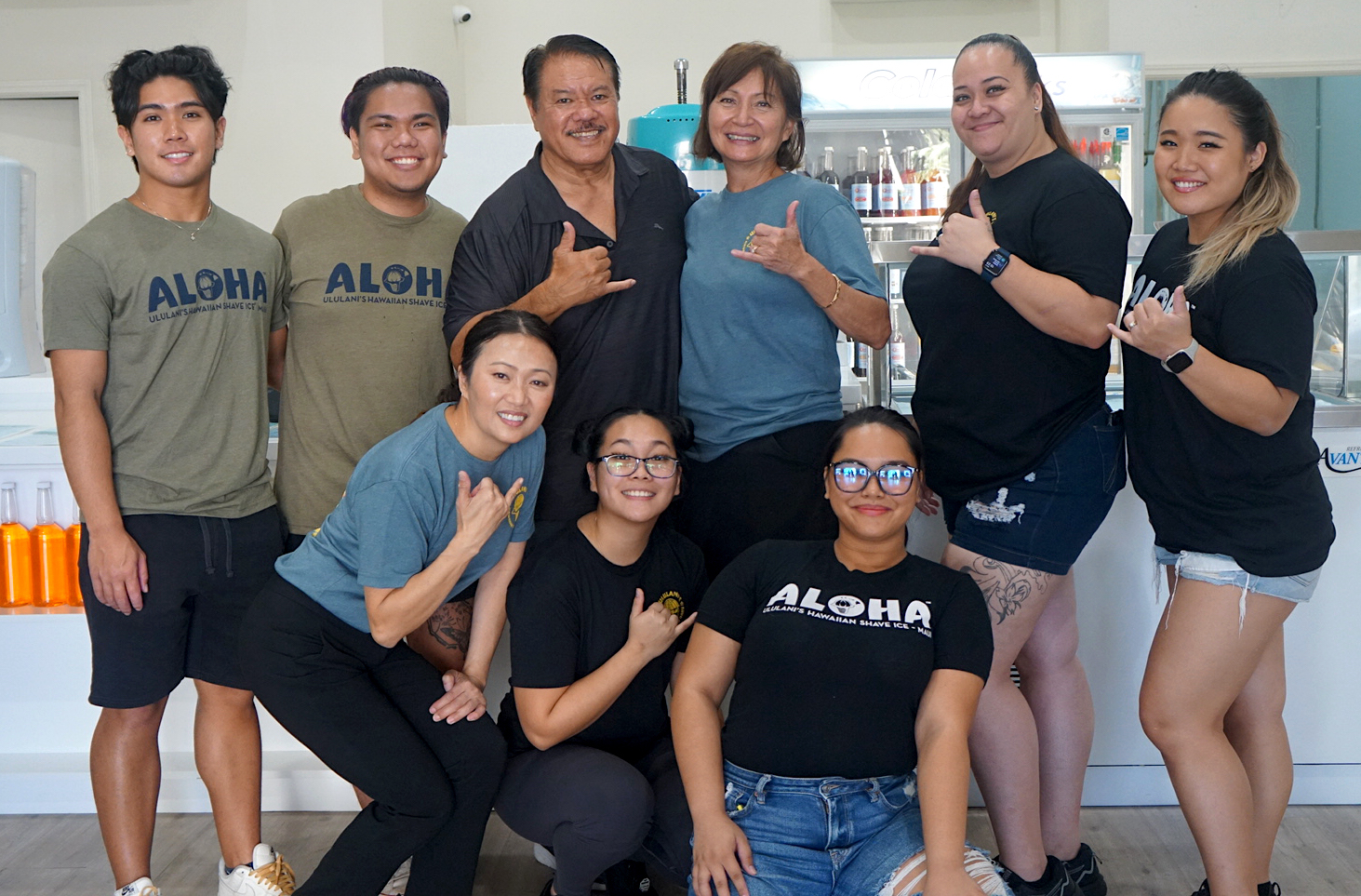 Fast forward to 2023: The Yamashiros have been franchising for several years, and Ululani’s Shave Ice now has six locations on Maui, one in Kailua-Kona, one in Hollywood, and as of Jan. 20, one in Honolulu. This franchise owner is Jamie Wong, who hopes to open more Ululanis in Waikīkī and Kaka‘ako. The Yamashiros say their next franchisee is opening in Waimānalo.

But there’s more! More Ululani locations are opening in Stockton, Santa Barbara and Livermore in California; Austin, Texas and the Gulf Coast of Florida. It won’t be long before the world knows about shave ice the way they know about poke bowls.