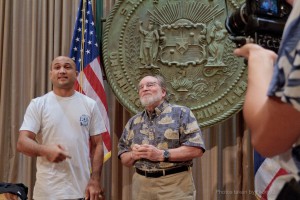 Photo by Ricky Li, Office of the Governor

In what was intended to be just a photo op between Gov. Neil Abercrombie and BJ Penn, the groundwork was laid for possibly bringing a UFC event to Hawaii. All local fighters, including former UFC lightweight and welterweight champion Penn helped to make MMA one of the fastest growing sports not only in Hawaii, but all over the world. There has always been speculation of a UFC event coming to Hawaii, but for one reason or another, it has never come to fruition. Perhaps now with the backing of Abercrombie, Hawaii could soon host the first of what could be many UFC events.