Created as a site of beauty, it helped soothe the queen through her imprisonment and even became a way to sneak in information; and was destroyed as a symbol of love for Hawai‘i’s last monarch.

In mid-February, flowers will rain down on ‘Iolani Palace. The digital images of blooms from Uluhaimalama will mark the opening weekend of the Hawai‘i Triennial 2022. Artist Jennifer Steinkamp pulled the list of flowers from Lili‘uokalani’s written inventory of the more than 70 varieties planted in her garden and those who donated them (see below). The queen designated some of her land near Punchbowl in 1891 to create the garden so the monarchy could grow flowers for celebrations. The site is part of the story of joy and sorrow of her reign.

About a year and three months after designating her land for the garden, the Hawaiian Kingdom was attacked and overthrown. While Lili‘uokalani tried diplomatic measures to fight off the business owners aligned against her, on July 4, 1893, Sanford Dole proclaimed himself president of the Republic of Hawai‘i. A year later, the queen planted the first tree in her garden. Here is more pulled from the National Register of Historic Places registration form as it appears on the Historic Hawai‘i Foundation’s website: 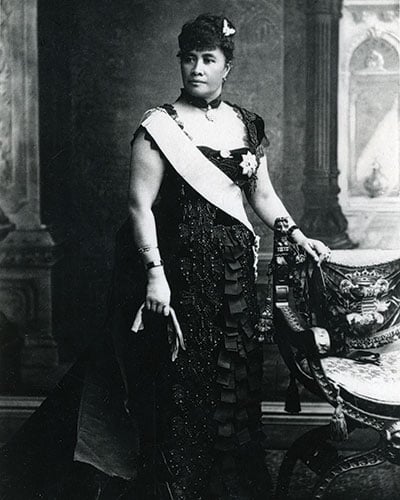 “Due to the fact that public assembly for Hawaiians had been outlawed by the new government, Queen Lili‘uokalani came to Uluhaimalama on the 10th of October to make the first symbolic planting. The Queen gave ceremony to the place with only a few attendants with her to assure no resemblance of illegal assembly existed. The name chosen for the garden was ‘Uluhaimalama’, allegorically ‘As the plants grow up out of the dark earth into the fight, so shall light come to the nation.’ On the night before the great event the Queen planted at the entrance to the garden a bed of small shrubs in a design that spelled ‘Uluhaimalama’.”

A day later supporters of the queen added to the site.

“Beginning at 9:00 AM many elegantly dressed, and prominent Hawaiian women came to the garden to place a new plant at Uluhaimalama. The event was also attended by a few Hawaiian men which included Prince Jonah Kuhio Kalaniana‘ole and Prince David Kawananakoa. The Royal Hawaiian band also came to provide music for the event. … The planting also provided a symbol of hope for the future for the people of Hawaii that they would have a vibrant, living legacy for their lives and for the lives of future generations. According to the 15th of October, 1894 edition of the Hawaiian newspaper Ka Makaainana, all the people gathered and sang a song entitled ‘Liliuokalani’. Then Prince David Kawananakoa planted a lehua tree (by other accounts it was a yellow ohi‘a lehua sapling) in a place where it was surrounded by the waterfall (the stream adjacent to the garden must have allowed for a natural waterfall to be in the center part of the garden in 1894). The tree was planted in the center of the garden to represent Queen Lili‘uokalani; the tree was then blessed. As Prince David Kawananakoa planted the tree, an old Hawaiian chanted ‘This is the Heavenly One. May the gods protect her as she protects her people.’ 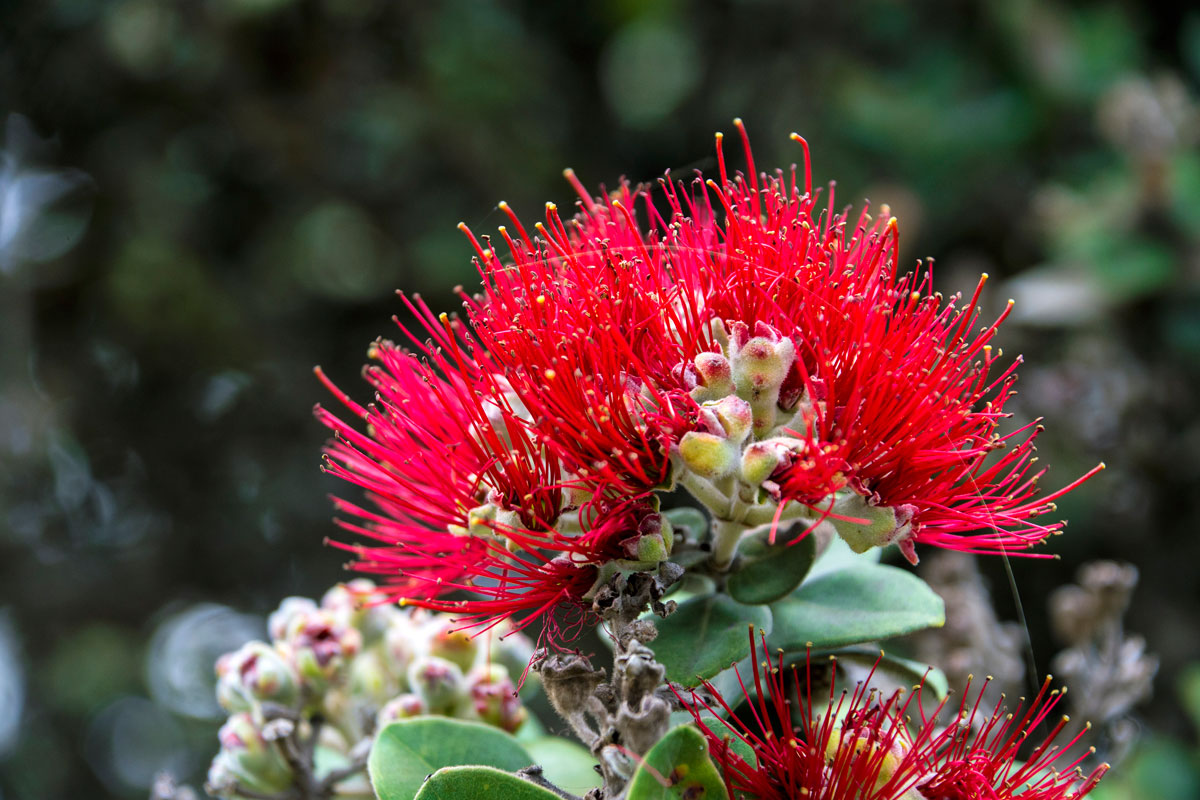 “Then individuals came and planted native Hawaiian plants in a circle around the lehua tree to represent a circle of love of the people for their queen. Queen Lili‘uokalani was not in attendance at the event. Her presence may have caused a reactionary response from the new government if she had been in the presence of so many Hawaiians at one time in a public place.

“Some of the plants included a kou, a hala polapola, kukui, ‘awa, papa‘a sugar cane, kea sugar cane, uhaloa, popolo, and ‘ape. With each planting a chanter chanted a verse. Some of the verses were of honor and blessings; others were more ascerbic towards those that had caused the Queen so much grief. Examples recorded are:

Another account published in the 1958 book, An Island Kingdom Passes: Hawaii Becomes American by Kathleen Dickenson Mellen, relays a description of the tense atmosphere surrounding the gathering. “Suspicious, government police lined all roadways to the park on the following morning, but only a small group of Hawaiians arrived, led by their National Band. The queen was not among them. Each Hawaiian wore a blue satin hat-band lettered in gold ‘Uluhaimalama’ as did the natives throughout the city. Soon scattered groups appeared on the hillside opposite the garden site, others strolled slowly along the roadway, seemingly oblivious of what was taking place, but keeping a watchful eye on the police to avoid arrest under the law forbidding assembly.”

Lili‘uokalani was arrested and imprisoned on Jan. 16, 1895. Allies would bring flowers to her at ‘Iolani Palace, some picked from Uluhaimalama, wrapped in newspapers as a way to smuggle in news her captors denied. Her death in 1917 reignited her supporters anger against the government. According to the historic register form, territorial leaders destroyed the plants and place that symbolized the queen. They turned her garden into a cemetery. 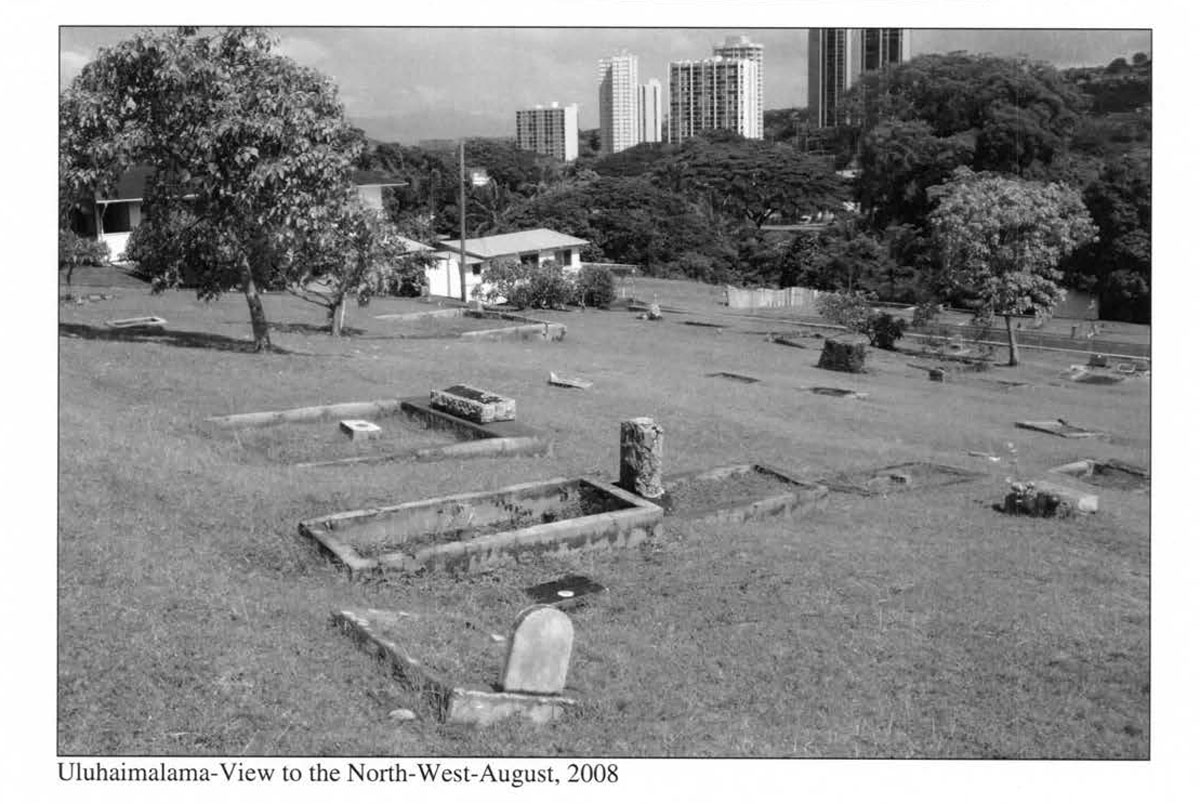 A photo of the site from the National Register of Historic Places nomination form for Uluhaimalama.

But the garden site is still there, identified by a marker in the ground in Pauoa Valley bordered by the Pauoa Chinese Christian and Yee King Tong Chinese cemeteries. The nonprofit Uluhaimalama Cemetery Association is working to restore parts of it.

Here is the list of many of the flowers (and donors) for Uluhaimalama from Lili‘uokalani’s inventory, which is stored in the state archives:

You can read more about the history of the garden and its site by downloading the National Register of Historic Places registration form from the Historic Hawai‘i Foundation’s website, historichawaii.org.